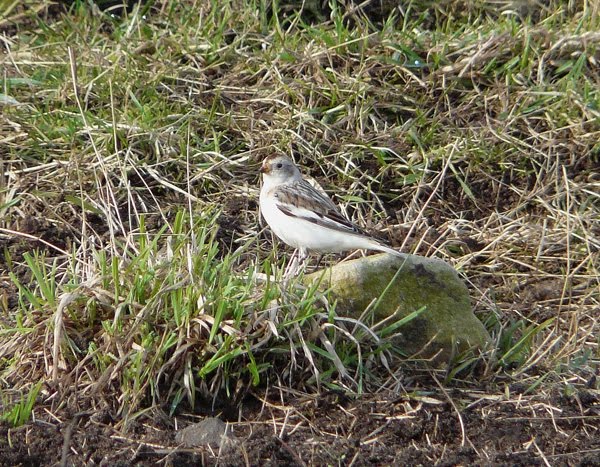 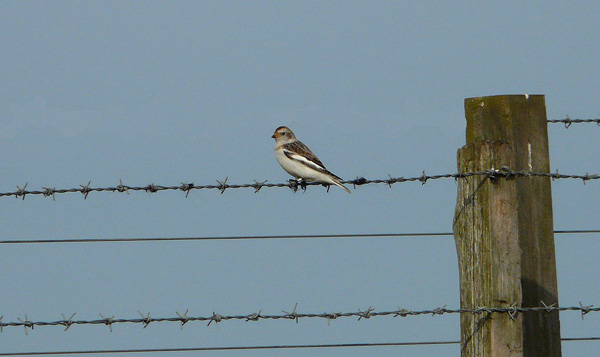 This lovely white male Snow Bunting showed well near the cattle feed at Low Steads, Longhoughton. You can see its ringed on its left leg... 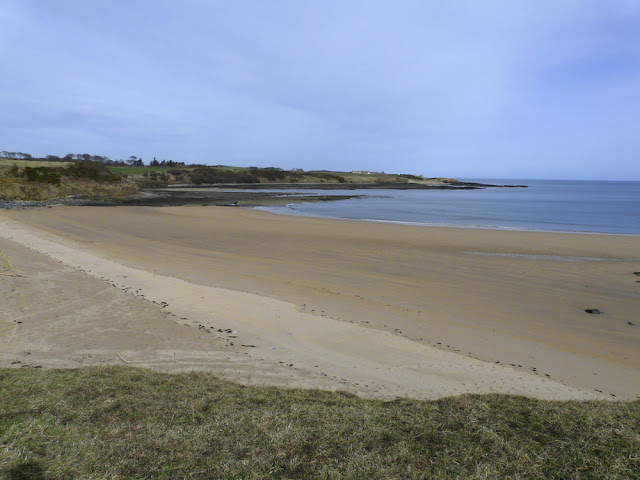 The WeBs count area. 10am on a Sunday, the beaches are their usual crowded selves... The headland is Howick Haven and Rumbling Kern, with Seahouses Farm viewed from Sugar Sands.
It was cold and frosty last night so I didnt bother with the moth trap and headed out early to do Julie's WeBs count from Howick Burn to the Fishing Boat Inn, Boulmer. I thought it was due this week but I'm actually a week late. ( Sorry Julie). The morning was nice and clear with only a light SW breeze.
Still, the birds showed little signs of spring other than 2 Chiffchaffs, one singing in Howick Dene, the other in the cliff buckthorns. Some nice birds were noted but none new for the OFFH list. -
Merlin 1 female sat out on a small hawthorn after I flushed it off a fence post. It looked well in the scope but too distant for a photo.
Shelduck 9
Goldeneye 3
Eider 32
Redshank 51
Oystercatcher 36
Grey Plover 3
Curlew 110
Turnstone 7
Purple Sandpiper 3
Knot 10
Dunlin 44
Bar tailed Godwit 6
Sanderling 9
Lots of Linnets were around including groups of 25 and 40, Meadow Pipits and Skylarks were song flighting from territories, 2 Buzzard were over the dene, 10 Yellowhammers and a Reed Bunting were near Seahouses Farm. The male Snow Bunting above, was with a few Linnets and Pied Wagtails in a cattle feed area at Longhoughton Low Steads, seen both on my way and on my return.
I think that the April count will show a lot more changes...
This afternoon I planted out 10 Hazel saplings into my garden where my first Bumblebee of the year was on crocuses....
Posted by Stewart at 8:53 pm

Stewart ,
It must be a real chore having to do your birding in an area like that .
Great Snow Bunting shots .

Greenie - Aye its a hardship but someone has to do it ;) Cheers.

Emma - One of the most scenic spots on our coast...Cheers.