A short walk this evening in our tiny village wood found 12 male Gold Swifts doing their pendulum display dance along the rides. There were two groups with 6 in each, but they didnt find me a female....This is a scarce moth here so I'm pleased to find them at this spot each year. It is only one or two hundred yards from my garden but I've never caught one in my trap...

What a lovely day to sit around the garden today. Jane is away to Newcastle with friends so I've pottered around cutting the grass and taking some pics...

Above - This is our 'no mow' bit of lawn, its full of Cats Ear, Clover, Daisies and some Bugle. 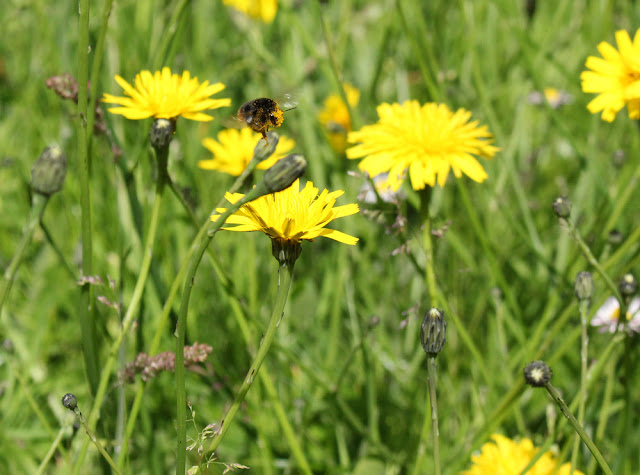 This Red tailed Bumblebee is doing a good job pollinating the flowers. 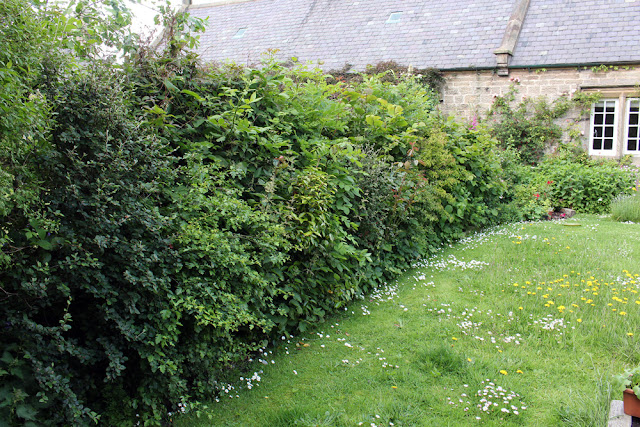 Above - Our hedge. We planted this from odds and sods and its coming along well. It has held Barred Warbler in the past ( have I mentioned that before?) 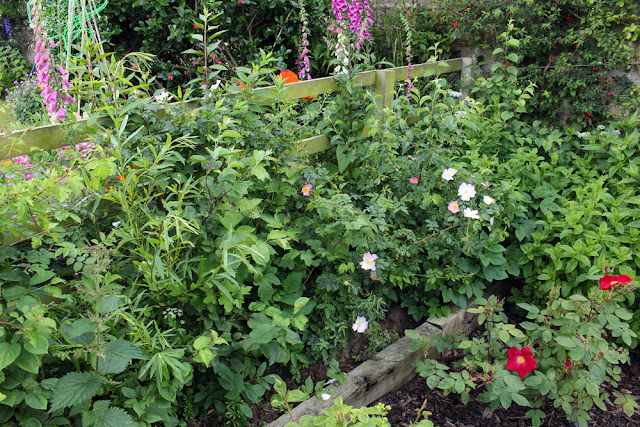 Above - This is the far end of the hedge in the other shot. Just planted a year ago, the dog roses are flowering for the first time this summer. 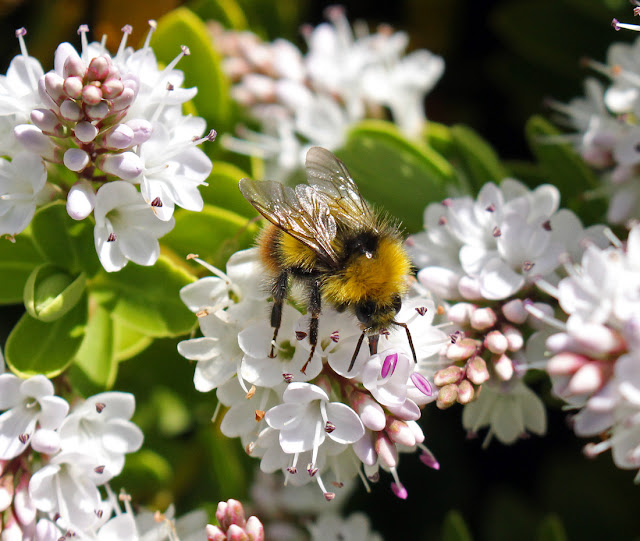 Above - The hebe is covered in bumblers, including Early Bumblebee ( above), Tree Bumblebee, White and Buff tailed Bumblebees and Common Carder Bee.

But a real exciting bit happened as I was cutting the grass. This Sparrowhawk dived through my neighbours shrubs and emerged witha juvvy Starling to eat on the lawn!

I was out of its line of sight behind the sweet peas so I dashed inside, grabbed the camera and stalked carefully back to get some shots before it flew off, taking its meal with it. Lovely! 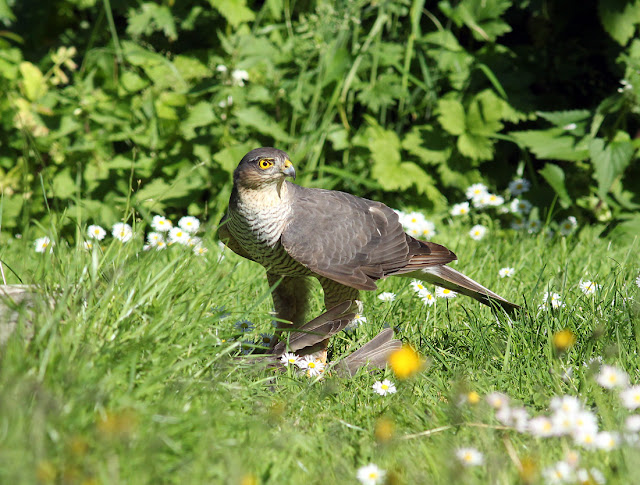 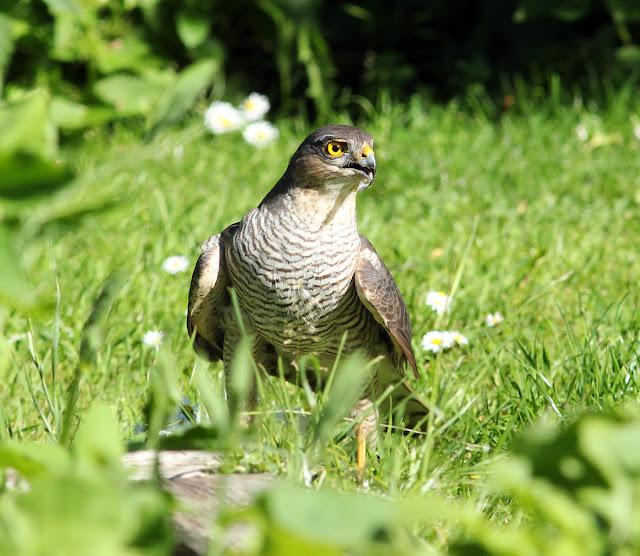 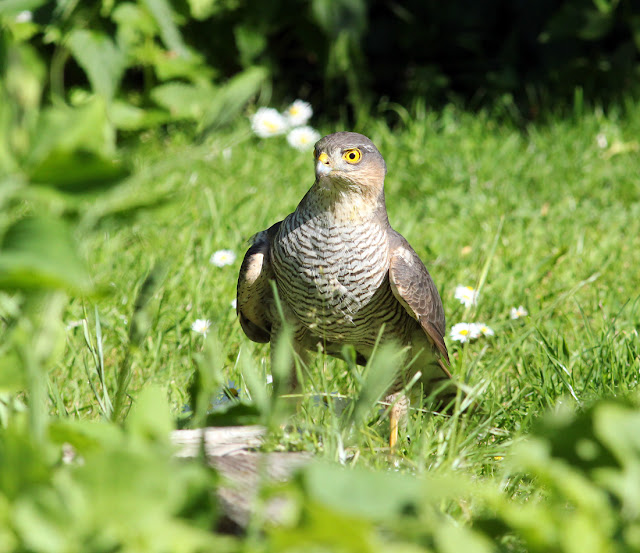 On Sunday I met up with John at the Warkworth Beach Car Park. First thing it was sunny and pleasant but this soon deteriorated into dull cool and some spots of rain.

A wander down the old water towards the estuary was very quiet for birds, the only highlight being a particularly violent Carrion Crow that caught and killed a juvenile Black Headed Gull, in flight, and 3 Little Egrets.

A few young birds were in the scrub, Chiffchaff, Robin, Mistle Thrush etc.

As it was slow going we decided to check out some flowering plants in the dunes, but even this was stymied by the overcast conditions. Will we ever get a summer I wonder? 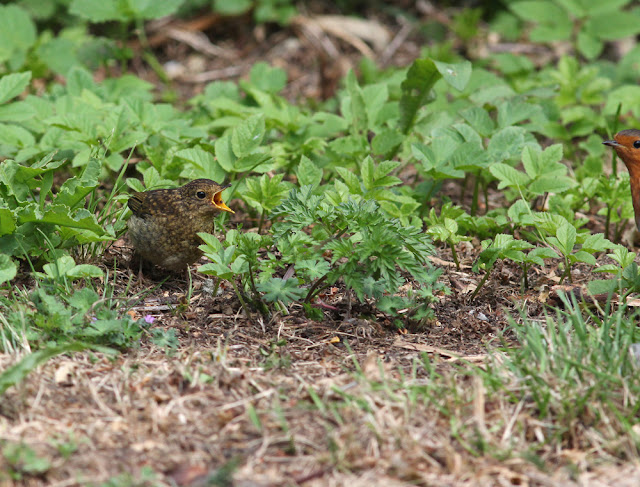 Whenever we visit this part of Scotland we like to have a day trip over to Tobermory on the island of Mull. We take the small roll on roll off ferry from Kilchoan as foot passengers and have a stroll around the picturesque harbour at Tober.

Kilcoan is a very remote part of the world, so much so that a barman in Tobermory said to us, 'Its like London over here compared to there!' Maybe not quite, but Kilchoan is quite out of the way, its probably easier to do your shopping after this ferry trip than to drive over to Fort William.

On these trips we are generally lucky with the weather and this year was no exception, being sunny, but cool.

Almost as soon as we stepped on to the ferry, Jane noticed a bird coming from behind me and pointed it out. It was a nice adult White-tailed Eagle, very close. By the time I got the camera out, the bird was going in an opposite direction to the ferry, it was just a speck, but soaring right over where we had left the car! Bugger.


Well thats enough of the holiday snaps for one trip, what with small parties of Curlews arriving to the fields next to home, you know whats just a short few weeks away...
Posted by Stewart at 8:17 pm No comments:

During the week away, we made a couple of visits up to Ariundle Oakwoods to look for butterflies. This is a lovely spot with some ancient atlantic oak wood still left hidden behind some younger forestry type planting. Unfortunately during the time of our visits, butterflies were quite scarce. It was sunny at times but often breezy and cool. 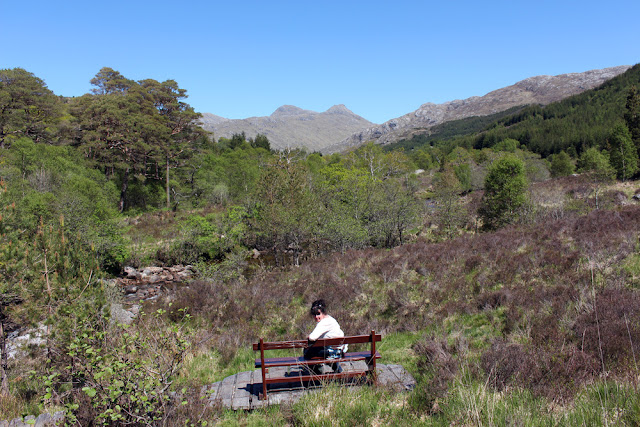 While checking a spot nearby for Marsh Fritillary, we came upona single Narrow-bordered Bee Hawk-moth nectaring on Bluebells. It looked a bit like a Hummingbird Hawk-moth but the clear black lined wings on the orange and black striped body were very distinctive. Face on it looks like a mini red-legged partridge! 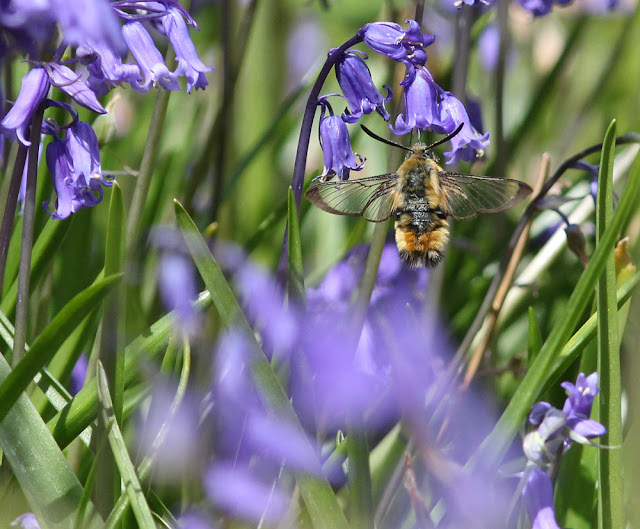 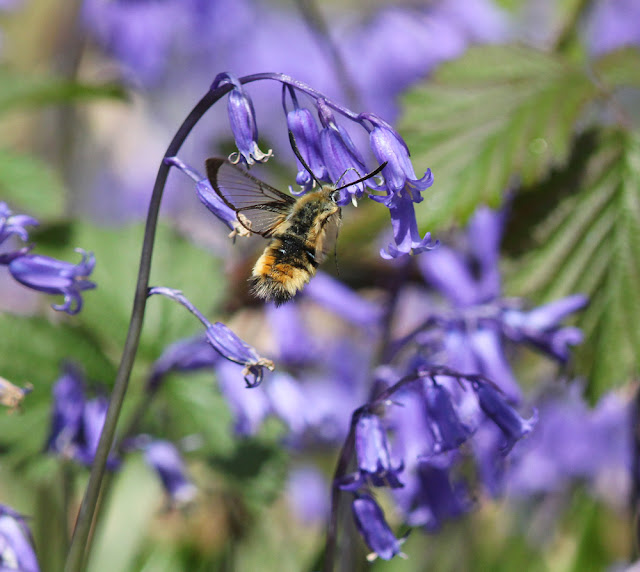 Down in the woods, there were no Pearl bordered or Small Pearl Bordered Fritillaries, but a couple of Chequered Skippers took advantage of sheltered sunny spots along the main path to forage. I see these nice little butterflies most times we visit the area but never tire of them. Great little things...
Along the path side, a few plants in flower including Cow Wheat, Bluebells, Stichwort and a new one for me, Marsh Violet.

[Hello all. If you have already read this edition prior to Sunday 14th June, please accept my apologies. This was a 'lazy' post, and I'm going to change it.]

We have just returned from a week away up to our regular haunt in Scotland, the Ardnamurchan. The house we have stayed on on four occasions now, again came up with the goods. We had a great week, filled with clear blue skies and sunshine, all be it, a bit cool, but as long as the rain stays away, its a bonus!

There are too many highlights to write about this week, so I'll let the photo's do the talking...

We arrived at Acharacle last Saturday afternoon in strong winds and heavy rain. The landscape looked about as uninviting as it possibly could, but the weather forecast for the next five days seemed to be improving slightly so we weren't too despondent.

Our cottage was just as we left it on our last visit in September 2013 and long may it stay so. It has an old fashioned quiet charm inside that instantly makes you feel at home in a peaceful, remote landscape.


We bought some bird seed and nuts a local shop ( I must bring my own mix next time as the stuff available locally was mostly corn rubbish) and stocked up the feeders at two bird tables, front and side. They were soon frequented by familiar garden residents, but family parties of Siskins and some wild Rock Doves and Hooded Crows indicated that we were further away from Northumberland than usual. A bit of small bird activity under the shade of some beech trees in the garden soon revealed the presence of a Chiffchaff nest with young.

One morning I got up and looked from the kitchen window to find a Red Deer stag standing on the lawn! I have no idea how he got in or how he left the scene as the land is well fenced and hedged off from the moss.

Each time we visit, we hope to catch up with the elusive Pine Martens that live nearby. In 2007 we had some nice views of two, in 2010 we had one glimpse and in 2013 no sight at all. We were not disappointed in 2015's showing.

From Saturday to Tuesday the jam and bread was removed from the bird tables and ground during the brief hours of darkness leaving us a tad frustrated. So, on Weds morning I got up at 5.30am to replenish the missing food, after only putting out a small amount on the evening previously to attract attention.

I sat glued to the kitchen window, camera in hand until by 9am a robin was developing a taste for raspberry jam. No sign of the mystery mustelid. It was time to let Bunty out into the garden for her morning ablutions. As she left the side door I heard and saw a scrabble of gravel on the drive and a tirade of yapping from the trusty dug. I jumped around the corned to see the Pine Marten legging it across the lawn, tail spiralling like a helicopter with Bunty in pursuit! A sharp yell from her master put paid to the chase and all I was left with was the rattling of rhododendron bushes as the poor creature escaped. It had been below the kitchen window all along...

Surely that was the end of our chances this week, no sensible marten would venture back in daylight after that happened....

I then thought I would try my luck by constructing a temporary marten table near the side bushes where he might sneak out for a sweetie snack in the knowledge that cover was a leap away. I replaced the bait at 10am and we went out for the day.

On return at 5pm the bread was still untouched, even the robin didn't fancy it. I just left it be thinking our mate would take it over night if at all.

By 8.30pm I wandered back into the kitchen for a top up and to do the dishes when I took a casual glance out the side window. No bread! Little sod had been in  while we were eating and taking the loot. Right, get some more out straight away.

I left it unchecked until about 9.15pm. When I looked I was over the moon to see a small pointed face peering out from the side of the bushes, and called Jane and Lillian ( my sister in law was staying with us for one evening) for a look...

This pattern kind of continued on Thursday and Friday too with the Pine Marten showing best on Friday at 8pm. What a star, even though he was only on show for a few minutes at a time, it was a great pleasure to share a meal with him. Tremendous, Pine Martens are just the dogs danglies.... 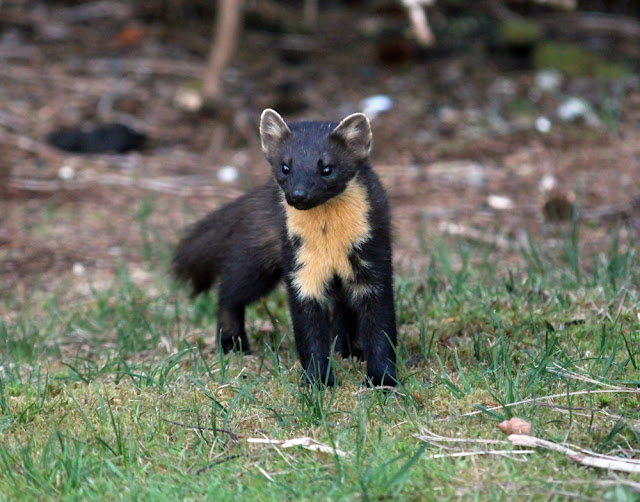 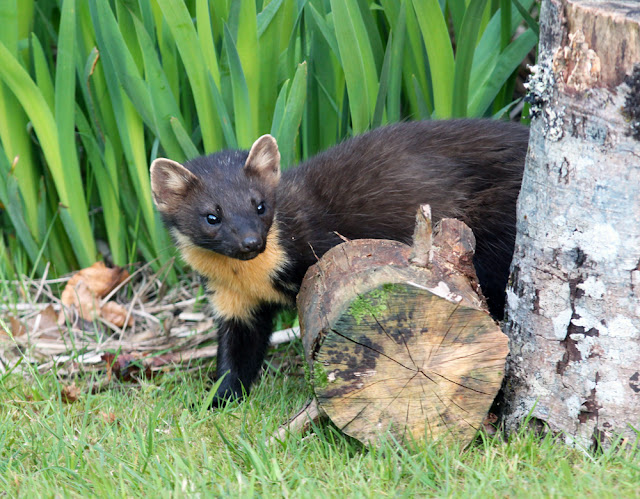 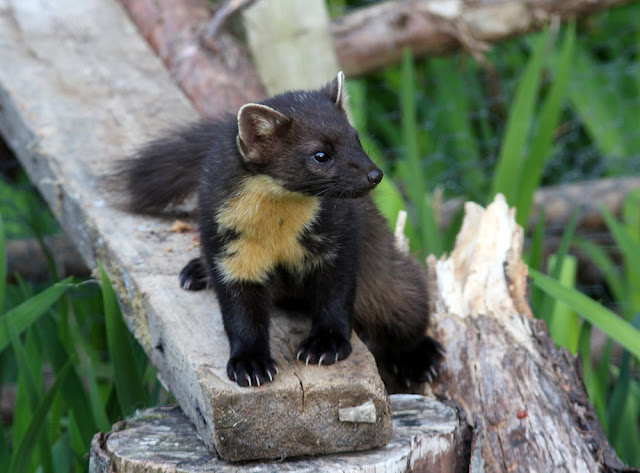 Around the house is Kentra Moss and Kentra Bay (below). Its a great area for wildlife with Otter, Red Deer, Raven, Greenshank etc all seen.