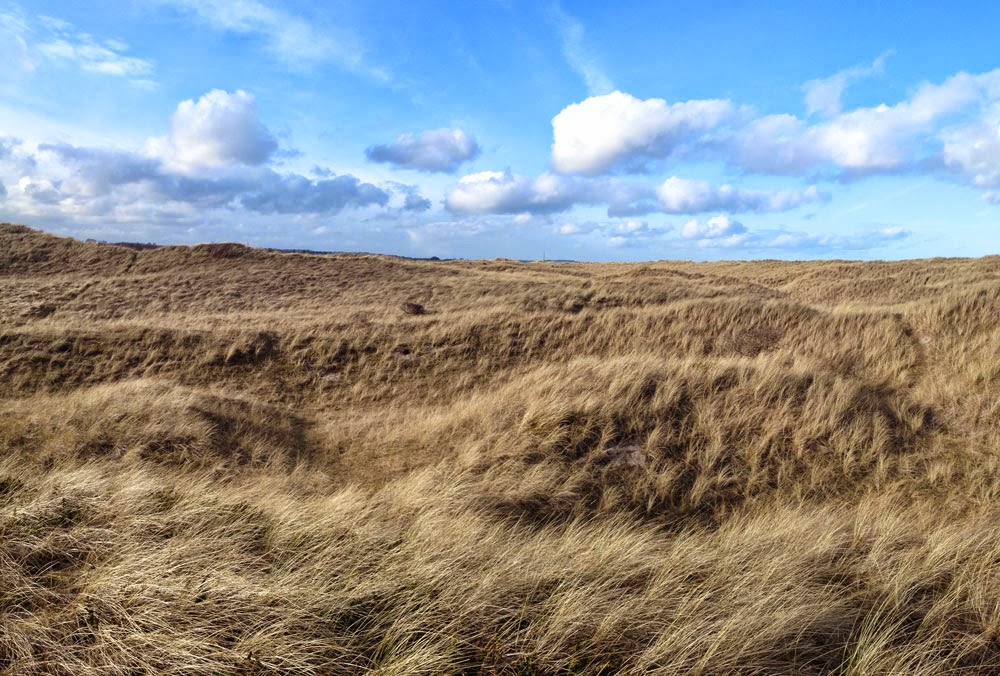 An afternoon at Warkworth watching three Short-eared Owls on the dunes. Always flighty, they were still nice to see having become ever more scarce in recent years. 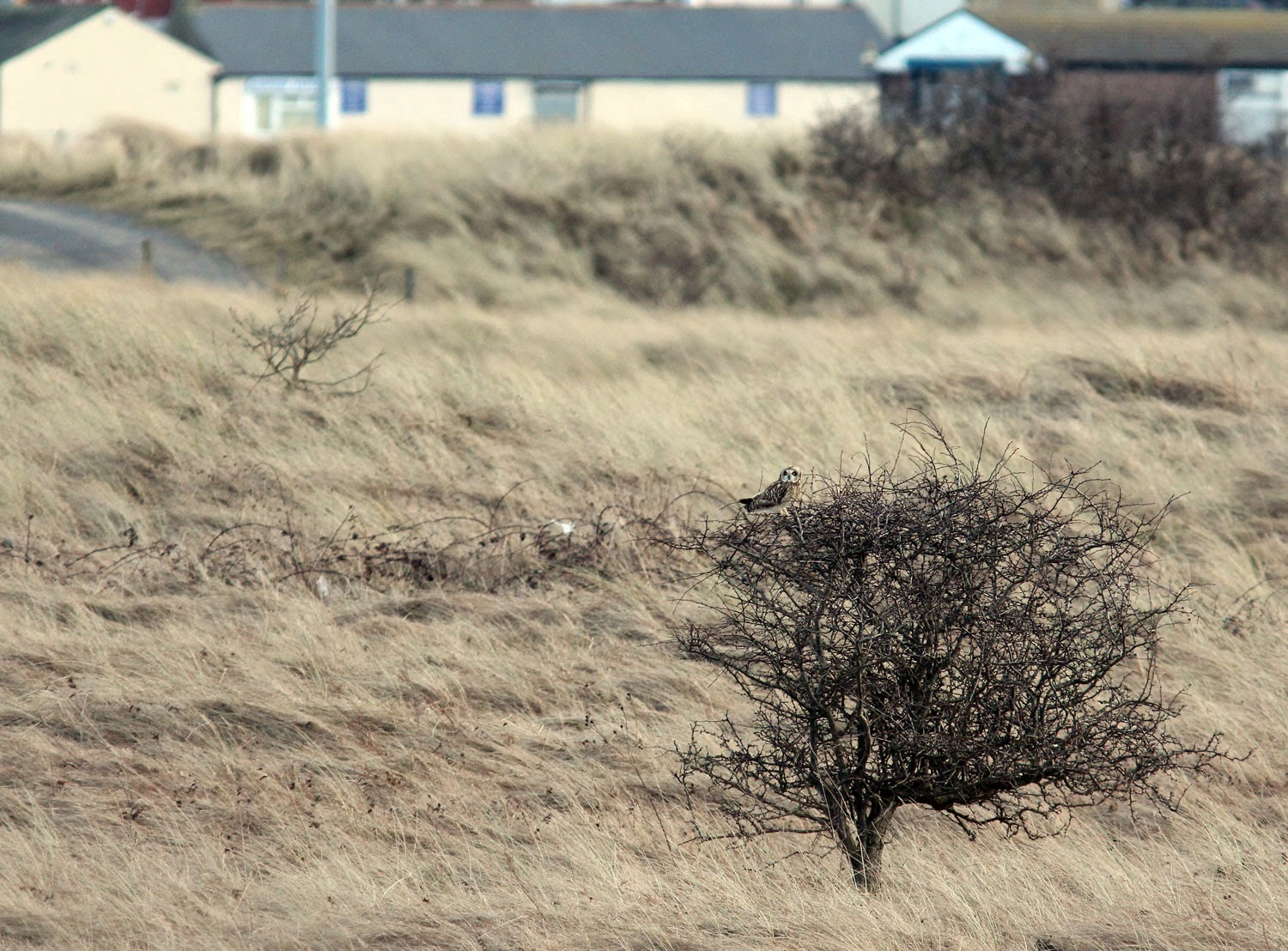 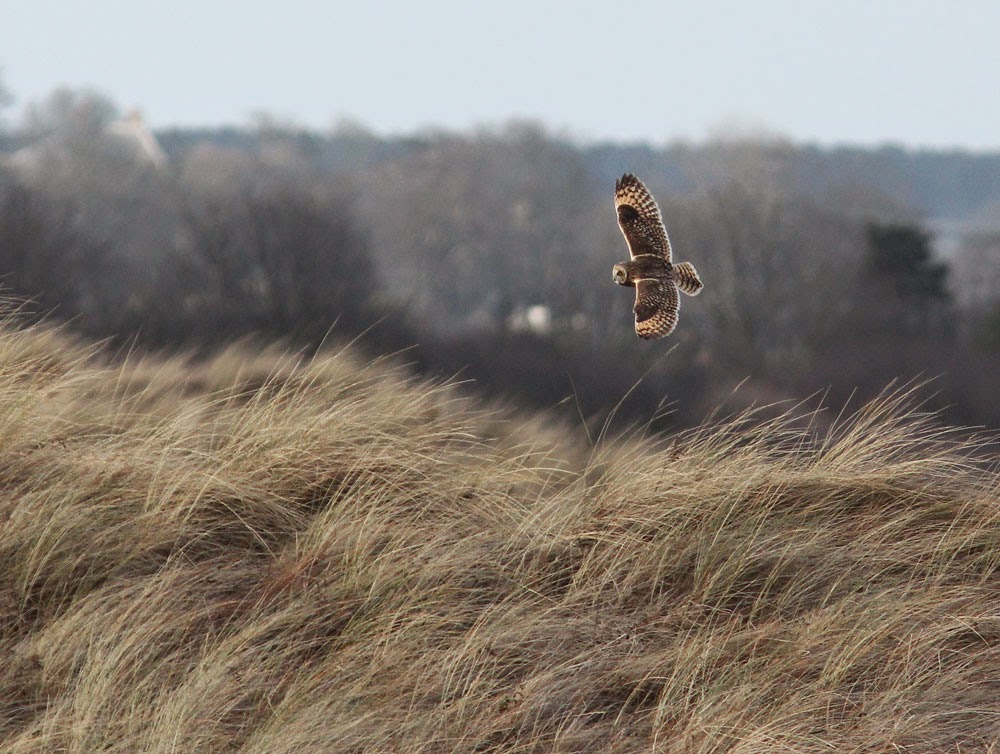 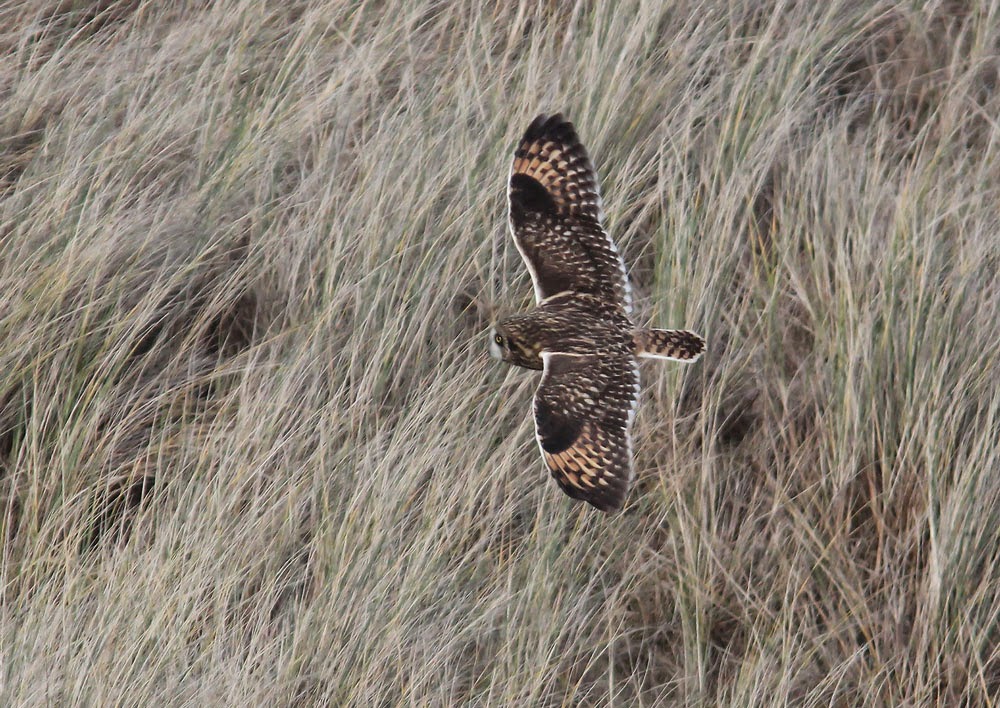 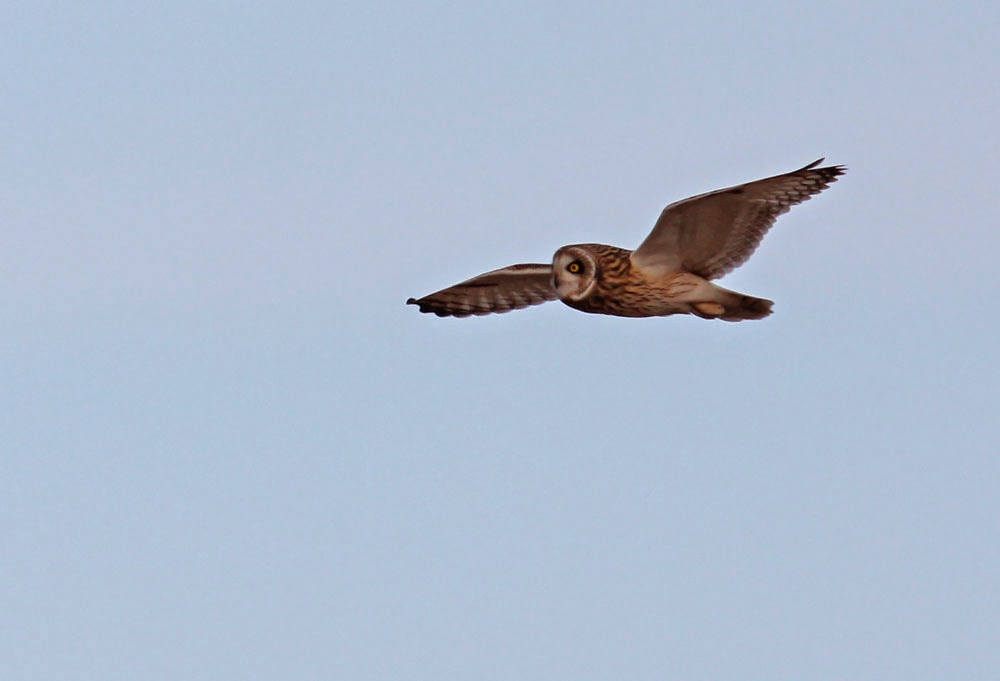 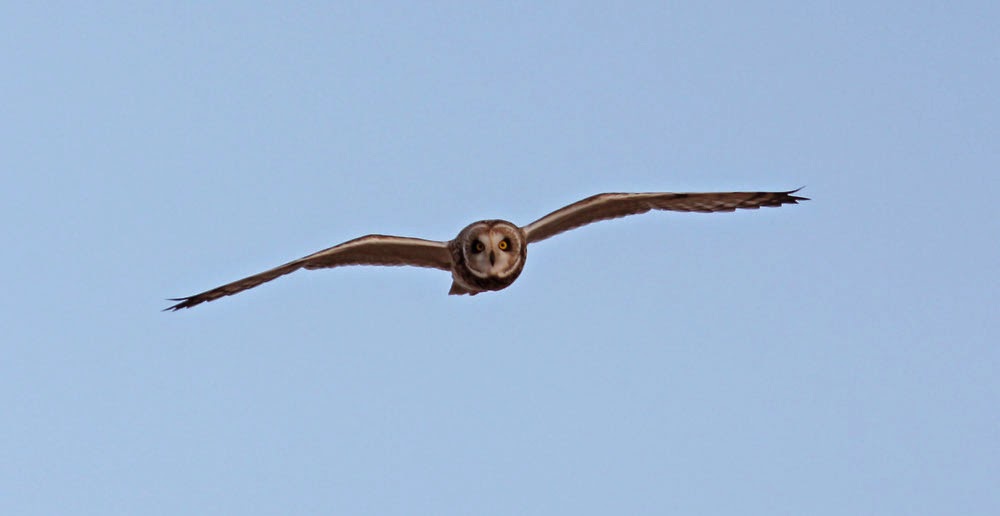 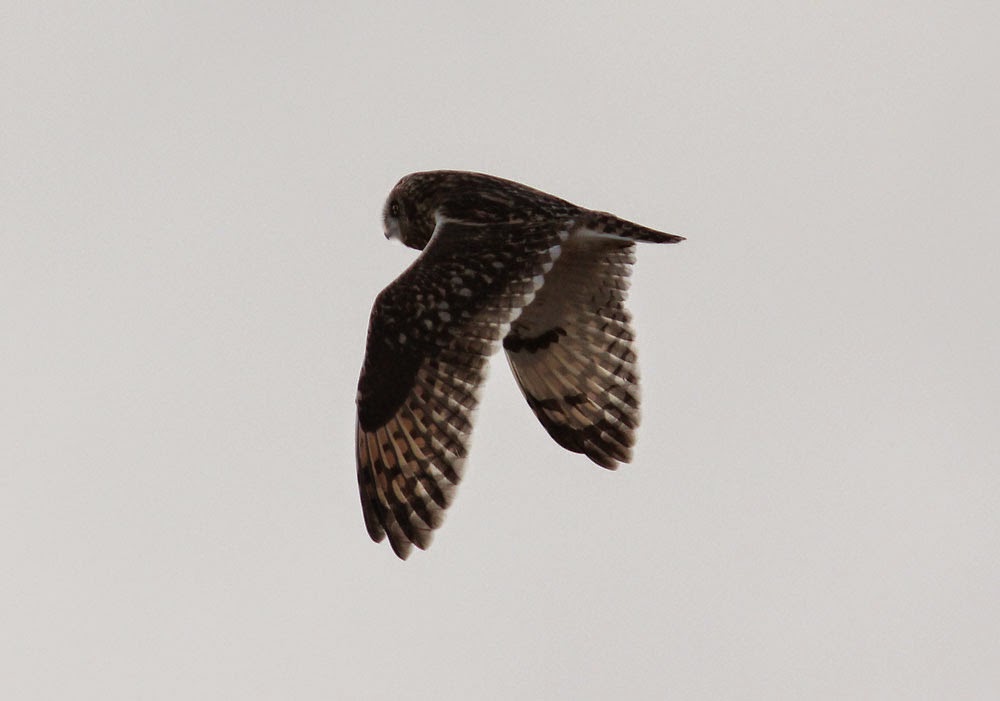 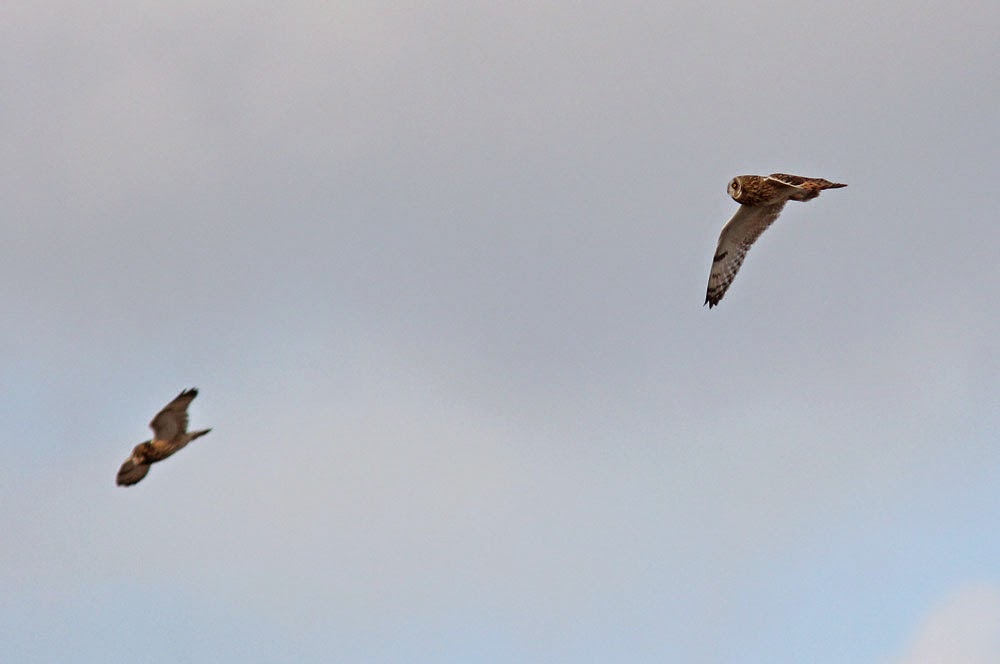 On the way back to the car park at dusk a poor Barn Owl was being kleptoparasitised ( I think?)  by a Carrion Crow, determined to take its vole... 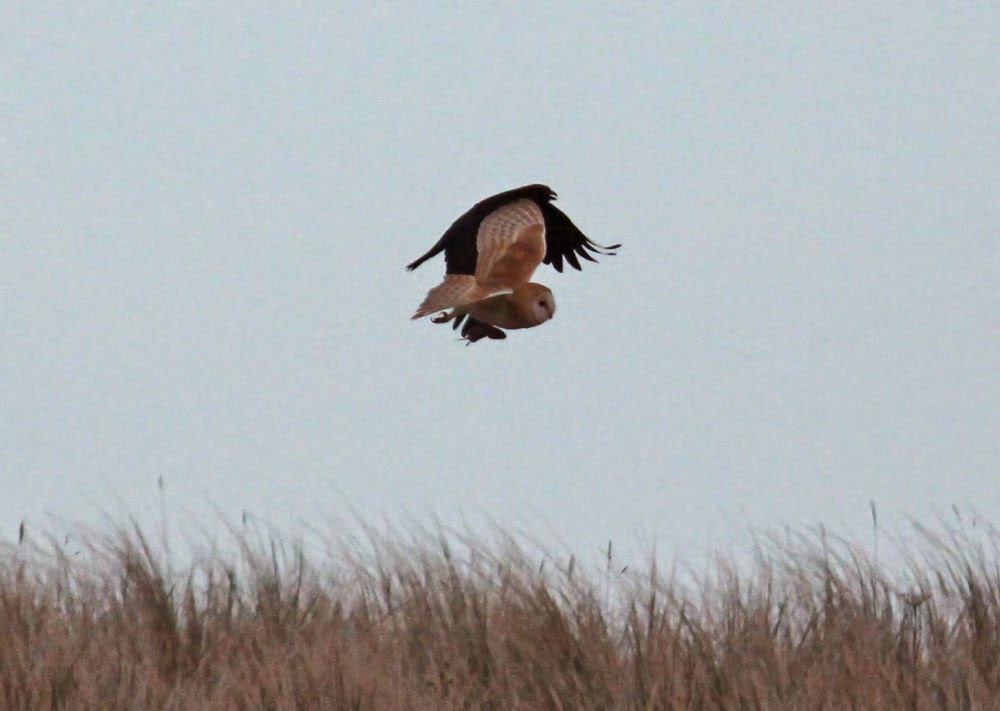 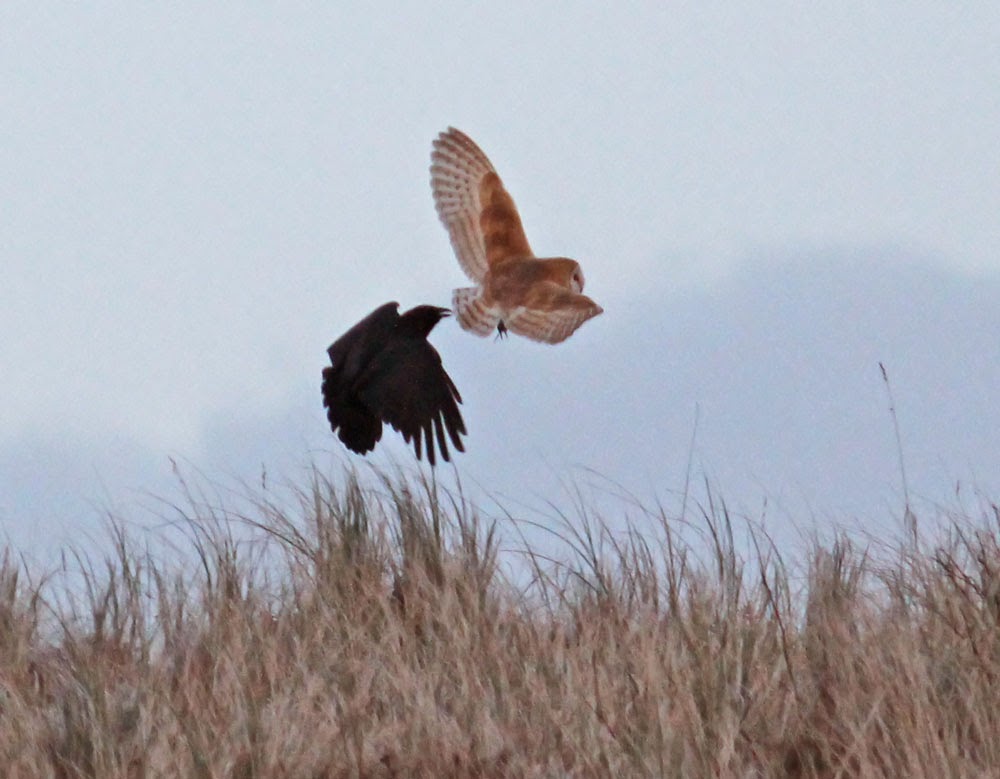 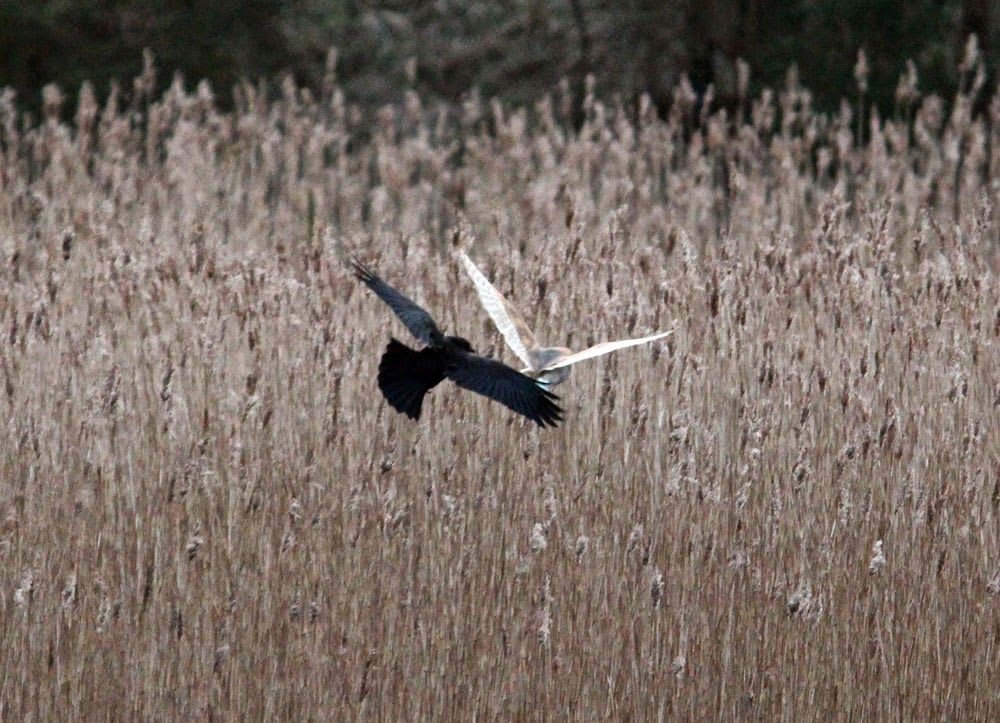 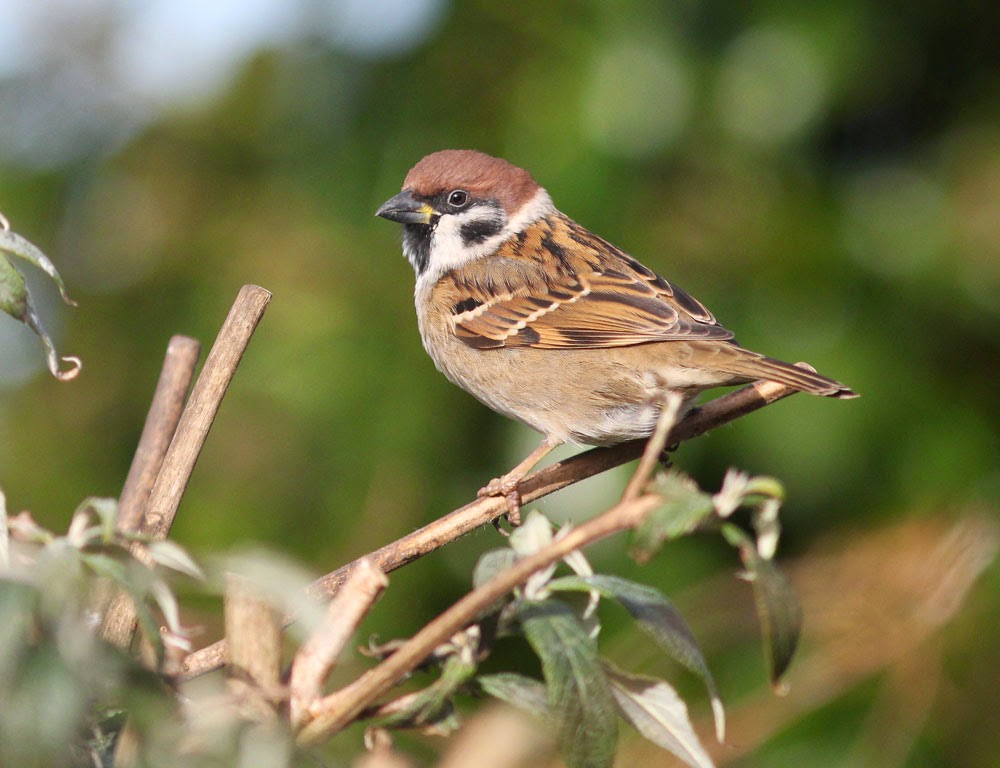 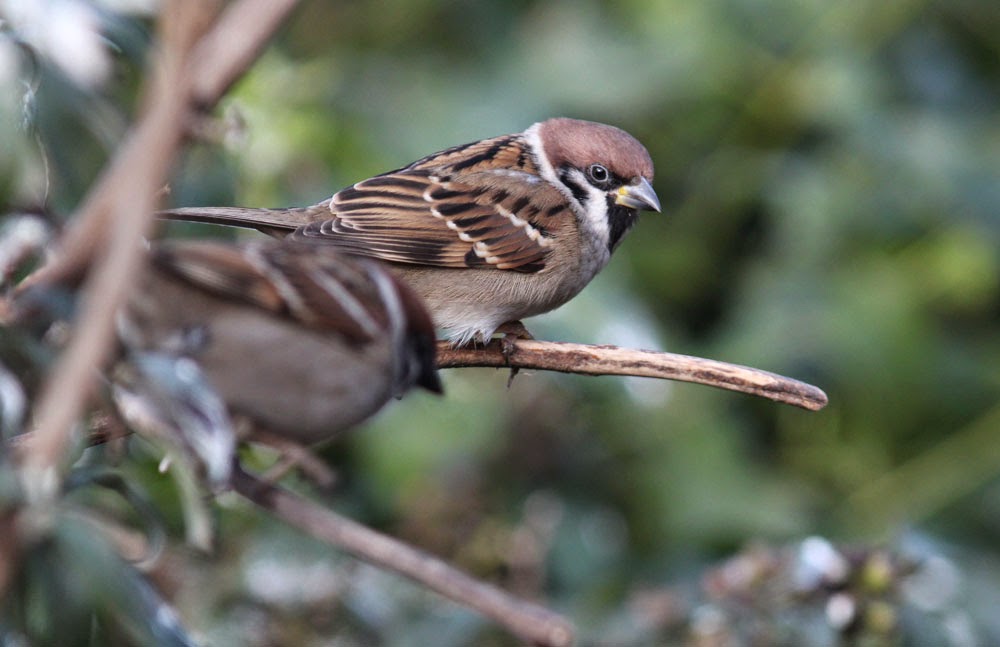 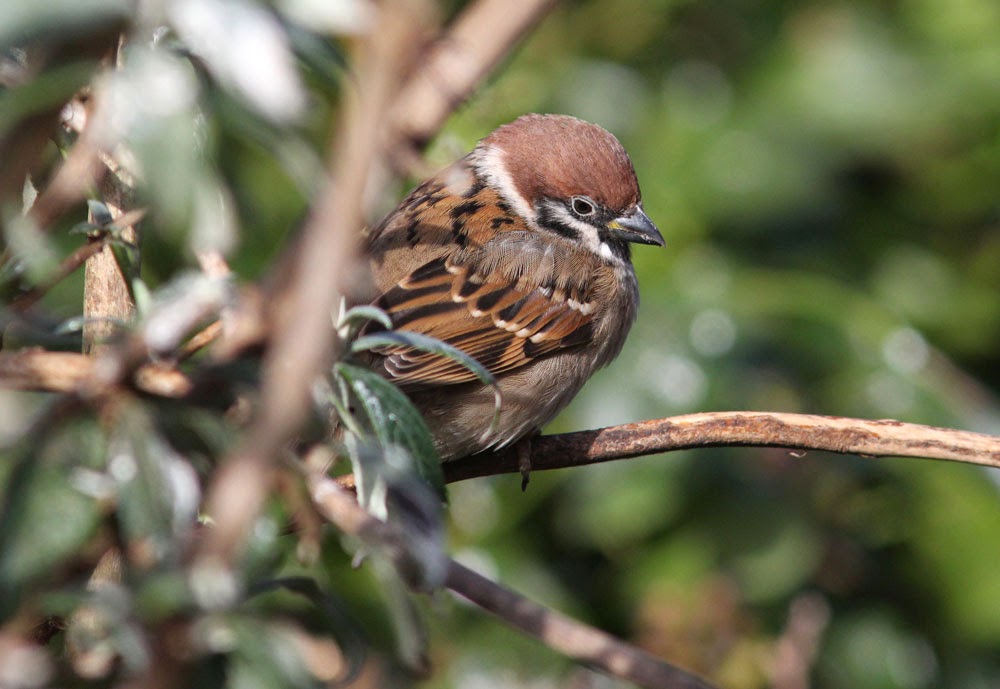 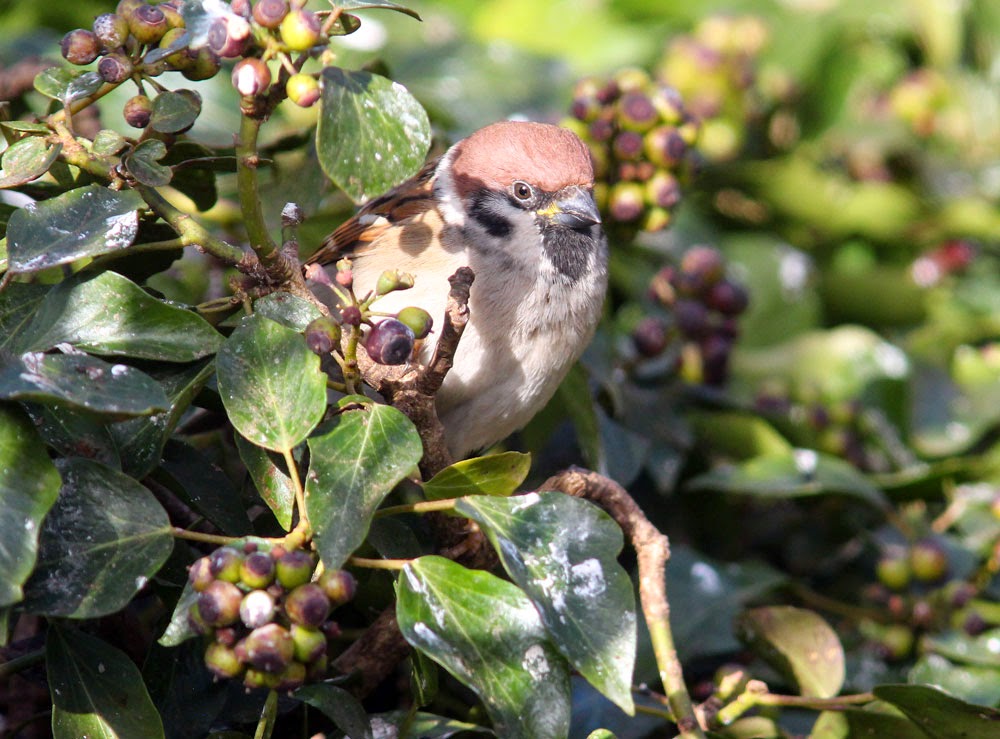 
A flexi day off work today saw us heading off to Holy Island to do a recce for the Alnwick Wildlife Group field trip on Saturday. The day was overcast and windy at first making the birding difficult. As with Sunday's Iceland Gull, today's first bird was one of the highlights, heard as we got out of the car at the Chare Ends - a Raven! The first I've seen on Holy Island, it continued south along the shore mobbed by two Carrion Crows. When we came back to the car there were two Ravens flying up and down, feeding in the same field.

From here we checked the heugh for grebes and divers with out success, then tried the rocket fields. 6 Black tailed Godwits, hundreds of Pale bellied Brent Geese ( 1 Dark bellied), a pair of Shoveler and a good scattering of Teal were noted.

As it was quiet we decided to leave the island and pay a visit to Cheswick only a few miles north, to see if the drake Black Scoter was still around. After half an hour of scanning, up he popped, the closest duck to us, with 100+ Common Scoter, 20+ Red breasted Merganser, 3+ Long tailed Duck, 1 Slavonian and 1 Great crested Grebe scattered in broken groups across the sea.

It was interesting to note that he behaved the same as the Bamburgh bird in charging around, bill open, calling ( unheard) whilst the Commons, seemed quite non plussed...

This site proved to be the best of the day, the afternoon being spent 'gulling' around the very quiet Coquet Estuary. Best here were 35 Grey Plover at Birling Carrs, 50+ Knot and a young Roe buck.

Back to work to end a short week tomorrow... 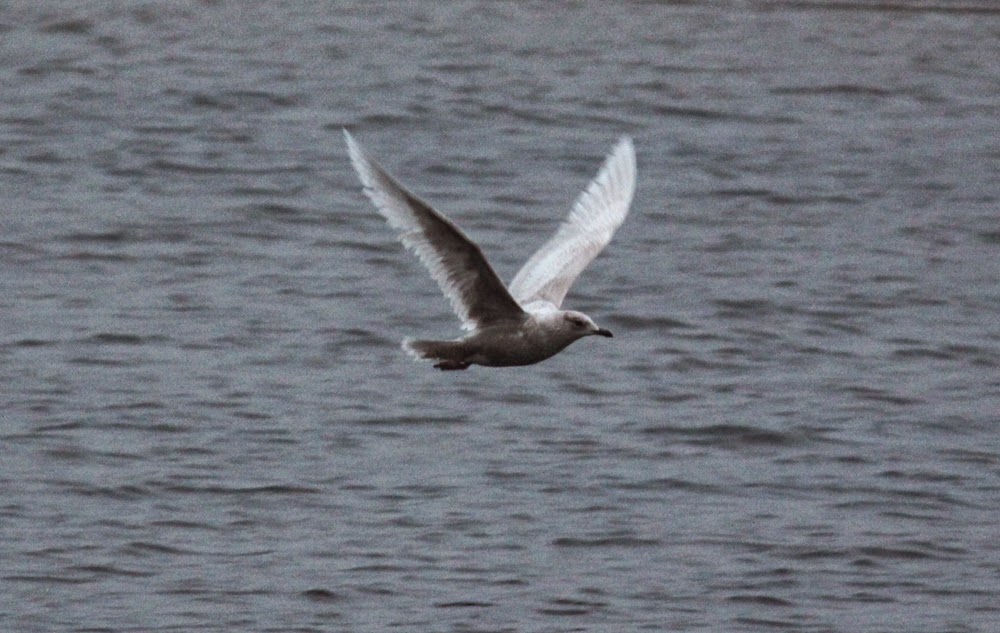 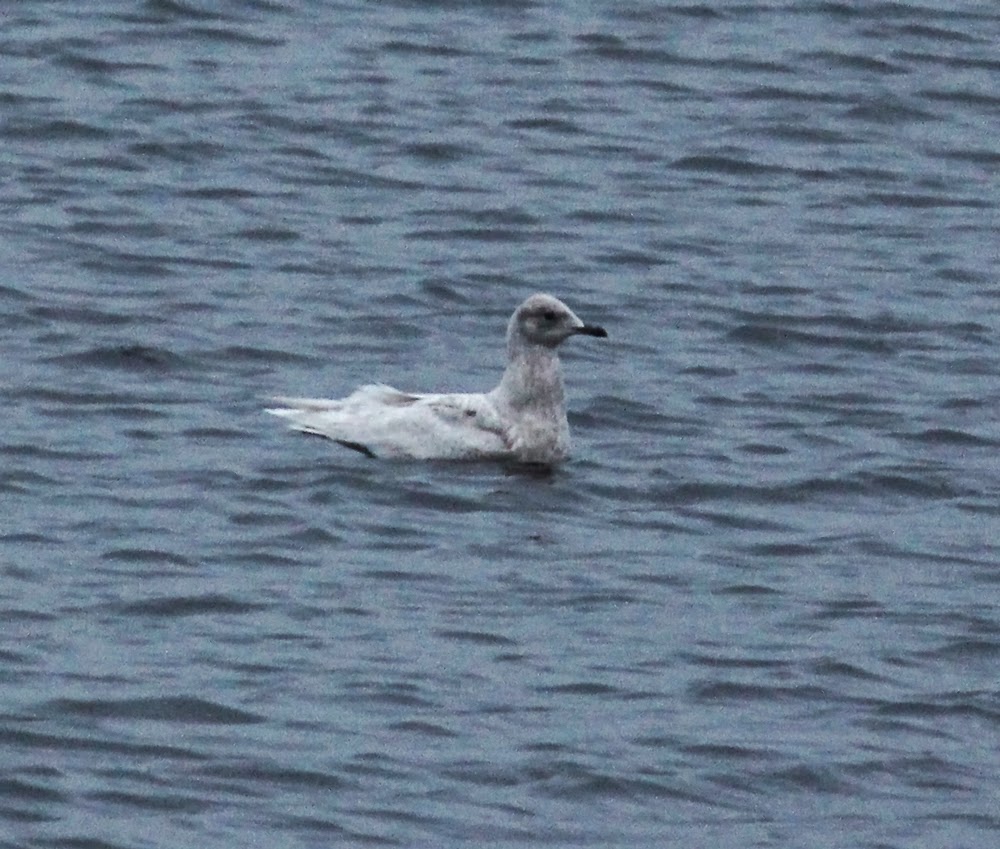 After some success photographing the Purple Sandpipers in Craster Harbour yesterday I thought I would give them half an hour this morning in some nice sunshine. 5 birds showed well with a few Turnstones. I am really pleased with the way these have turned out. Purps are a regular feature on our piece of coastline in winter, with Craster being a favoured site from August through to May.

Its nice to fluke some interesting features not normally noticed in the field. In pic 3 the bill tip opens up like a spoon to help catch on to slippery invertebrates, very strange.

Still no Dunlin though....

Please do not use the images without permission. Thanks. 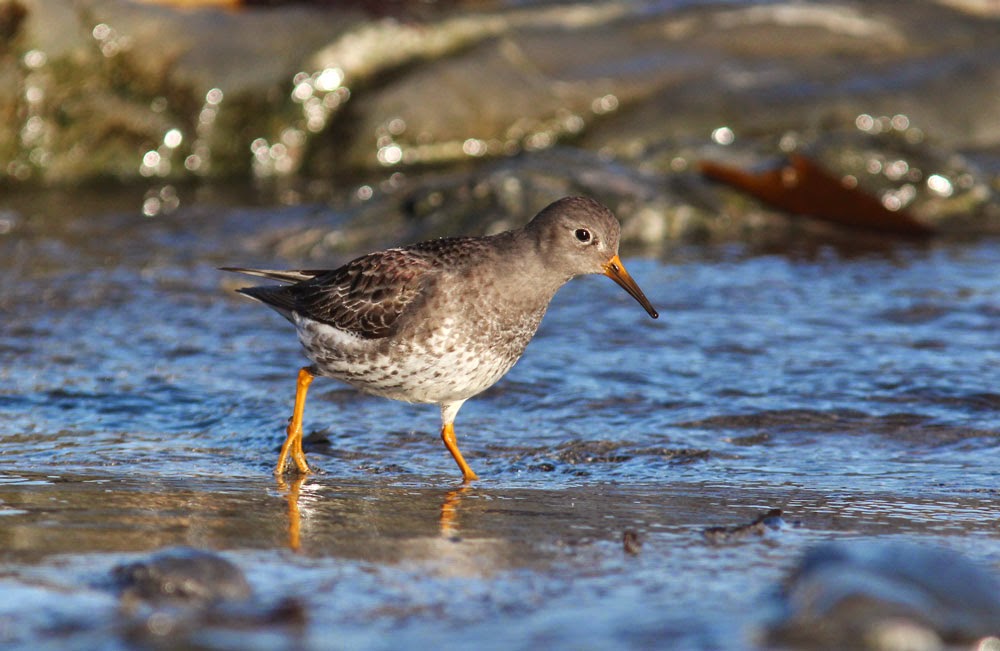 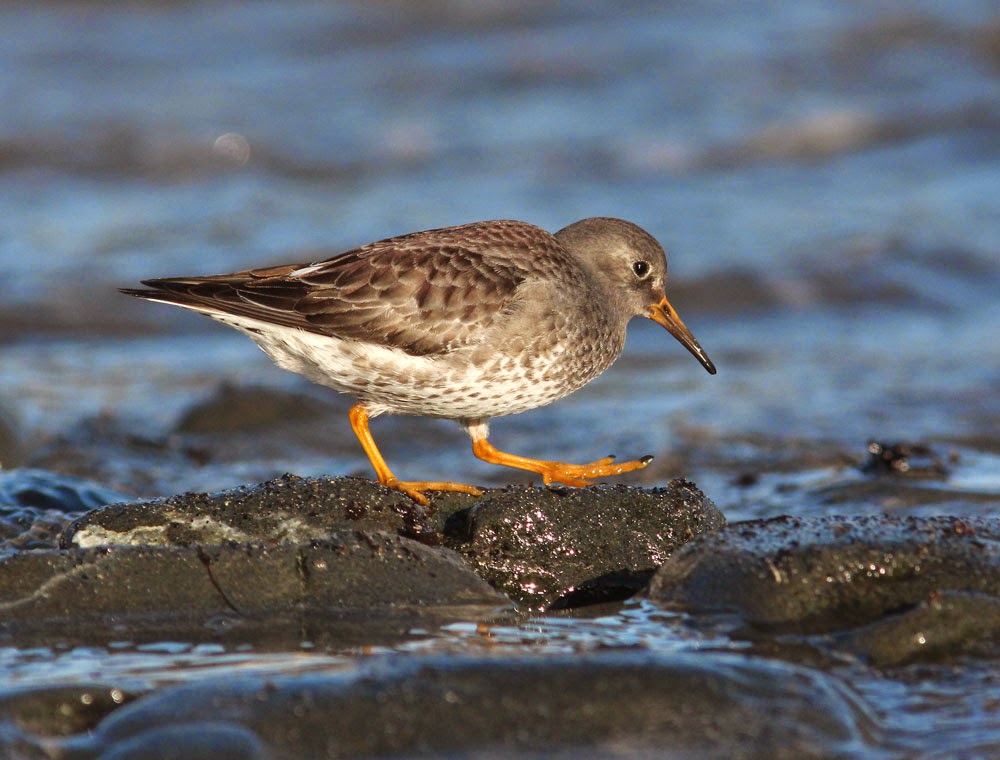 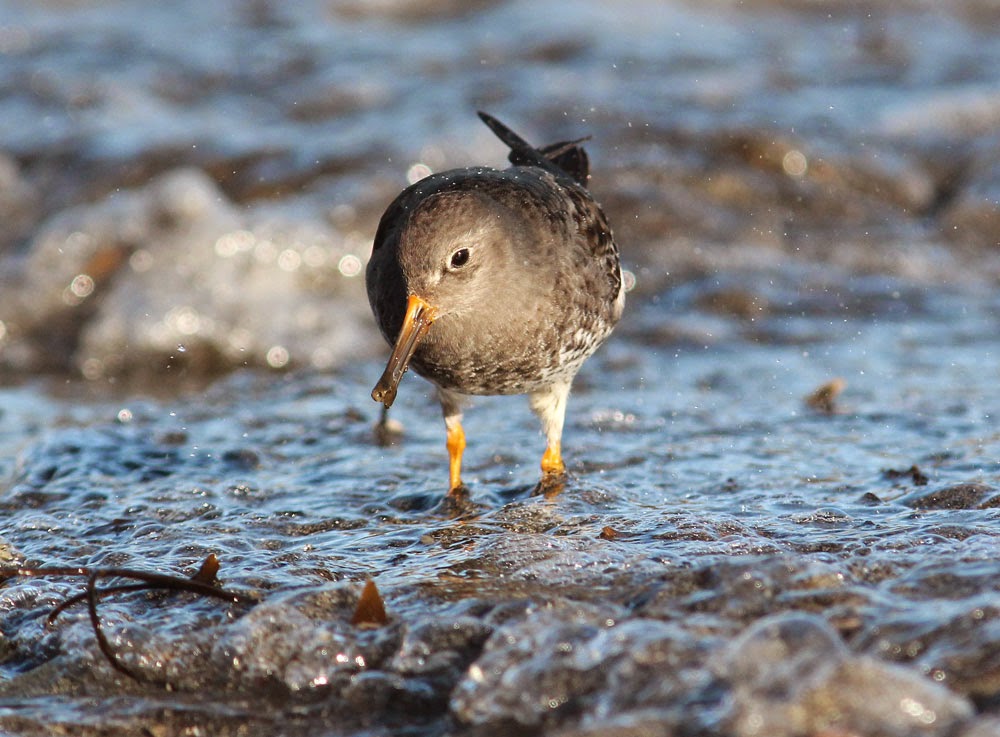 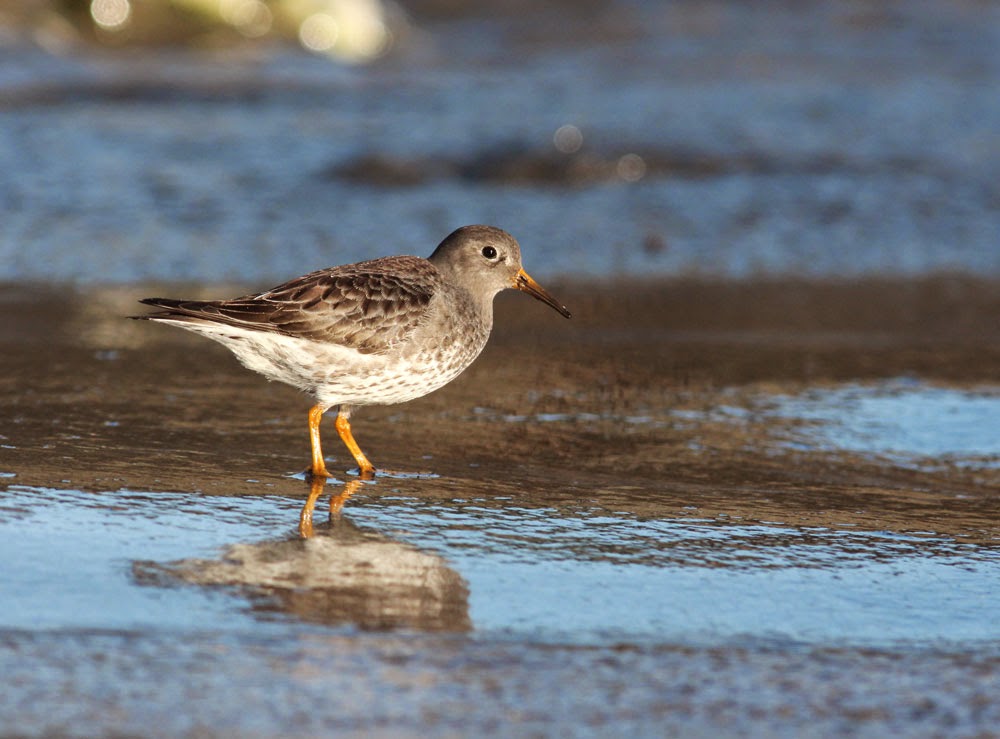 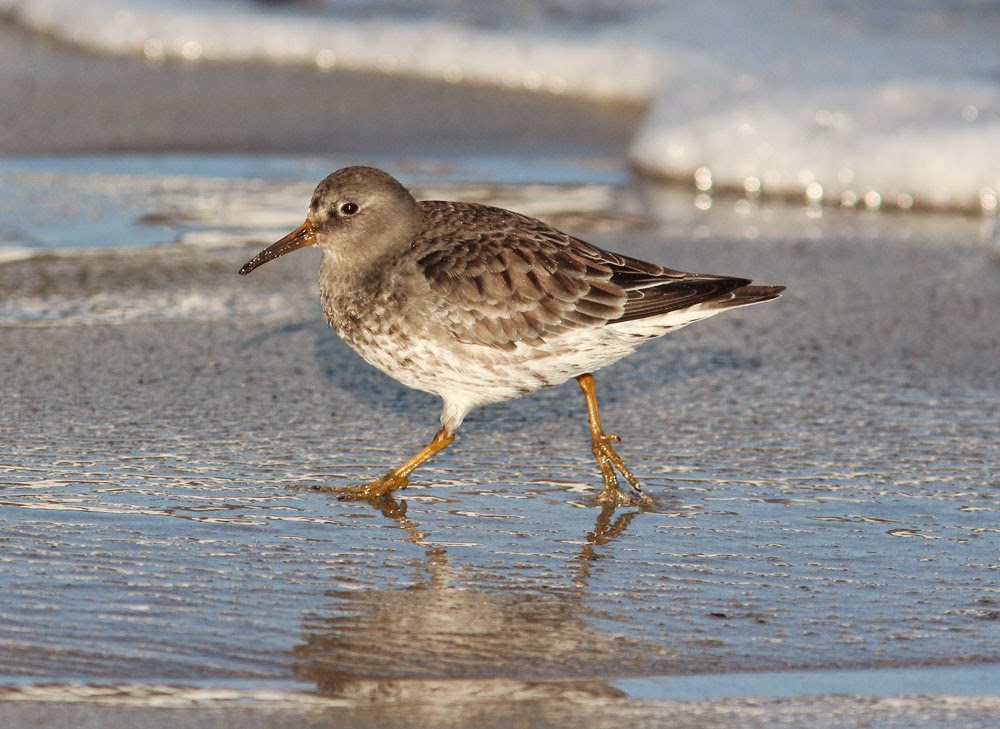 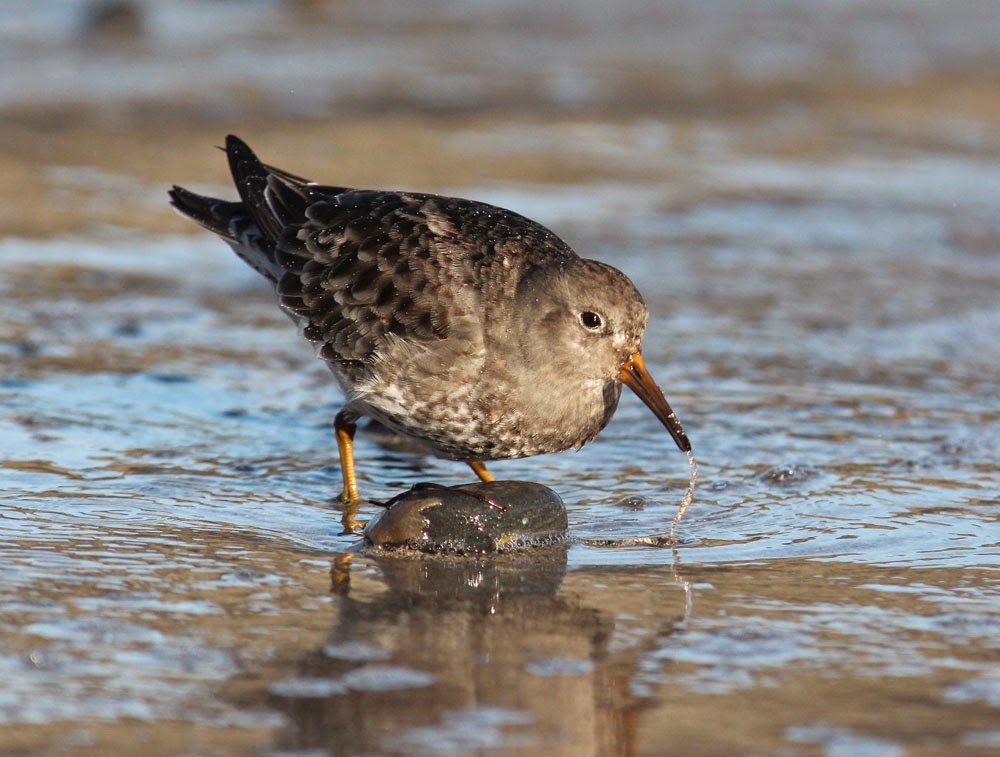 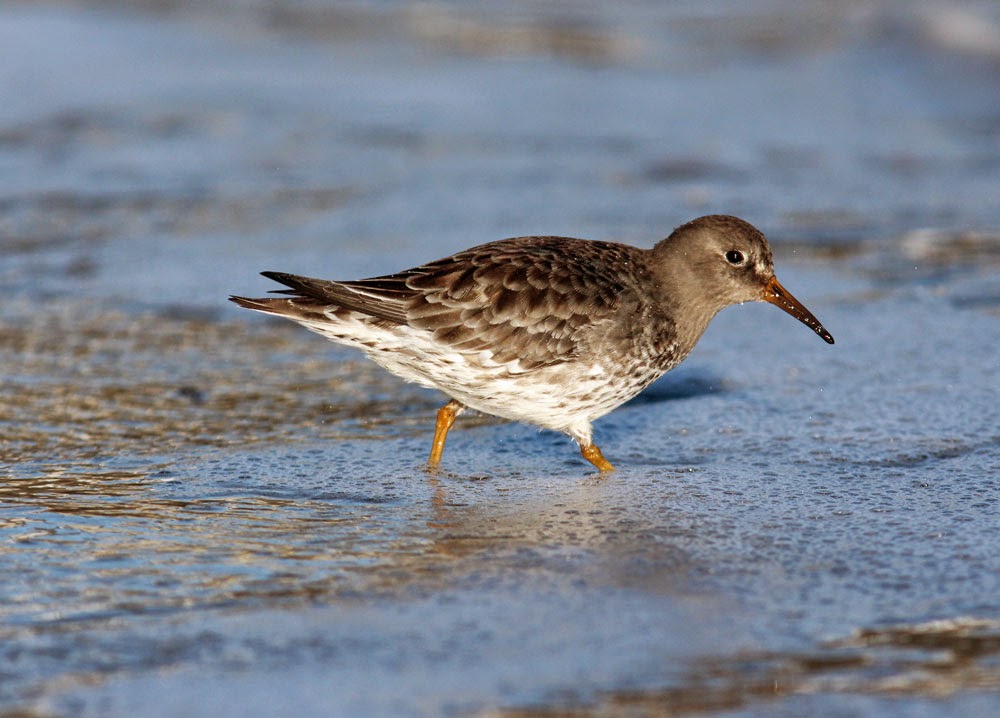 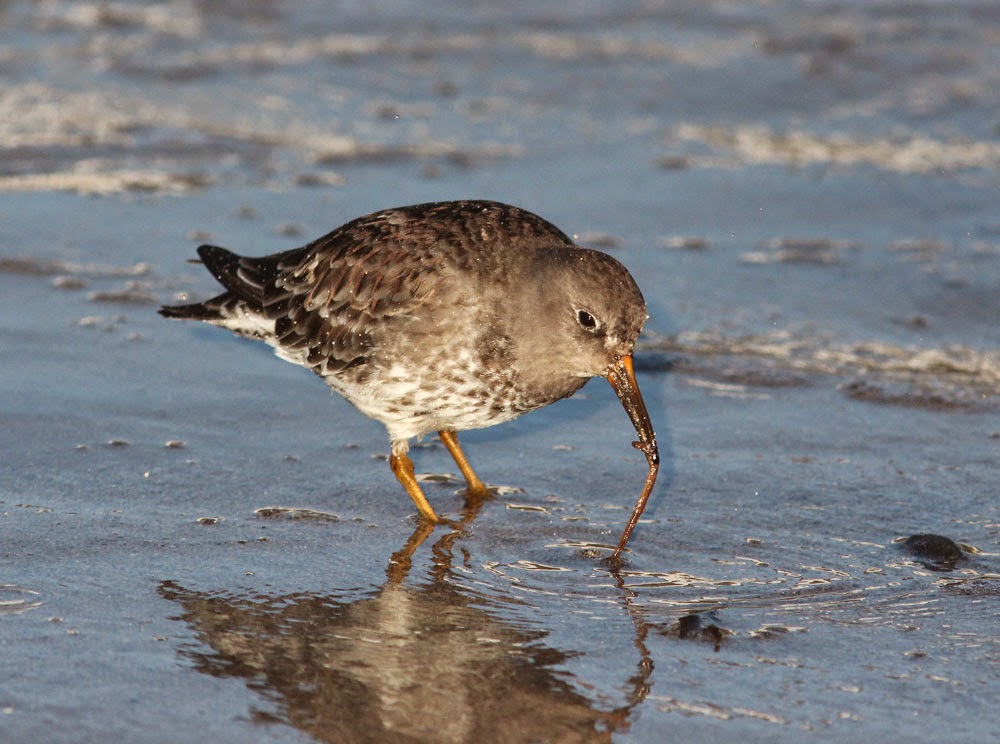 ...to use a football analogy.

This morning was another sharp, crystal clear day for a wander down the coastal section of my patch.

We started at the Howick burn mouth where things were pretty much the same as usual. A Kingfisher called and flew upstream, unseen, while  the first of 2 Shelducks flew north. A perusal of the gulls revealed nothing but the locals, but offshore there was a steady passage of Herring Gulls all going north along the breakers at a rate of about 100+ per hour.


Back up at the farm, 130+ Golden Plover, 2 Grey Partridges, a few Skylarks were in the coast fields, while a Rock Pipit was a bit unusual forsaking its usual pelagic habitations in favour of a roadside muck heap.


Next stop was to the far northern end of the patch where we drank tea and ate biscuits without a great deal of ornithological disturbance. I did get embarrassingly carried away with a glimpse of a Collared Dove dropping into a garden and out of sight.

The sunshine was lovely in the harbour so a few minutes were spent checking out what was lurking in there.

So, with a few Purps in the bag it was time to call it a day as I had be get home to be ready for another 'first' for me...
This first is not surprising really. We had a chance to of two season tickets to see Newcastle play Stoke ( thanks to Lady Howick) at home. Anyone who knows me, will now be shocked, as there is not a less sporty person on the planet, but its always good to try a new experience. I really enjoyed the afternoon out and from here we tried out a new restaurant in the city centre before getting the train back away from 'civilisation'...

Oh, the score was one each....I hope on the match of the day highlights they show the Grey Wagtail running around outside the dug outs. It put on a better performance than the Toon thats for sure!

What a lovely day its been. The sun has shone all day with a bit of frost first thing and very little wind it was a pleasure to be out. There was even a hint of warmth in the sun, a taste of things to come I hope.

A few wanders around the patch from home added only one new species to the Patch List - Stock Dove. A single bird was in stubble down near the teepee track this morning. Apart from that the other main highlight was a flock of 20 Bullfinches feeding on a lawn in the rear of Howick Hall this afternoon. I cant recall seeing as many all in one view before. I couldn't get a picture due to visitors wandering by flushing the birds as soon as the landed. Maybe next time.

At the beach along the burn mouth there was no sign of the reported Dunlin and Sanderling there earlier in the week. You know the rules, if you dont see it yourself it has to be stringy!

I hope the weather is the same tomorrow, I'm only out for a couple of hours first thing, so its on foot around the patch again. I'm really enjoying the patch work thing at the minute...

Only 2 hours in the field today due to other more pressing things, but the time was very productive. Out of those two hours, 1 hour 15 mins was spent sitting in the car gazing at the sea at Craster, and the rest was a short walk along our lane with Bunty...

Over the last 24 hours or so there has been a strong NNW wind blowing to almost a gale along the coast here. It was bitterly cold too, so I thought it might shuffle some sea birds up a bit.

Back home, a short walk along the lane was at least sheltered from the cold wind and made even better when a nice pinky male Lesser Redpoll appeared above the burn after having a drink. Pity the camera was at home...

Out of that lot, 8 species were added to the patch year list. The seabirds are a bit premature, especially the Little Auks, Velvet and Long tailed Duck, all species I expect in the final quarter of the year, not the first.