Before starting work I had an hour seawatch with Dan near the Bathing House. A mod NW 4 was blowing but it was generally fine with an odd shower.

At 06.42 a distant Great Shearwater came in to view, we both got on it at exactly the same time. It hugged the swell shearing back and forth over the waves. 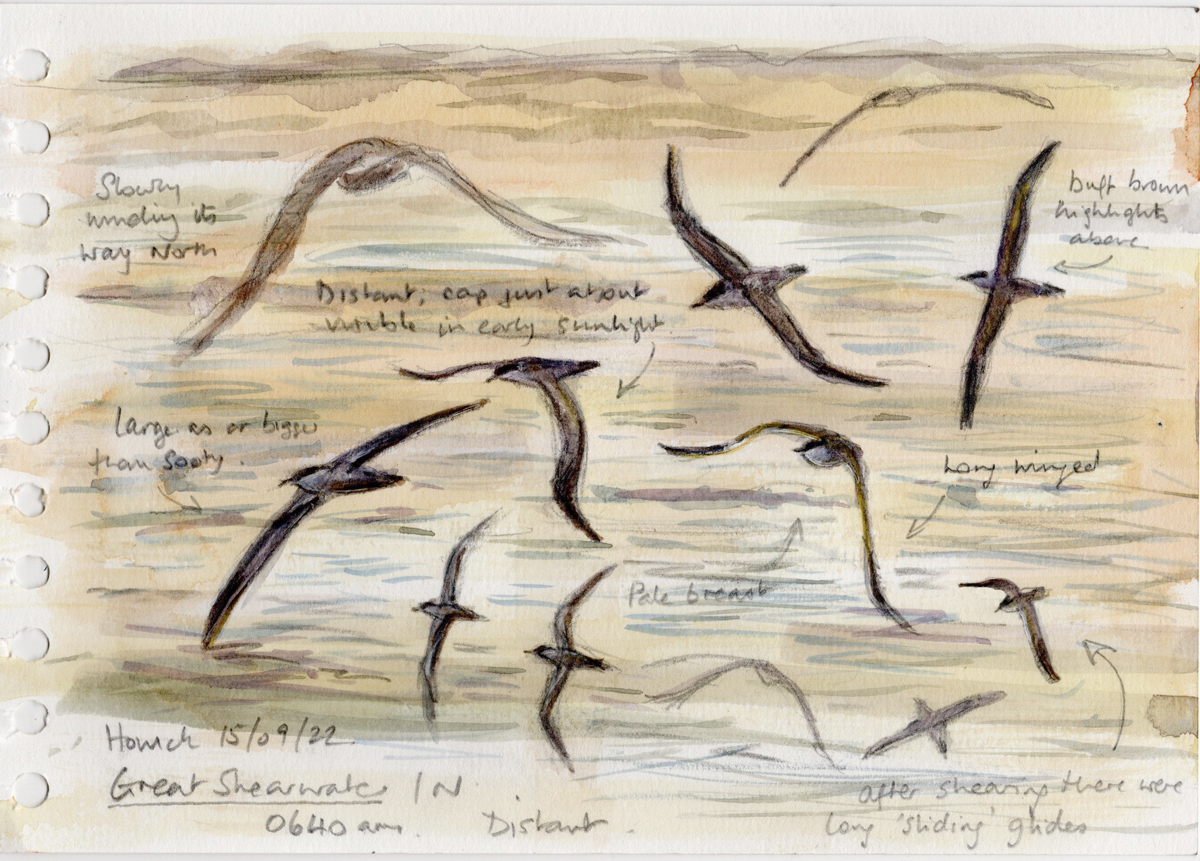 Along with the Great were 58 Manx Shearwater, 9 Sooty Shearwater, 11 Red throated Divers, 2 Arctic Skua, 12 Wigeon, 70 Pink footed Geese and a close Merlin past the point.

After work a short stint at Cullernose had -

Posted by Stewart at 2:56 pm No comments:

Before the post, apologies for no further mentions of the loss of the Queen. At 96 it shouldn't be such a shock, but it was to a lot of us. Still, I dont think my thoughts on it will add to this blog, so we will continue as normal.

Over the weekend we've had a good bit of rain, backed by light north easterlies since Friday, all looking good for some passerine action along the coast.

As per usual over recent years, I am too long in the tooth to be suckered in to high mainland expectations these days, all of the action in Northumberland was focused on Holy Island, and then some.

Try this lot on Saturday...

Those stats match up with the likes of Spurn or Flamborough .

So what was I to do on Sunday? I asked the oracle that is Twitter, for a laugh. Should I get up to the Island, a half an hour drive from me, or should I stick local and go to Boulmer as per. The results were eerily familiar as you might expect with a referendum. Out of 280 votes, 52% were for Holy Island and 48% for Boulmer . Interestingly, the battle scarred premiership bird finders, to a man, said stay with it at home. 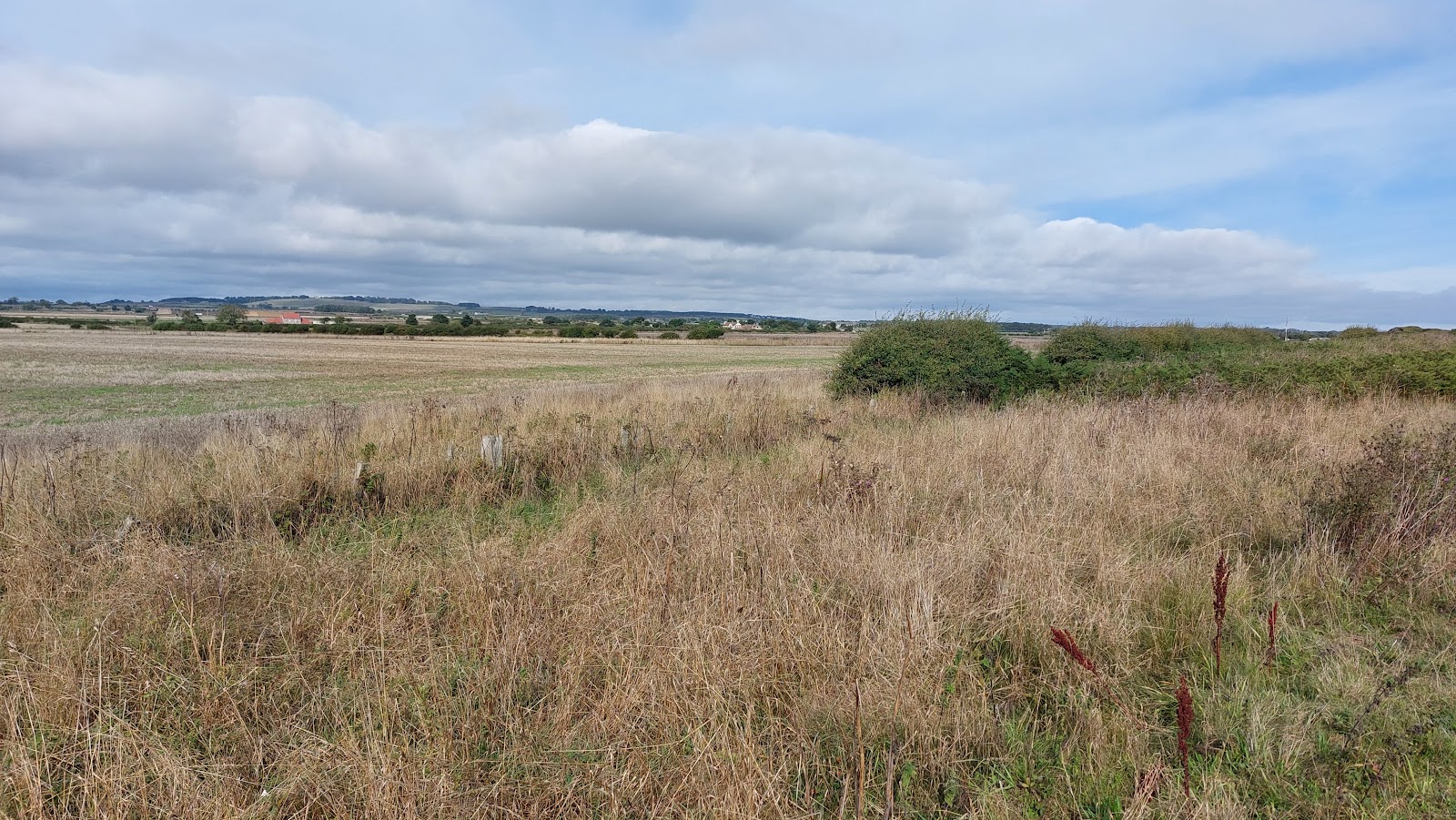 So, just as with the last referendum that had an effect on me, I backed the 48%ers and drove 3 miles to Boulmer. Who needs a barrow load of scarce anyway...

Before I get on to what we found, I can mention my home village patch was quite pleasing this week with my first Black Tern here since 2011 feeding close in off Rumbling Kern and on Friday a male Redstart and a weak looking Pied Fly at Cullernose, again good records for here. Viz migging has been active each morning during Peggy's walk with lots of Hirundines , Meadow Pipits and a few Yellow Wagtails and Tree Sparrows.

Back to Sunday.  We arrived at 6.30am, first light and spent the whole morning covering to south side as far up as the village. We weren't wading through a magic carpet of birds but we had a few to keep us going in these impoverished times.

We began at Seaton Point golf course layby as Meadow Pipits streamed overhead. 4 Siskins put in an appearance arriving from the east as did a lone, very high Song Thrush. Roadside scrub held a nice Pied Flycatcher, a Whitethroat, 7 Chiffchaffs ( no willows I could see). A Yellow Wagtail moved south over head.

A new route along the replacement coast path across the golf course looked interesting. Here were had 4 Wheatears but little else.

Dropping down on to the beach, a Spotted Flycatcher looked damp as it perched on the sand and seaweed where there were flies aplenty.

Next, we headed along to Seaton Point. It was nice to see more Private signs erected. You cant get enough Private signs in Boulmer, the most unfriendly village.

Near one of them, a second Spotted Flycatcher preened from a fence. Another dozen Phylloscs here included at least two Willow Warblers, while another Whitethroat moved around the brambles. It was while standing here, the loud 'peeez' of a Tree Pipit called overhead. in a flock of 6 or 8 Meadow Pipits. Once we arrived at the eastern end, the sparse hedge that runs north had another Pied Flycatcher, flicking from bush to fence and to Hogweed stems and a female Redstart flushed and flew off into thick cover. A Wheatear was on the plough with more pipits. 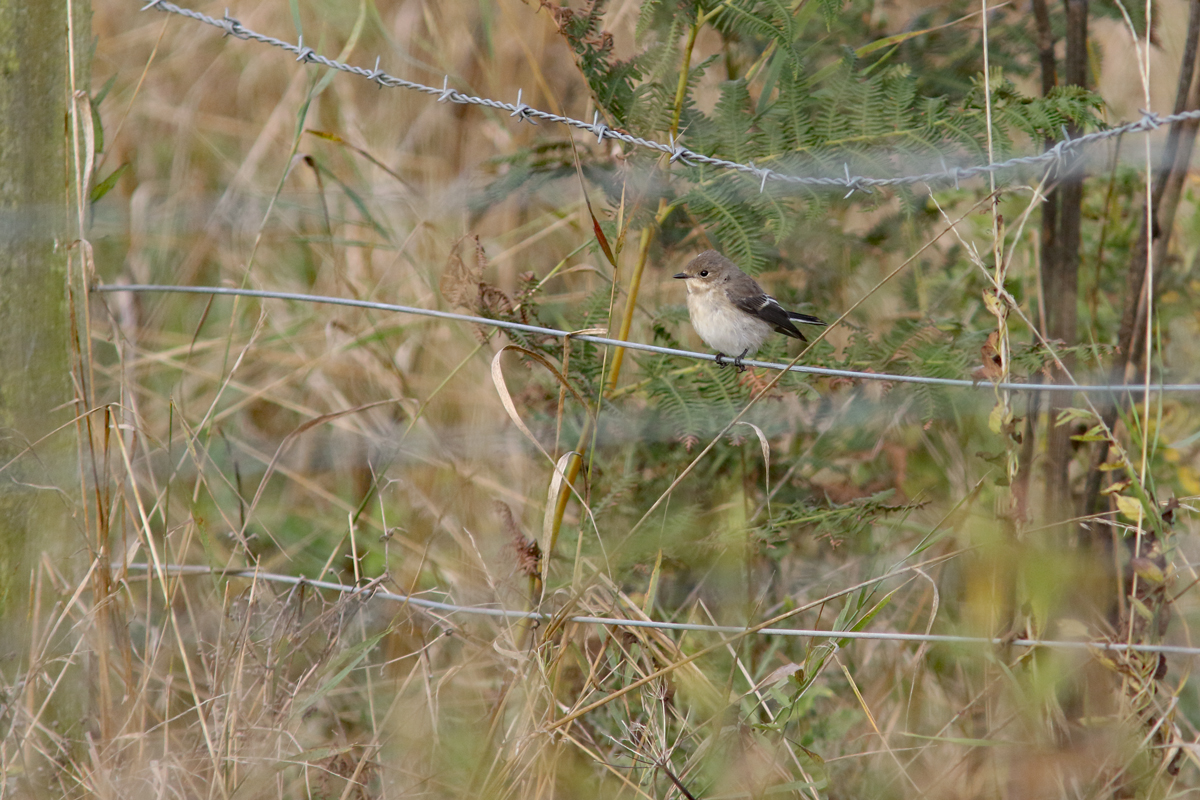 The return journey covered more of the same with a new Blackcap and a male Redstart as additions .


We weren't too disappointed that we couldn't unearth anything rarer as this scatter of drift migrants is a lot better than we usually get. Should we have gone to Holy Island? No chance. There had been a big clear out up there anyway so it was much better to find our own stuff down here.

The weather looks like it might give some tasty seawatching conditions from Thursday this week so watch this space... 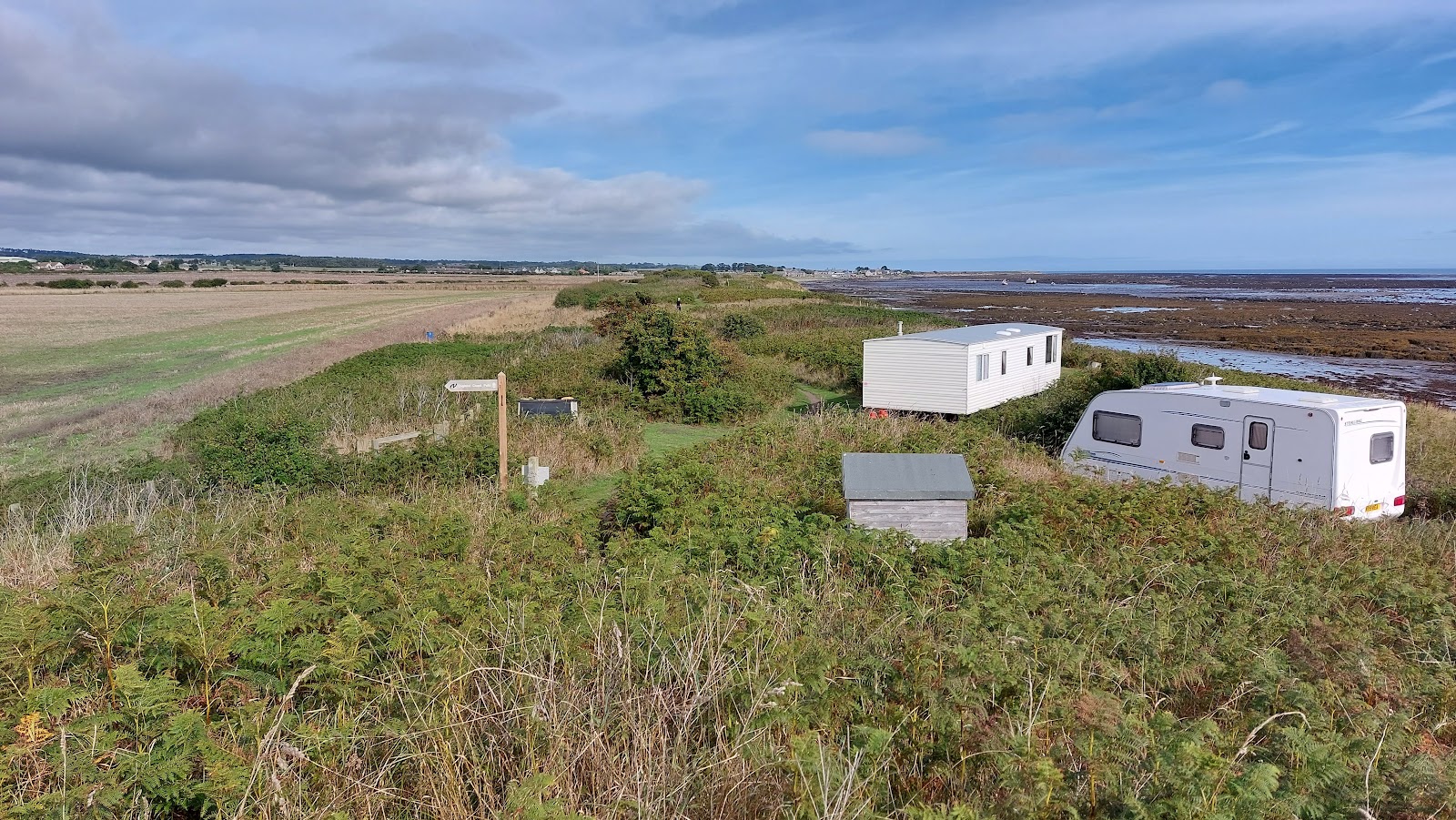 As I am writing about something as trivial as moths, an ill old lady has the eyes of the world trained on her health up in Scotland. Will this be the end of an era? Time will tell...

It feels like I shouldn't be doing this at the minute but without any disrespect, the world turns.

Back to garden insects.

The other day I posted some pics of a lovely Convolvulous Hawk-moth I'd found on the road verge. Well, almost daily since then, rare and scarce migrant moths have been found in my moth trap. Its a novelty here as we are a long way north for moth migration.

4th Sept
I've been looking for Beet Moth (Scrobipalpa ocellatella) this week without luck until this morning. I saw Tom and Ian both had first and second Northumberland records respectively so I was pleased to come in bronze position when I saw the target on the second tray from the trap.
This is where things go belly up... I got a pot and was about to pot the moth when I noticed another, larger micro near it. A pyralid.
My hesitation cost dearly as the Beet Moth flew off and away up the drive! Bugger.
Now, getting back to the cause of my distraction, the pyralid was duly potted. I knew I had not seen this species before so was keen to get on with identifying.
Imagine the shock when I find the moth in the Manley Guide and double check it on various moth sites etc and see it is very unexpected indeed. This time a gold medal winner, a first for Northumberland and a 'very local' species nationally.
Here it is -
1. Ancylosis oblitella Saltmarsh Knot-horn


Knowing the invasive Beet Moths were out there, the trap was deployed again the next night. Sure enough, my 2nd and 3rd Beet Moths were secured this time. Firsts for vc68, 5th and 6th for Northumberland.
2. Beet Moth (Scrobipalpa ocellatella)

Then as if to top it off on 6th the first moth I saw in the trap was this belter, a dark form of Box Tree Moth, another first for vc68 ( are you keeping up, 3 vc firsts in 3 nights!) but around the 16th for Northumberland as a whole ( vc67 and 68). It was accompanied by another 2 Beet Moths, my 4th and 5th.
3. Box Tree Moth

So what a good mothing week its been, maybe my best. I wonder if there is anything else to catch out there?
Posted by Stewart at 5:31 pm No comments:

Busy, busy, busy now that Autumn is in full swing and the wind has been from the eastern half over the past week. There is never enough time to do everything.

On 31st August I managed a couple of short seawatches at The Bathing House. An hour in the morning resulted in some decent birds with 1 ad Pomarine Skua, 1 close in juv Long tailed Skua, that bonked one of 25 Arctic Skuas on the head forcing it to land before moving away north. A great comparison of size and structure could be had during the interaction. 1 drake Velvet Scoter was a surprise  along with small numbers of Common Scoter, Wigeon and Teal.  It really is that time of year. 80 Manx Shearwaters completed the show.

It felt good so after work I popped down to Cullernose, but an hour and a half showed that most passage was now over. Still, 2 Long tailed Skuas, 14 Arctic Skua, 1 poss Pom but too distant and 30 Manx made it still worth while.

On Saturday 3rd September rain and easterlies looked good for an arrival of migrants to off we went to check the coast path area. Up at Holy Island and the Isle of May birds were falling in with plenty of scarcities too, but a random bit of mainland isnt really like that. We just hope for scraps really...in this case, I didnt even get those. No migrants at all, not so much as a Chiffchaff. Some compensation was had on the way back when I flushed a lovely Convolvulous Hawk-moth from the verge. It was soon pocketed and taken home for photos then released after dark. 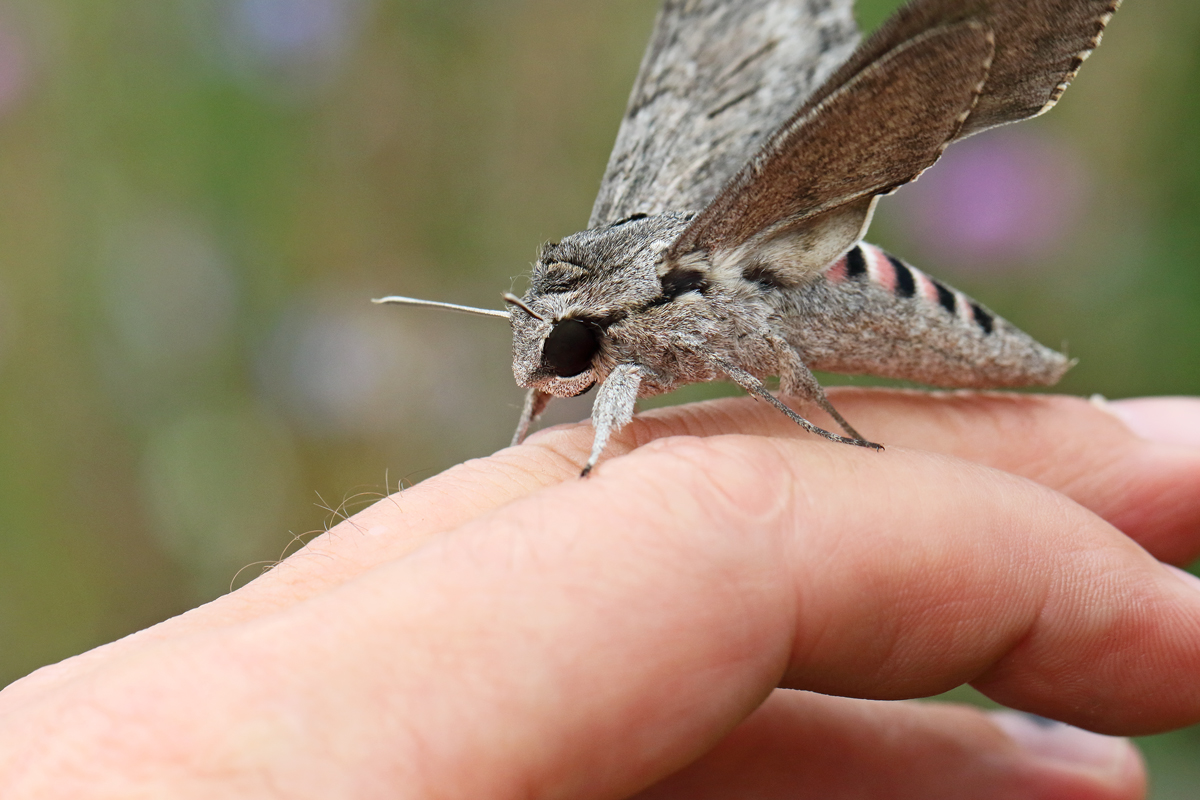 Sunday 4th dawned foggy and mild with a light south easterly breeze. I met John at Boulmer where we were filled with hope of what the morning might uncover, after all this is a big headland into the North Sea.

The final tally is less than inspiring so here are the highlights - Curlew Sandpiper 1 juv on the beach with Dunlin, 3 Black and 1 Bar tailed Godwit flew S, 9 Brent Geese N at sea. The only passerine that got us going was an 'educational unstreaked acro' in a ditch near the car park. Doesnt that phrase make your heart sink? All I wanted was a Wryneck, not of this educational nonsense ( a phrase used to try and get some meagre enjoyment from stringing a common species). The acro turned out to be  Reed Warbler no matter how hard we tried. It is still a decent bird on this patch really, Ive only ever seen maybe 4 or 5 in the area. As the wind was set firmly from the east,a couple of days annual leave were booked for Monday and Tuesday.

On Monday a half hour sea scan had 8 Red throated Divers and 3 Arctic Skuas S with 1 Arctic N, but the glare from the sea was appalling so I gave up and went along to check Craster. On route back, a juv Peregrine went over N and a Whimbrel S .This is the north end of my patch and its not been visited much this year.

A good yomp around Craster Village fuelled with numerous juicy Brambles at last had a few birds.

The moth trap has produced some good stuff this week too but thats for another post...