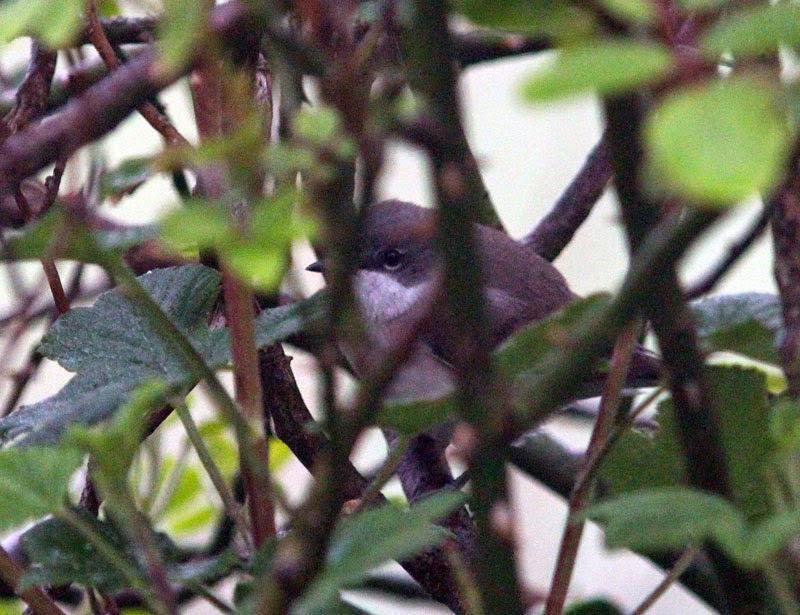 I got up for work, bleary eyed, at 6.30 this morning. I stumbled into the kitchen and flipped the kettle switch to 'on'. As my vision gained some focus, a small movement in the wall rose caught my attention through the window. Looked odd, so a quick glance with the bins found a nice Lesser Whitethroat, also newly awake, sitting huddled in the fog next to the bird table. I just found time to grab this shot before it flew off south. Migration in action. A nice way to start the day...
Posted by Stewart at 8:05 pm 1 comment: 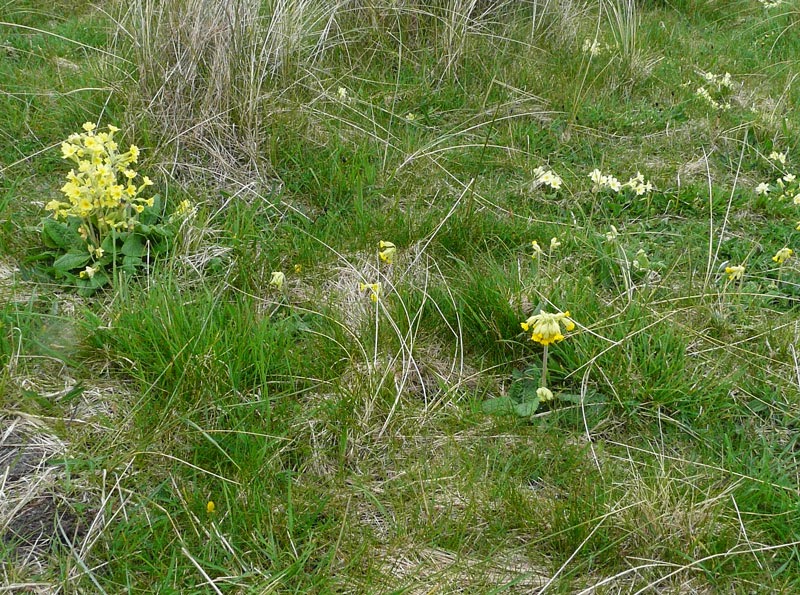 Two visits to Low Newton today as the weather was promising for some migrants. A light easterly with drizzle means you don't want to be far from the coast in Northumberland. As it happens, we had an enjoyable morning but there were no scarcities.

Passerines in the scrub at the Tin Church included 4+ Blackcaps, 4+ Willow Warblers, 4+ Chiffchaffs, 1 Grasshoper Warbler and 2 Lesser Whitethroats. Down at the point, a Tree Pipit was near the compound along with 3+ Wheatears and a Whimbrel flew South. A nice show of Primrose and Cowslips in the dunes resulted in a False Oxlip, a hybrid between the former two species.

As the drizzle became steady, we headed down to the pool and hide for some shelter. Here, a party of 5 Arctic  Terns flew low over the water and out to sea, my first House Martins were with other hirundines. 5+ Sedge Warblers were new in, singing all over the pond margins, while a party of 6 Black tailed Godwits dropped in for a rest to join the now semi-resident 2 Ruff. One of these birds is coming into breeding plumage. On the damp scrape, 15 Dunlin, 1 Yellow and 1 Pied Wagtail added to the interest.

After the Hedgehog rescue at the weekend, another good deed came about as I was coming home from work this evening. Near Longhoughton, as I drove along, the car in front flushed a Lapwing from the roadside? Strange, I thought, and as I passed I could see chicks huddled in the gutter grit!

An abrupt stop and reverse, and I soon located 3, day old Lapwings about to be flattened on the road, so I scooped them up and, to a chorus of alarm calls over head, forced my way through the hedge and let them into the field where they scuttled off on sturdy little legs. Within a minute or two both parents were standing guard over them.

A success! Its nice to see lowland breeding Lapwings for a change, a rare sight nowadays...
Posted by Stewart at 11:48 pm 3 comments: 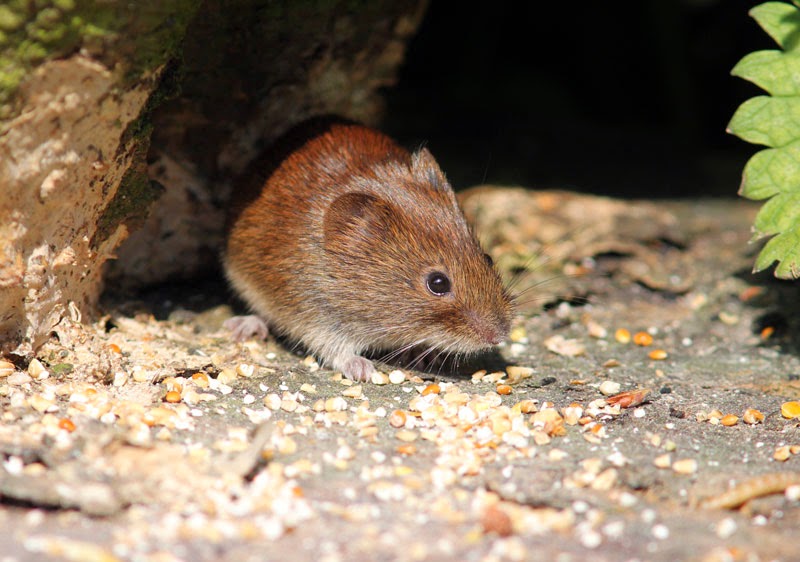 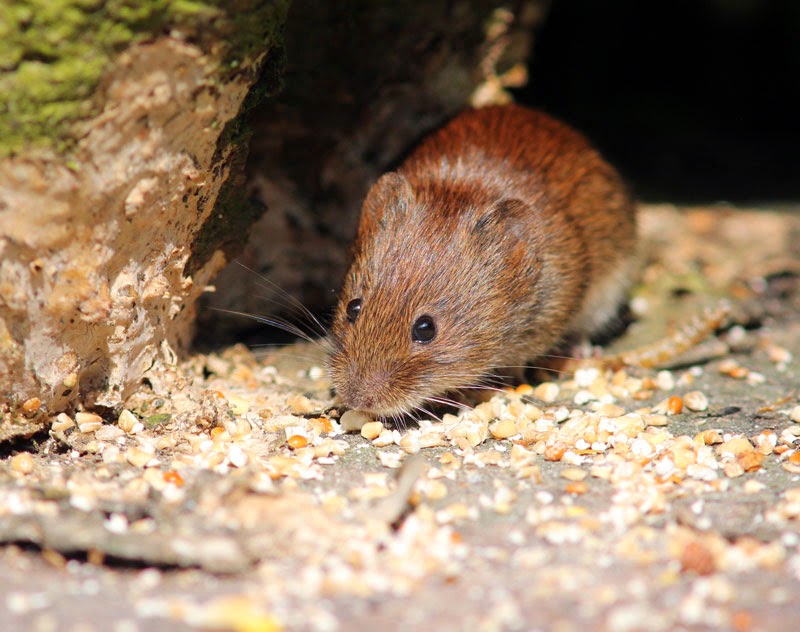 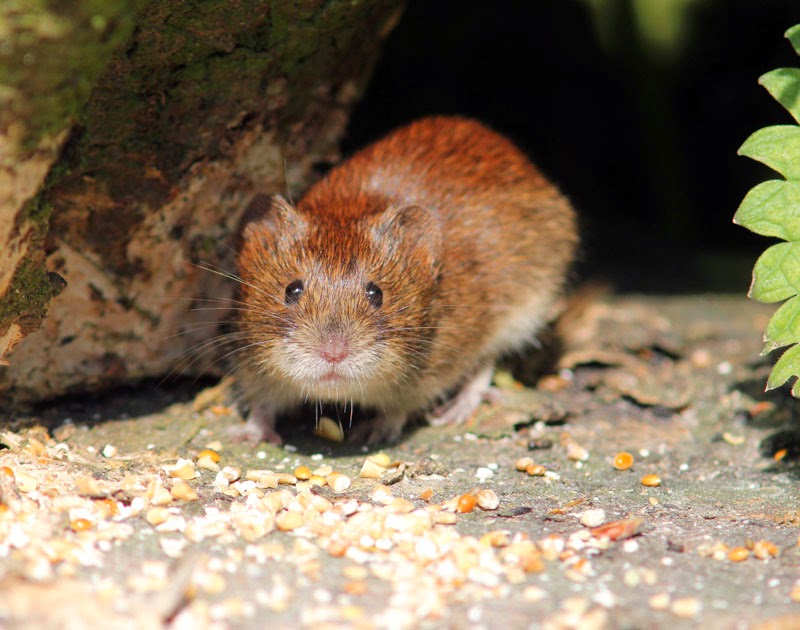 Meet 'Vince'. This is a Bank Vole that lives in some logs along our drive. I posted a picture of him a while ago, but the sun was shining today so I couldn't resist another go. Scatter a bit of seed or some apple and he is there within 5 minutes. About 5 feet away, a Wood Mouse lives below the bird table, but its much more secretive and tends to come out at dusk. I'll try and get some pics one of these days.

While waiting for the vole, this Dunnock was an opportunity not to be missed, albeit only for one shot. 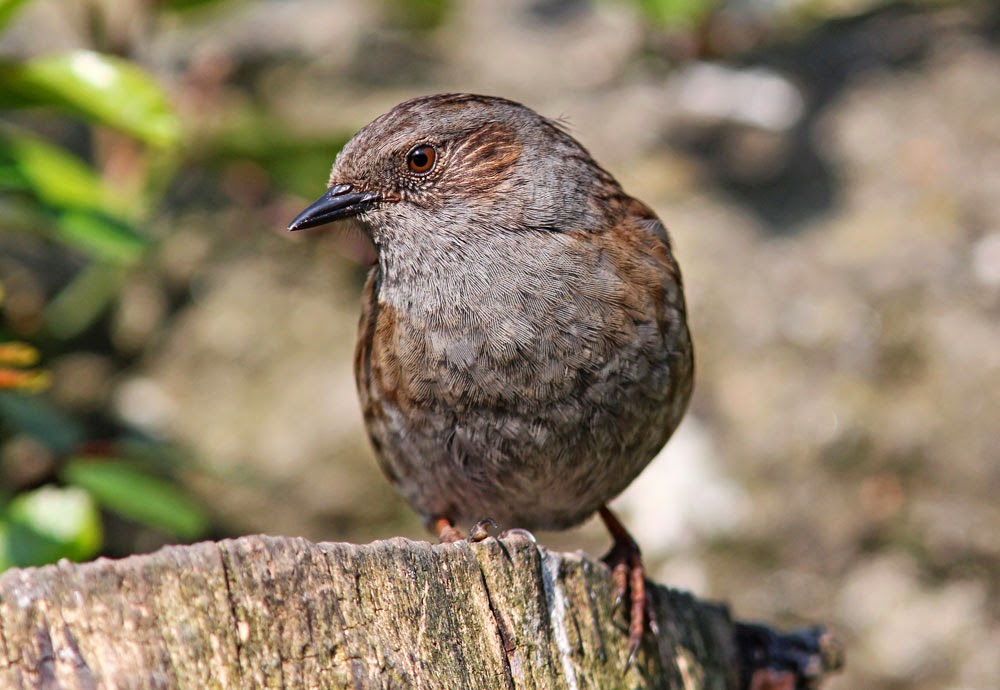 Yesterday, we found a sickly Hedgehog on our drive so I quickly gathered it up and delivered it to a rescue centre at Longframlington ( donating £20 for its upkeep too). On the return journey, a wooded roadside near a bridge over a burn looked tempting so I gave it 10 minutes. A lovely male Redstart was singing from the tree tops, my first of the year and always nice to see.

Today we started off at Newton Pool, but only gave it an hour so we could be off before the bank holiday hoards arrived. Swallows are much in evidence here now with a few singing on territory. The two Ruff were still on the scrapes as was a White Wagtail briefly, but there was no sign of the Avocet that dropped in last night.

Over near the golfcourse, a Lesser Whitethroat played hard to get in the thorn scrub as it rattled its song out, and a Grasshopper Warbler was reeling near the pay car park. While checking the dune cover a nice female Marsh Harrier dropped in for a short visit before gaining hight and flying off south west. Also noted were 1 male Blackcap, several Chiffchaffs and Willow Warblers.

From the coast we headed up inland a short way to Ros Castle where the scenery was outstanding. From one spot we could see the Cheviot and Hedgehope, then looking right, Lindisfarne and Ross Back Sands! It was quiet on the bird front, but some Green Tiger Beetles showed well, if a little flighty ( are there any other beetles that fly as readily as these!) and a few wasps on bilberry caught my attention. They have turned out to be Norwegian Wasp Dolichovespula norwegica. I think I'll be looking a wasps a bit closer in the future. 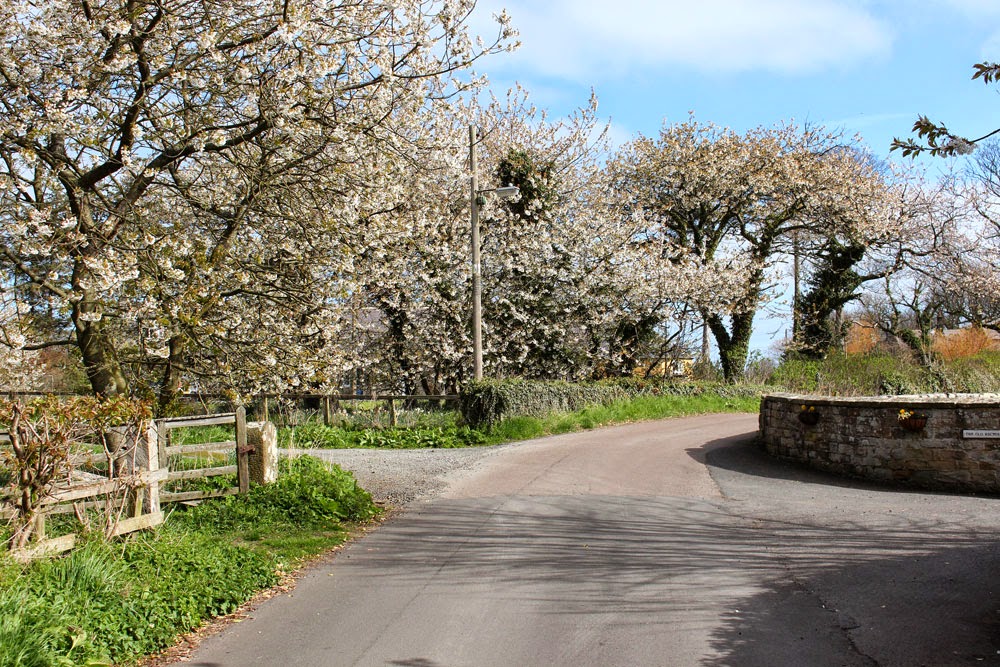 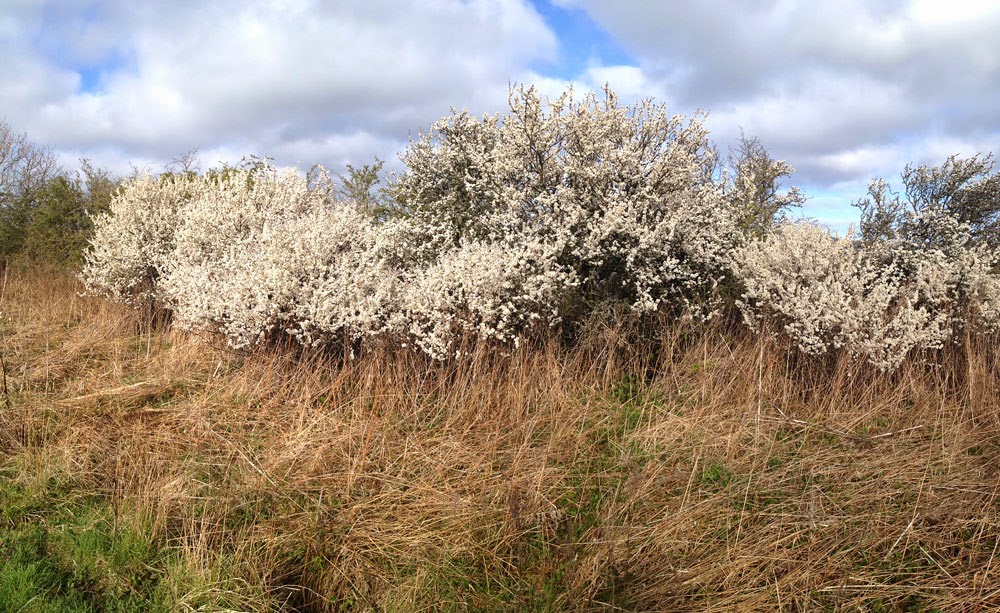 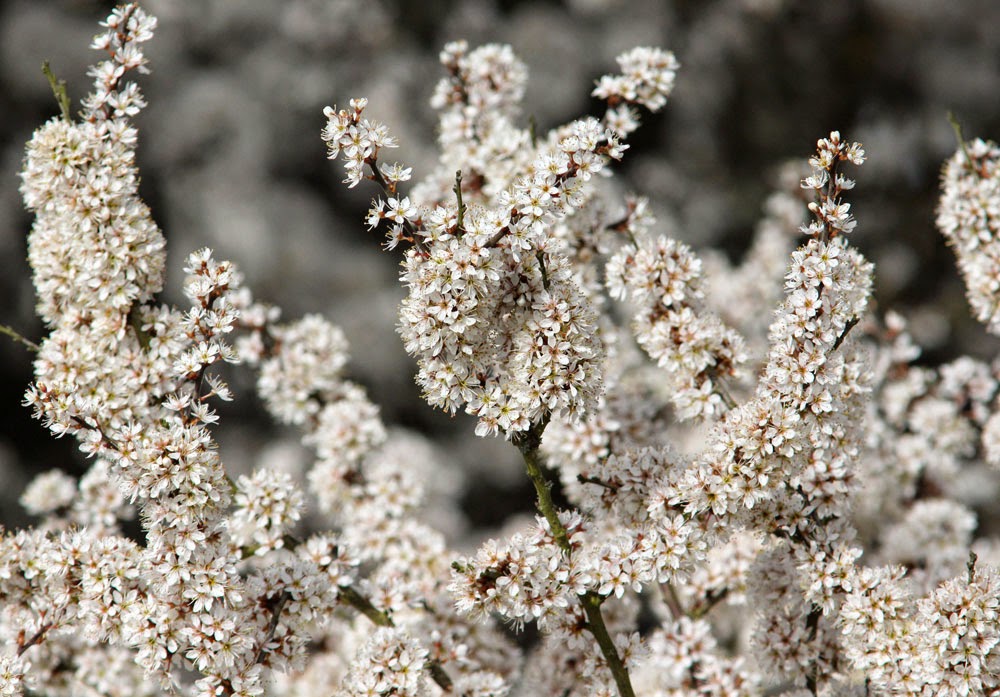 A lovely and sunny weekend so far but there is a bite to that easterly wind. The blossom on the cherry trees at home ( top) and on blackthorns in the lanes (bottom two) is at its peak. The blackthorn in particular is like candyfloss!
Posted by Stewart at 7:23 pm 1 comment: 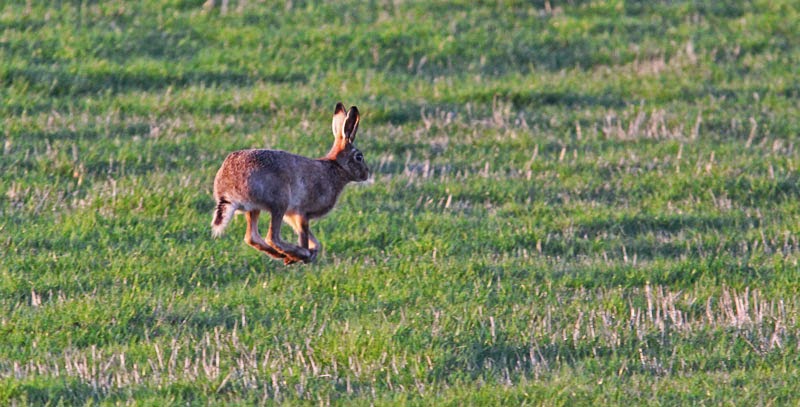 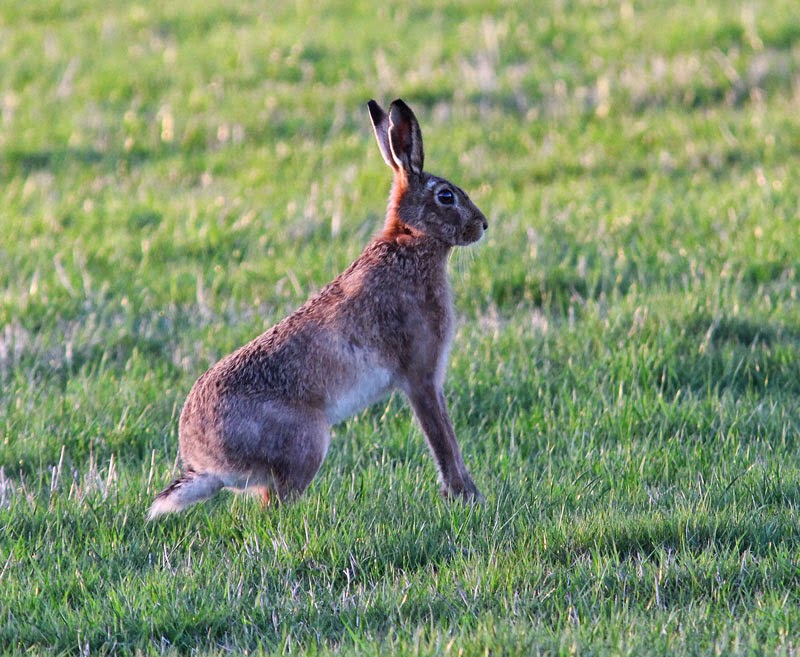 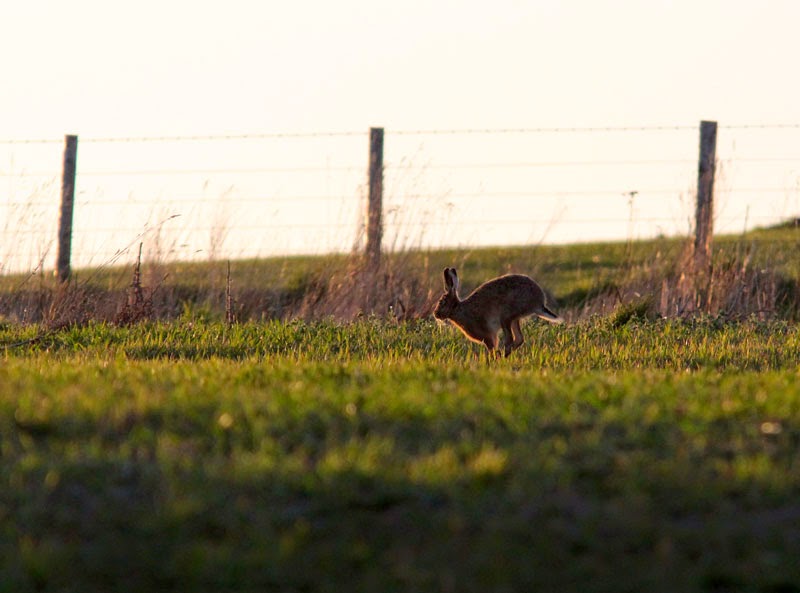 Some Brown Hares from this evening. As one runs past, a quiet 'purse of the lips' squeak and he stops, looks around to see what the noise was, and he's off again...if I had been a poacher, he may not have gone to box another day.
Posted by Stewart at 8:17 pm 4 comments:

A varied morning began with a  brief visit to the sea cliff bottom just a couple of hundred yards from home to photograph a new plant for me - Sea Spleenwort Asplenium marinum.  Not having heard of it before, I only stumbled upon it by accident on the internet this week, then found that it could be seen on my doorstep. It is found on rocks and buildings within the range of salty sea spray, so it is quite easy to locate. This fern has a more westerly distribution generally and is scarce in Northumberland.

While taking some pics, a Yellow Wagtail flew in-off, calling, and a Sand Martin flew overhead.

Next stop Newton Pool for some migrants. As Gary noted, I have been visiting his patch most weekends recently. The main reason being, that I have a hankering for some wetlands again. For years, Druridge and Cresswell were my weekend haunt, but now those places are busy constantly, and are quite a drive south, so Newton has it all, only 6 miles from home. My home patch now, is still very nice, but the habitat is more designed for pheasants, than waders and wildfowl.

The first thing I noticed down on the scrapes was Gary standing on the track, phone to his ear. Mmm, was he ringing out news of some overshot vagrant? A quick glance at the marsh revealed the object of the excitement - Egyptian Goose!

Only my second in the county, so it would be rude not to get some snaps. Gary had the nerve to suggest that he didn't want a Greylag in shot as it made the gyppo look 'plastic'! Birders eh.... ;) We were soon joined by Mr Steele, who, despite protestations, came especially to twitch the goose. Yes he did. Dont let him tell you different.

Also here were 2 Ruff, a steady passage of Sand Martins, my first Swallow of 2014, Willow Warbler and Chiffchaff. Out on the point, a Whimbrel and a few Sandwich Terns were new year list additions, but Skylarks and Meadow Pipits the only passerines.


After leaving Newton, with a little time to spare, I called in briefly at Embleton Quarry. This overgrown scrubby corner has a pool too, though it looks polluted, there were a few ducks present, 2 Goldeneye, 2 Shelduck, Mallard.

Another couple of plants new to me were nice to see. Although naturalised escapes, in the world of botany (new to me), I think they are still ok to add to the list.  Good numbers of 7 Spot Ladybirds and a Peacock butterfly were noted. 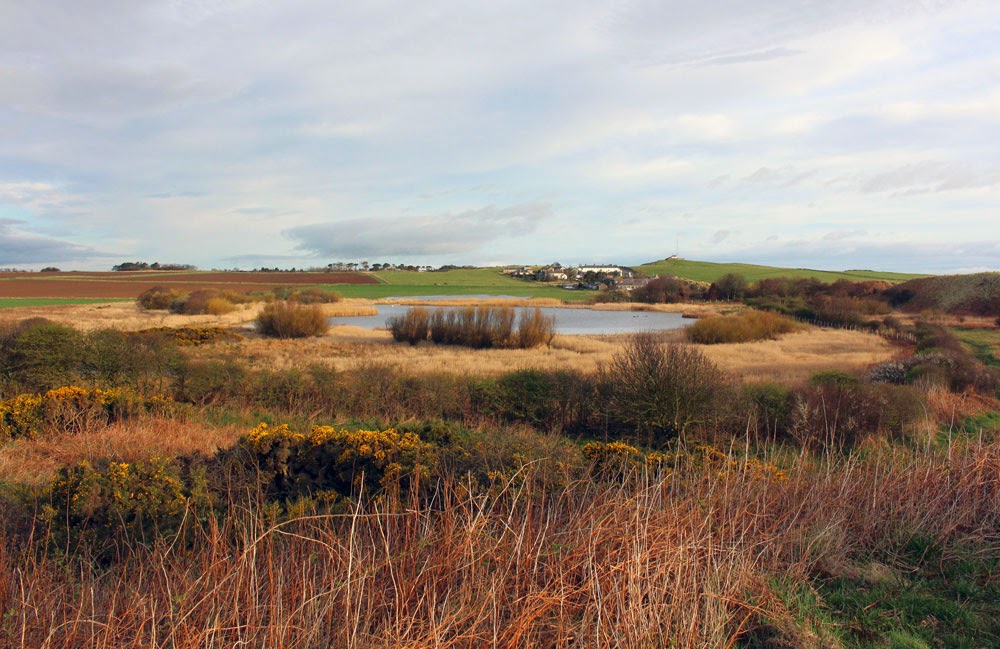 After a week of darkness and poor visibility when everything looked like Beijing, the weather finally changed on Friday night. So, full of optimism, I was off out at 6.30 this morning to check for migrants at Low Newton. A lovely morning was had, but migrants were, as I expected, thin on the ground. 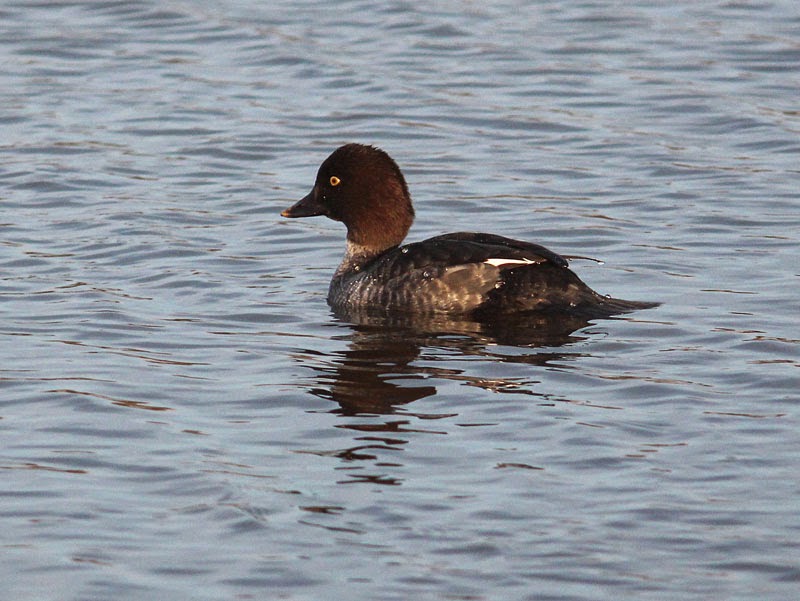 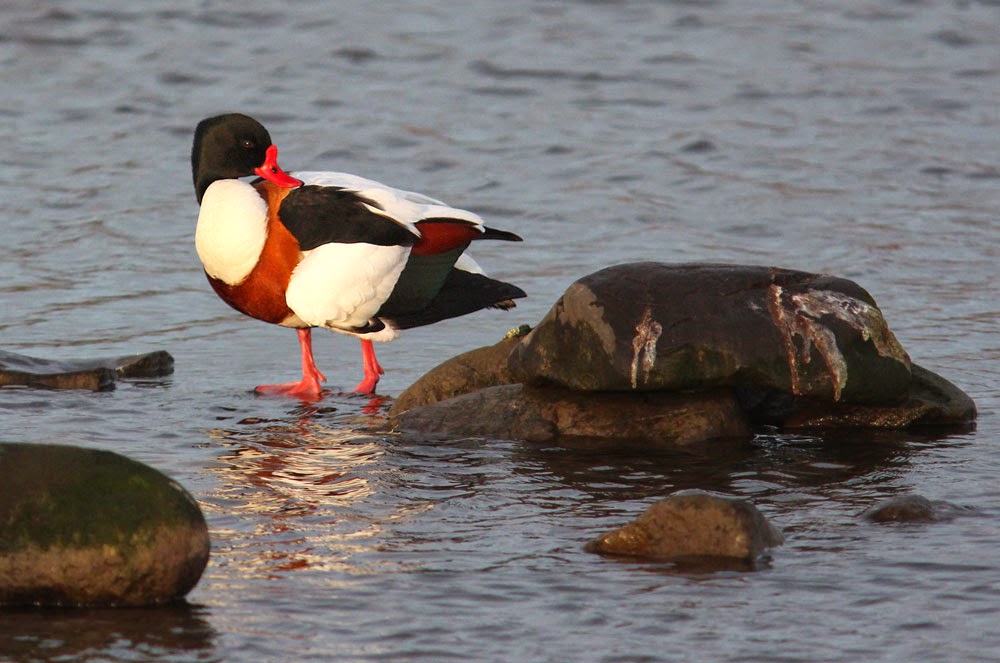 From the hide, the early sunrise was giving a nice glow to the wildfowl. Out on the scrapes, things haven't changed much with good numbers of Wigeon, Teal, Gadwall, Mallard and Shelduck all present along with Redshank, Oystercatcher and 9 Bar tailed Godwit. Only 2 female Goldeneye were left from the five or six present a few weeks ago.

As I left the hide, the sad tones of a Willow Warbler came from the scrub just to the south. Only one, the first of his kind through here this year flitted about singing from tree tops, sometimes being chased off by the now settled Chiffchaffs. A Fieldfare flew west high overhead, calling. 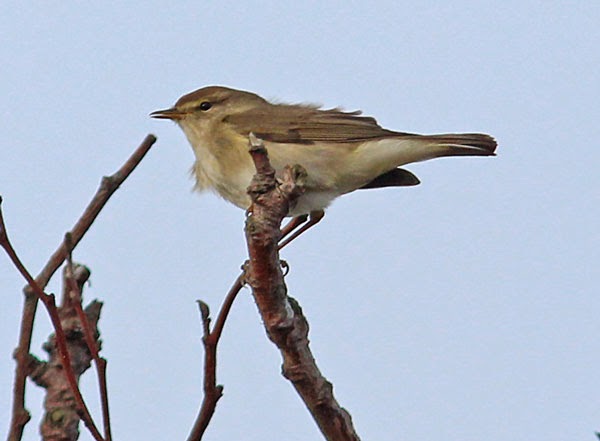 Next stop was along to Newton Point and Football Hole. A single Wheatear flitted about even more flighty than last week's bird, though this time it was a female. 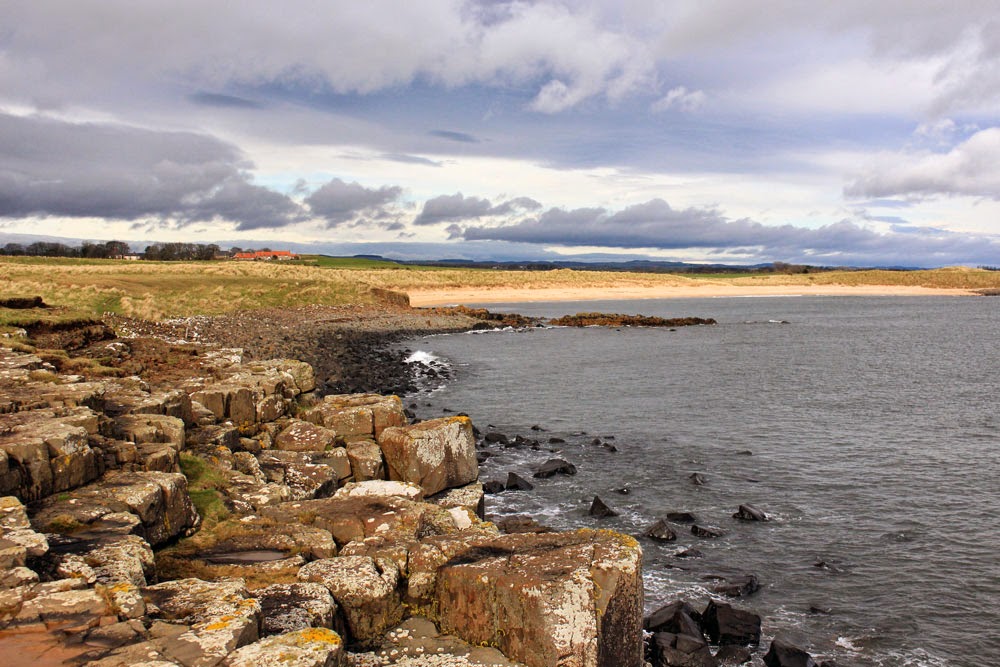 At home, the moth trap had done well last night ( see here) but I thought I would get a photo of this Ophion obscuratus ( I think). We catch several species of Ichneumon flies in the trap but I dont usually look at them closely. Check this out, it literally has eyes in the top of its head! They look a bit like chopper motorbikes to me... 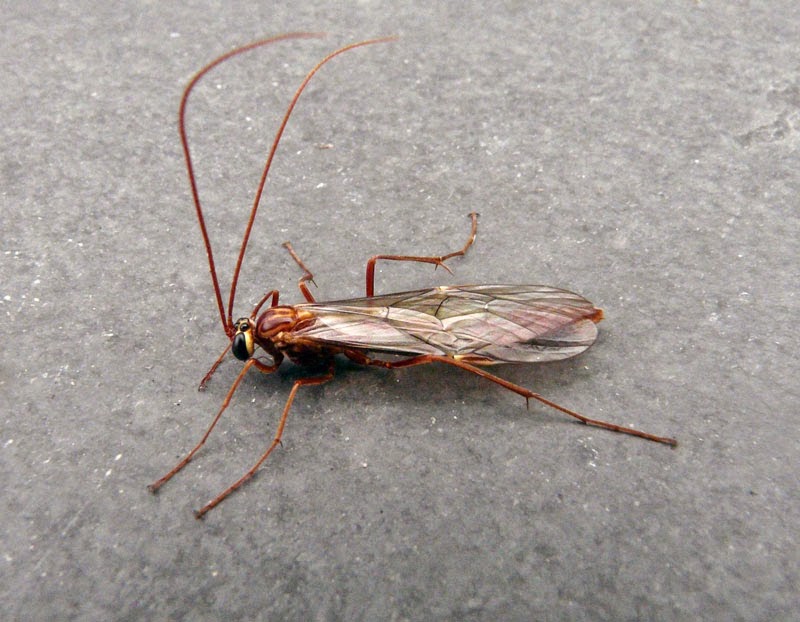 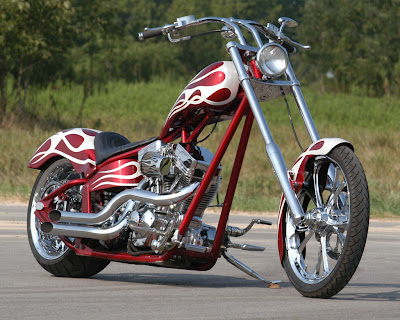