A quiet weekend for wildlife here. With the recent St Jude storm along the south coast, in particularly the west, we are possibly in the worst place in the UK to stand a chance of any of those wind driven yanks appearing. Still, I know those small trees at Porthgwarra where the Hermit Thrush is living, quite well...

Back up north, I didn't manage to catch up with the 'Robson Green' in the field, and had to make to with him singing the praises of our finest Northumberland on the telly. Like the Hermit Thrush, I am very familiar with the spots he frequented up the coast.

At Craster, a nice relaxed check of the Arnold and the bus car park didnt reveal much of note, but there had definitely been an arrival of migrants with many Blackbirds, a few Goldcrests and a couple of Song Thrushes new in ( by the way there was a Song Thrush in full song in our garden yesterday morning, not something I expect up here til the end of January at the earliest) and a Chiffchaff that was quite pale and 'eastern' looking.

Along at Boulmer a second winter Med Gull was dozing on the rocks as the waders gathered at high tide. There were 90 Dunlin, 3 Sanderling, 4 Bar tailed Godwit and many Redshank and Oystercatchers. Nearby at Longhoughton Steel, 1000+ Golden Plovers and 400+ Lapwings filled the skies in a stunning glittering display before vanishing as they landed blending perfectly with the rocks and seaweed.

The only other things into the book this week have been single Redpolls in our garden briefly before flying high south when flushed on two mornings....

A busy weekend, left limited time for birding. Most of my time was spoken for but a few well timed dog walks resulted in a few new patch challenge additions.

Firstly came late yesterday afternoon when a very quiet walk to the pond field was livened up by a gang of mixed thrushes plundering some ornamental rowans and hawthorns. Mainly Blackbirds, but with them were single Song Thrush, Redwing and Ring Ouzel. As usual for this time of year, the Ring Ouzel was  a drab first year bird with no collar but nice silvery wings and that distinctive 'chacking' call.

This morning started with a nice feel to it, a mild south easterly breeze with some light spots of rain and a leaden sky, that soon became more broken.
Instantly I could see, and hear birds moving over head so I wandered up the road to the Cullernose laybye for a quick count.

An excellent showing. I really enjoy viz migging when stuff is on the move...

At lunch time things really did kick off. Several messages came to me from friends both up and down the coast ( thanks all) asking if I had found a Siberian Stonechat south of Howick Village. There were conflicting messages from the info services, one said south of the village, the others said south of the burn mouth. This is quite a big area, so there was nothing for it than to start at the south end and work back north.

Luckily when  I got to the Howick Burn I could see Alan Hall and the birds finder, David Astins, intently watching the scrub up the bank.
They soon got me lined up and the cracking peachy coloured little Sibechat was down to 20 feet at times. Looking very whinchat like but without the eye make-up, this is my fourth for the county, but first since 2001 when I drew one for the cover of 'Birds in Northumbria'...


After giving it a good look on foreign soil, I retreated back to patch and looked back, it could be seen quite easily flycatching and tail flicking up the hill. A nice addition to the list...

This is the Howick one (below) from today, pics kindly supplied by David Astins ( cheers David, a great bird!) 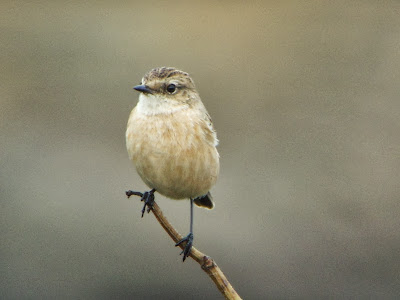 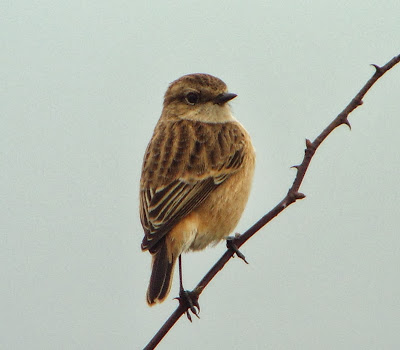 After some success seawatching before work on Thursday, Friday morning began in much the same way.

50 minutes worth of the sea from Craster found another 3 patch ticks and some good 'padders' too.

Being fired on by regular twitter posts from the work-shy telling how much they're seeing, I headed up to Snab Point for half an hour at lunchtime.The highlight here was a Great Northern Diver along with a nice selection similar to those above, including another 15 Bonxies and 8 Sooties.

Back home in the evening, a quick dog walk out while it was still light added a fourth patch year tick - a nice Snow Bunting running along the coast path ahead of us. More frustrating was the small passerine that lifted off the path and dropped into short grass ahead of us. It looked like a locustella or acro, but despite me zig-zagging around the field, it steadfastly refused to be flushed again.... must have been a lancy ( not a gropper or Reed or Chiffchaff or....)

After this, Saturday was a bit of an anti-climax. Seawatching had tailed off a bit, with an adult Mediterranean Gull N at Craster being the best. Another ( or the same?) Snow Bunting at Cullernose Point and a few more Redwings and Goldcrests upped the anticipation but that's where it ended.

Today was almost bird free other than 5 tardy young Swallows, west, over our garden.

I had planned a day off tomorrow but have decided I'll keep it for better conditions... 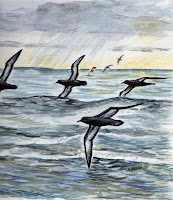 Last night the wind was a banging NNW, maybe a force 7. It gradually swung up to a direct northerly, the first we have had this autumn.

Not wishing to miss out on some good conditions, this morning I headed to the north end of the patch at Craster to do some seawatching from the car before work. There has been little opportunity for this, one of my favourite birding pastimes, this autumn.

In a buffeted 40 minutes I managed two patch year ticks - 3 Velvet Scoters and 4 Barnacle Geese plus 1 Sooty Shearwater, 2 Goldeneye, 3 Red throated Divers, 2 Purple Sandpipers amongst commoner species. I think it is still a bit too rough for a good passage, so maybe tomorrow will be better?

With the wind staying in the north east / eastern quarter until Monday at least, we might get a few more patch additions yet...I've already booked that day off work...