A day off today while a surveyor did an short inspection of our house. After he was done, I had a wander around with Peggy. Chiffchaffs are singing in profusion now but migration doesnt start here in earnest until about 10th April so we are stuck in the doldrums. Saying that, a patch year tick turned up with a first summer Mediterranean Gull with Black headeds feeding on plough just behind our house at lunchtime.

On the pond were 7 Teal, 5 Mallard and a Tuftie. There were no Crossbills around today despite them being around the village wood since January. Last week I had 16 together with 6 still this week.

In the invert front, Kidney-spot Ladybird numbers are now up to 5 on one medium sized Ash tree trunk and nowhere else!

This afternoon I had a drive to Alnwick Moors to check for Orange Underwing moths  at the spot we had them last April. It is still cool up on teh moors but I managed 2 individuals flying around the birches, unfortunately too high and actice for a photo.

I am so pleased that's over.

After spending about half an hour each evening, or more, after work all month processing images and working out slides, searching the net for pics I didnt have etc  I finally did my talk at our village hall on Saturday. It was an event to raise funds to pay for a new water boiler in the hall, so tickets were sold that included food and yours truly speaking. 60 people attended, filling the hall nicely where we were pleased to raise £370, after expenses, to our cause.

My talks usually last for 40 mins or so, but this one was supposed to be for an hour. As it happened, I was a bit over enthusiastic, and talked for an hour and a half! Luckily all the feed back afterwards was positive with everyone saying how much they enjoyed it all. My talks are quite light weight with a bit of humour added. There's nothing worse than sitting through a dry, slow topic in a darkened room. At least on Saturday no one fell asleep.

The talk was about those who watch birds rather than the birds themselves with explanations of exactly what we get up to. My good friend JWR was kind enough to allow me to make a good few jokes at his expense, because I have more 'birder photos' of him than anyone else, so cheers John!

Now, I only have to do an illustration for the cover of Birds in Northumberland 2018, and time should be my own again... 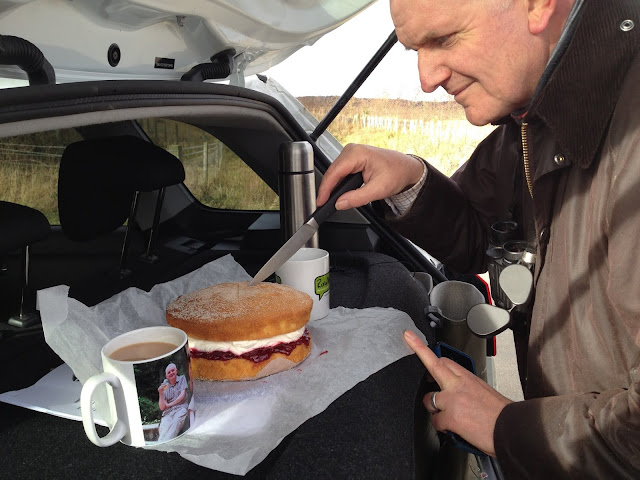 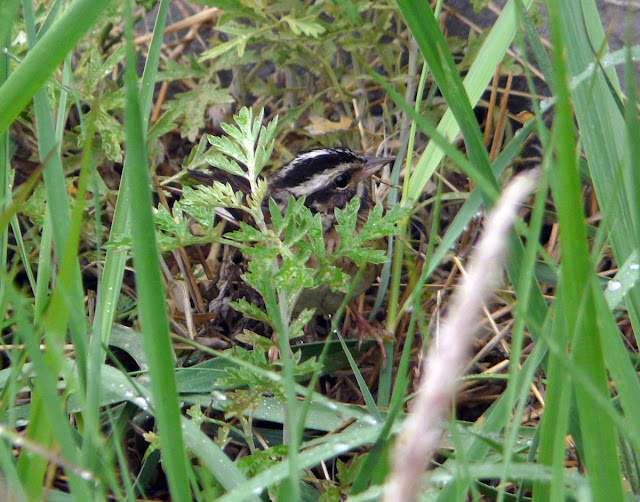 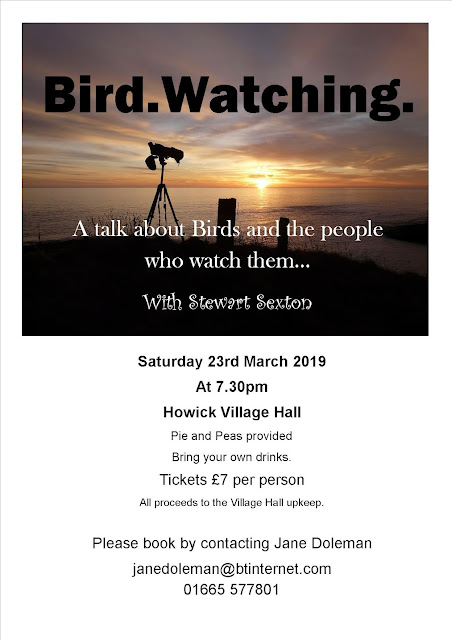 The lack of posts on here recently is due to this. Its amazing how long it takes to prepare a new talk, having to hunt through hundreds of images, process them, decide which to use, do a running order, make it flow etc etc.

I'll be back to normal after the 23rd!

As the month of February draws to a close, its time to check the patch listing stats.

February is always the worst month for birding on my bit of coastline. I have mainly cleaned up on all wintering visitors and resdents by the end of January and spend February adding a few that were overlooked, and hoping for spring.

This month fitted the stereotype perfectly. The month came in like a lion and went out like a lamb, a phrase supposed to be associated with March but global warming has moved everything else forward  so why not the prose? A covering of snow and temps down to -7 during the first weekend added a quick flurry to the list with Fieldfare, Redwing, Water rail, Willow Tit, Peregrine, Meadow Pipit and Collared Dove. More Crossbills, Barn Owls and Pink footed Geese added to the interest.

From then on it was all down hill. On 10th a singing Siskin was species 97 then in the warm, spring like days of week three, Coot  98 and Whooper Swan 99 arrived on the 25th.

This 99 species gives me 49% of my all time patch total score.

What will be species 100 be in March I wonder? Lesser black backed Gull or Redpoll is likely to be followed by Chiffchaff later in the month. Maybe the sea will be the key to some extra additions with birds like grebes and divers or white winged gulls shuffling around from other sites. Or maybe the small pond will pull in a Pochard (unlikely!) or a Wigeon?

Who knows? It will take the second week of April to arrive before the ticking can begin in earnest...

Compare this result against my blogging colleague Steve Gale here...