For a change I decided to head out early for the half hour drive north to Holy Island. At this time of year with an easterly breeze, and rain yesterday, its as good a place as any. I was hoping for a Red backed Shrike or Rosefinch maybe?  Alas, 'the best laid plans' and all that meant that it was not to be. All I could find in the way of avian migrants were singles of Tree Pipit, Willow Warbler and Chiffchaff. There would have been more in our village.

Well, at least the sun was shining, so I turned my face downwards to see if there were any inverts or plants of note. As I left the Excavations, above, this caterpillar was feeding on a dwarf or creeping willow right at my feet. Immediately I knew this was a new one for me and I recall someone posting a similar image on Twitter earlier this week - a Dark Tussock moth. Quite scarce in Northumberland with a disjointed distribution being found either on upland moors feeding on heather or down in the dunes on these low willows. A funky little chap with a badger patterned mohican 'do' it was quite easy to confirm when I got home.

A family of 5 fledged Tree Sparrows hunted around our lawn this evening, catching unseen invertebrates. One juvvy was a bit more sinister and seemed intent in pulling out my sweet peas. Thats him on the right.

Its great to have them breeding in my nest boxes again. No doubt there'll be more of them to come over the summer as they have up to 3 broods in a season...
Posted by Stewart at 10:36 pm 1 comment: 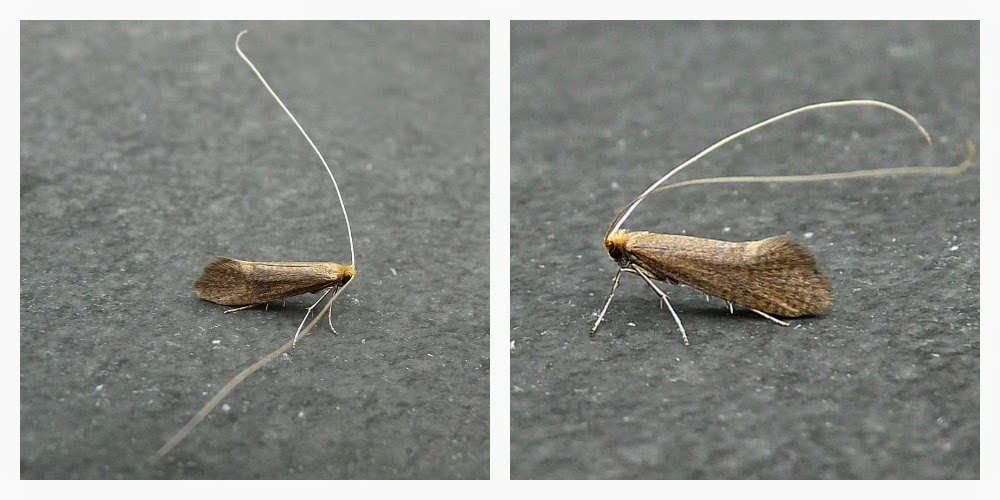 This was a new one for me in the trap the other night...I think it is Nematopogon swarziellus. Use that as your password!

Its not often we see butterflies going to roost but this evening I stumbled upon two Orange Tips only inches away from each other sleeping on Ribwort Plantain flowers... 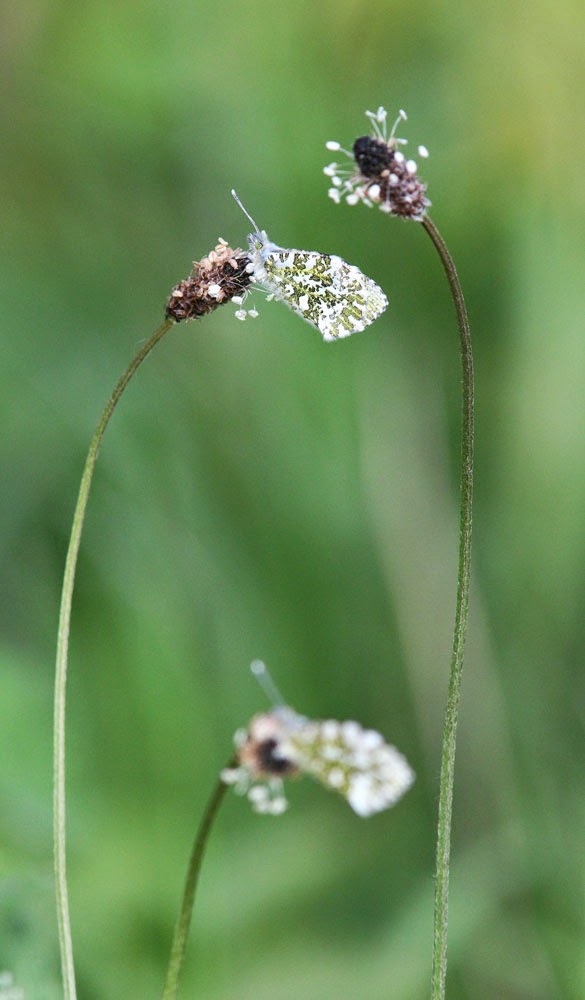 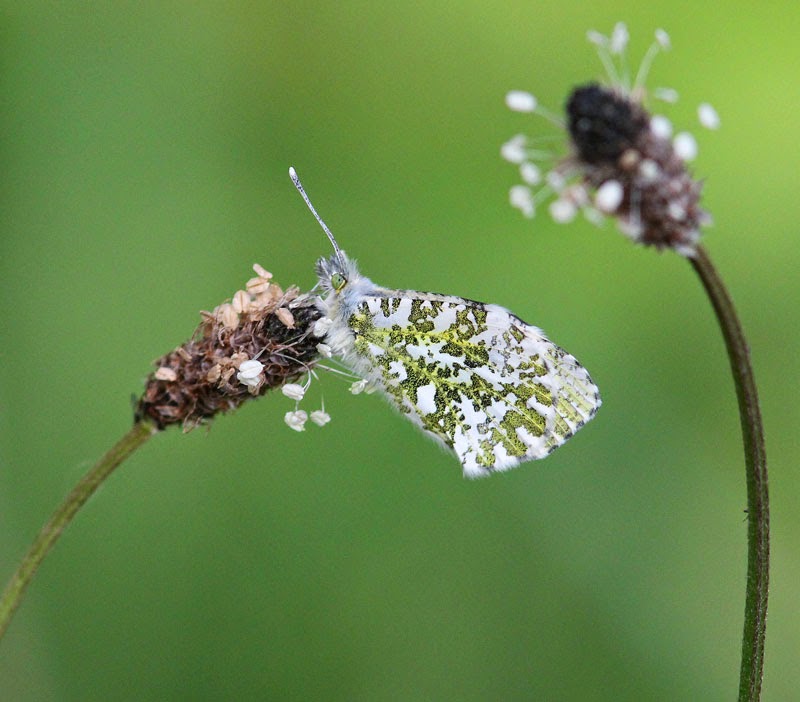 While looking I found this caterpillar on a nearby Cow Parsley. It was quite large say 3 inches maybe and looks like a geometer of some sort... Any ideas gratefully received. 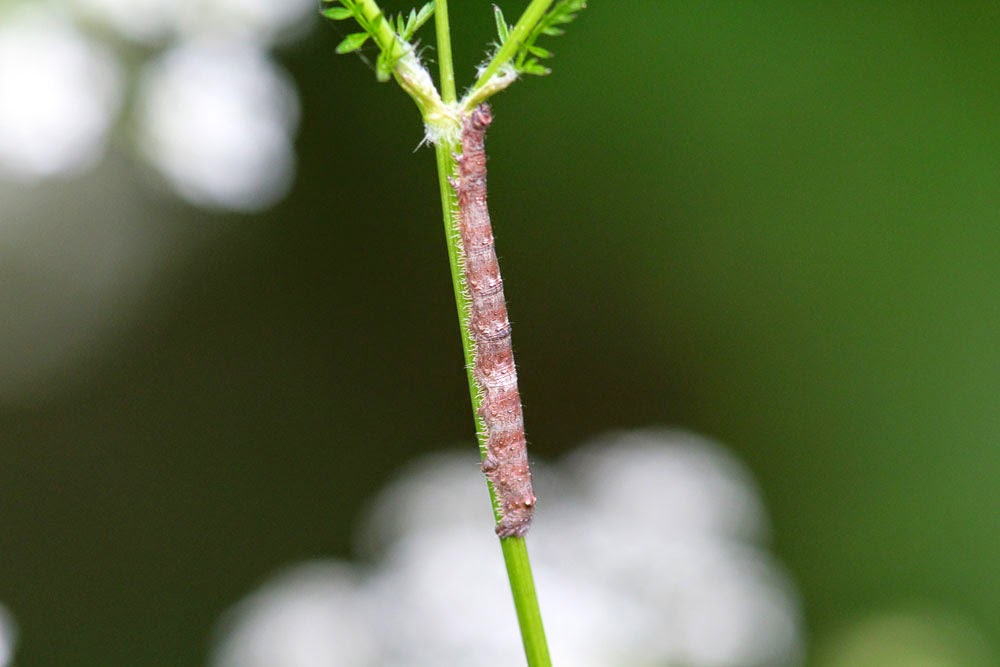 Posted by Stewart at 9:13 pm No comments:

All quiet on the bird front this weekend. I went up to the Long Nanny on the off chance the yellowshank was still there but no joy. Other than that, I've just been pottering around the garden. The variety of life just around the house is amazing, if you  just take time to look... 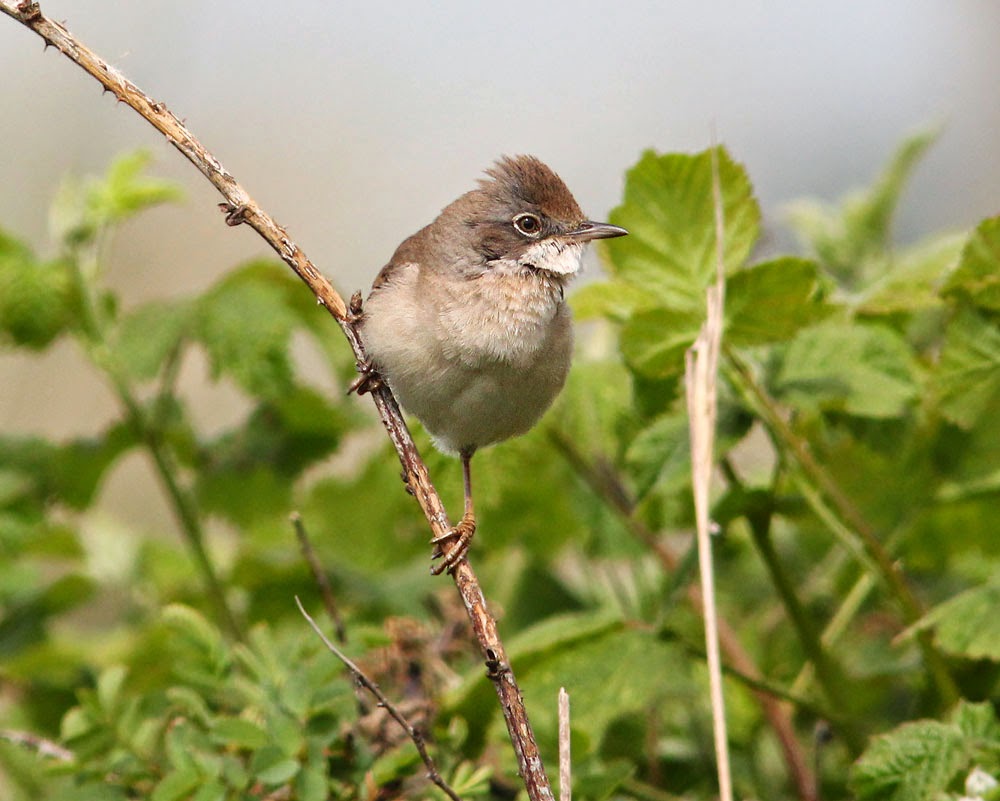 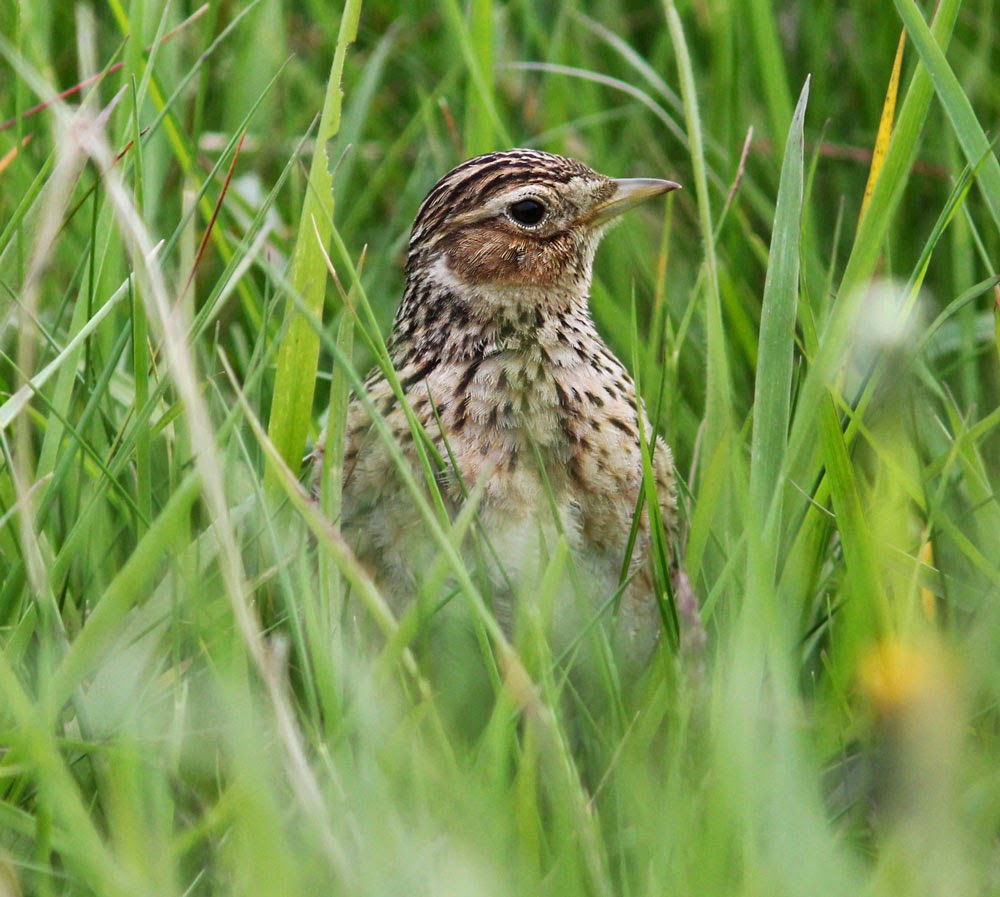 A few insects associated with the moth trap this weekend too - 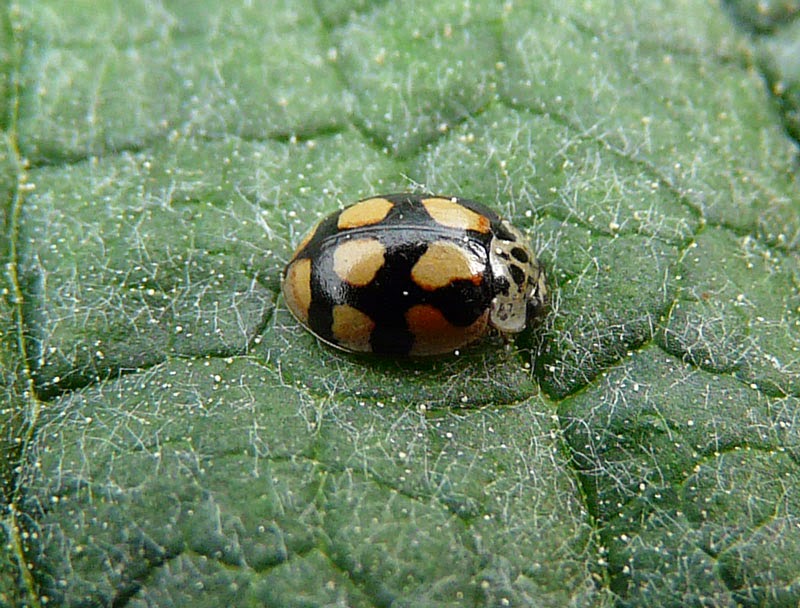 As you may have seen earlier, we have a small mammal table near our bird feeders where we feed at least 2 Bank Voles and 2 Wood Mice. Tonight I have just been watching two of each getting stuck in...

I had to crank up the iso on the camera as the light is going  but you can see the visitors. The Wood Mice fed on the top level approximately 12 inches above the lower log frequented by the Bank Voles...In fact the scene is pretty much like looking at both of these photos like this - 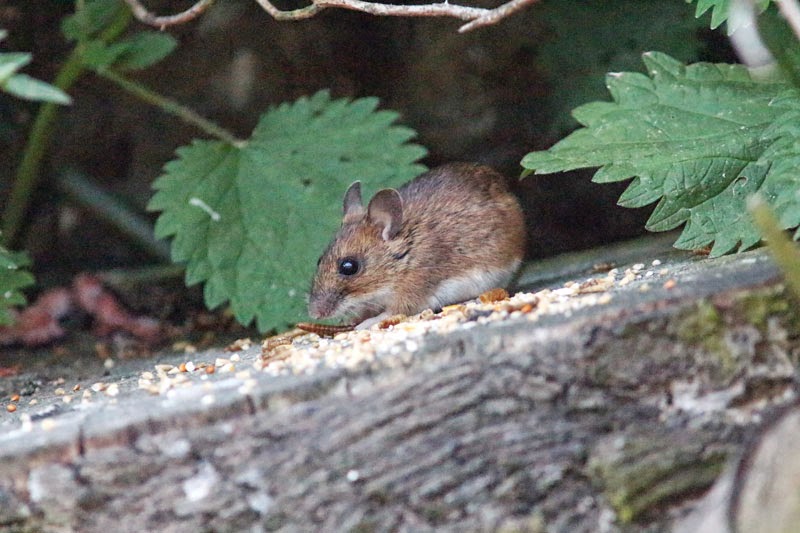 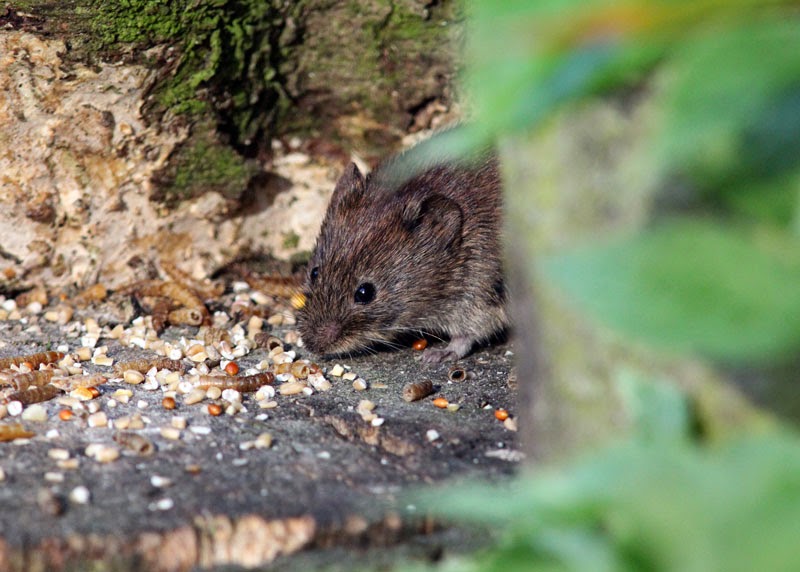 Posted by Stewart at 7:54 pm No comments: 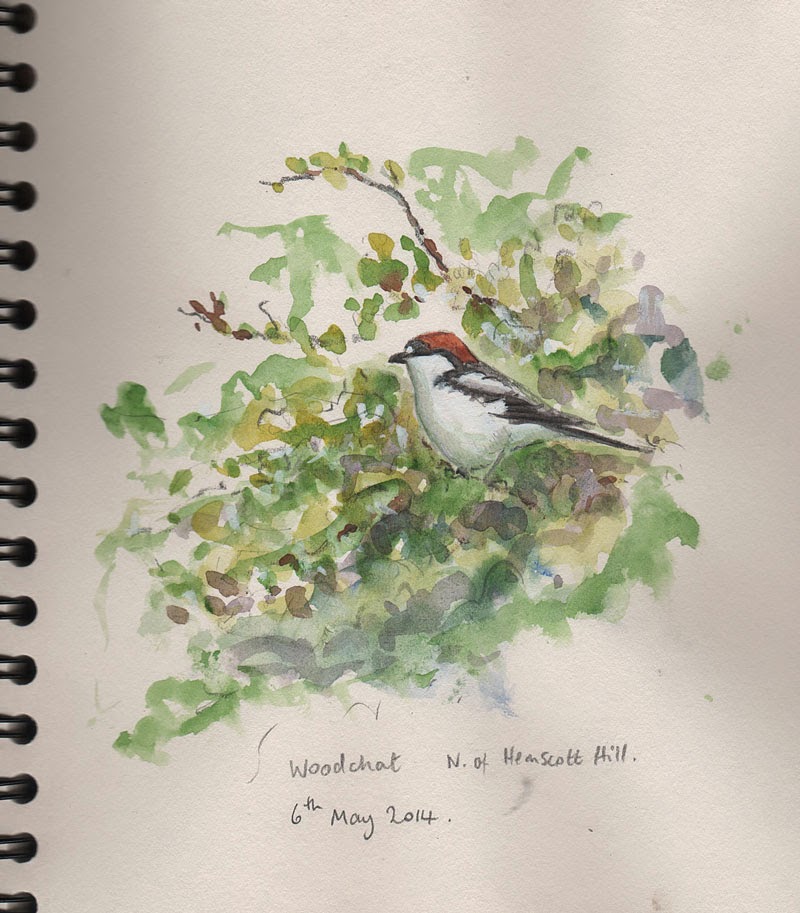 A late posting of the Druridge Woodchat from a couple of weeks ago...
There has been some comments that since getting the new camera, there have been very few sketches on here. Point taken. As the bird was miles away, here is a quick scribble.....

A trip up to the land beyond the Long Nanny this morning for the Beadnell Lesser Yellowlegs was a failure, the said target having continued onward migration yesterday.

It was a cool breezy day, today, but at least the rain mostly stayed away. After gazing at an empty flash, devoid of birds for 10 minutes, we headed over the the tern colony on the shore for a look. Hundreds of Arctic Terns were pairing up, but only 4 Little Terns were present. A dark phase Arctic Skua was a nice bird to get in the spring here as it hunted off Beadnell harbour. 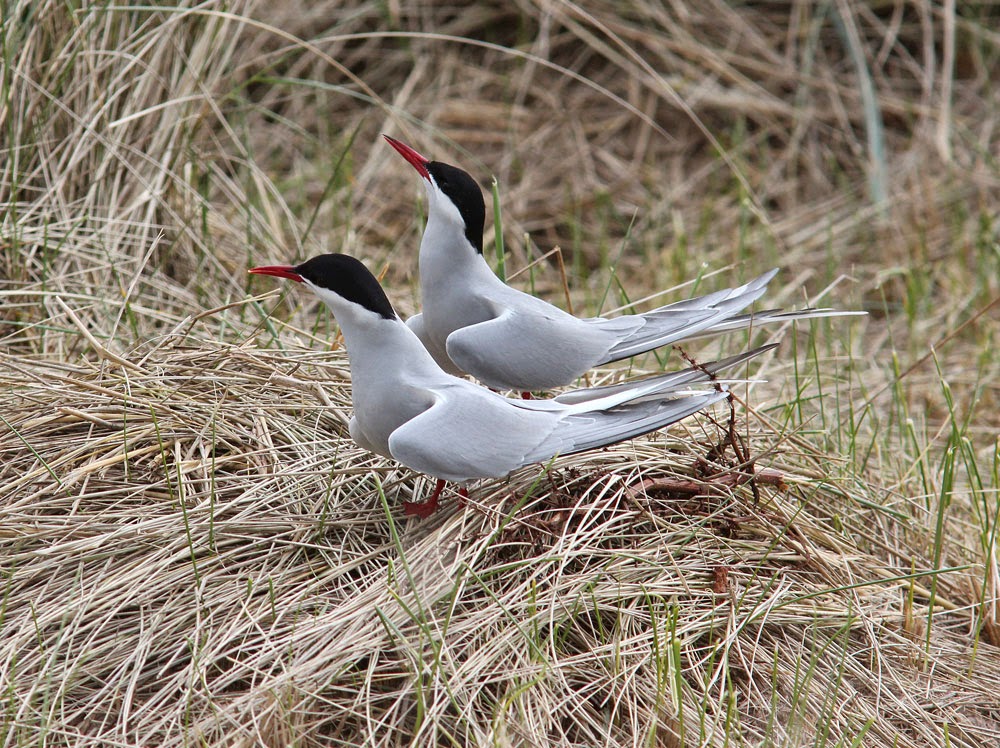 Next stop, the Tin Church and Pool.

Straight away a Lesser Whitethroat was heard singing from the scrub, along with 2 Common Whitethroats and a Willow Warbler.

The scrapes were as empty as I've ever seen them, with only 1 Teal, 2 Shelduck and 2 Gadwall. The pool wasn't much different, but a Reed Warbler ( or two) singing over the far side was noteworthy.
As the sun came out and the temperature rose slightly, a few insects emerged in the pool willows including 1 Orange Tip, 3+ Green veined Whites and a few hoverflies that remain to be identified. Celery-leaved Buttercup was in flower in the damp areas.

As news of a singing Western Bonelli's Warbler at Newbiggin was released, I was soon in the car and away, not knowing that my potential British tick had already gone. Well, not to worry there'll be another, and as a consolation, a self found Common Crane, flying south wasn't too bad.

Back home, a new visitor to the feeders today had me scratching my head... 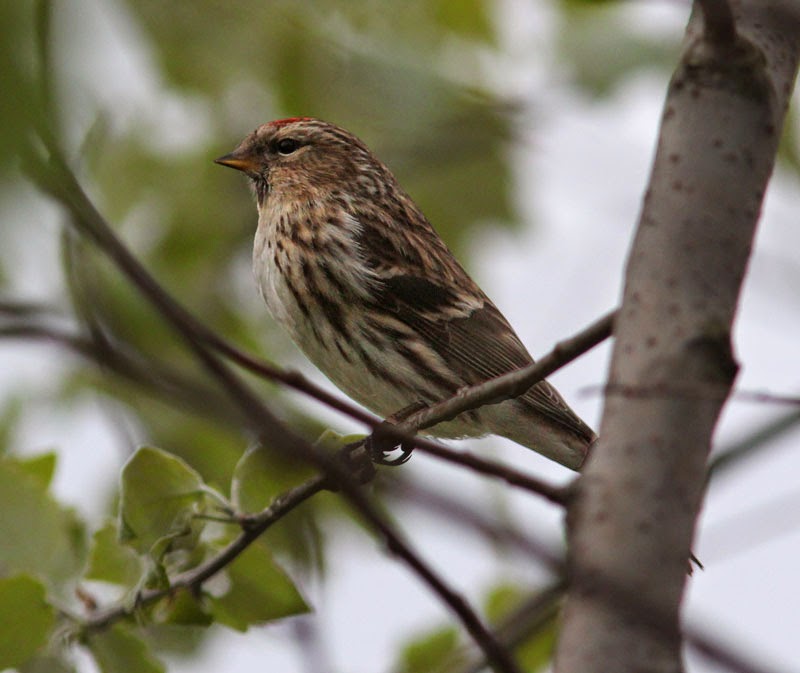 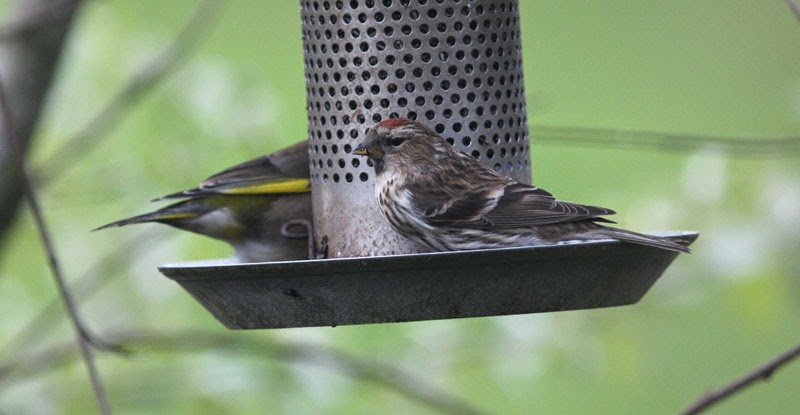 At first, this Redpoll, a first summer male, looked like a Mealy when on the feeders. It had pale braces, and was quite large, but later scrutiny makes me think its just a Lesser now. Smaller bill, brownish tone etc. It will be going down in the notes as 'Redpoll 1fs' and thats that. Please excuse the pics, like the Lesser Whitethroat below, they're through the kitchen window...

I see that the first Northumberland Woodchat for 20 years has turned up at Druridge this afternoon. No rush for that one having seen the last one found by Dave Elliot at Hadston plus a few more around the country over the years. I'll call in to see if its around on my way to work in the morning...

Looking from the kitchen window this evening at dusk, 2 Bank Voles and a juv Wood Mouse fed together, right out in the open, often jumping around each other, below our bird table. Watching this scene had me thinking that many people would have been on to the council by now...

I say the Wood Mouse was a juv as it was physically smaller than the voles, which the adults are not. Weather permitting tomorrow, I'll try and get a photo. I'll need to time it so the light is ok but the birds are going off to roost so they dont frighten my rodent residents...
Posted by Stewart at 11:35 pm 3 comments: