This has been a good autumn so far for Curlew Sandpipers in Northumberland. Down on the shore at Boulmer there are still 4 juvs with 300 Dunlin, 36 Ringed Plover and a few Turnstone feeding on a mound of rotting seaweed. The birds change over on a daily basis so it is worth keeping an eye on such a concentration because they may just carry something even rarer. Close scrutiny today, however, didn't reveal anything else.

As I drove home from work I passed Warkworth and saw that the increasing tide was already a shade too high for birding, so I popped home then headed down the road to Boulmer. Its a while since 'Boulmer Birder' has actually been on site due to some nasty environmental changes there, but it is still a good site for waders so I gave it an hour this evening.

Three Yellow Wagtails flew from the rotting seaweed pile. I then had a walk along to Seaton Point where more Dunlin, Redshank and Oystercatcher were up the tide line with 35 Turnstones and a Whimbrel. By now the light was going so it was time to head home for tea...

This morning started bathed in lovely sunshine, a great improvement to yesterday's deluge, so we met up at Warkworth top car park at 6.30 hoping for a few migrants. Well we certainly got a few migrants but not of the kind we expected!

The rain and easterly yesterday looked as if there might be a Pied Flycatcher or even a Barred Warbler to be found but the clear night put paid to that idea. But as we searched, a very respectable list built up slowly and surely, with the help of our friends of course.

'Bush bashing' around the car park, a metaphorical term to describe searching thick scrub for birds, turned up 1 Wheatear, 3 Yellow Wagtails, 2 Chiffchaff, 4+ Willow Warbler, 7+ Whitethroat, 2 Blackcap, 1 Sedge Warbler and 2+ Reed Warblers. On one of the circuits a female Marsh Harrier appeared briefly over head as did 2 Little Egrets and a couple of Swifts as they headed south.

A walk down to the estuary initially seemed a dead loss until we poached some luck from Barbara and her husband, a nice couple of Warkworth residents, who stopped for a chat. At this point we found 4 juv Curlew Sandpipers and a very low flying juvenile Osprey heading up the Old Water. This is my first Osprey at this site despite many hours of coverage over the years, so it is a definite highlight of the year so far.

From the north side, I was checking the distant Dunlin and noticed an different looking bird with them, facing away and remarked to John. 'Its only half an hours walk around, we can check from the south side' was the reply. A good idea. But, the best laid plans and all that, the Osprey, Curlew Sands and a nice group of 9 Black tailed Godwits shook the thought from my mind...

Back at the car, info came through about the annually visiting Caspian Gull in Amble Harbour had been joined by an juv Yellow legged Gull ( found by Birdwatch mag editor Dominic Mitchell no less) so we decided to check them out.

The Caspian Gull posed well on arrival but we were too late for the YLG so had to make do with two 99's with monkeys blood instead. Well, when mingling with tourists we could hardly refuse...

A short stop in an estuary lay-bye along the road to see if the gull was roosting upriver proved fruitless, but as I scanned with Johns scope I checked the Dunlin...again at a little distance, was a strange looking bird, this time head on. Ah, its just a juvvy Dunlin, I casually thought and lunch was now calling, so we decided to call it a day.

No sooner had I lifted my gear into our house 20 minutes later than a message came over the phone from the eagle-eyed ( and clued up) young Mr Farrooqi Jnr to say that he had found a White rumped Sandpiper on the Coquet estuary... ( groan....), so it was all about-turn and off I went again...
A small crowd had gathered at Amble Marina by the time I arrived and the White rumped Sand was showing very well just across the rising tidal river with a few Dunlin, and now an adult Curlew Sandpiper and 5 Knot inc 3 sum plum adults. It was a nice moulting adult too and overdue for the site. Thanks to Jonathan for getting the news out so quickly, a great record for the Coquet...
Posted by Stewart at 11:24 pm 2 comments:

Last night a brief stop on my way home from work to scan the Coquet Estuary from Amble marina didnt look promising. The tide was high and a kid was messing around in a rubber dinghy on the water. I'll give it a few minutes, I thought. Then I noticed that the tide was just beginning to drop and the bespectacled teen in the boat was grounded on the prime wader feeding area.  His outboard had packed in, so he used his oars to punt himself into deeper water before rowing off into the SE breeze.

Over on the far bank waders began to gather including 50+ Dunlin a summer plumaged Knot, 2 Sanderling and a nice juvenile Curlew Sandpiper when all of a sudden, Harry Potter had magically restarted his outboard and was heading back around flushing the lot. Oh well, time for tea...
Posted by Stewart at 10:48 pm No comments:

I was over the moon to find this lovely Dusky Sallow Eremobia ochroleuca as the very first moth out of the trap this morning. It is the first for VC68 and only the 4th for Northumberland. County Recorder Tom Tams thought it might even be the most northerly UK record to date!

Its not often I get a new macro moth for the garden these days, but there may have been two new species in this mornings trap but the jury is still out an a particular Pug that I fancied may be Slender? [Consensus seems to agree with me, Slender Pug it is, a two new macro day can't be bad!] 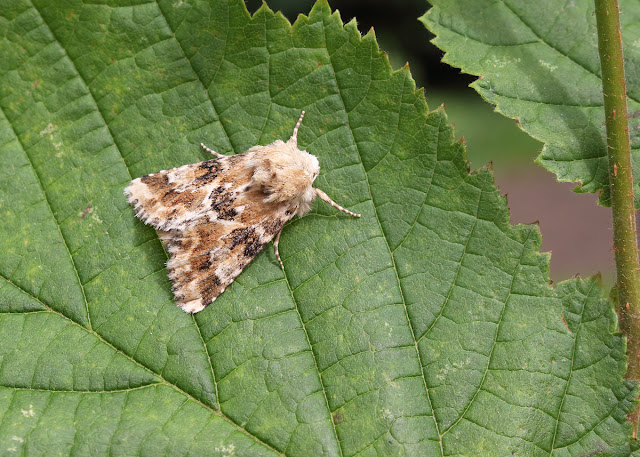 Its quiet here this weekend. Jane is away down to Northants to see her sister and toddler. This leaves me and Bunty to lol around, make a mess and eat junk food. Nothing new there then.

Today has been lovely sunny and warm but that is due to change, big style. Tomorrow we could get 40 mph winds from the west. Pity it hadnt been from any other direction but west is good for nothing on the North East coast. After getting some jobs done we have been catching some sun and taking some photos in the garden and around the village. Its a pity there was very little wildlife to pose.

I cut my small meadow patch down this morning, and will leave the cuttings for a few days. It hasnt been as good this year as previous years, I think because I didnt cut it hard enough early on and stopped cutting too soon. This left grass to choke out a lot of the flowers. I'll try harder next spring.