I find a Pied Flycatcher.

Now before you poo-poo this lets see it in context. This is only my third Pied Flycatcher on the patch, and the first since 2010. Rarer than Yellow-browed Warbler, Pomarine Skua, Waxwing, Little Auk etc and equal to Barred Warbler and Osprey.

Yesterday morning I was out early to check the thick wooded cover at the Craster Arnold Reserve, the northern end of my Patch challenge patch (?). It was clear and calm early on and the grass silver with dew. The sun later became warm and a lot of birds were calling and flickering about in dense sallows and sycamores.

The first bird I got on to was a bright little Yellow-browed Warbler, followed by a Lesser Whitethroat, that came up from a ditch calling. Chiffchaffs and Robins seemed to be all over and 3 male Blackcaps added variety. Then a call from higher up the bank made me stop and listen. Now, I often get Pied Fly and Redstart mixed up as I only see them infrequently but knew this was one or the other. Its 'sweet sack' 'sweet sack' tone seemed very active moving from tree to tree quite high up. It took me the best part of an hour before the bird finally came into view and showed well in full agitated wing-flicking mode.

At least while I waited a Willow Tit kept me company.

Further along, a second calling Yellow-browed remained elusive and a steady high movement of Meadow Pipits and Skylarks flew south... 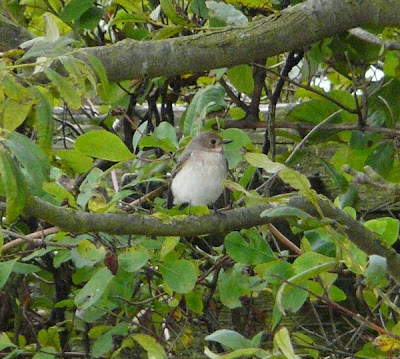 "Oh Evie, do come quick and bring your gun, there's a dear little Piedy Fly on the lighthouse wall..."
Miss Leonora Rintoul, Isle of May...
Posted by Stewart at 10:22 pm No comments: 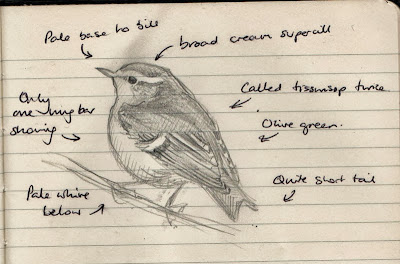 Mid week saw a huge arrival of Yellow browed Warblers into the UK. By Wednesday Northumberland was decked out with them, with massive totals - Holy Island 17, St Mary's 10, Farnes 9, Low Newton and Druridge 4, Hauxley 2 etc. I finished work early and visited the north end of my patch at Craster where Yellow brow habitat abounds without a sniff. The highlight here were a couple of juvenile Ringed Plovers that were new for the year, but passerines were almost non existant.

Since then, each morning I have listened out before work to see if I could get one calling in the copse next to our garden, but every day has been quiet.

Until this morning. I was out doing the moth trap when that distinctive quiet 'tssswissp' call came from a hedgerow sycamore across the back field behind our garden. Over I went, and the calling stopped. It seemed as though the bird had flown but then a flicker low down caught attention and there it was, a nice little stripey Yellow browed Warbler all the way from Siberia. It showed well in the morning sunshine feeding around the hawthorns in the company of two Chiffchaffs and a male Blackcap.

No matter how many of these you see ( here they are about annual) you can never be blase. The first and commonest of the sibes, lets hope their numbers continue to increase and arrive here each autumn.

This afternoon 3 Bramblings flew over calling, showing that the easterly winds are moving birds over us. If only we had some rain to ground them...

Well that's our last week's holiday of 2013 finished. We have been up to Allt Beithe, Arevegaig near the Ardnamurchan peninsula for the week.

The weather was mainly good with sunny,clear days except for Wednesday and Thursday when overcast skies and rain took over. Our time was spent exploring the area, a place we know quite well now, this being our third visit since 2007 and just getting into a relaxed mood away from it all.

When avoiding the omni present scottish midgies, I was on the look out for the usual specialities of the region and trying to get an introduction to the fungi, something that is quite new to me. A few were identified but many more were admired and left unnamed. Highlights of the week included a young White tailed Eagle on the Morvern peninsula that soared from cloud height all the way down to eventually land on the hill opposite us giving great scope views. Two Golden Eagles gave similar views near the Ardnamurchan Lighthouse, both showed similarly well, perched yards apart on a rock not too far from the road ( well scope range anyway).

An Otter fed in the bright sunlit, oily calm, waters of Loch Sunart one day, but our garden Pine Martens refused to play ball. They came each night and cleared the food, once while we were watching TV, but we didn't see them. 35 Red Deer hinds and calves were on the mire outside the garden gate. A group of Bottle nosed Dolphins were off Kilchoan shop one day, while later a group of Porpoises, 4 adults and 4 young fed in a bay more suited to otters than cetaceans well up into the loch.

These plus Rock Doves that looked just like a Rock dove should, daily Ravens, Buzzards and Hoodies, Common and Grey Seals, flower dotted verges and damp, ancient oak woods made for an excellent trip.

The moth trap came with us, the results of which go into detail here.

So, now back home and work, its time to get back out to see if I can add to the patch list, autumn is racing away now... 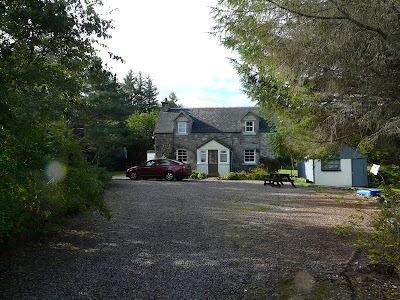 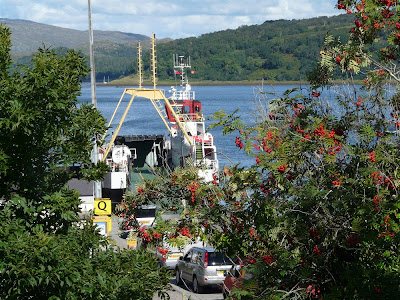