John picked me up at 7.30 this morning to head up towards Beadnell for a change. We could have nicely gone down to East Chevington for Shorelarks, Hen Harriers etc, but we're cool on those so we chose to avoid the crowds as usual.


At Beadnell Harbour, a Merlin tried to muscle in on a flock of 35+ Sanderlings and a few Turnstones, but it failed and headed south. Off shore, a ⚢Scaup was with Eiders in the bay, 2⚥ Long tailed Ducks flew south and 13⚢  Common Scoters flew north along with a couple of Red throated Divers and a handful of Gannets, Kittiwakes and a Fulmar.


From here we had a tea stop at Seahouses Harbour where an immature Peregrine flushed the waders on the rocks. I wondered if it was the same bird that had been on the Farnes this week as it headed off out there.

Then it was down to Low Newton. At this time of year we used to have the coast to ourselves. Not now. The place was busy with walkers, with dogs and without so we didnt see much. The scrapes had plenty of birds but nothing of note really. The pool is looking good where the phragmites have been chopped back allowing better visibility.

And that was it really, off home.

Back at home, I took Bunty for a walk along the lane and was over the moon to get some restricted but decent views of the Water Rail under the willows. A really good bird for here and one I don't see every year. While watching it, there were a few small squeals that may have been from a second bird in there. I'd like to get a photo, but until then here is a sketch  to be going on with...

For a change, this morning John and I met up at Seaton Point, Boulmer with the intention to walk around the headland, checking the sea and shore line for, maybe, divers or snow buntings or something like that.

It was bitterly cold, with a thick white frost and a light NW wind that numbed the fingers. As I waited for John, a quick scan seawards revealed a Great Northern Diver heading N and a diver calling on the sea that sounded like a Red throat but I couldn't see it.

Soon, John arrived and after exchanging pleasantries and commenting on how baltic it was, we headed off down the Seaton Point steps to the shore. Well, that was the intention. From the top of the steps I lifted my bins in the dawn light to check the seaweed washed up on the tideline and the first bird I saw was a pipit with a very white belly. I commented that this looked like a Water Pipit and checked with the scope, expecting it to be either a Meadow or maybe a littoralis Rock Pipit.

What a surprise when the bird I focussed on was as suspected, a nice winter plumaged Water Pipit.

'Spinoletta' is not a common bird in North Northumberland, though I have seen one at this very spot a good few years back that flew off inland minutes after my sighting. Hopefully this one would be different.

Out on the weed were up to 20 Rock Pipits including several littoralis types and a scattering of Meadow Pipits. Mix this lot with a dozen Pied Wagtails, 2 Grey Wagtails and a few Robins that kept flighting up and down the beach, and our bird was proving tricky to get to grips with. In fact, the next two hours was spent trying to get a decent close view.

As the morning became brighter we eventually managed to get some excellent scope views to clinch the required features and even a few ropy record shots ( I think John has done a lot better than me...).


From here we drove into Boulmer and walked around Longhoughton Steel that was largely bird free other than a few Linnets and 2 Red throated Divers S offshore.

Oh well, it only takes one bird and bit of excitement to make the day!
Posted by Stewart at 2:32 pm 5 comments:

After the birding excitement of recent weeks, today saw things slow up a little, back into the usual pace for winter birding in Northumberland.

I met John at Warkworth and as the weather was pleasant we just pottered around the area taking a few snaps and drinking tea. No change there then.

A short drop in at Druridge Bay Country Park was all but pointless, highlights being about 70 Tufted Duck and half a dozen Gadwall.

Back up the the Coquet Estuary area it remained pleasant but very slow on the bird front, until we stopped to check a herd of 24 Whooper Swans ( with 6 juvs) and were very surprised to find a flock of 64 Black tailed Godwits in the stubble alongside them! Whilst not a rare bird in the county, flocks of 10 in early autumn or spring are more usual so this large gathering was the highlight of our morning. Further over the road another 13+ Whoopers were feeding in a rape field.

Elsewhere, 1 Little Egret, 250 Golden Plovers, 11 Yellowhammers, a Brambling and a few Wigeon were all we could muster. A nice morning out though, all the same. 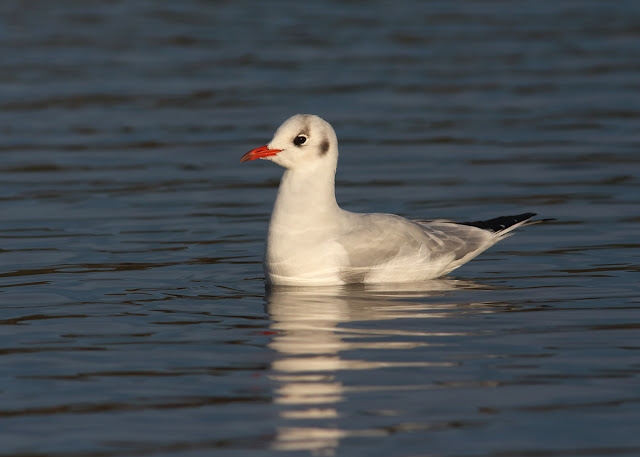 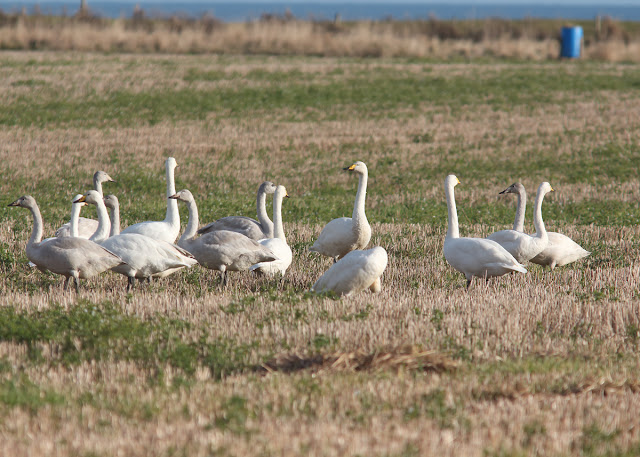 If you are a birder living in Northumberland you should count yourself very lucky.

We may be very impoverished on the butterfly, moth and dragonfly front, but we really do quite well for birds.

As a large, east facing county with a wide range of landscapes, an equally good number of species can be found all year round, but what we do excel at is autumn migration.

From late July - late November we get excellent passage of waders, seabirds that are second to none, both breeding and on migration, with things such as flocks of Roseate Terns, decent Skua movements, hundreds of Sooty Shearwaters and even thousands of Little Auks. All four divers are a real possibility if the weather is right. Wildfowl is good with seaduck, geese and wild swans aplenty, then we have drift migrants such as Wrynecks, Barred Warblers and Red backed Shrikes, and later on we do well for Sibes such as Yellow browed, Pallas's, Dusky and Radde's Warblers. Oh yes, the northernmost English county is a good place to be at the 'back end'. 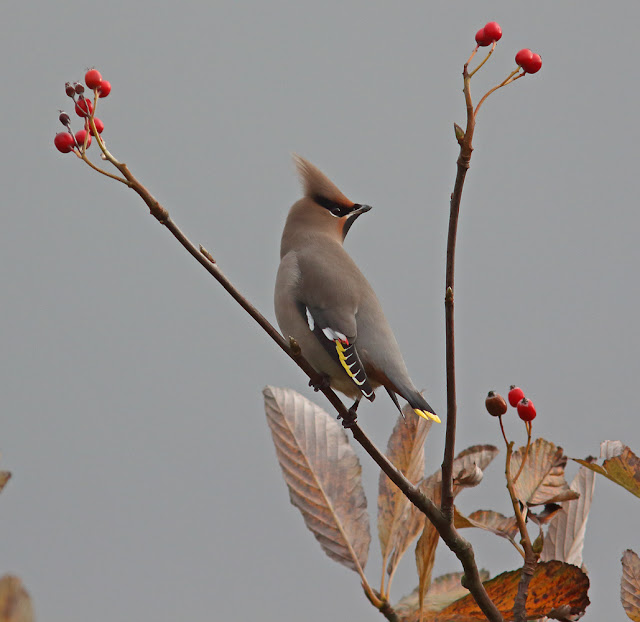 As Autumn draws to a close, another Northumberland speciality appears on a regular basis - the Waxwing. Whilst further south, a lone bird or a small party attracts a good twitching crowd, here we tend to expect larger numbers occasionally. In 2012, in the first week of November ( see these blog posts for a start) we were treated to over 100 of these lovely birds around our garden with out another birder to be seen ( well maybe one or two). Since then, I have had odd singles around the area but just to add to the already superb autumn here in 2016, this year is now turning into a Waxwing winter.

My first were on Monday when 35+ flew N past me whilst driving to work between Amble and Warkworth, then on Tuesday the game upped a little with 30+ at ASDA in Ashington followed half an hour later by 60+ at the south of the town near North Seaton Cemetery.

Today there has been masses of them around the county - maybe 350 in Ashington at three locations, three flocks along the A1 between Alnwick and Morpeth, including one of 200 birds, 200+ at Cramlington, 30+ in Morpeth and many other scattered parties.

Our spring birding may not be so good for overshoots, but would I swap? I dont think so... 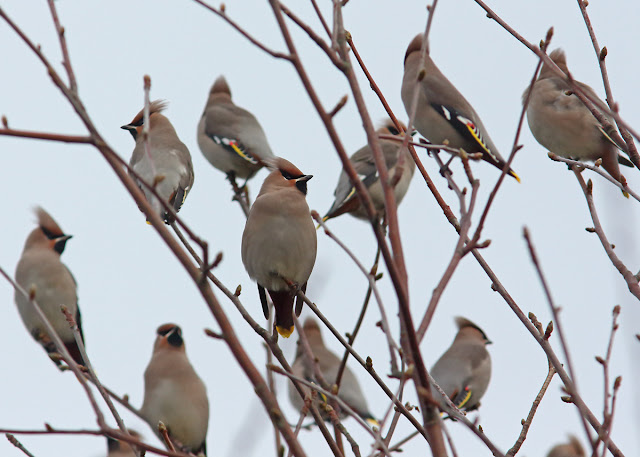 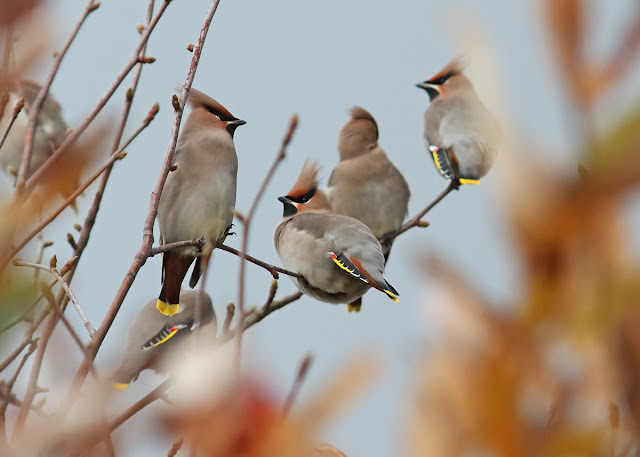 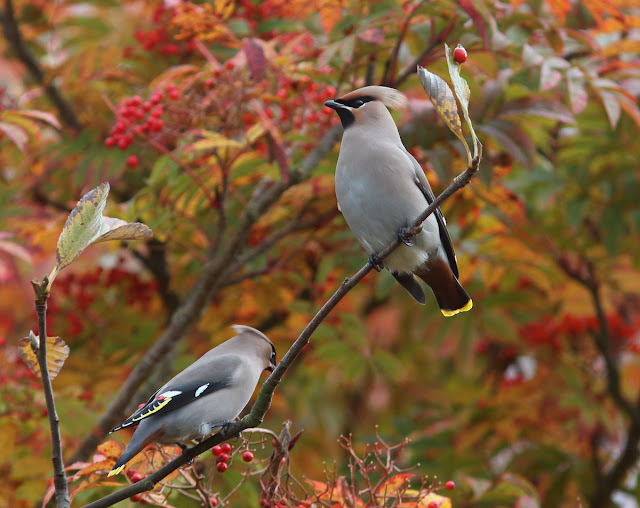