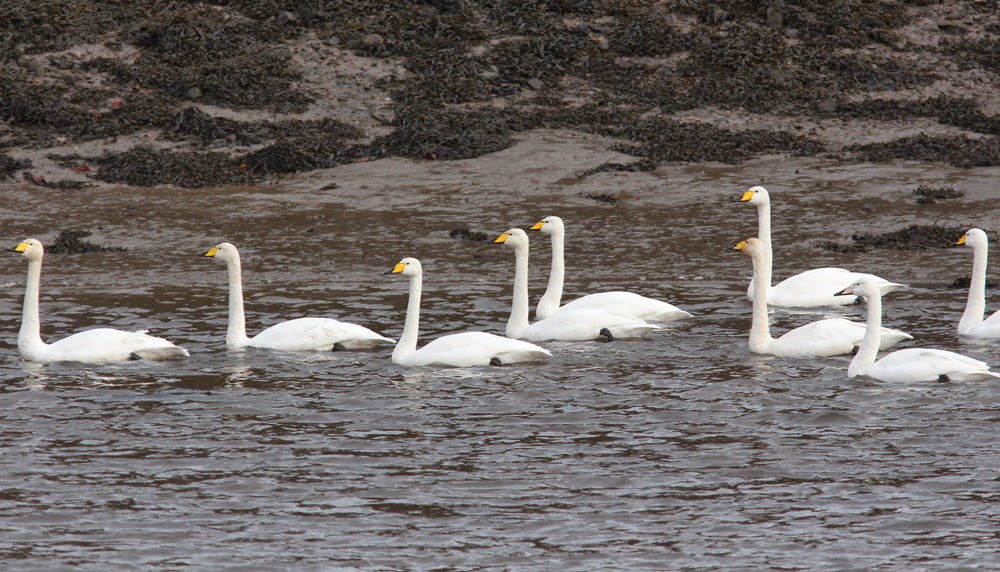 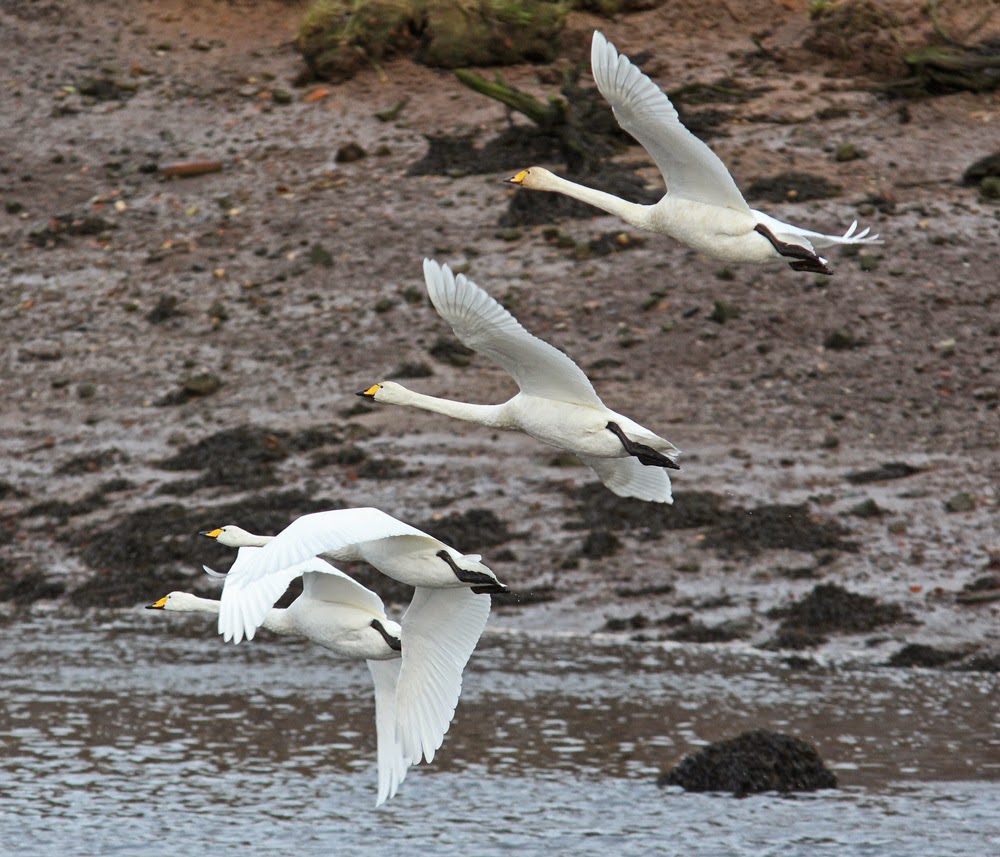 The weather was quite inclement this morning with a strong westerly wind and a few squally showers coming through. We had a trip to the Coquet Estuary, checking out Amble Harbour to Warkworth Beach car park. As could be expected in this weather, it was generally quiet, but a few things of interest were seen.

A party of 9 Whooper Swans arrived from the east to settle on the river below Warkworth weir for  a spell before heading off further south.  Nearby along at the Marina, a nice drake Scaup, a female Common Scoter and a winter plumaged Great crested Grebe swan around beside the boats.

There were plenty of Wigeon, Teal and common waders in wintering areas too.

Up in the scrub, only a few Blackbirds, Song Thrushes and Robins, with a male Stonechat gave cause to lift the bins...

As the days grow ever shorter, its easy to pine for spring or summer or easterlies or northerlies or whatever, but it pays to appreciate just what we have, every time we get out there, its all fantastic!

Moth twitchers that is.

Today was much busier than yesterday with visitors coming to see the Deaths head Hawk-moth. We had around 40 people including two lads who had come especially from Yorkshire to see it. Over the weekend we collected just over £60 in donations for our village hall which isn't bad for a moth.

This afternoon, the moth is livening up a few Facebook pages, sometimes alongside happy faced moth twitchers. For me though the highlight had to be when Richard Dunn managed to take a recording of the moth squeaking as it was handled. Now that's something that cant have happened too often. To hear it for yourself please click Here. But be careful, a Red crowned Crane kicks in immediately afterwards to shock you.

After everyone had gone we managed to get it to feed a little on honey solution. This is a tricky task, as the moth has to be man handled, then its curled proboscis teased out with a pencil and placed in the honey, where it sucks it up like a straw. I am advised by the interweb sources that after a couple of times, the moth gets the hang of it and feeds itself. Thank goodness for that!

I am sorry about this, but if you don't like insects look away now. This weekend is all about one insect in particular, the Death's Head Hawk-moth Acherontia atropos.

This morning a small, but quality, audience came up north to pay homage to our newly emerged DHM. It is a British specimen, the caterpillar having been found by Victoria Doleman, near her home in Northamptonshire. We can't thank her enough for being sharp eyed and having the foresight to wonder about the large yellow thing creeping across the path before her. Cheers Vic!

A month later and we have a pristine example of Atropos. It is quite a subdued fellow, spending most of its time motionless while guests filled their cameras and phones with Halloween images, an opportunity that might take a very long time to repeat.

Today was the first time we have carefully handled the moth, and were eager to hear its well known 'squeaking' behaviour. Everyone was delighted when it ran up Jane's arm squeaking like mad, waving those white tipped antennae around and flashing blue and yellow, body and hind wings.

If you would like to see it, please give us a visit tomorrow morning, where we will be at Howick Village Hall again from 10am to 12 noon. We are about 7 miles east of Alnwick, just south of Craster, on the coast.

Expect more of the same on tomorrow's blog....its well worth it. 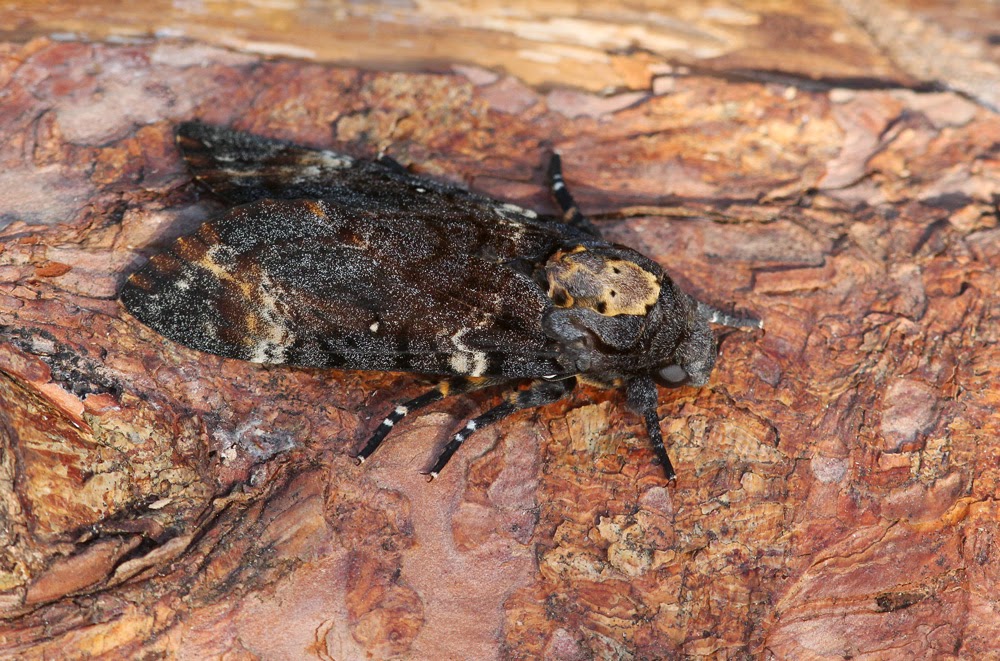 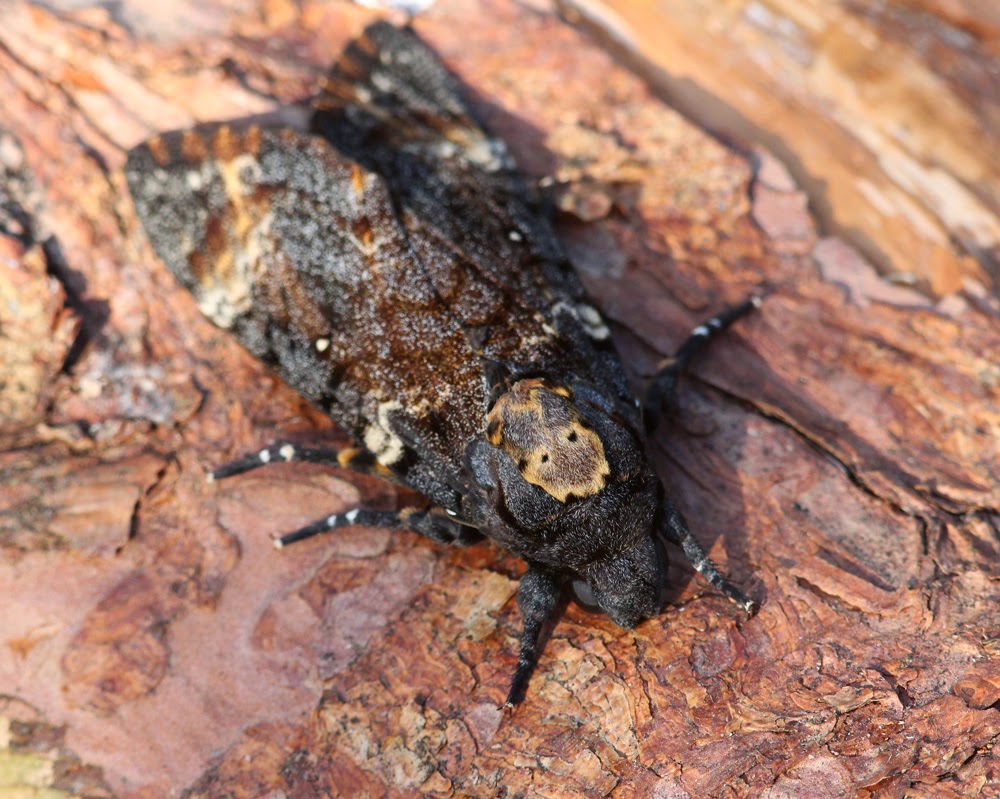 Atropos hatched overnight. I checked before bed and there was a black pupa, but this morning a nice fully formed Deaths Head Hawk-moth had emerged and was hanging on the tank side, fresh as a daisy.

I snatched a few blurry pics in the half light before work this morning, but hope for better tomorrow.

If you are passing and would like to see the moth, I will be having it on display at Howick Village hall tomorrow and Sunday from 10 am - 12 noon. There will be a small donation to the village hall coffers...

[I have tried to email everyone in my address book today and have frozen my emails in the process, so I'm stuck until I can get help.] 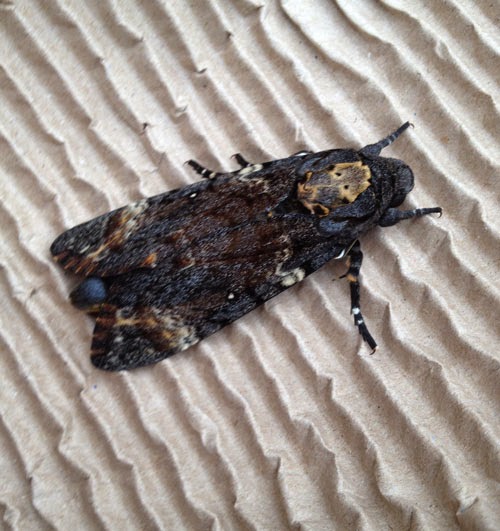 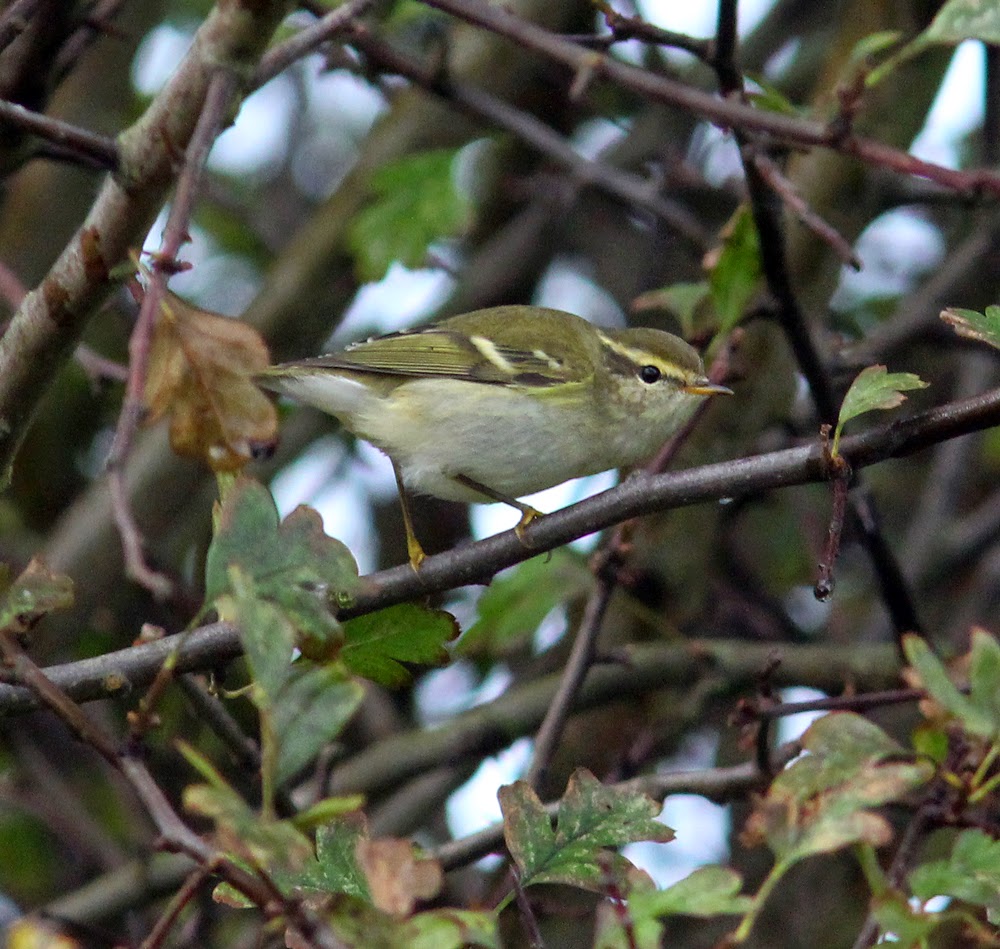 A day off work today to visit Holy Island to look for migrants. With the wind in the east now for a few days, and rain forecast, the charts seemed good for a few birds to arrive. Bring on the bluetail!

As it happened, it was a reasonable day out but not all it was cracked up to be. Rain and over cast skies made viewing tricky and there just didnt seem to be many birds around. There had been a small arrival of Thrushes, with a couple of hundred Redwings, 50+ Blackbirds, 3 Ring Ouzels, 1 Fieldfare and some grey dark continental Song Thrushes. Half a dozen Bramblings 'wheezed' from the sycamores and there was a nice sprinkling of Goldcrests.

Three Yellow-browed Warblers were in the vicinity of the Vicars Garden with two of them chasing around over the open field next door. The one in the photo nearly flew in to me before landing and turning around to see what the hell was that standing in its way!

Also here were an 'eastern' Chiffchaff probably 'tristis' but it didnt call, alongside a usual 'collybita', a male Blackcap and a good number of Robins. Two Black tailed Godwits flew overhead.

While walking along to the Chare Ends, a Water Rail got up at my feet from a patch of Meadow Sweet, flew around then dropped back in, where I left it in peace. The Lonnens and Lough were quiet but a few Little Gulls were off shore.

A Merlin and a Little Egret rounded up the day nicely along the cause way on the way off. If you throw in hundreds of Pale bellied Brent Geese, Bar tailed Godwits, Knot and Golden Plover, I suppose it wasnt a bad day after all... 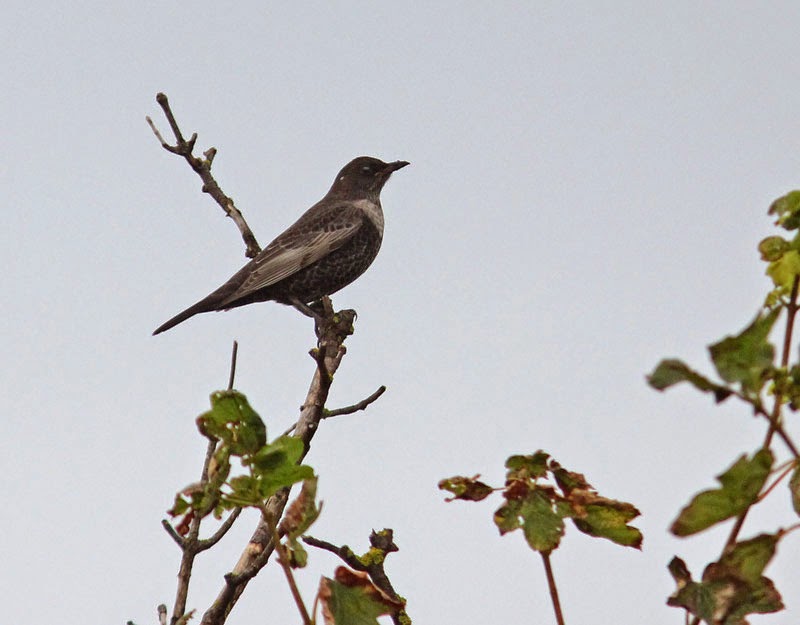 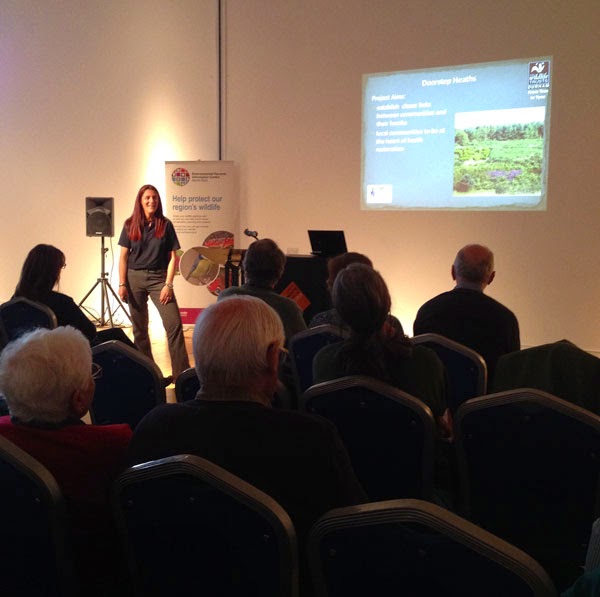 This morning Nigel and myself took a trip to the Hancock, oh alright, the Great North, Museum, to attend the ERIC [Environmental Records Information Centre] conference. There were eight short talks, refreshments half way and a buffet lunch at the end, all for free, what's not to like !

All of the speakers were interesting with seven of them being professional ecologists and the like, however, my favourite was the only amateur in the line up, Pat Robson. She discussed her particular project, the environmental side of a village atlas production at Hetton le Hole in county Durham.  Her investigations into the biodiversity of her village has lead on to other conservation matters such as challenges to planning applications that are placing habitats at risk, and reporting pollution incidents in her local water sources. She is now quite into the River Fly project, studying the invertebrate life of her small streams and local nature reserves.

It is this type of thing that should inspire us, as amateurs, to get out and enjoy what we do and if possible, try to help the environment in some way, no matter how small.

It was nice to attend such a varied and friendly event like this. There were about a hundred attendees, and all seemed to enjoy it.

I am looking forward to next year's already!


This fungi is in our local woods. Its quite big, about 10 inches across. Is it an Oyster Mushroom?

[As Nigel recommends, I had considered this was Branching Oyster but they are so variable, these fungi...]

I have removed yesterday's post, as today it looked like a bit of a rant. Many thanks to those who bothered to leave comments though, they are always appreciated.

I see there has been no sign of the Red eyed Vireo today? Its a shame, it would have been a great one to get on the county list. That's two records for the county now, so who knows, there might be a third, one day...
Posted by Stewart at 6:45 pm No comments:

Another couple of autumn moths...

A death's head update amongst others... 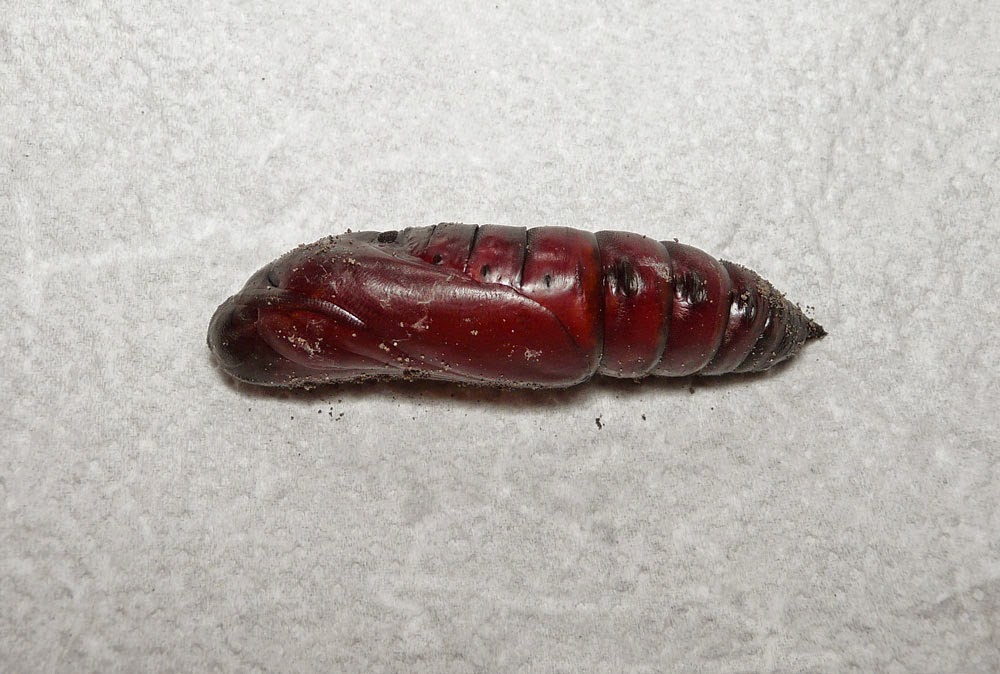 Tonight we excavated the Death's Head Hawk-moth pupa from the soil after going to ground two weeks ago. Its about 65 mm long and if all goes well should emerge into the much sought after adult in a couple of weeks time. Watch this space...