The last of the sunshine.... 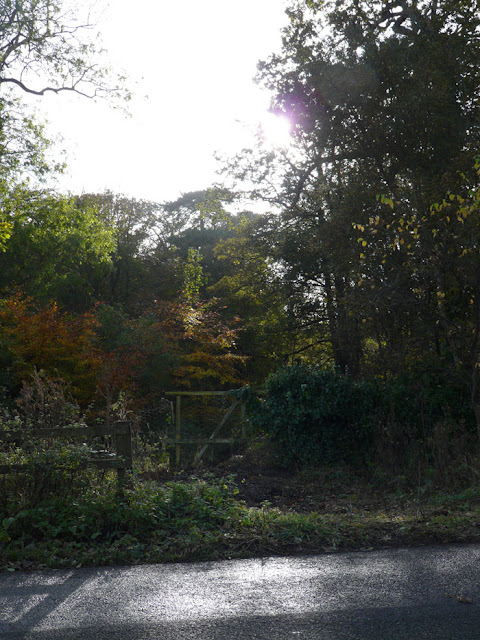 A lovely mild calm and quiet day today. A real pleasure to be out and about. The last rays of hazy sunshine lighting up golden leaves and red berries.

At home, while waiting for JWR to arrive first thing, a few things attracted attention.While having a coffee and gazing through the kitchen window, a 'buzzard' glided low over our house chased by a crow. I nearly didnt give it a second glance, but I lifted the bins and I was pleased to see not a buzzard at all, but a Short eared Owl! Not only new for the garden but new for the patch too...

Some viz migging from the drive had 1 Brambling, 1 Redpoll, 3 Siskin and 400+ Pinkfeet all south. Later, in the afternoon a walk to the Pond had 2 distant hirundines over the wood that I think were probably Swallows and 5 Crossbills circled about low overhead.

After John arrived we took a short trip up to Craster and walked the Heugh and around the Village. After some time, we found a nice Yellow browed Warbler that showed very well but only briefly before taking cover, a House Martin and a flock of 12 Crossbills flew S, a female Blackcap was in the allotments and a Purple Sandpiper was with Turnstones in the harbour. The sea was quiet with only a couple of Red throated Divers and Guillemots seen. A few birds were in a hedge next to a game crop including 15+ Tree Sparrows, 12+ Yellowhammers and a couple of Reed Bunting.
Posted by Stewart at 9:04 pm 1 comment: 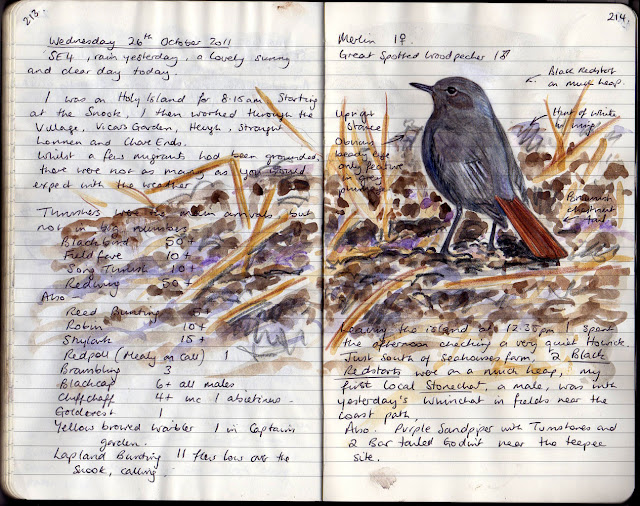 A flexi day off.  I headed off to Holy Island to arrive there shortly after first light. There were not as many migrants as may be expected considering the weather on Tuesday but there was enough to keep the interest up.

Back home at 1pm, I had a walk from home down to the Howick Burnmouth and back via the coast path. Two female / fw type Black Redstarts ona manure heap near the farm was a nice record and a male Stonechat with yesterday's Whinchat were the highlights. The Stonechat was my first on patch this year. It shows how the winter has affected this bird, when a couple of years ago there may have been 3 or 4 pairs in the area.

To save me writing please click on the notebook to see the birds seen.... 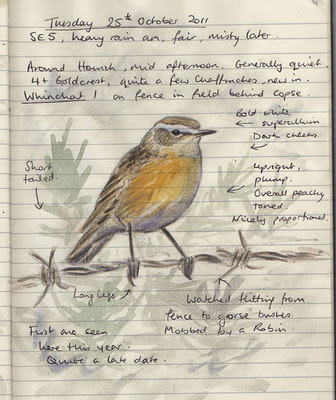 Finished work early and headed home to check the coastal path and village to see if any migrants had dropped in. A strong SE wind and torrential rain through the night had built up expectations..
All was quiet really with not even the expected thrush-fest. A fllock of Chaffinches in the back field soon moved on, probably new in and a group of 11 Mistle Thrushes tried to look foreign, but generally a few Goldcrests were the only sign of immigration. That is until I was almost home, when a nice, late, Whinchat popped up on the fence behind our house.
Flexi day tommorrow so maybe I'll fare a little better....
Posted by Stewart at 10:06 pm No comments:

A double dip day saved in the closing minutes...

I collected JWR at 7am and we headed off to Teesside to see if we could find the Pallid Harrier and Semi palmated Sandpiper that were still present yesterday. I had a chance to go for the harrier with Alan and Andy on Friday but work commitments put the block on it.

Anyway, to cut a long story short, we never did see the harrier. Making matters worse for John ( he hasn't seen Semi P either) we didnt see the sandpiper but it was relocated minutes after we left! Oh well you cant win them all.

Of interest during the morning were 1 Merlin over the car at Greatham Creek, 1 Peregrine at Saltholme, 3 Little Egrets, 8 Black tailed Godwits, 100+ Golden Plover  3 Pintail and, my highlight, 130+ Shovelers feeding together in one group.

A wander around the RSPB reserve at Saltholme was a first for us. Its very nice too with all the facilities at hand, nice paths, comfy spacious hides and a cafe. A bit too soft and sterile for us though, back to normal next week - cold, knackered, and damp...

Speaking of which, back home this afternoon a stroll around the coast path brought a pleasant surprise, a Snow Bunting. A drab fw female but very nice all the same as it skipped along the ash path ahead of us until it was stampeded by a family striding forward on their afternoon walk. I didnt see it again after that... 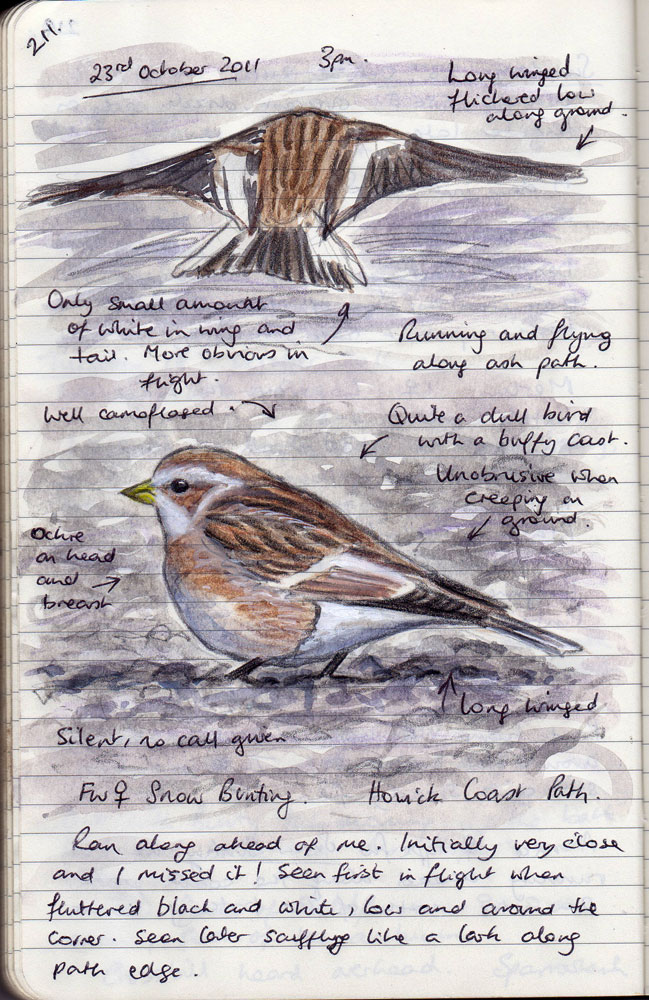 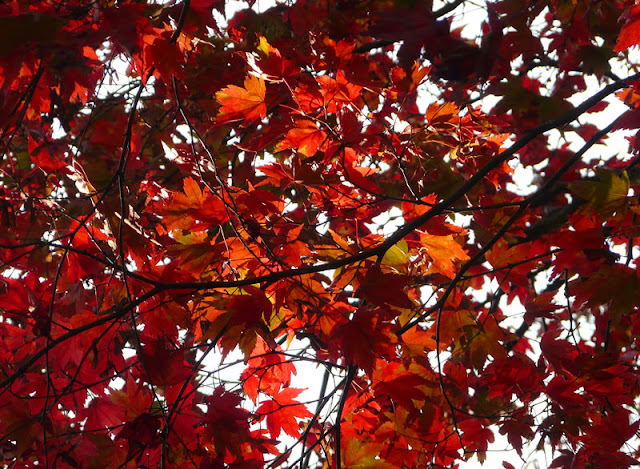 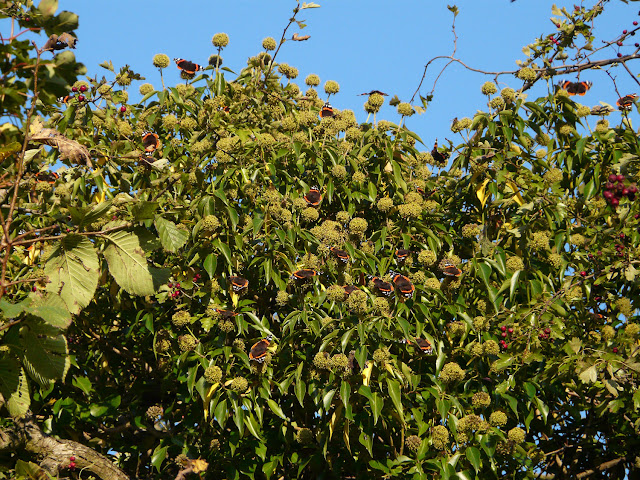 A walk around the Hall grounds this afternoon was very pleasant. Lots of butterflies on the wing - 2 Speckled Wood, 1 Small Tortoiseshell, 50+ Red Admirals, including 40+ on one ivy bush all together made a spectacular sight and a lone Painted Lady flew through our garden.

A Red Squirrel rang rings around us, literally, very close to begin with but high and distant before he sat for a photo.

On the way home a Raven cronked high over the Hall and flew east towards the coast, the surrounding Jackdaws were not happy with its appearance.

Later this afternoon news of a Great Grey Shrike 2 miles along the coast at Dunstan almsot had me jumping into the car, but it will wait until the morning...maybe?
Posted by Stewart at 7:52 pm 3 comments:

Some migrants at last...

Yesterday an early morning dog walk had a few migrants arriving from the coast. 21 Redwings flushed from Village Wood while 6 Bramblings, my first of the autumn, flew west. Another single Brambling was in the copse next to our garden.

Late on last night a Whimbrel was calling as it flew north along the coast path, a late bird here.

Today there are quite a few Blackbirds and smaller numbers of Redwings dotted about the village. A lone Redpoll that was big enough to be a Mealy dropped into the Rowan on our drive before carrying on west.

I might get a better look tomorrow. I might not have missed out on a chance of Yellow browed quite yet...
Posted by Stewart at 11:00 pm No comments: 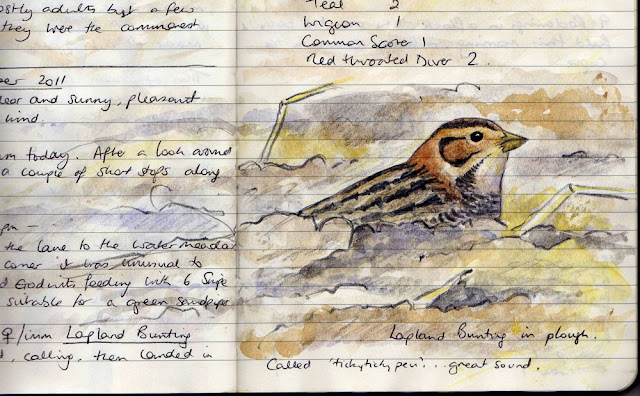 This week we have been on holiday in Norfolk, staying at Sea Palling. We tried further east for a change, but in future we will stick with the north coast. Its much nicer.


The weather, as you well know, was unbelievable. Temperatures in the first half of the week were consistently between 26 - 29 degrees, peaking at 30 on our way down last Saturday. Unfortunately, the settled weather meant that few birds were to be had, but one or two bits of interest were noted.

Marsh Harriers seen in a few places including 3 together at Cley.
Cetti's Warblers heard only on the Broads and at Cley.
Mediterranean Gulls in bulk at Great Yarmouth with 25+ together on the beach.
Common Crane, a flock of 8 birds seen from near our cottage flying off to roost but distant.
A few passage waders, including Spotted Redshanks, Greenshank and Little Stint.
Lapland Bunting 2 seen well on the ground at Kelling Quag were nice.

Adder 1 golden yellow female at Waxham dunes.
Moths - Large Wainscot, Beaded Chestnut and Herald at the lighted windows of our cottage.
Chinese Water Deer, 1 nearly knocked me over while I watched the cranes go to roost, disturbed by a farm vehicle.
Hornet, quite a few at Hickling along lanes near some woodland.

We visited the various coastal towns and villages around about. All were nice and quaint with that 'seaside' feel to them - Blakeney, Cley, Kelling, Sheringham, Cromer, Sea Palling and Waxham but nothing could compare with Great Yarmouth....I couldn't stop laughing the whole time we were there! I should have taken a tracksuit....

After the 'fish out of water' experience of us at Great Yarmouth it was a pleasure to get back to the cool and quiet of Northumberland...
Posted by Stewart at 4:05 pm 7 comments: