On Thursday while on holiday in Suffolk, a neighbour emailed me to say that Robert the head gardener at Howick Hall had seen a 'white heron' on the pond. There is a small heronry here so an albino is a feasible guess, but Julie, my neighbour, had been to check and she thought it was a Great Egret.

Bugger, a big patch tick considering the tiny amount of fresh water available here,but  I was sure it would soon depart as there are a good few visitors to such a small pond. It was bound to be disturbed.

So as soon as we got home on Friday, I, er, had to walk the dog and headed straight down to the pond. Sure enough, there it was, an smashing adult Great White Egret complete with aigrettes down its back, roosting with herons on an overhead branch. It did a couple of flights around the pool but stayed up in the trees as I left.

A cracking bird for the list, but surprisingly, it is Howick Pond's 6th heron species with Little Bittern, Squacco Heron, Night Heron, Grey Heron and Little Egret all recorded on an area the size of a football pitch! ( Well, in the last 150 years anyway...)

Although a GWE has been knocking around the Druridge - Hauxley area recently this bird looks different. Its beak is more yellow ( see here ) rather than the black bill of that bird... 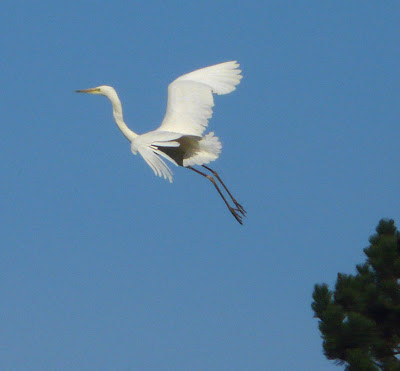 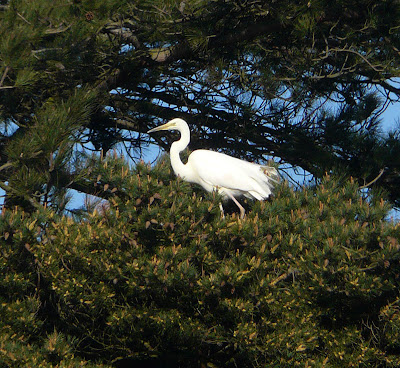 A week in Suffolk...

We spent the last week at Westleton, Suffolk, where, of course, I did some moth trapping on suitable nights. I was hoping to get a Lime Hawkmoth, but didn't have any luck, still, its something to target next time...

Over the week there were 10 new species for me, not particularly rare ones, but moths that occur a good way south of home. Not having any idea of what I could get there, all of them were great surprises...
Pick of the bunch must be Chocolate Tip, Great Prominent and V-pug, all fantastic looking things...

Any way, here they are, more on the trip to follow...

A shrine to a stringer...

Its a boring Wednesday afternoon at 4.21pm when my phone vibrates to life on my desk at work. After a cold, slow spring for birds and moths on my patch, a glance down to see who is calling, and it suddenly looks like things were about to change.

Gary Woodburn has been a birding friend of mine since he moved up here getting on for ten years ago (?). He used ring birds at Druridge Pools when that was my patch, but he always talked about his favourite spot - Low Newton, and had a hankering that better coverage of this quite remote Northumberland headland would produce the goods.

Since he moved up that way, the village has been nailed on to the birding map, that's for sure. Gary's patch watching has certain echoes of that other adopted Northumbrian, that raider from the north,  who turned the run down fishing village of Newbiggin into a birding mecca, Jimmy Steele.

It was with this knowledge that when I saw it was Gaz calling, it is often about a bird, and at this time on a Wednesday, it must be interesting. Previous calls from Gary have been for Greenish Warblers (the 's' isn't a typo),  Pallas's Warbler, Long eared Owl in the hand, Short toed Lark, Lesser Grey Shrike and Stilt Sandpiper ( though it can be to call in for a cuppa too... ) but I would not have guessed what this message would bring.

When I answered, a very calm voice asked if I was at work, when I confirmed this, he said, 'you might want to get up here...there's a  COLLARED FLYCATCHER'.

Now, my office is 30 miles from Newton, on country roads too, so without time to waste I just clocked off and left. Thank God for flexi time.

At the time, Gary was unsure that the bird would remain on public view as it was right on the edge of his ringing site on private land, so he hadn't gone public. I was sworn to secrecy until he assessed the situation, but by the time I got there an hour later, the bird was going to be viewable for the crowds and the informations services had been called.

It couldn't have picked a better feeding circuit, along an open fence line backed by gorse opposite the Tin Church where people could park cars and not disturb its routine. Excellent.

Collared Flycatcher is a new addition to the Northumberland List ( as was Gary's Stilt Sandpiper last year). In May 2005, Graeme Bowman made a request of the members of the Northumberland and Tyneside Bird Club to predict potential new additions to the county avifauna. Four people predicted Collared Fly - Eddie Slack, Les Robson, Maurice Hepple and yours truly! Easy to predict, harder to actually find...

So, in light of Gary's work in adding two new species in consecutive years to the county list, is it not time we had a statue erected on Newton Point....it could be named Stringers Shrine ;) 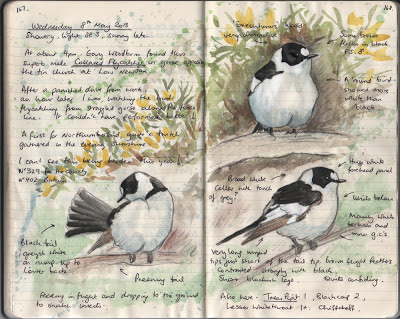 What will be the next addition to the county list I wonder?

Surely a twitchable Pallid Harrier isn't too much to ask...
Posted by Stewart at 6:17 pm 2 comments:

A pic from last week of this nice garden combo...

Another few moths last night, but this nagging breeze is becoming a bore now...

Well the computer has returned with a new case and seems to be working ok, though my emails are still cocked up so I'm getting a man in...

Even though this is the best catch so far this year, it shows how bad things really are. I should have had a few catches over the ton by now...Still I was please with the little Caloptilia...I'll ad a pic tomorrow.