At a loose end this morning, mainly because the cold weather isn't really helping the arrival of spring migrants, we headed up to Corby Crag and Edlingham for a wander.

Winter was even more evident up here...


...with snow lying thick on the forest tracks. Even so, the air was filled with the songs of Mistle Thrush, Chaffinch and Coal Tit, but we didnt fancy heading out at Easter through the snow. An about turn brought a nice pair of Crossbills perched on top of pines near the car on our return.

We moved off further down hill onto the old railway line that runs over the Edlingham viaduct that is seen in the 'Hobbit' film posters. The route brought us back via Overthwarts farm to Lemmington. There was no lying snow here, but it was icy cold. 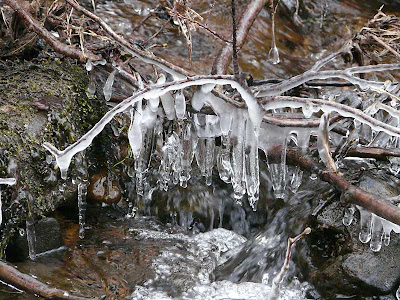 Along the line track, a Woodcock flushed from the damp woods, Jays were being typically raucous and a Siskin or two flew over.

In the damp meadows at least 4 male Lapwings were displaying. 4+ Yellowhammers were in song and 3+ Nuthatch were in verge side trees.

A fallen tree over the burn had a couple of fungi to photograph for identification at home.


Back near the car, newly arrived Meadow Pipits must have found the snow a shock on the moor, pushing a flock of 30 or so into a rough field, lower down, next to the road.

The biggest surprise, however, had to wait until I got home. Our friends who live nearby in Howick had been alerted by the panicking calls of Buzzards overhead and looked to see a huge raptor gliding over, high, towards the quarry. The Buzzards began to mob the 'eagle' while it circled a couple of times before heading off west and out of sight. That was about 11.20am when I was west of Alnwick. They have seen White tailed Eagle before, on the western isles, and believed this is what the bird was.

They are not birders but are reliable and their fuller description of its behaviour gives me no reason to doubt their sighting. What a gripper for the patch! I've spent the last few hours with one eye skywards but without luck...

Been out and about in the sunny weather today. Patch was quiet, but at least the wind has dropped. A short seawatch between snow showers had nothing really, well, 1 Red throated Diver S, 2 Razorbills N and a couple of Grey Seals bottling offshore. 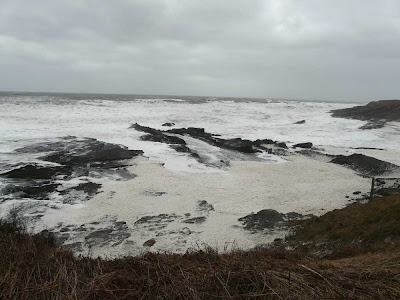 This last few days has shown little in the way of spring signs. Sure there are a few lambs in the fields roundabout, and hawthorn, honeysuckle and dog rose are budding, but otherwise zilch.

Without a doubt this is still winter, but I wonder for how long? This week has had snow with temps to -3 and 50 mph easterly winds cold enough to have a Toon lass reaching for her coat on a Friday night. We have had week four in the Garden Moth Scheme Survey and  my totals amount to 1 Hebrew Character. Two of the four sessions were so bad, weather wise, I didnt even bother to put the trap out. Last year over the first four sessions I had 150 moths.

As for birds, well, what is there to say. I am watching the Patchwatch updates on Twitter and see birders in the south and west complaining about having 'only' 20 Chiffchaffs and a Wheatear! What!
In January I did well with 91 patch species, but that took a drastic downturn with only 1 in February (Yellowhammer) and 1 in March ( Lesser black backed Gull) and unless there is a radical turn around on the weather forecast cant see there being any more new additions this month.

Still, I'll be out tomorrow looking to see if a battered Wheatear or Black Redstart as been catapulted onto the coast. You never know. Even a Collared Dove would do....

No spring migrants, no moths or butterflies, no flowers so time for some lateral thinking.

If its an id challenge you need,  there is always something in the wide world of natural history to keep us probing. You just have to keep an eye open for the unusual.

I have just read Peter Marren's book, Mushrooms, and cant wait to get stuck in. While looking for fungi, various lichens etc also catch the eye...

A wander around some upland woods this morning after the rather slow WeBs count at Branton found a variety of life to look up later on.


Now, these are very basic identifications so if you are an expert in these fields I would appreciate a comment to keep me right. The Dogs Vomit (sorry) is  past its best, but I am just about sure thats what it is...unless it actually is...

A bit of archaeology too... 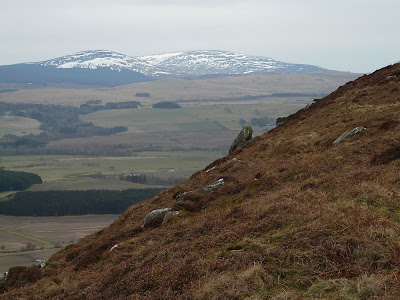 On Sunday, John and myself took a trip to the most ancient of Northumberland's landscapes, to visit a site of cup and ring marked stones. There are countless opinions as to the meaning of the carvings and symbols and we will never know for sure why they were produced. 3,000 years ago, primitive man must have had a plan for them. What I find amazing is that similar carvings are found in other countries too, in a time of no communication I would have thought even a few miles away things would have evolved differently. 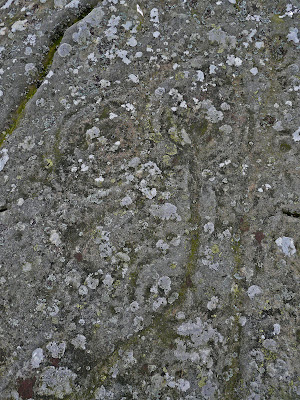 Northumberland contains the largest number of recorded cup and ring marked sites in Britain. These ancient markings are found on exposed rock faces in the northern hills and usually involve cup shaped depressions surrounded by concentric circles that are often joined by grooves.

Up here in this quiet, now bleak, landscape you wonder how people lived then and how people will live in 3,000 years time.... 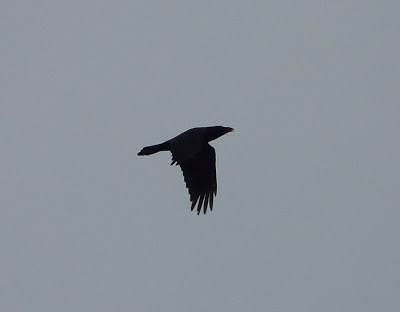 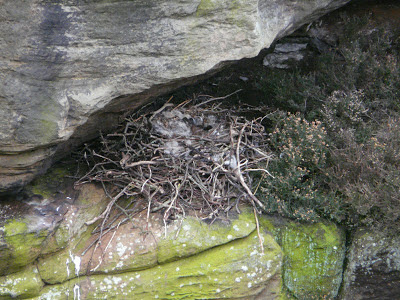 Our (public) path took us right past a newly refurbished Raven's nest where the adult let us know we werent welcome with variety of cronks, chuckles and capercaillie like 'pops'. We left them at peace in obvious view so they wouldnt be afraid we were lurking nearby. 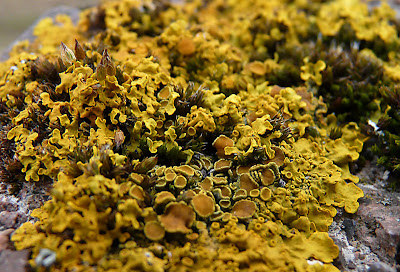 Some rocks were covered in lichens including the Golden Shield Lichen Xanthoria parietina and the one below that I am struggling to i.d ( any help appreciated). [Dog Lichen Peltigera canina. Thanks anon.] 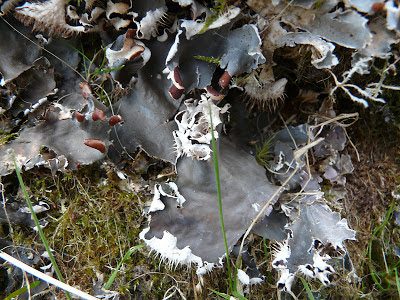 Near home, a flock of 80+ Bramblings was a nice find at the entrance to Howick Quarry where they fed in a game crop. The group also had single numbers of Tree Sparrow, Yellowhammer, Goldfinch and Chaffinch. 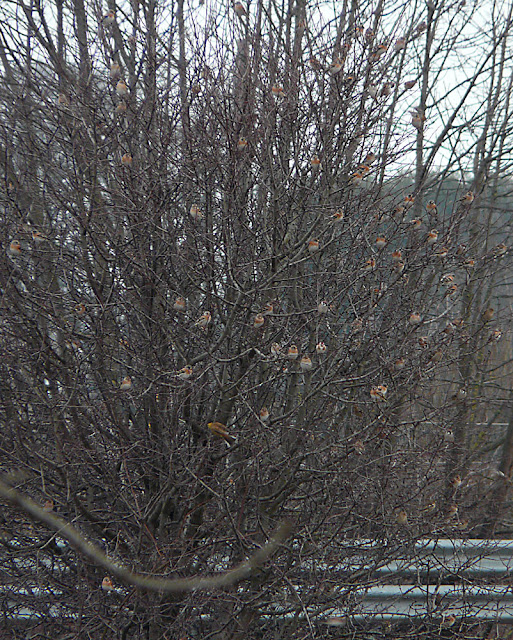