Les has commented on my Spicebush Swallowtail shot below so its encouraged me to put out the other butterflies I managed to get shots of . All of these are from Michigan...

It would have been nice to find an easy one!
Posted by Stewart at 9:26 pm 2 comments:

Well it will be sad to sign off. While I have been bombarding you with photos of our nearctic adventure, I have really enjoyed reliving the experience. It was really fantastic you know. I've never been to the states before, so you can imagine how good it would be.

On the 18th we had a long drive back south as far as the Allegan Dam on the Kalamazoo river. Our target here was quite easy to locate - Cerulean Warbler. We soon found a singing male and female that showed well eventually but very briefly and I was too slow for a decent pic, but what a bird.

Also here were a pair of Yellow throated Vireo nest building and 350+ Cliff Swallows nests on the dam itself.

Before calling it a day we checked in to our hotel then came back out to have a look at a parkland and wooded area called Al Sabo Park. We found 1 male House Finch, 1 male Pine Warbler, 2 White breasted Nuthatch amongst the more usual garden species.

Our final day was the 19th. We managed to get in a couple of hours at a place called the Kleinstuck Preserve. A mature wood surrounding a marshy area. Even at the final whistle we still found several new species -  Barred Owl seen well high up, 2 Wood Thrush with their haunting song and a male Pileated Woodpecker seen several times, my biggest woodpecker to date, even bigger than Black. A good selection of other species here included Great Horned Owl, Swainsons Thrush, Rose breasted Grosbeak, Green Heron, Magnolia, Chestnut sided, Tenesee warblers, Downy, Hairy and Red bellied Woodpeckers plus a few mammals - Fox, abundant Chipminks, Fox Squirrel, Red Squirrel and Grey Squirrel and 5 White tailed Deer.


An Eastern Kingbird was waiting for us back at the hotel as we packed ready for home, This concludes a superb trip. We saw 31 Warblers ( I saw 29 of them), 13 Sparrows, 8 Woodpeckers, 3 Owls and 2 Grouse to name a few with over 130 lifers for me.

So its back to blighty and the real world...

Instead of pounding the dark cold forests, we headed for a proper wildlife refuge - Seney.

This park was a huge complex of pine forest and marsh with large open lakes. There were two drive around routes so birds can be viewed from the car of from various stops. 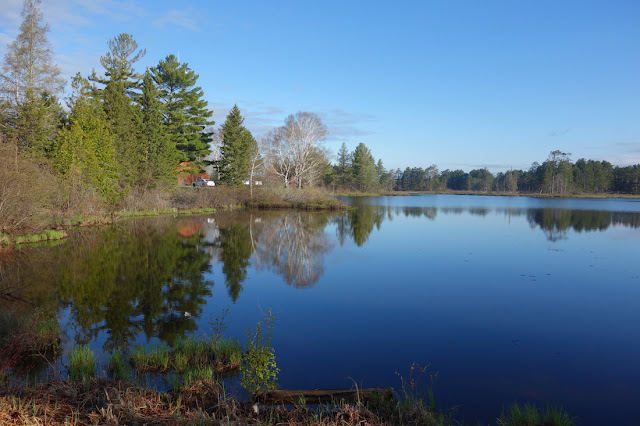 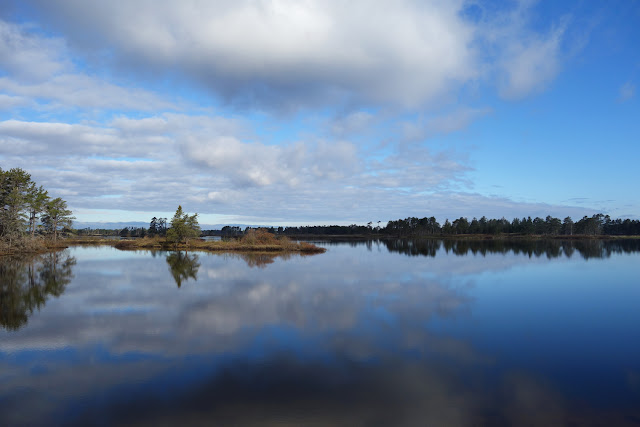 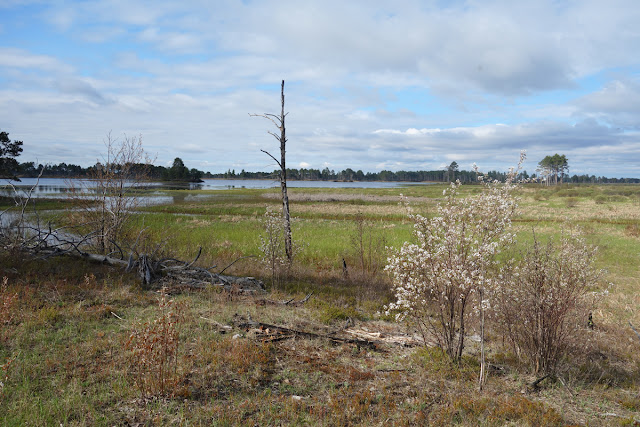 The most easily seen birds were the 34+ Trumpeter Swans scattered around the place.  It was while watching these birds we saw our first Common Loons ( Great Northern Divers to us) on breeeding territories. We also had a close flyby from a male Northern Harrier.

As with most wetland areas, there were a lot of birds and the list began to rise -


2 Beavers were seen very well swimming across open water. They surprised me by their very large size.

A nearby back road gave us an easy Black backed Woodpecker on a tip off.  This was a tick for the whole team so the more experience nearctic travellers were well pleased.

From here we had a drive back up to Whitefish Point, where a lone male Piping Plover was displaying and showing quite well albeit at a distance. Sparrows at the feeders had increased with 100+ White crowned, 3+ White throated, 2 Lincolns and 6+ Chipping. Lots of raptors were migrating over head in large 'kettles'. They were mainly Sharp shinned Hawks, Red tailed Hawks and Bald Eagles while lower down 100s of Blue Jays continued their journey.

2 Killdeers showed very well at the road end turning circle before we began the drive south to Grayling again.

On the 17th we had a day out to Tawas Point to look for migrants. This was a 2 hours drive from our digs at Grayling but well worth it. I think I enjoyed the 'spurn point feel' about it better than Magee. 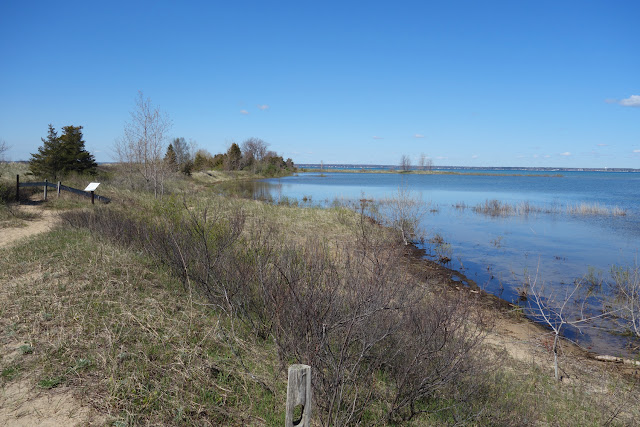 A short detour to another wetland called Tuttle Marsh resulted in me dipping golden winged warbler, but I did see Belted Kingfisher, Black Tern, Bald Eagle, male Blue winged Teal, Osprey on its nest, 2 male American Redstart and a Veery.

Just along the road we snatched a glimpse of a singing male Bobolink just before it flew off distantly.

It was now time to move south ourselves as our trip was coming to an end...
Posted by Stewart at 4:31 pm 2 comments:

On leaving our hotel in Grayling, MI at 07.30 we had a bit of a shock as the temperature had gone down to 3 degrees and felt like March. This effect was even more exacerbated when almost our first bird of the day was a male Lapland Bunting that flushed from a rough ground area beside the main road.

While waiting for the chaps to gather, John and myself loitered around the hotel looking at the woods at the back. Here we heard an owl call quite loudly that, when Richard played the calls back to us, was certainly a Northern Saw-whet Owl. We tried to look for it, but with so much pine forest it was futile so we headed on to our journey into the Upper Peninsular of Michigan, locally know as the U.P ( Yew-pee).


Birding was quite good en-route with 2 American Bitterns flushed from a roadside ditch and flying next to the car for a short way, male and female Northern Harriers, Red breasted Merganser and Goosander ( Common Merganser here). A stop near a large wooded lake had 2 Ring necked Ducks, Northern Harrier and Belted Kingfisher while the woods were quiet with only Hermit Thrush ( the first of many) and Blue headed Vireo noted.

What really struck me was how big and empty the place is. Huge good wide roads straight as a die for miles with little traffic on them.

We had a stop at Taquemanon Falls River Mouth and happened upon a nice Northern Mockingbird here at the northern end of their range. Some maps show them as only going up as far as Ohio, but they seems to be expanding range. Also here Richard found a Vesper Sparrow that we all missed, Swamp Sparrow and a Beaver lodge.

We arrived at Whitefish Point at noon in a bitterly cold northerly wind but at least it was bright and sunny. Most birds were gathered at feeders behind the obs building - 30+ White crowned Sparrows, 1 Lincoln's Sparrow, 3+ White throated Sparrow, 1 Chipping Sparrow, 20+ Blue Jay, 4+ Raven over head, 1 Osprey over, 3 Sharp shinned Hawks in to the feeders, 4+ Black capped Chickadee and 1 Chipmunk.

We checked a few places around the Paradise / Newberry area but the wintry weather had us beat. Birds remained elusive..

Overnight was spent in Newberry. The temp dropped to -2 and when I got up there was a light grass frost. Later it was fine with odd snow flurries remaining cold.

First stop was an old airport called Raco Airfield. This was an excellent stop for birding until we came to leave and found we had been locked in! I removed a fence post, temporarily, allowing Richard to drive us out, then replaced it. No one was any the wiser.

The entrance to the airfield was quite good with several Vesper Sparrows and 2 Evening Grosbeaks around the gate.


After escaping our temporary confinement we stopped at Eckerman where we found the famous Bear Butt Bar was now closed. Luckily a house next door also had feeders including a huge dustbin winched up a flagpole to keep critters off. On this were 10+ Purple Finches, 6+ Evening Grosbeak, 10+ Blue Jay and a Northern Flicker.

Continuing on a theme, the rest of the day was spent driving remote roads and stopping occasionally to see what turned up. We did alright with some perseverance.
6+ Ruffed Grouse at various spots, 1 Red breasted Nuthatch, 1 Yellow bellied Sapsucker,  2 Pine Warbler, 1 Blue headed Vireo and a Palm Warbler were all seen. A small warbler flock held Cape May, Black throated Green and Yellow rumped but generally passerines were very hard to find.

In the McMillan Forest we came across a nice male Golden crowned Kinglet that gave some reasonable views.

We ended the day exhausted  and decided we needed to regroup and try something different tomorrow....