Yesterday evening a Swift flew S with some Swallows and House Martins over our house, while a Yellow Wagtail moved N. Isn't migration strange...

Tonight a sharp call, in the dark, outside was either a Spotted Redshank - 'Chewit' or a Little Ringed Plover - 'Cheew'. Bugger. Pity I didnt get a second chance at it....
Posted by Stewart at 10:25 pm 2 comments:

This evening a walk down to the Howick Burn Mouth was quite pleasant. A large gull flock held a single juvenile Mediterranean Gull, while 5 Whimbrel flew south overhead. Back up to the farm, and my first Merlin of autumn briefly chased a swallow before moving on south.

A Porpoise was very close in at Cullernose this morning. I managed to get some Yorkshire tourists on to it as they walked by enquiring what I was watching. They were pleased, not having seen one before..

Most unusual sighting of the year came while I was working in deepest Ashington last night. Ashington is a largish town with quite dense housing at its east end. It is one of the most socially deprived areas in the north east . So imaging my surprise at 8pm when I glanced up from a housing estate car park to see a Spoonbill being chased by a Little Egret both flying NE overhead! Absolutely bizarre...
Posted by Stewart at 12:59 pm 7 comments:

Not much from the Notebook action this week I'm afraid, though I have a few photos to post on here tomorrow night. Don't get too excited though...

This morning while doing the moths, first thing, on the drive, some early visible migration was taking place overhead. The metallic 'pseez' of a Tree Pipit overhead was the first thing into the book. It was quite low and was seen well in the binoculars. Fifteen minutes later a second bird came through, higher this time, but both going NE?

Next to change my focus was the wooden 'chip clip' of Crossbills somewhere high in the blue. Unfortunately I couldnt pick them out so no numbers here. There was more than one and they were going S is all I can add.

A lone Whimbrel, trilling, again moving N, was quite an easy one to pick up, followed by a Yellow Wagtail, then Grey Wagtail ended the early am movements.

A steady southerly passage of hirundines in small groups of 8 - 10 birds took place before 8am.

And all of this from the garden, cant be bad...I'll update some more tomorrow ...
Posted by Stewart at 11:35 pm No comments:

Have you noticed how many hoverflies are in your garden at the minute? Go and have a look. Tonight I spent half an hour looking at the thousands in my garden. There were 4 or more on every single flower out there. Although the light wasn't too good I identified four species from photos taken - 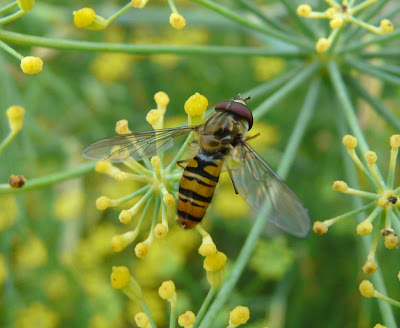 Commonest by many hundreds to one was this above -  Marmalade Hoverfly. 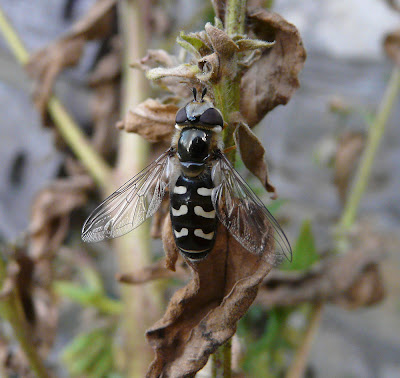 Above - This one is a bigger one, Pied Hoverfly. 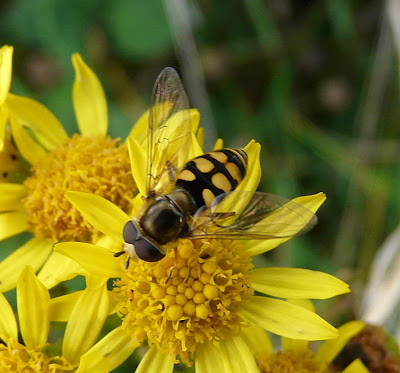 Then its more tricky. Above is Eupeodes latifasciatus. 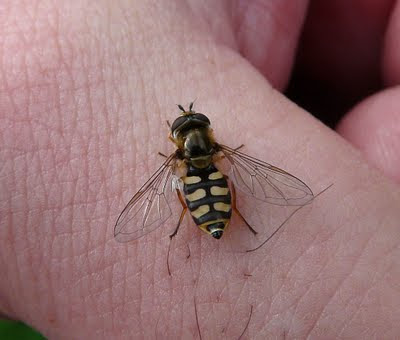 And its mate, Eupeodes luniger.
This is the first time I've really looked closely at these and I'm sure I'll be taking more notice in future. Click on them for a bigger image.
Posted by Stewart at 8:55 pm 2 comments:

Early this morning before work the sun shone a mellow light, glinting off the rain soaked grass. A Golden Plover, my first of the autumn, flew north, low, over the garden calling its clear, hoarse note.

A Comma was on the buddleia on our drive next to the forsythia that held the Woodpigeons nest containing a single newly hatched chick and an egg.

At 7pm it all kicked off in the garden with a set of proper juvenile delinquents. An adult female Sparrowhawk was being battered by two squealing large young ones, almost flying into the window. They landed on the fence in a flapping screaming racket so I attempted a photo - 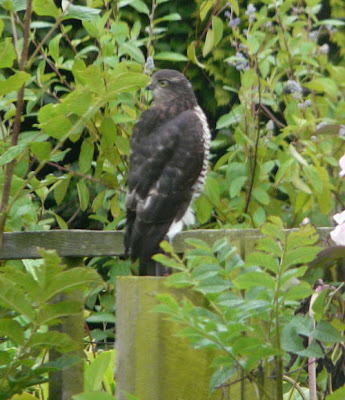 By the time I scratted around for the camera, mother and sibling were off leaving matey quite bemused at their absence. About half an hour later the noise started again as the trio returned causing all manner of consternation in the Starling roost in the conifers...

This is the first time I've seen this type of raptor behaviour in the garden....

It started to rain at about 11.30am on Saturday and it hasn't stopped yet. I've seen nothing whatsoever to post on here other than a Whitethroat along our drive and a flyover Sparrowhawk. Hopefully we might get some of this over the next week or two attached to an easterly wind. I'm unearthing ants nests on the lawn for a Wryneck...

I believe it is due to fair up tomorrow mid morning. Great eh.
Posted by Stewart at 9:56 pm No comments: