For the birder anyway.

August, tomorrow, heralds the start of the autumn migration season for me.

On the local patch young warblers begin to appear in unusual spots such as gardens etc, an eye on the sky always has the chance of some viz migging, with things like Swifts and Sand Martins already on their way to more tropical climes or a drifting raptor like an Osprey maybe. Early in the morning a practiced ear can add a fly by Tree Pipit or Greenshank to the list. Birds not known as migrants can also be added to new areas as juveniles carry out a post breeding dispersal. Nuthatch is a good example of this, just check tit flocks early in the mornings.

Down on the coast path, an adult Arctic Skua was in the cove while 20 ish Common Scoter flew N...

Tension builds as we hope for an easterly towards mid month...
Posted by Stewart at 7:19 pm 1 comment:

Before I start, Birdguides / Rare Bird Alert - Any bird reports on here are usually seen at Howick unless otherwise stated. Yesterdays report of Roseate Tern and Stormies were here, not Boulmer...

If you live in Northumberland and have not seen one of these I suggest you get to the coast pronto before they move offshore or north or where ever they will vanish to, soon. This is a spectacle that will not be repeated in the near future I bet...You may need a telescope though, I tried to see if I could locate one in the binoculars but even at relatively close range they are tiny and take some picking out.

Tonight I seawatched off the coast path (er, Howick) for an hour from 6.35pm. In the first 15 minutes I had 15 Stormies, and ended with a minimum count of 32 birds before 7.30pm. There were more sightings, but I tried to eliminate duplicates of feeding birds.

After half an hour I decided to concentrate further out than Stormie range to see if I could get a July Sooty but it wasnt to be. I did get 12 Manx Shearwaters, 40 Arctic Terns, 3 Puffins, 1 Bonxie and 1 Arctic Skua though so I'm happy with that.
Posted by Stewart at 9:26 pm 2 comments:

A gallon of Petrels... 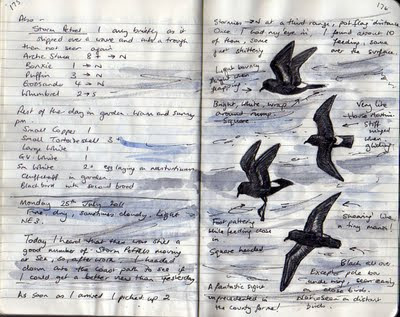 After yesterdays good showing of Storm Petrels off various north east headlands I could only manage half an hour this evening after work, so me and the terriator trotted down to the front and waited.

Not for long mind you as no sooner had my eye hit the scope two tiny House Martins Stormies fluttered into view. The true sea swallows these, forget the analogy about terns. As they soared and glided, and flicked their wings the sea looked just like a big pond with hirundines over it.

Each time I moved the scope it was only a minute or two before I picked up another, with some very close in, feeding with feet pattering the waves. In total I think I had 10 birds, but there may have been more disappearing over crest and into troughs. This was a sight I didnt think possible in Northumberland even after 25 plus years seawatching here I saw more Storm Petrels in this half hour than in many dozens of hours previously.

Also of note - 8 Manx Shearwaters and a Roseate Tern plus many auks, gannets, terns and kittiwakes. 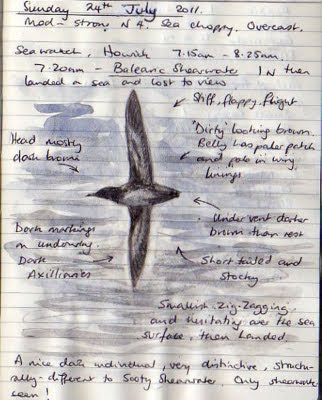 Nothing else for it, I'm off seawatching, my first session of the year. A short walk found me atop the cliff on a mouldy old deckchair pointing east. As I expected so early in the season, the scene was dominated with breeding species, Gannets, Kittiwakes and Terns. After only 5 minutes, a shearwater came into view from the south, and not a Manx. Balearic Shearwater! A patch tick, and my first shear' of the year too. A nice dark bird showing distinctive pale belly and wing linings. It was flapping along quite slowly, zig-zagging offshore then inshore again then landing not far off but the swell took it out of sight immediately, and it wasnt seen again.

Arctic Skuas were in reasonable numbers with 8+ seen, 1 Bonxie distantly North, then a tiny, black Storm Petrel slipped over the swell for a second then lost to view. A very brief snippet but enough to add it to the list.  Two patch ticks in a day, cant be bad.

Other 'padders' were 3 Puffins ( a year tick, what a disgrace), 1 Roseate Tern, 4 Goosanders N and 2 Whimbrel S.

The rest of the day was spent tidying part of the garden and putting some plants in. A few butterflies were seen, Small Copper, Small Tortoiseshell, Green veined White, Large White and Small White, the latter egg laying on the nasturtiums. A Chiffchaff fed in the overgrown corners and a Blackbirds sun bathed between feeding its second brood.


A few bits of note from yesterday -

The farmer cut the back field behind us for silage on Friday night. In the process he chopped up a Grey Partridge, leaving its brood calling from the side lines. I hope they can look after themselves, small creatures hiding in the long grass have little chance to escape a big mower doing 30 mph around the field. Squatting and hoping it will go away is just a recipe for disaster.

On Saturday morning a big Lesser black backed Gull and 5 Magpies were squabbling over the partridge remains while a Buzzard picked off other exposed small wildlife.

As we watched from the kitchen window and adult Mediterranean Gull flew low around the field then moved off south. A lot of insects must have been disturbed as the sky was full of hirundines etc with many Swallows, quite a few Sand Martins and a handful of House Martins and Swifts.

In the wood, Broad Leaved Helleborines are coming into flower and Giant Bellflower is in bloom along the lane.

I've removed my patch list from the side bar because it has just stopped working. I am unable to add to it. All that keeps coming up is that Javascript is void??? As I have no idea what the hell that means I've removed it all.
Posted by Stewart at 11:13 pm 5 comments:

Last nights coastal stroll produced a few bits and pieces. A big frenzy of terns was offshore, a tad too far for the bins, but a few came close in - 2 Roseates, 3+ Commons, 10+ Arctics and 10+ Sandwich. Below the terns were a good few Razorbills with young and at least 2 Goosander.

But, for me, the highlight wasn't the flickering winged sea swallows, not even the rare ones, no. On my way into the house a call over the back field grabbed my attention and, duly, a Ringed Plover was added to the garden list! It flew low over the field in display flight mode towards the coast. On this stretch they are a difficult bird to get because its very rocky with little sand for them. I assume this is an inland bird returning to the coast to winter...
Posted by Stewart at 8:41 pm No comments:

Last nights stroll to the coast path found the cove filled with terns. Well, 30+ anyway, a not bad count for this rocky stretch. Mostly Arctics, there were a few Commons and Sandwich too. Suddenly the Arctic Terns started making a 'pew' 'teu' call that I recognised as a mobbing tone, scanning around, there, almost over head, was a huge big old Bonxie, soaring like a Buzzard over the coast path. At one stage it went inland for a bit then back to the sea. Although it spooked the crap out of the terns it didnt seem too bothered and just loafed offshore. It was quite a pale mealy mottled adult, a nice early one for the year list...
Posted by Stewart at 8:19 pm No comments:

This morning on my way to work, I was driving south, approaching the speed camera at Hadston when I saw a party of 4 birds flying towards me just west of the road. They looked odd. Not young Black Headed Gulls? Nope, a group of Arctic Skuas flying north over fields and houses. It looked like two pale phase adults and two immatures. Agreed only half a mile from the sea, but for this species, a good way inland...It brightened the journey anyway...
Posted by Stewart at 10:41 pm 4 comments:

Mega alert the other day said Greater Yellowlegs, at some pool made of concrete. Now that woke me up. I missed the Solway bird a few years back so might have been keen to get this one. As the morning wore on it came on the pager again, now showing well. Showing well I say.

Then, after lunch a report came on saying Greenshank, showing well and gave the same on site parking instructions.

What is going on here? How the hell can someone, indeed some crowd, report GYL on at least 4 occasions before the realisation finally dawned on them that this was actually one of the commonest early freshwater passage waders of autumn.

Its amazing how many budding Kieth Vinnicombes are out there blubbing about scapular notches and emarginations, but a Greenshank SHOWING WELL might as well have come from Mars. 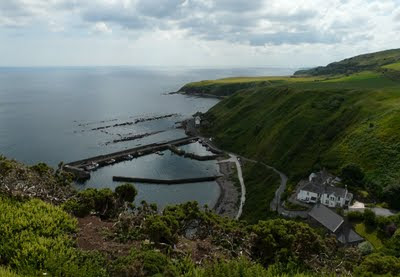 Today myself and John took a short jaunt north over the border into Scotland. From home this was only a 50 minute drive and it was well worth it..Above, Burnmouth harbour looking as scenic as ever. From here we could just see Holy Island and Bamburgh castles in the distance.. 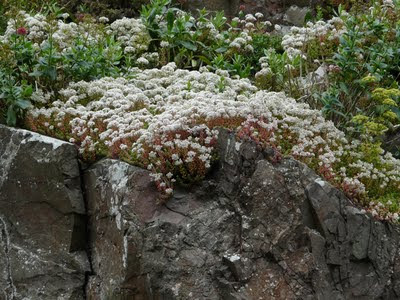 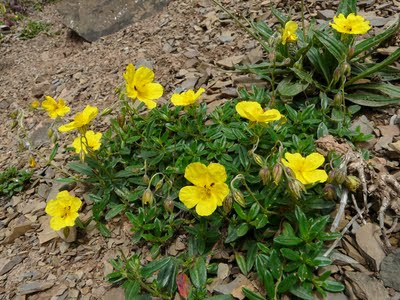 Above, Common Rock Rose. This is almost non existent in Northumberland, but here it is prolific. 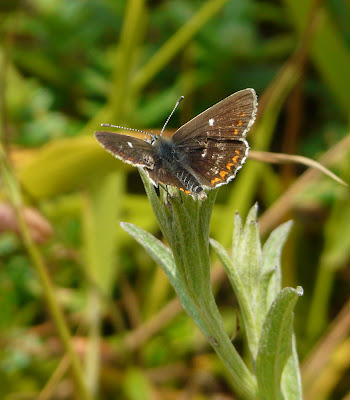 So it was with little surprise that we found our goal quite easily - Northern Brown Argus, above. Although worn, these tiny chaps have bottle spending their time harassing every other butterfly that dares fly into its territory. We had about 5 in a small area along with 20+ Grayling, below, 1 Common Blue, 10+ Meadow Brown, 5+ Ringlet, 1 Small Tortoiseshell and 1 Large White. 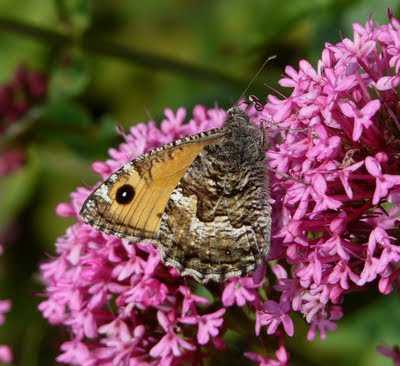 We also came across a very showy Hummingbird Hawkmoth, that began laying eggs on Lady's Bedstraw, bottom. This must be a scarce occurrence in Scotland... 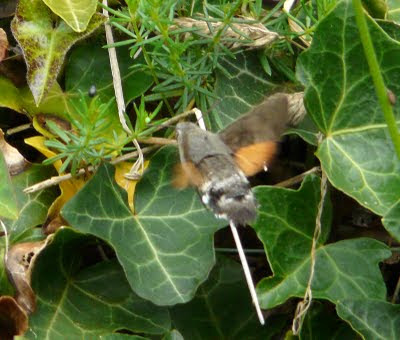 The only noteworthy birds were a single Raven over and a lone Crossbill in some pines in the village.
Posted by Stewart at 11:07 pm 2 comments:

Hello all this is an appeal, well to Northumbrians anyway.

A few of you have texted me or emailed with details of Hummingbird Hawkmoths in your gardens this week. Would you be able to send me the full info please -

Your name
Site where seen, if garden address please.
Six fig Grid Ref
Date
How many.

If you are kind enough to send this info I'll forward on to Tom the county recorder. Or alternatively you can send directly to him using the  Northumberland Moths website link on my moth blog, link left.

It would be good to get numbers of the little hummers on this, clearly, an influx year.

Thanks again.
Posted by Stewart at 8:12 pm No comments: 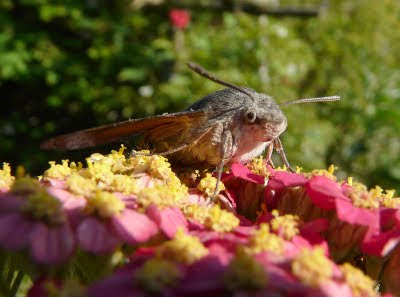 After hearing that Mike Hodgson had a Hummingbird Hawkmoth in his garden the other day, I decided to keep an eye open at home. No joy on the flowers, after all these migrants are quite scarce in the north east, I mean this isn't Dunge or Portland...

So, at 5.30pm when I was about to take Bunty for a wander I opened the door into our porch to be greeted with an almighty buzzing and beating around the tomato plants. Thinking that the mother of all bumble bees needed to be released, I was over the moon to see this little hyper active critter bashing up and down the glass, having just come in through an open sash!

After a photo session It flew off faster than a racing pigeon high into the sky.

I think the person was right who said 'Everything comes to he who waits...'
Posted by Stewart at 10:59 pm 7 comments: