This afternoon reached a mad 17 degrees. A summers day in February.
In the Village Wood, a sallow was covered in Honey Bees and a single Buff tailed Bumble Bee. A Red Admiral was my first butterfly of 2012. 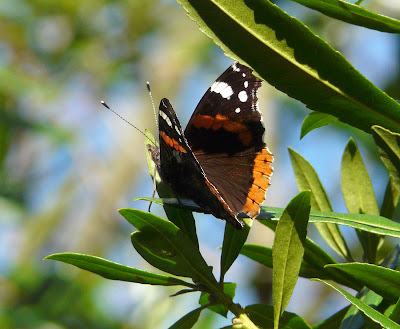 Into the Pond Field, the track was peppered with Toads, 70+ with more in the pond. 90% seemed to be squeaking males. 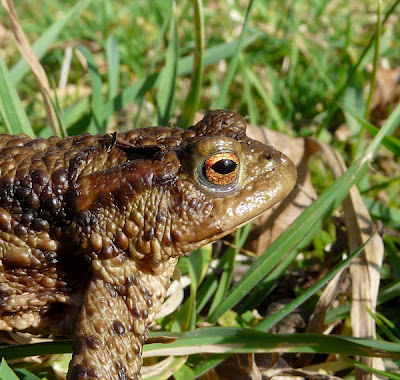 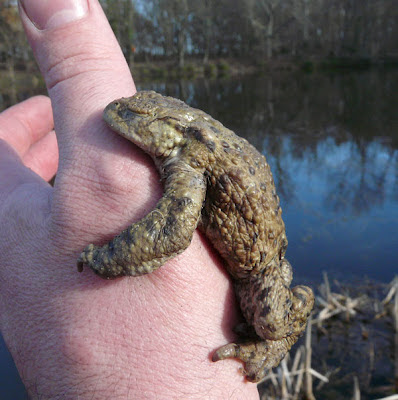 The one above tried to death grip me into submission but failed... 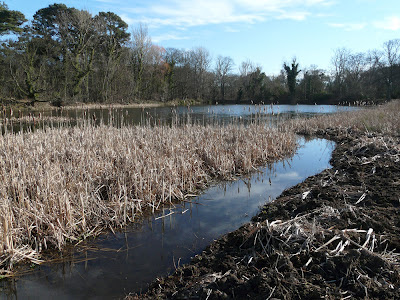 The newly cleared channel into the pond seemed to be the favourite spot for the amorous amphibians. On the way back, 4 Frogs were in a ditch, only the second time I have seen Frogs here in three years....
Posted by Stewart at 11:02 pm 4 comments:


Walked over the back field towards the heugh first thing.

I was pleased to see 4 Buzzards in the air together, just hanging in the wind, when suddenly, a Peregrine came in from the south and was having none of it. Determined to stop their fun, she dived at them a few times before boredom set in and she moved off north, leaving the sluggish Buzzards to get on with it.

No sooner had the Peregrine gone, 3 Kestrels came out of the wood nearby and began displaying and calling. It was nice to see 8 raptors sharing airspace in the space of a few minutes.

A pair of Grey Partridges and a pair of Reed Buntings were in the marshy field corner, and a Grey Wagtail was on the burn in the village....
Posted by Stewart at 10:26 am 2 comments: 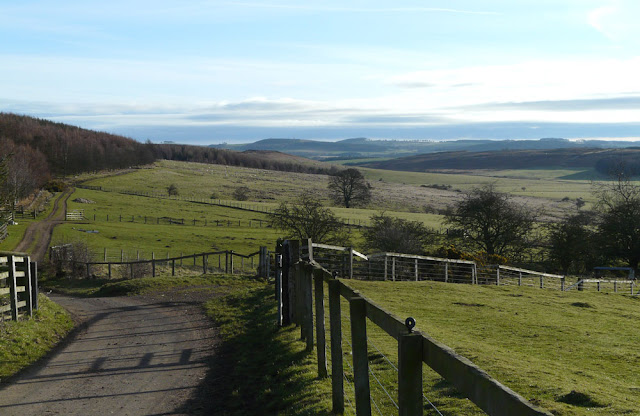 Yesterday we took a trip west to an upland area, other than that frequented by many other birders in the region, to look for Goshawks.
We arrived far too early as the birds don't get up and about usually until after 11am, but it was a lovely morning and the Skylarks were singing. Three Roe Deer, a doe and two year old youngsters, gave a great show, with the young leaping up and butting each other like lambs, in the morning sunshine.
Pairs of Crossbills flew here and there, calling, with odd ones in song, but difficult to hear above the Siskins and odd Redpolls. A pair of Buzzards lazily soared over head.
The blanket bog habitat here looks great for plants and I'l be back in the summer to check for Large Heath butterfly and dragonflies. It looks ideal. A new plant for me was this tiny Cranberry. The creeping plants were all over the sphagnum moss, but very few still had berries. I wonder why they are red? Tiny and on the deck, I cant see them being plundered by Fieldfares thats for sure.... 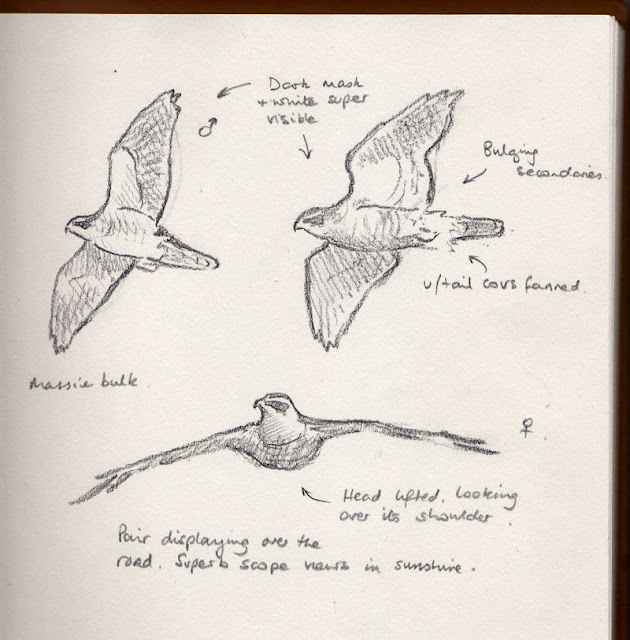 On the moor we heard a Gos callng briefly then moving silently into the wood. No luck here then.

So returning to the car, we drove behind the same wood just in case, when bang on cue, a male Goshawk 'butterflied' out and just over the tree tops then over the road.

After stopping the car roadside, it was a scrabble for optics. If I had gone for the camera I might have taken a reasonable shot, it was that close, but I decided to be greedy and grabbed the scope instead. I'm pleased I did, as the bird was banking over into the sunshine where a good amount of detail could be seen instead of the usual distant silhouettes.

The male's flight technique must have worked because a massive female came up to join him in circling for five minutes before she sank back to the forest and he drifted off west. The display scattered hundreds of crows, pigeons and Lapwings to the horizon.

A brilliant show.
Posted by Stewart at 5:28 pm 4 comments:

Its very mild tonight, 11 degrees. Shortly after dusk I rescued 4 Toads from the Howick lane end as the headed across to the pond field. Two didnt make it. A Pipistrelle was flying about the village, and Ive caught my first of several hundred Hebrew Characters in the garden... 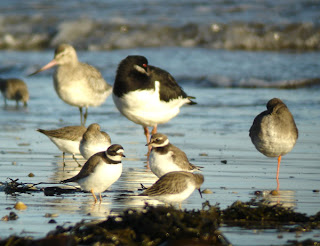 A cold morning, with a -1 degrees start at 8am. The day was crystal clear with bright sunshine.

John came to collect and we took a short jaunt up the coast as far as Beadnell.

At High Newton, a nice pair of Kestrels were sunning themselves outside a quite obvious nest hole in an old ash. This species has been much in evidence this last few weeks with hovering birds seen all over and today was no exception. I think I saw 7+ individuals this morning.

At  a quiet Newton Pool the rarest sight was Jimmy Steele and Colin Bradshaw in the hide briefly before heading off to have kippers for breakfast....10 Goldeneye and 10+ Teal were the only things of interest on the pond. The beach was slightly better with 3 Grey Plover, 14 Bar tailed Godwit and 3 Purple Sandpipers with commoner waders. My first Gannets of the year flew north offshore.

We then moved to the north end of Beadnell Bay and walked south as far as the Long Nanny burn mouth.
A nice flock of duck were sheltering in the lee of the harbour wall - 47+ Goldeneye, 3 Red breasted Mergansers and a good few Eiders. Another wader roost on the rocks gave us the finishing flurry with 11 Dunlin, 8 Purple Sandpipers, 3 Turnstone, 1 Ringed Plover, 24 Oystercatcher, 10 Curlew, 10 Bar tailed Godwit, 1 Redshank and 1 Grey Plover.

It looks like the weather will be turning very mild later this week, so if the wind drops there may be some moth trapping...
Posted by Stewart at 6:36 pm No comments:

A week ago I took this spider from our kitchen ceiling. It had been there since before Christmas with its small web in the corner. I thought it might need better 'habitat' and placed it in the shed.

Anyway, after a quick scan on the internet, it is, I think, a species called Zygiella x-notata or the Missing sector Orb Web Spider. 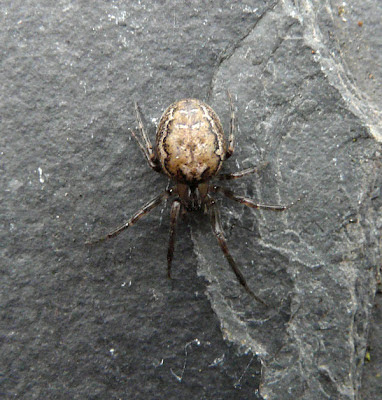 The gobful of a name intrigued me so another five minutes on't'internet gave away the secret of its unusual name. It is an orb web builder like the garden spiders we all know, but this species is one of a group that leaves a segment out of the 'orb web'. I have seen this before but thought the web had just been damaged.You live and learn.... 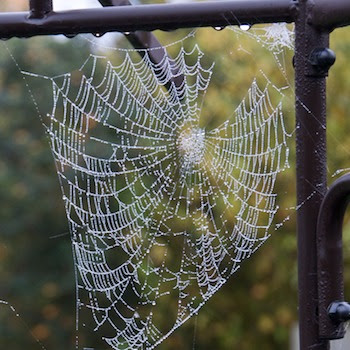 I forgot to mention this earlier. How common are Moles near you?

Up here in North Northumberland its unbelievable how abundant they are. Around Alnwick and everywhere else for that matter the landscape is pock marked with small mounds of excavated earth. Some of the best fields seen today had tens of thousands of hills in them. The land literally ploughed by the short sighted velveteen gentleman in black.

Some main road verges are demolished, and I cringe when I see the damage and imagine what people with manicured lawns must say.

In our garden we have one and about 10 of his hills. I dont hurt the Mole but I try and 'deter' him by sticking a garden fork or metal spike in the ground and hitting it with a trowel or something when I walk by to disturb his efforts...It usually works and moves him into the wood out of harms way.

Another week passes with scarcely a salute to Blogger...but, at least, as the evenings retreat things can only get better.
Today was quite pleasant out with JWR to do the WeBs at Branton Pits. Mostly the ponds were frozen but a good few wildfowl were keeping the margins liquid - 110 Wigeon, 31 Tufted Duck, 39 Teal 16 Goldeneye, 29 Coot, 22 Mallard and a few Mutes Swans. Two Dippers were singing and displaying along the river, a different pair and site to the ones recorded last time here.

As it was a dull still day, photos were a non starter.

After lunch back home, as we headed to Alnwick in the car, our favourite appeared on the roadside again - Ermine! In the same spot as last time, on this occasion it stood up in the grass and leaves looking for all the world like a chip carton discarded into the dyke. Fortunately on seeing the car it jumped around the hedge base and hid from view. I hope it doesnt end up as stoat pizza....
Posted by Stewart at 8:17 pm 2 comments: 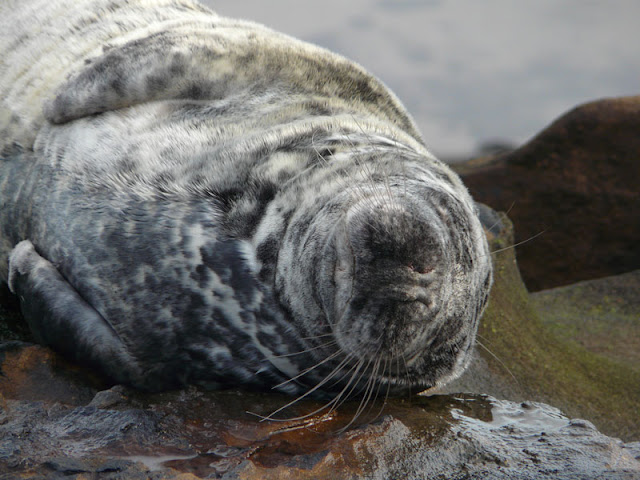 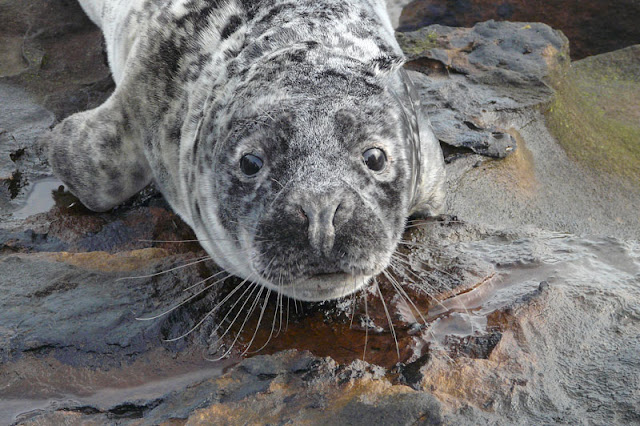 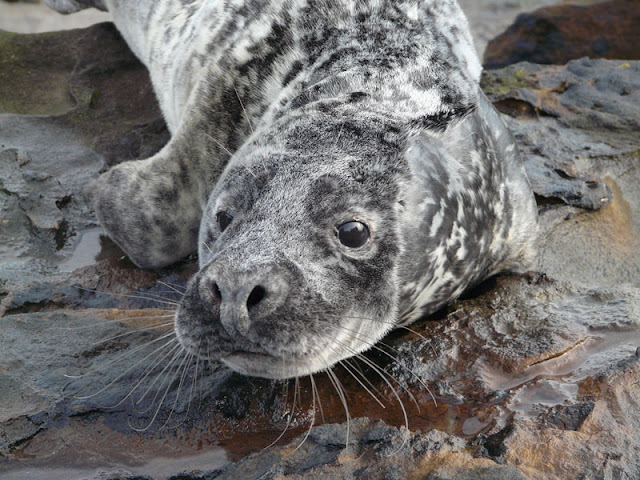 Now, if that is the end of the snow, my first crocuses and narcissus have just opened in the garden so can we just let spring get on with it...please.
Posted by Stewart at 7:44 pm 4 comments: