Ours, that is. In an almost Robinson Crusoe style, it is now 17 days since I have been birding. Even dog walks around the doors have been either in the dark or in storm conditions. I shouldn't complain because the Northumberland coast has been positively summery when compared to the weather in the western reaches. We have had heavy rain and strong wings but some sun too, I know because I can see it from the window of our office at work.

Although I have an untouched compliment of annual leave at my finger tips, I am choosing not to go there while this foul weather persists, instead saving it for more productive times.

So far this year my moth trap has been out once and I have even not been out for the last two weekend, something that may be unprecedented in recent times!

I wonder what this Sunday will be like? At least the sun is rising over the horizon now at 07.25. I can feel it, there will be some good weather soon...

Posted by Stewart at 8:29 pm No comments:

Last year I was going all out to do a patch year list with my Blog Pal, Steve Gale at ND&B and in doing so had some great birds and broke my own patch year record which can't be bad. January 2019 ended on 89 species including such local megas a Red necked Grebe and Firecrest.

Fast forward to 2020, a new decade. I have not been hammering things as much due to less work days off ( I had extra last year due to a holiday reshuffle) and pretty crap weather at weekends. So, I ended January on 76 species. Not too bad I suppose with only one bird that I didn't see last January. The best was the long staying Water Rail in the wet wood, 2 Kingfishers on the pond, several Barn Owls and a single Chiffchaff on one day only.

What this means really is that I have several common species I should have seen by now, waiting until a quiet February day to boost the total... I bet Ringed and Grey Plover don't play by the rules...

The first quarter of any year here is much quieter than the final quarter so I am sure things will balance out by November...

The forecast didnt look promising yesterday morning when I met with John at Alnmouth Cricket Club. It was calm and cold but heavily overcast. Drizzle was just trying to get through.

We had decided to check out the Coquet Estuary as we hadn't been for ages and there had been a lot of gulls in the mornings this week, as I was passing on my way to work. You would think they knew. This morning at the weir, it was high tide so the actual weir was totally submerged and there was only a lone Black headed Gull on the shore. One. On Friday there were 300 or more assorted gulls but not today. Highlight were two Foxes chasing each other on the far bank , 6 Roe Deer, 1 Little Grebe, 15 Mallard, 2 Goldeneye and 3 Herons. A Song Thrush was in full song, my first of the year and a portent of things to come.

At Amble Harbour the slow theme continued. Even the local Med Gull wasn't on its usual rock. We did have 1 Purple Sandpiper, 8 Red throated Divers, 1 fem Red breasted Merganser, 18 Eider and 10+ Turnstone though.

After a stop for some snacks in Warkworth we headed up to Birling Carrs ( you might remember the posts on here about the Arctic Redpoll a few years ago? There.) The redpoll field had been ploughed recently so there was nothing here either. Then the rain started.

We decided to check the sea, getting wet in the process... viewing was good but we didn't do better than 15 Red throated Divers and 2 male Red breasted Mergansers,

Back at the car we noticed that the field to the north was stubble with some rape plants and Groundsel growing through. A few Reed Buntings were active along the track so we decided that we couldn't get more wet and to give it a blast.

As we wandered the stubble hoping for a Lap Bunting, we had a good flock of 40 - 50 Reed Buntings, 40 Meadow Pipits, 38+ Skylarks ( with one smaller one with them that we followed around but couldn't make it into anything other than a wet Skylark.)

As I climbed over the hill I flushed a single goose that flew towards me very closely. Head on it had an orange and black bill. I shouted to John that it could be Bean Goose and we watched as it circled giving us enough on it to confirm indeed a Tundra Bean!  The upperside was generally dark brown with a grey wash on the primary coverts but no pale grey forewing shown by Pink footed. The bill was longer and the bird seemed a bit larger. It began to call as it circled. I had no idea what Bean Goose called like, but noted that it was a deep nasal double or single 'ang-ang' and 'ack'. Not Pinkfoot either. As it left, John checked the call on his phone from Xeno-canto and sure enough the voices matched. A bona fide Tundra Bean Goose at close of play. A good record here.

Near by 4 Whooper Swans and 3 Bar-headed Geese just brightened things a bit more before it was time for home... 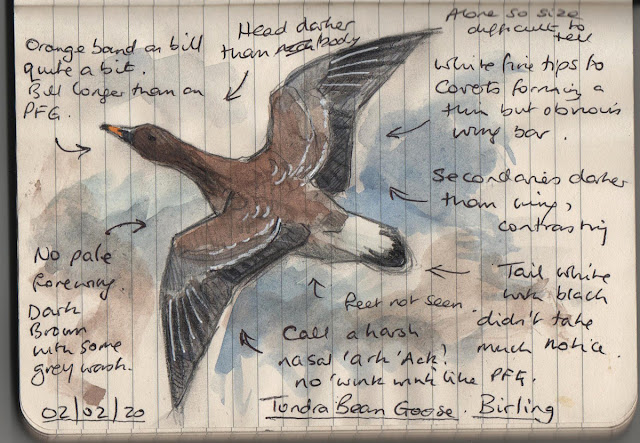 Posted by Stewart at 7:47 pm No comments: