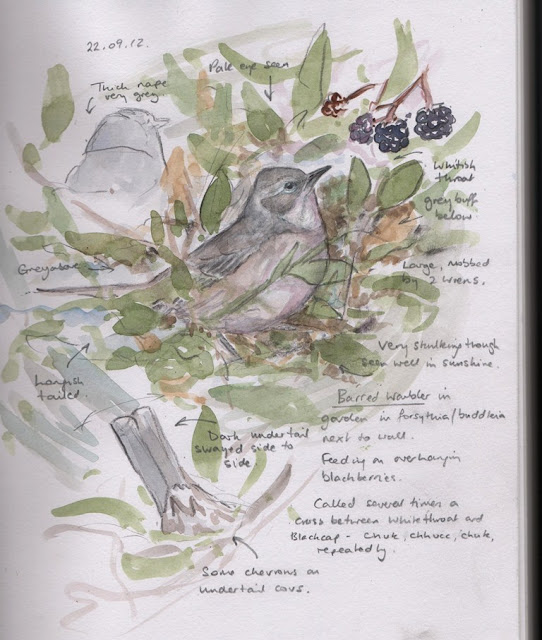 A nice sunny day today with a light northerly shifting to the east in the afternoon.

After a day at Alnwick Food Festival, we decided to have a glass of wine outside and catch the last of the afternoon sunshine. Sitting quietly and a few birds began to appear along our overgrown drive wall. A Wren attracted attention by clucking through a buddleia hunting the undersides of leaves for residue moths above the trap.

Soon, another, larger movement attracted attention. A bird appeared no more than 15 feet away mostly obscured but clearly different. With the naked eye, a plain looking bird lunged at some blackberries and dropped back into cover. Even on this brief view I suspected who this was.

I sneaked off to get my bins and camera leaving Jane 'on guard.' On my return the bird was still there but on the back of the bush in the sunshine. After about 5 minutes that seemed like an hour, it rattled the bushes and moved closer then -  out it came, a Barred Warbler. I knew it but had to eliminate Whitethroat and Garden Warbler first. It grabbed another bramble and moved back into the sunshine.

I took the camera around the other side to view from the field hoping it would come into the open, but it always stayed just behind cover, upsetting the local wrens.

I must have been obvious to it, as it soon started alarm calling 'chukk chuuk, chuukk' not a 'tack' or a 'churr' but half way between both. It then flew, unseen by me, but Jane watched it disappear into our garden where I left it to find food in peace. Hopefully it will be around in the morning for another look...

This is my second garden Barred after one in October 2010, that one only 10 feet from where this one was, Birds must follow the edge of the copse along to our garden from the coast only a couple of hundred yards away....

Bird of the year by far.

BOVINE ARE COWS. Thats clear then.

So, Bovine Tuberculosis is a disease of cattle, that has spread to Badgers.

Not the Badgers fault. They have not started some heinous contagion and are wiping out our dairy herds, oh no, the opposite is true. It was the cattle that passed the disease on in the first place.

So how come this government can set about killing our wildlife for this....

Petition is now at 71,000. Come on get someone else you know to sign up. You ALL know someone who would but hasnt yet. Click HERE

Please.
Posted by Stewart at 10:12 pm No comments:

...about this governments proposed cull of 70% of the Badgers in England.

This is all in the name of stopping bovine TB. I am too angry to write properly so please see my points below.

I heard a scientist from DEFRA on Radio 4 yesterday saying this is crazy. If you eradicated 100% of all Badgers in the UK ie made the species extinct, you would reduce bTB in cattle by 16%! Yes that's right - 16%. Even he, who spent years doing the report, says that a cull is crazy. But the government is ignoring this to appease the NFU.

Only 1% of Badgers has bTB but they will kill off 70% of the population.

The proposal is to cull 70% initially in the SW. They do not know how many Badgers there are ( using a decade old survey for stats) so how can you know when your killing quota is up?

But best of all,lets ignore the stats and look at the principles. How the hell can anyone justify a wipeout of our largest land carnivore for the sake of livestock? This is a protected animal and not long ago Badger groups across the land were reinforcing sets to stop poachers digging them out. Now it is looked at as vermin.

The Badger is one of the best known and loved icons of British wildlife and countryside. It will be gone. Just like that. Wiped Out. Almost.

If this can happen to such a well known and loved creature what do you think will happen next? I cant see Hen Harrier / Goshawk / Buzzard / Eagle / Kite / Raven protection lasting very long. After all, they have an effect on livestock  too. Why not remove 70% of those? Watch this space, it will happen. Not to mention Otter / Fox/ Pine Marten et al. this has massive future implications for all conservation in the UK.

Look at the crap we spout about saving Pandas and Tigers and even Turtle Doves. Not worth a toss to this government and its ilk. Millions spent by tax paying members of the public to conserve our natural heritage, for what? Just to have it deliberately and systematically wiped out in the future.

These animals are not 'owned' no one has the right to eradicate 1% never mind 70%. These are sentient beings who were here when the wildwood covered the land. Have they not got enough to cope with now, without this. Intensive farming, roads, pesticides, herbicides, buildings, increasing population etc etc

If you have any interest at all in the countryside and its wildlife even if it is just birds, think of what may happen if this goes ahead. If you subscribe to any natural history society, bird club, wildlife trust, conservation body, the RSPB, The Widlfowl and Wetlands Trust, The Hawk and Owl Trust. If you subscribe to British Birds, British Wildlife, BBC Wildlife, Bird Watching Mags surely you must disagree with this ridiculous cull. If this is so...

Please sign this petition NOW - Click Here ( No not tomorrow, NOW! It will only take a minute)

Try to get anyone you know to do the same. Imagine, when Badgers are as rare as Pine Martens...Its too late then.

I dont think I have ever felt so helpless and mistreated by our 'democratically elected' system.

I fucking despair for the future of this country, I do...
Posted by Stewart at 10:09 pm 7 comments:

In recent years, September and October has been more reliable for decent weather than the traditional summer months, certainly up here anyway.

Today had that hazy late summer feeling with a mild breeze.

We had a good walk up around Detchant Woods this morning where a few butterflies were on show with 16 Speckled Wood, 1 Wall, 2 Peacock, 2 Small Tortoiseshell and 2 Red Admiral but the dragonflies were the highlight for me. A few Black Darters, still in teneral dress, hovered around but 6 Southern Hawkers showed nicely, even allowing a photograph.

After lunch in 'The Barn at Beal' it was back home and into the garden. 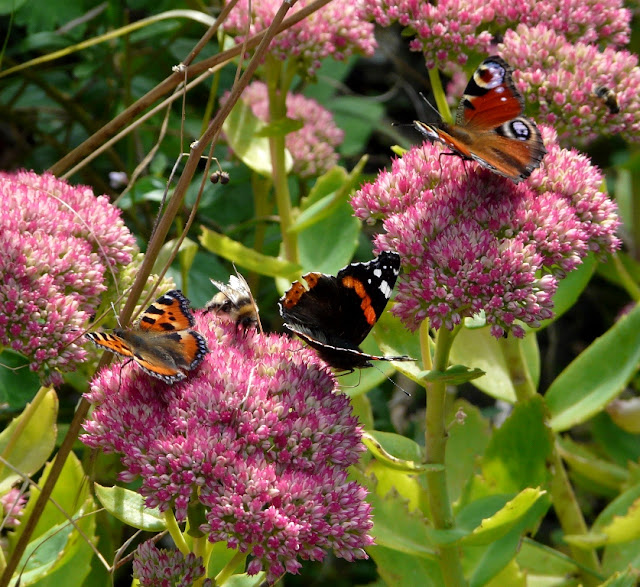 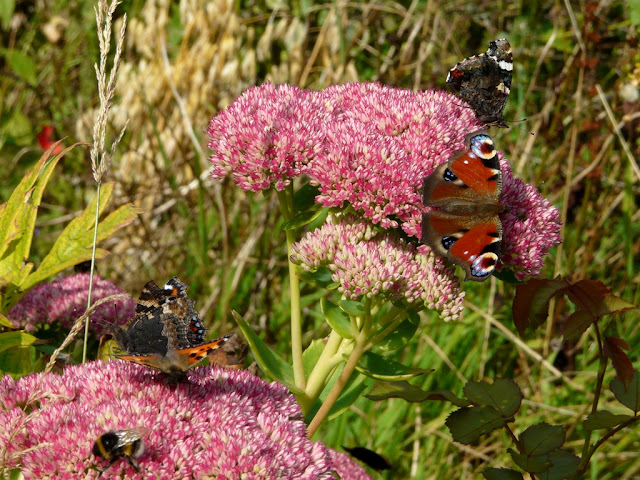