Its sometimes good to be late for work. This morning I was running a half hour or so behind schedule, and with a fallen tree reported to be blocking the route south via the coast I headed west towards the A1.

and this is what I saw for my trouble - 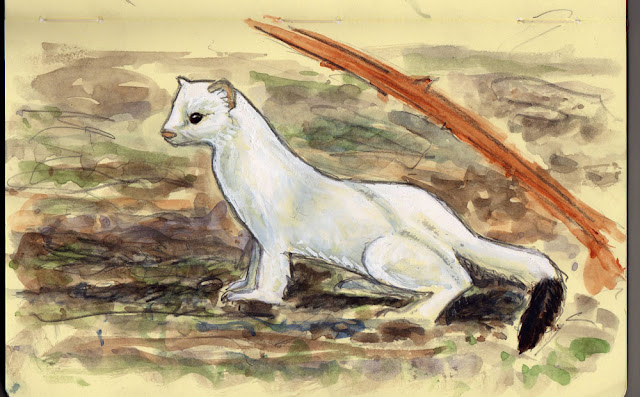 An absolutely pristine fully white Ermine scuffling through the base of the roadside hedge at Littlehoughton.

I spent the two very cold spells in 2010 looking for these in drifts of snow. When the snow melted I felt sure there would be Ermine to see against the dark brown leaf litter, but all I managed were two semi-ermine, almost white but with a hint of stoat about them. Now, in a mild winter with scarcely a flake of snow this turns up. I see a few  Stoats around here and have seen three or four in recent weeks but all nice russet ones. I never considered the appearance of a ghost-stoat!

It just goes to show, you never know what you will find next.

I would like to say that I regretted not bringing the camera today because I missed the shot of a lifetime, but no, as it happens, it wasn't really needed.

The wind was blowing a strong WNW but at least it stayed fine.

I picked John up at 8am to go over to Branton Pits to do the WeBs count.

On arrival, a flock of geese were resting in the field south of the caravan site. There were 6 Russian Whitefronts, 12 Pinkfeet, 4 Canada's and 193 Greylags. Two Stoats were seen, one very well as it ran through the car park near us, pausing briefly. A good start then.

A suprising number of wildfowl were well scattered, taking shelter in inlets and bays out of the gale.8+ Goldeneye included displaying males, 7+ Goosander plus assorted Teal, Mallard, Tufted and Coot. A Kingfisher found a warmer spot in the sun in the lee of some rushes to its liking.

Along at Hedgely, more wildfowl were on with another hundred Greylags and 74 Canada Geese plus 72 Mallard. A pair of Dippers were displaying on the river.

Nearer home, at Alnwick, we stopped to check out the reported site of Butcher's Broom but failed to locate the site let alone the plant. Not to be beaten, some ferny type things on the wall proved interesting . Harts Tongue Fern and Maidenhair Spleenwort were familiar being found on walls around Howick, but a few Black Spleenwort were identified later on at home, a new species for me (but its not hard really, I've never heard of the thing before!)
Posted by Stewart at 7:57 pm No comments:

A bit nippy on Sunday morning, -5 degrees, up to about 3 degrees by lunchtime. The bonus though, was the crystal clear sky and bright sun with no wind.
A walk down the Long Walk and back by the coast was mainly uneventful again, but a few new species were added to the year list - 1 male Sparrowhawk was hunting near the frozen pond, observed by the swans, bored of standing on the ice, 3 Golden Plover flew S at the burn mouth, 10 Skylarks flew north in a tight flock over the Village Wood and a nice male Reed Bunting was coming into summer dress just outside the village hall.
Also of note were 3 male and 6 female Goldeneye on the sea and a flock of 70 grey geese flew south too far out to id. On any other year they looked like pinks, but this year they may just have been whitefronts so I'll await a better view.
Although the weather has been 'easier' this winter, the birding has been slow. In the hard conditions of the previous winters, species including Water Rail, Mealy Redpoll, Raven, Woodcock, Peregrine and Merlin had all been recorded by now. The first three may be a struggle this year. 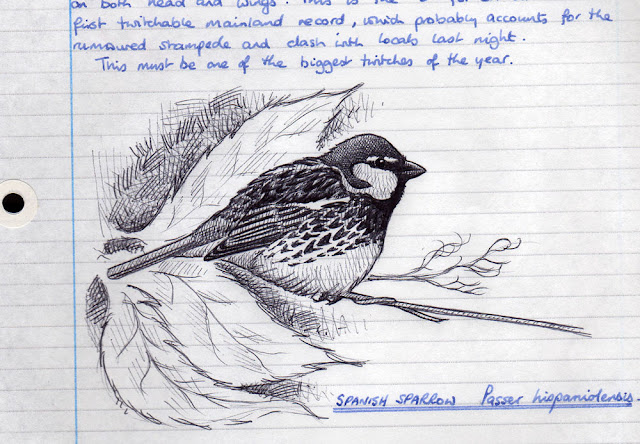 What a fine bird he was too, singing and trying some stinging lines with the House Sparrow ladies...
Posted by Stewart at 11:55 pm 2 comments:

Now that the New Year is upon us, I have three months to use up my annual leave entitlement. Breaking it down, this means I can, if I wish, work a four day week until April. Which is nice...

Today was day one. I like taking a Monday off.

It was clear and sunny and quite pleasant with that hint of spring about it. The wildlife wasn't to be fooled by this though as there were no birds singing, and while clearing a wild corner of the garden to make way for a compost heap, I unearthed an hibernating Hedgehog. He was well wrapped in a ball of leaves, so I took him and his whole nest and created a makeshift box in another weedy corner ( I have plenty of wild areas). This was then covered in leaf litter and loose dead vegetation to keep him sheltered. We look forward to seeing him in spring.

On the bird table, the Tree Sparrow flock now numbers 30 birds, equally the commonest garden bird alongside Chaffinch and House Sparrow! This is a great increase on the 4 - 6 birds I usually get here in winter. A few walks out with Bunty in between doing the garden had very little really - a flock of 5 Mistle Thrushes, 1 Guillemot, 16 Eider, 12 and 7 Grey Partridges and a flock of geese flew N over the sea too far away to i.d with bins.

As soon as it was dark, a Barn Owl hissed loudly as it flew overhead. I just managed to get the torch on to it before it made off over the fields to hunt.

This morning I had a walk from home, down the Long Walk and back via the coast path. About a dozen of so birds were added to the 2012 list with the best being a few parties of Crossbills including one male in song, a pair of Red breasted Mergansers, a few Bullfinches and 5 Nuthatch. I'll total it up tomorrow.

After a cooler, breezy, start the wind dropped and it turned into a mild pleasant day so we took a drive up the coast with Bunty and had a walk on Stringer's beach at Beadnell. No other people were around  so a few waders were pushed up by the high tide - 5 Bar tailed Godwit, 2 Grey Plover   and a bunch of Oystercatchers while another 3 Red breasted Mergansers fed close in on a calm sea.

Lunch was at Seahouses Harbour where there were no white winged gulls, but this pair gave us a laugh next to the car. 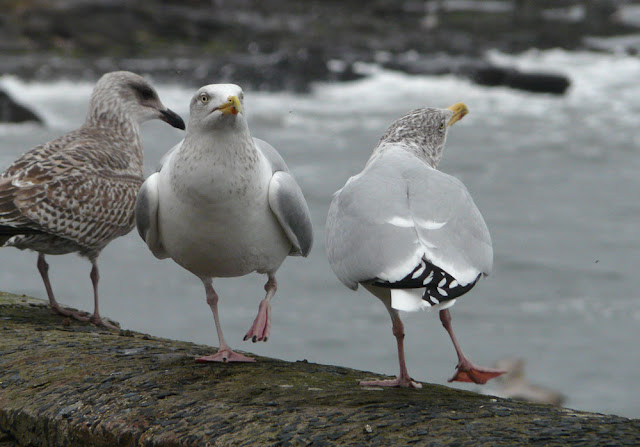 I can just hear Mssrs Tilmouth and Garner and  Dave the Earl Grey cursing my very amateurish attitude with these birds...not once did I check the P10 tip pattern let alone the gonys shape...but their dance after some chips was as good as being at Seghill Tip thats for sure!
Posted by Stewart at 11:08 pm 2 comments:

New Years Day and a Happy Birthday to me.

A nice sunny day, a bit breezy and cooler than recently but still nice for January.

Jane, Bunts and myself took a midday walk north along the coast to Craster where we intended to have a drink in the 'Jolly Fisherman'. Unfortunately it was choc full to the rafters so we didnt want to squeeze in when we had the terriator. Not to worry, a pleasant return journey followed and we had hot chocolate, cake and champagne at home ( see my so called resolutions from the other day about not eating and drinking as much ).


Of the 40 or so bird species seen, all were to be expected, but at least it gets things underway. A Purple Sandpiper and Ringed Plover in the harbour were the best on show.

Today, no new additions, but the most noteworthy thing was about 15 Snowdrops in flower in the copse next to our garden. A very early date indeed!