Yesterday found myself and Mr Rutter down at Alnmouth, checking the Foxton Bends, the Golf Course Pond and the River. Although it was a cracking morning, there wasn't a great deal doing.

A duck Mallard led her brood of 7 across the river under the bridge, my first fledglings of the year. In the Golf Course Pond willows a few Blackcaps and Willow Warblers were the highlight, and along the river 2 Sandwich Terns, 2 Red breasted Mergansers and a Whitethroat were of note. Two Whimbrel tried to land briefly before flying off north.

From here we dropped John's car back off at Shilbottle, 6+ Whitethroats were noted on route, and headed up to Alnwick Moor and Widehope. The target here was to look for Adders, Emperors and maybe Green Hairstreaks. 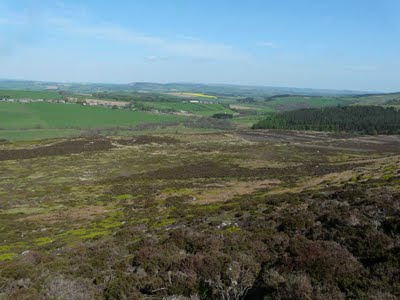 What was immediately apparent were the number of Common Heath moth on the wing. On our walk 40+ were seen including a female that had assembled 3 males to mate. A Green Woodpecker was yaffling while two Buzzards soared above. A couple of pairs of Stock Dove emerged from cracks and fissures in rock faces. 2+ Wheatears skipped around and a Roe buck made off as we broke the skyline.

Further along, where bilberry was more apparent a short 'tea stop' turned up the goods. A single stroppy Green Hairstreak mobbed a Green-veined White that had over stepped the mark by encroaching on its territory, then, surprisingly for this species, it flew off high over the trees and over the road. A closer examination of the site revealed another two Green Hairstreaks sunning low down on small birch and bilberry.


A superb little butterfly, and a great one to find at a new site too, only a few miles from home.
Posted by Stewart at 6:34 pm 1 comment:

A few weeks ago I went to an excellent talk at the Bird Club by Martin Garner on the new 'Frontiers in Birding'. What an inspiration he is. Very enthusiastic and a great orator he had everyone gripped by his tales, theories and lessons. Is it just a coincidence that two weeks later Northumberlands first Black Scoter was found...I wonder.

So, fired by Martins words that no matter where or when you go birding there is always something of interest to question and seek out, I vowed to get stuck in at the earliest opportunity.

Last Sunday saw me and JWR up in the Cheviot foothills doing a WeBs count. Possibilities here are multitude. Rare Gulls, aythya ducks, races of Jackdaw still returning after the cold winter, Iberian type Chiffs etc etc to be found by an enquiring mind and an eagle eye.

That is unless you are an overweight, middle aged, cynic who turns out on a Sunday armed with a bad haircut, two chins and a big flask of tea. The only frontier we pushed was that we happened upon the first Mr Whippy of the year up Ingram Valley...


Any wildlife at all?

But what a cracking morning we had!

Last night a wander around the coast path was met with a small flock of wagtails flying low, south, over the cliffs.There were about 10 'alba' wags and a single male Yellow Wagtail. My hundredth  species this year on the OFFH list.

BT man has been out this morning and carried out extensive line renewals, and socket replacements. He said that I should have a 5 meg speed after 4 hours. 11 hours later and...132kbps. At least it isn't dropping out.
Posted by Stewart at 11:10 pm 3 comments:

I have just read up Martin Garner's piece about Black Scoter in his book 'Frontiers in Birding' and see that he mentions that they look bigger than Common Scoter due to them sitting higher in the water. I thought it looked larger [see notes] but didn't notice it being higher up. Possibly due to it being constantly on the go when I was there...The bill opening it is strange too. I haven't seen anything like this from other seaduck...

I forgot to mention yesterday that I had 15+ Waxwings at Ashington the other day still, and last night a Whimbrel was calling in the dark at 11pm over our garden....
Posted by Stewart at 10:42 pm No comments: 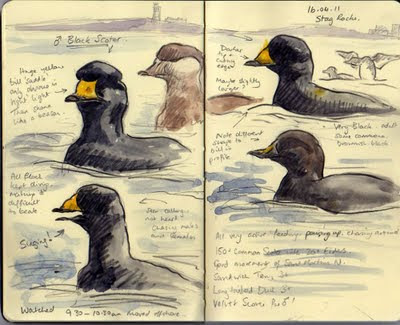 Unable to get up to Bamburgh the last two days, I ventured north this morning to see the Black Scoter. Sure enough, the bird, a nice adult male, was with 150+ Common Scoter and a fw male Velvet Scoter just offshore. Reasonable views were had between its feeding dives, chasing around after female Common Scoters and calling regularly. I couldn't hear the call, but the bill opening and closing was quite comical.

Also around were 3 female Long tailed Ducks, a few Sandwich Terns and masses of hirundines streaming north, mostly Sand Martins. A Grasshopper Warbler could be heard reeling behind the dunes, but remained unseen.

Right, lets quit while I'm ahead. Broadband speed still only 136kbps so this might drop any minute....
Posted by Stewart at 2:16 pm 6 comments:

Broadband update. Last night's speed test revealed the dreadful truth - 117kbps. Dial-up is 45kbps.For those of you who, like me, aren't sure what that really means, other people in the village have a speed of 1145kbps and complain at how slow it is. At Alnwick you get 4500kbps.

BT Technical Ops rang this morning. Dominic. He was very polite. He said that there is a problem (no kidding), and since my speed test yesterday, my speed has dropped 45 times. He didnt have a clue where or what to do next.

This may finally finish off  blogging from Boulmer Birder. ..

...the Swallows that is. After seeing my first at Alnmouth this morning,  we had 3 at home later in the afternoon, a week earlier than last year.

With my broadband still disconnecting at will, and a speed of no more than 133 kbps, blogging is a bit time consuming hence the lack of posts this last week or more. I have not had a full 24 hour connection to broadband now for 23 days.

Not to be tempted by the Mark Toni's Warbler ( or whatever they call Subalpine Warblers now) or Western Wigeon, Avocets etc, we checked out a few local areas.

A few plants along the disused line here included Moschatel, Bugle and Primrose.

This afternoon was spent in the garden at home - 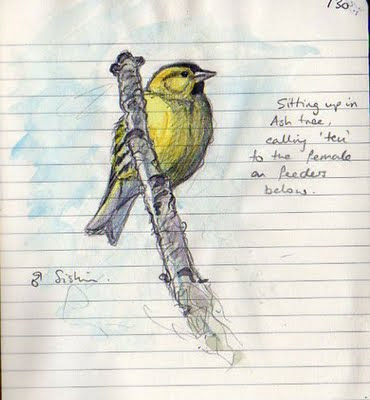 Still struggling with this. Lets see if I dare upload anything or will it all go pear shaped again...

On Foot from Home found a few new arrivals around about... 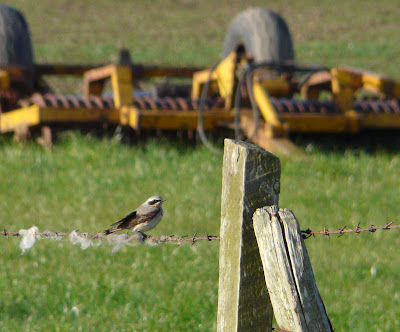 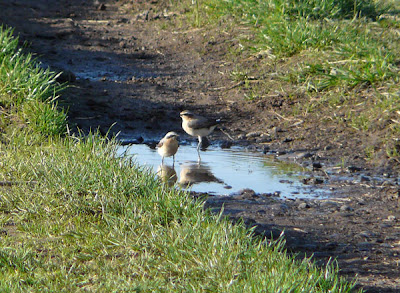 Three nice male Wheatears were together on the teepee track while 3 Sand Martins hawked over Howick Haven. Down at the burn mouth,  a male Blackcap mirrored last years early sighting. Chiffchaffs are in force now singing every 50 yards in woodland. At least one Crossbill was flying around pines at the burn moth too, and not far away I found a Buzzard sitting on a new nest platform, then mating in a nearby tree. Cheeky Jackdaws started stealing sticks off the Buzzard nest when the flew off!

2 Redwings were sub-singing in trees along the burn.

with good shows of Marsh Marigold, Wood Anemone, Butterbur, Primrose, Common Field Speedwell and Red Dead Nettle. Around these and some sallows was my first Bee-fly of the year and a couple of Peacock butterflies. While I was taking the flower photos above, a Roebuck in velvet ( his antlers, not a 70's jacket) was quietly watching me from a glade before dancing off into the trees...
Posted by Stewart at 12:05 pm 8 comments:

Hi all, I haven't moved or anything, its just that my BB is playing up. Its not my computer (tried another one) its not the sockets (tried both) its not the ADSL filters (got new ones)....

its BT! And I still have to wait until the 8th April for them to 'reset my IP' .

It could be sometime before normal service is resumed. I am typing this in the usual 1 hr window I get at this time each night. The other 23 hrs are dead.
Posted by Stewart at 5:06 pm 3 comments: