Well, 2 of one species. This evening 2 Chiffchaffs were vocal in the Village Wood, one showing very well low down in a sallow. Not much else on the bird front despite checking the coast path for Wheatears and Black Redstarts...

Moth trapping was much better than expected. The rain just about held off, it was calm, overcast and about 6 degrees - 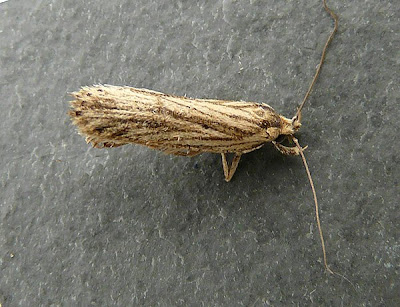 705 Agonopterix umbellana.
I forgot about this one. Its dead, but it was in the trap on Wednesday, but its taken until now to identify it correctly I hope.
Posted by Stewart at 7:40 pm

Yes - look like A. umbellana to me - nice one. Feeds mainly on Gorse.

I'm getting truly fed up at the lack of moths / mothing opportunities down here. If this carries on there will be six traps and two gennies up for sale .....

The weather will perk up for you soon no doubt then it'll all kick off...

Well done on another Early Grey, Stewart.
That A. umbellana looks a smart micro. One species i`ve never seen.

Where on earth is the Village Wood? We walked through Boulmer a couple of days ago but seems pretty treeless - plenty of waders though.

Is it up near the RAF?

Dean - Im not too sure how common they are, I'll check it out, its probably cos its a micro no one records them...

Dave - You are in the wrong village. Village Wood is part of the Howick Hall estate...

Your moths are wonderful. I always enjoy seeing the pictures.