First thing this morning, a Buzzard was going three rounds with a Carrion Crow over the Heugh. I was looking there again at 8.45am and the crow was battling with another dark bird that looked different enough to warrant a binocular check. It was the Raven! After a back flip or two, the big lad flew off towards the Hall and wasn't seen later. Funny pattern this crow has. Present with its mate for the first 3 weeks of January, then one visit by the pair in mid February and now this glimpse...

ADMc and RF visited today to check out the area. Although it was blustery the rain held off, mostly, and we had a wander around the estate. 4 Buzzards were together behind the Heugh and a drake Tufted Duck was on the pond, an OFFH addition. The track to the pond was covered in pairs of mating Toads, so much so we had to watch the ground to stop treading on them. In the Arboretum my first Coltsfoot and Primrose were in flower....

This evening a female Reed Bunting was feeding from our peanut feeder ( cant say I've seen that before) and it was ringed. Who is ringing my buntings! I suspect that the Snow Bunting was from a good distance away, while this Reed Bunting most likely was ringed at Low Newton, maybe by Gary Stringer? 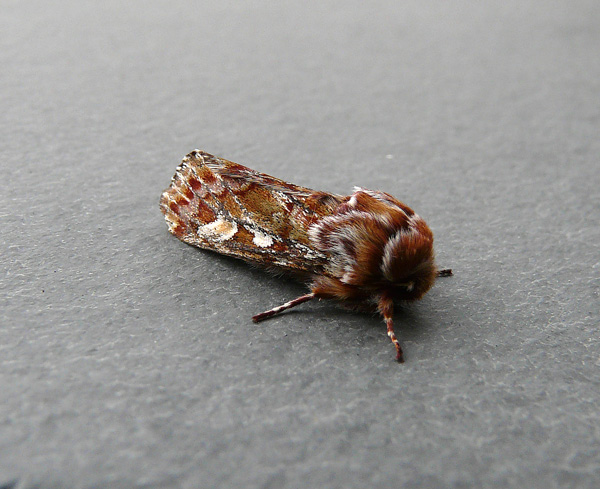 Thats a fine looking moth. I wish I had known you were off today I could have joined you.

They do indeed live up to the Beauty part of their name. Nice one Stewart.

Hi all, it looks better in the photo than in the flesh! I think with the pic making it much bigger the colours really stand out. I was very pleased with it though.

Nigel - You could have come, I thought you would have been at work...