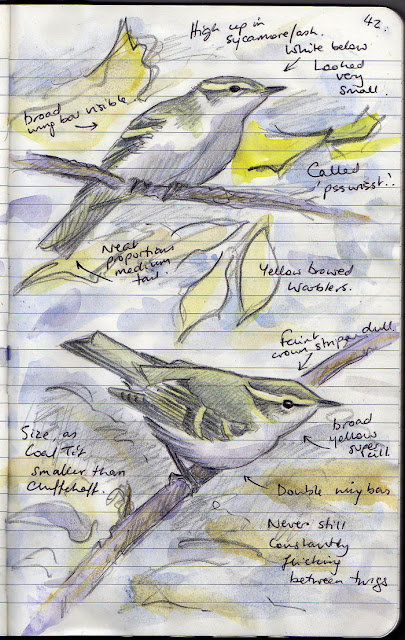 Remember last week when I heard a Yellow browed Warbler calling from the Village? Well, I was pleased to finally get it on to my OFFH list this afternoon.

As there had been a good show of migrants all up the east coast over the past day or two, I finished work early to check out the local area.  No sooner had I gone to check out the copse next to our garden, the familiar psswissp call drew my attention. There it was, quite well up in the joining twigs between a sycamore and an ash, flitting through the foliage, never still, only giving time enough to see the broad supercillium and wing bars before it moved on. Blink and you have to search to refind it, but it stayed faithful to the spot for several minutes enabling me to get a good, if composite, view.

Onwards, I walked south to check the Howick Dene. On route were 2 Wheatear, another male Blackcap and several Brambling flew over.

Once I got into the broad shelter of the trees in the dene things became more difficult. The trees here are huge, mixed with large sallows spreading over the stream sides. Soon, another call drew my attention. This time, 2 Pied Flycatchers, looked comfortable in mature beech trees, wing flicking at me in an agitated fashion. Another addition to the list.

In the densest cover one or two Blue and Coal tits were picking at twigs when another bird appeared in with them. I had expected a Chiffy, but in the bins another cracking bright stripey Yellow Browed Warbler. I was lucky to find this silent individual in this jungle, but it showed very well, low down. This was the very same bushes that held last years two firecrests. Worth noting for the future, that.

On  the return journey home it was largely quiet broken only by a nice female Redstart flushed from a manure heap and seen well on a fence line before flying off.

Well worth the early finish I'd say.

A quick summary of catch -

Burnished Brass seems late, and my first Chestnut of the autumn makes an appearance. Things have gone full circle now, Chestnut was my first moth back in the snows of January...

Glad to hear/see you finally nailed it Stewart and yet more cracking sketches from you.

You always said that you would get a Yellow browed in those trees next to the garden. Good migrants there Stew.

All those migrants in one visit! It takes me years to accumulate that sort of diverse list :-)

I was very well pleased with the one next to home. Its the fist YBW I've had within eyesight of home.

Ennion! I could only wish for an hour with the great man..