This morning before work a quick listen for the YBW was fruitless, but a few Redwings were dropping in plus a Song Thrush or two, so I decided to walk Bunty along the back hedge in the field behind our house. Sometimes I get habitat blindness in autumn and have to focus on sallows and sycamores, leaving other habitats aside. So, with reports of Great Grey Shrikes and Barred Warblers everywhere, I thought the old straggly hawthorn hedge would be a better bet.

Only a few yards along and a single bird broke cover about 10 yards ahead. Hawfinch! and it called a loud 'tchick' as it hurled its barrel belly skywards ( I've got a nerve!). It flew back on me and went back in to the thorn further along. Being a considerate soul ( well mostly) I decided to let it recover in peace where it, no doubt, spent its time crunching up haws with that massive heavy bill. A Hawfinch doing what it says on the tin. 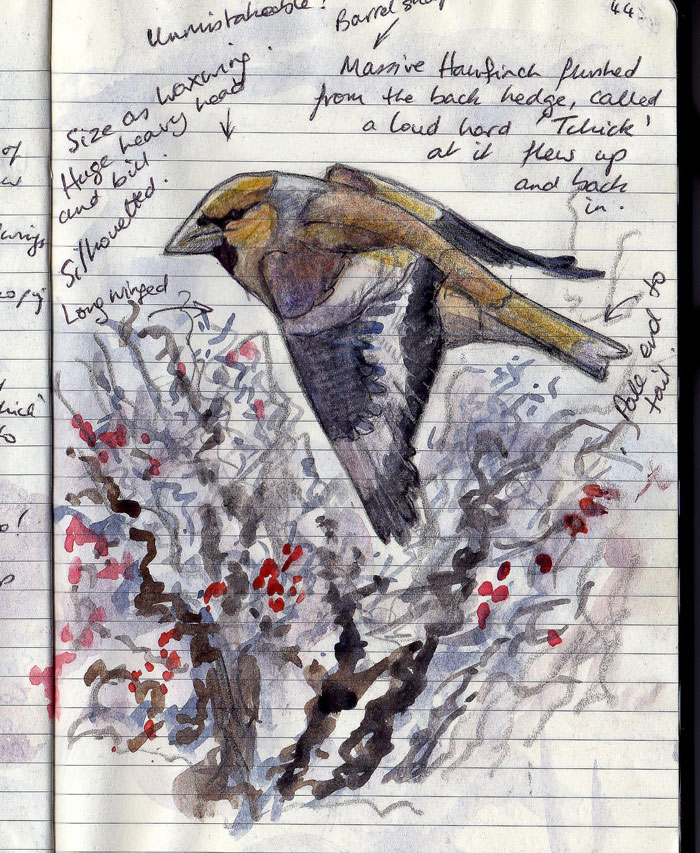 This one appeared on my bird table in April 2005. I nearly keeled over!
Posted by Stewart at 8:44 pm

You lucky blighter!!! Although it's not really luck, you have to be in it to win it! Nice one.

You`re on a roll Stewart and long may it last.

One day i'll find one of them :-). All I need is a straggly hawthorn hedge, I dont know whats the rarer !!

Lucky there alright, I was looking for a Shrike! ;)