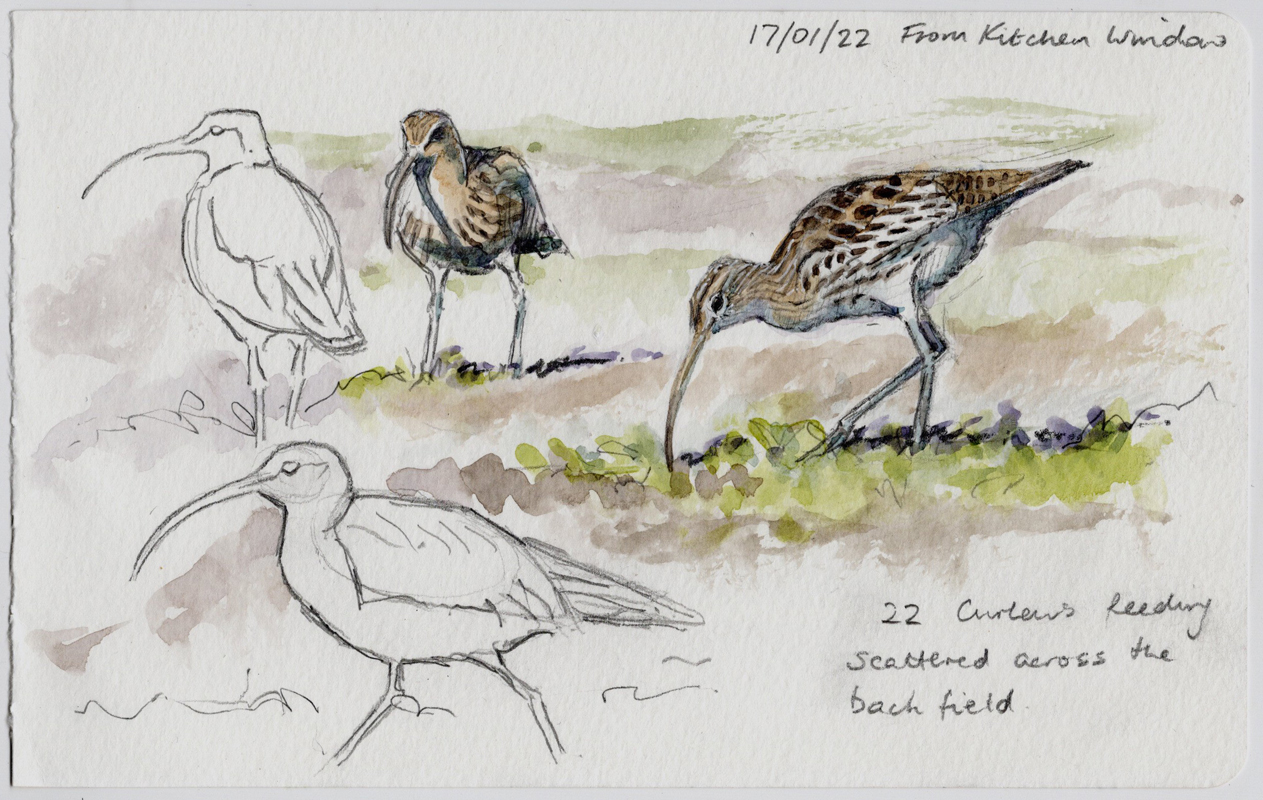 As John was under lock and key with Covid, I was out, at a loose end, on Sunday morning.

Without any plans, I just decided to stay around home trying to fill in some of the blanks in my New Year local patch list. Last week I had jotted down some of the common species I would expect or have had in January in previous years that were playing hard to get.

There were two strands to look for. Those birds that could be had along the shore and those from the woodland areas a short way inland. From the former, I was missing most of the common wintering waders, some wildfowl or seabirds and from the latter the likes of  Treecreeper, Redpoll, Brambling and Tawny owl could all be added. I expected to get maybe 4 or 5 to add, more if lucky.

The day was dry and fine but cool with a light westerly breeze. At dawn, I was standing on the Rumbling Kern, a good high rock feature overlooking the sea and a small area of rocky shore, scanning with the scope. The sea was dormant, with very few birds. 3 Red throated Divers were about it with not even a Razorbill to add. Scanning into the bay at the south 3 Goldeneye, a few Wigeon and 50 Lapwing were all new so it seemed there might be more if I headed that way. Sure enough a nice pair of Stonechats were added but that was it. I couldn't even get a Meadow Pipit.

A change of plans had me heading along to Craster with nailed on Purple Sandpiper and a good chance of Willow Tit or Greenfinch(!). An hours walk around coastal scrub and the village turned up exactly zero. Four Bullfinches looking smart in the bright sunshine were the highlight.

Every night since the New Year I take Peggy for her last late stroll around 11pm hoping for Tawny Owl calling. This is a common bird here, but I only heard my first last night, 17 days in, despite excellent weather conditions. Barn Owl is even worse. Last year they were on show at any time of day, every day, right until the summer. This year zilch. I do now think that those storms have had some serious knock on effect. Only time will tell, to see if there are any breeding successes locally later on.

Curlew from the kitchen window is a good tick. Happy New Year Stewart (If we can still say that 18 days in)

Hi Andrew, long time no see. Happy New Year to you too... we regularly get curlews in the fields around us, yesterday they were lit up nicely and one came down to the flash for a bath ( after I had finished drawing of course). Hope you and yours are keeping well.