I've just re read my previous post regarding Storm Arwen. A bit of an understatement there I believe.

On one of our local upland patches, Brizlee Moor, the wind was recorded by the RAF at 98 mph and maybe a bit more down on the coast where we live!

On Friday 26th November Jane and myself took a trip up to Bamburgh Castle to see the Christmas decorations. We hoped to go towards dusk, but we were contacted to say we should come earlier as the castle would be closing due to the Red Met Office warning that had been put out for the east coast of Scotland and Northern England. Red Warnings a rare things and are linked to a serious weather event that may result in structural damage to properties and the environment with a possible risk to life too.


We were back home by 2pm just as the wind began to pick up. Rather than go into itemised details, it is enough to say that by 7pm the wind was roaring making it difficult to stand up outside. At 7.50pm our house was plunged into darkness as the power went off. Luckily we had expected this as our power goes off at least once a year and this was our third time this year but little did we realise how this would impact our community.

The destruction of large trees around our village was incredible. Large Oaks and Scots Pines uprooted and snapped off as well as lesser trees down everywhere. It was a stand of pines that had blown on to a power pole snapping it and the cables clean off causing our power fault.


We were left back in the stone age for 238 hours or the thick end of 10 days, not being reinstated until 6th December at 6pm.

During this time we were constantly cold and tired. It was just physically and mentally exhausting. Some kind souls said that our wood burner looked 'cosy'. Without it heating a 6 feet radius in the living room we would have died. One person said their grandparents first house in 1948 had no electric. It isn't 1948. Then, people were kitted out for no power with paraffin lamps, cooking ranges that heated hot water etc. Some even found it quite funny. We weren't laughing that's for sure. Coping with 16 hours of darkness in zero temperatures is no laughing matter. It was just survival.

But, here we are past the ordeal now reviewing the aftermath before the letter writing begins...

Yes some. It was good to get out in daylight for a couple of hours to take our mind elsewhere, mostly seawatching.

Saturday 27th November still in the teeth of Storm Arwen.

Only watched from the car for 40 mins as it was really grim. The sea can be too rough for birds to move and today was one of them... 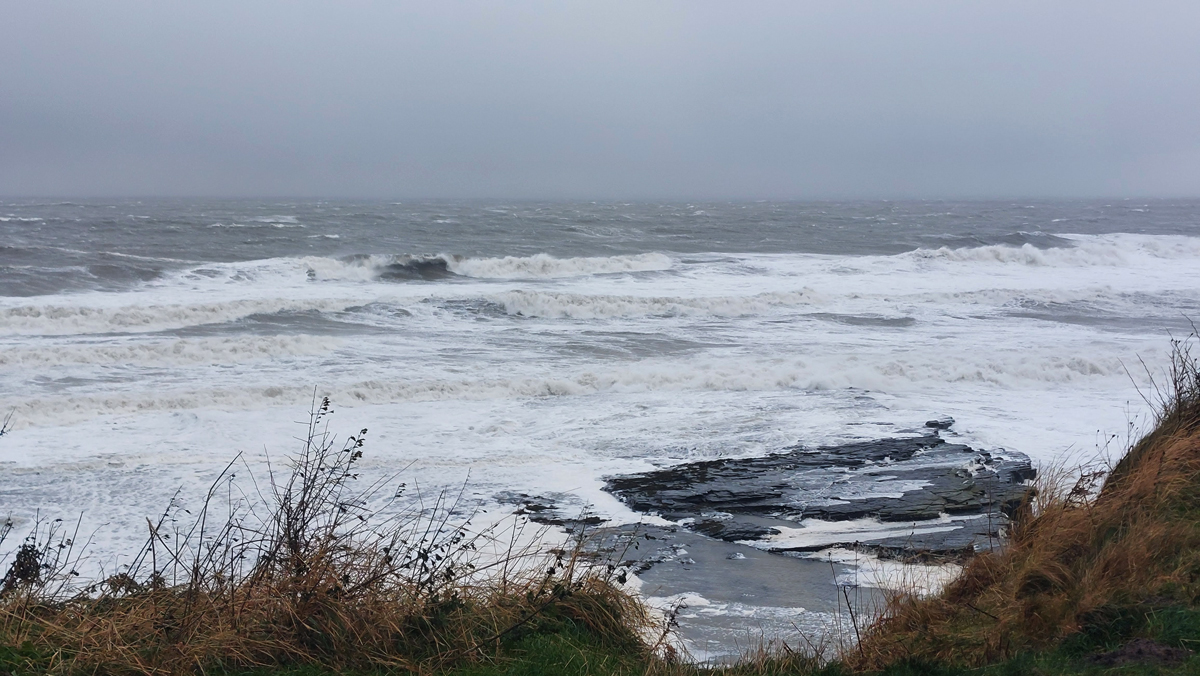 Sunday 28th November I ventured out to Seaton Point from 0830 - 11am. The weather was much better. Bright and freezing. Masses of birds were moving now the wind had subsided a bit. It was difficult to keep up.

Great Shearwater 1 N so close I picked it up with the naked eye and thought it was a young gull! It came over waders roosting on the rocks. In the bins and scope it filled the field of view. Superb.

Black Guillemot 1 N again over the rocks, my 2nd in two days cant be bad.

Some nice birds but no Brunnichs for us.... I didnt take my camera in the storm but Dan Langston did, with excellent results! See Here.

Thank you very much fior sharing these pictures and your account of the lack of electricity. Glad you saw some great birds

All the best,
Chris

Us "southern softies" have no comprehension of severe weather conditions. Fair play to you and the wife for surviving this horrendous episode. If it had occurred in London there would have been political fallout which would be impossible to ignore? I only have the Loch Awe experiences which allow me to get close to what you've just been through. Happily, we could easily pack up and get the van headed back down south. Great post and reality slap to those of us who didn't experience the full force of Storm Arwen - Dylan

Thank you both for the kind comments.

Dyl - Thanks for that. It is difficult to explain what it was like unless you have faced it.
On the Northumberland coast we usually have a drier, but colder climate than a lot of places in the UK. Every so often though, it ups its game a bit, then we are just forgotten. We dont even live in a remote area, 5 miles from the A1 :)

Chris - Yes it was a good spell on the local patch, shame it had the edge taken off it by home circumstances...