We bloggers like an end of year round up don't we. Writing this in mid December my family is one of the lucky ones and I hope yours is too. 70,000 other households are not so fortunate, so while our interests seem frivolous at this time, please try to spare a thought for others who didn't have a good Christmas this year and join me in wishing them all the very best for 2021. Who knows what that will bring?

In Northumberland, this has been a vintage birding year that may not be beaten for a long time so I think it deserves a recap.

Little did we know what the year had in store for us back then. Covid-19 was a new word that had something to do with China.

What did I do this month? Very little as it happens so its best to move on.

The weather was generally poor with stormy, wet days for weeks on end. One trip started a good birding year when we found a lone Tundra Bean Goose in a stubble full of larks and linnets near Warkworth. 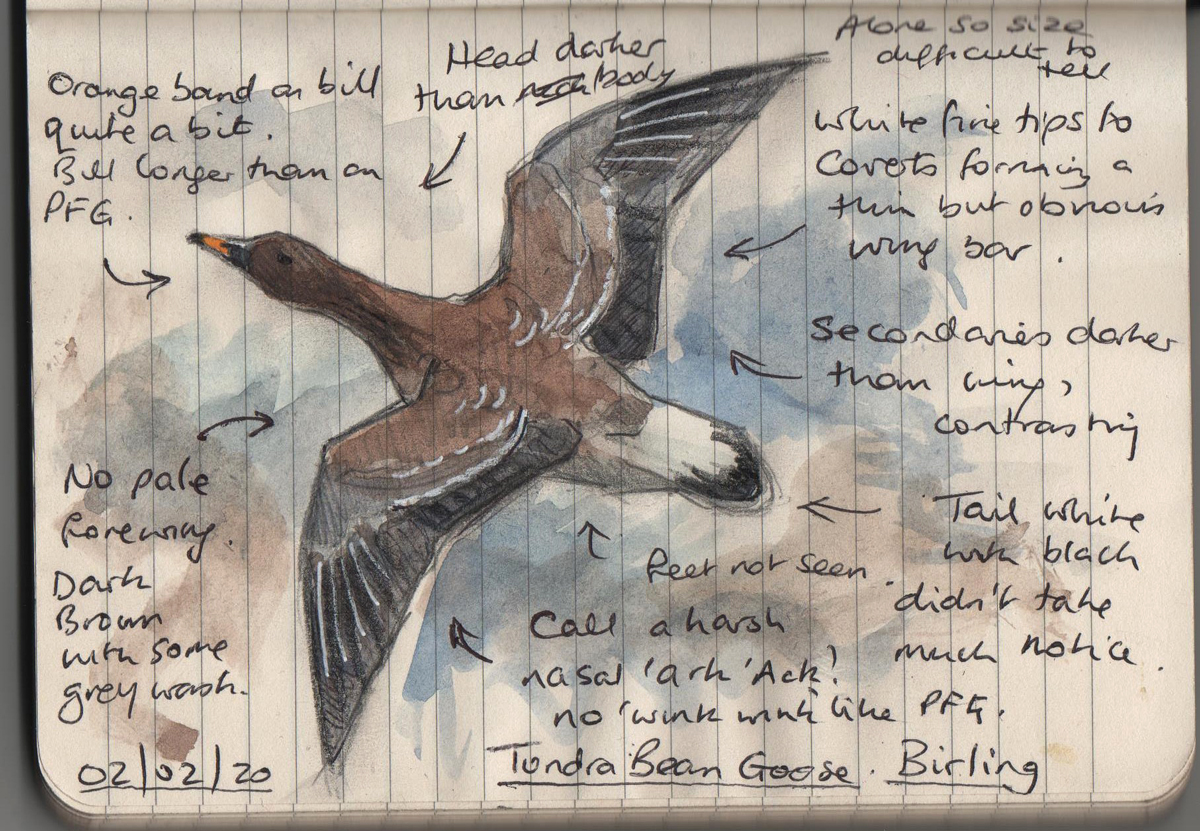 The biggest change of the year came when we were told to work from home from the 20th, and I still am. In April my work colleagues ran a sweep to see when we would be back in the office. I guessed 11th May. No one said March 2021.

Bird highlight was a White tailed Eagle, free from accoutrements, viewed for 30 seconds as it glided without a wing beat low over my house and away west on 31st. A great Northumberland and Garden addition. 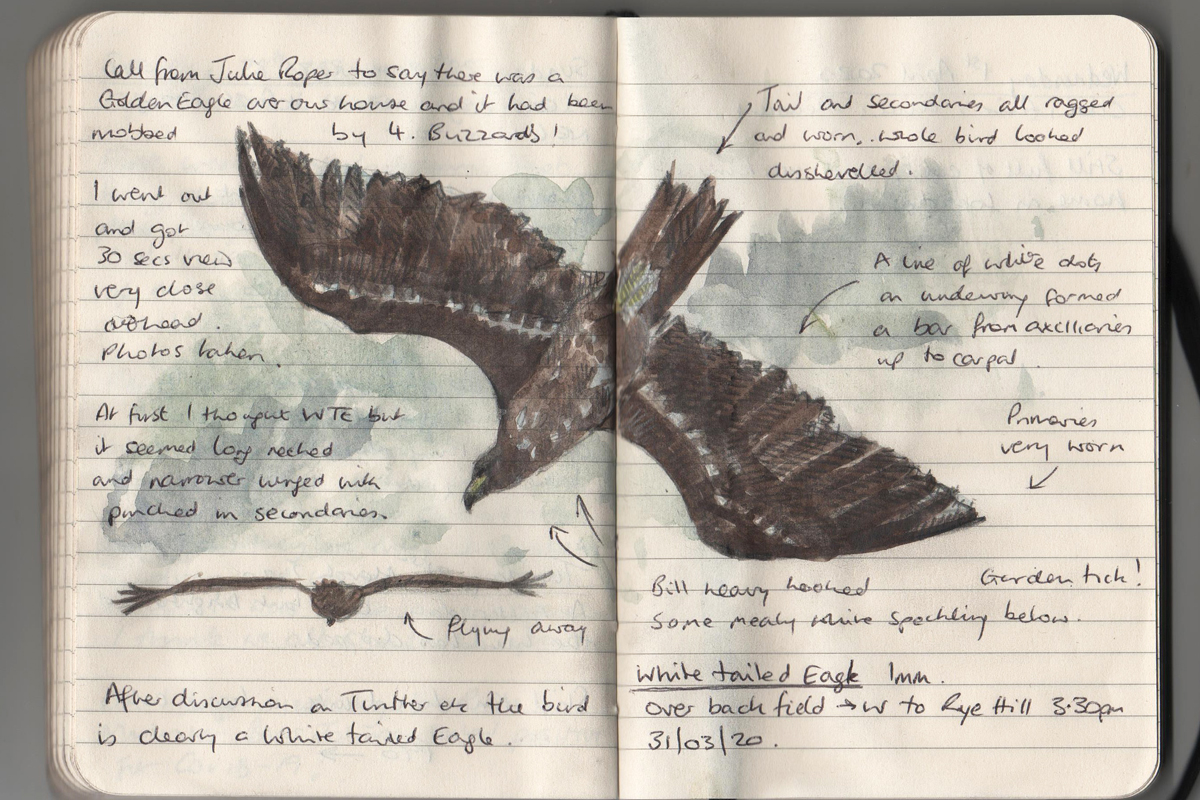 Into Lockdown proper when we only left the house to shop for essentials. Well, we did, others carried on regardless.

This months wildlife highlight wasn't avian, no, a small 'hoverfly' seen very briefly in late March turned out to be a Hairy footed Flower Bee. A first for me and the beginning of daily April visits by these delightful little creatures. They are new to Northumberland recently so to find some in my garden was as good as a Sea Eagle. 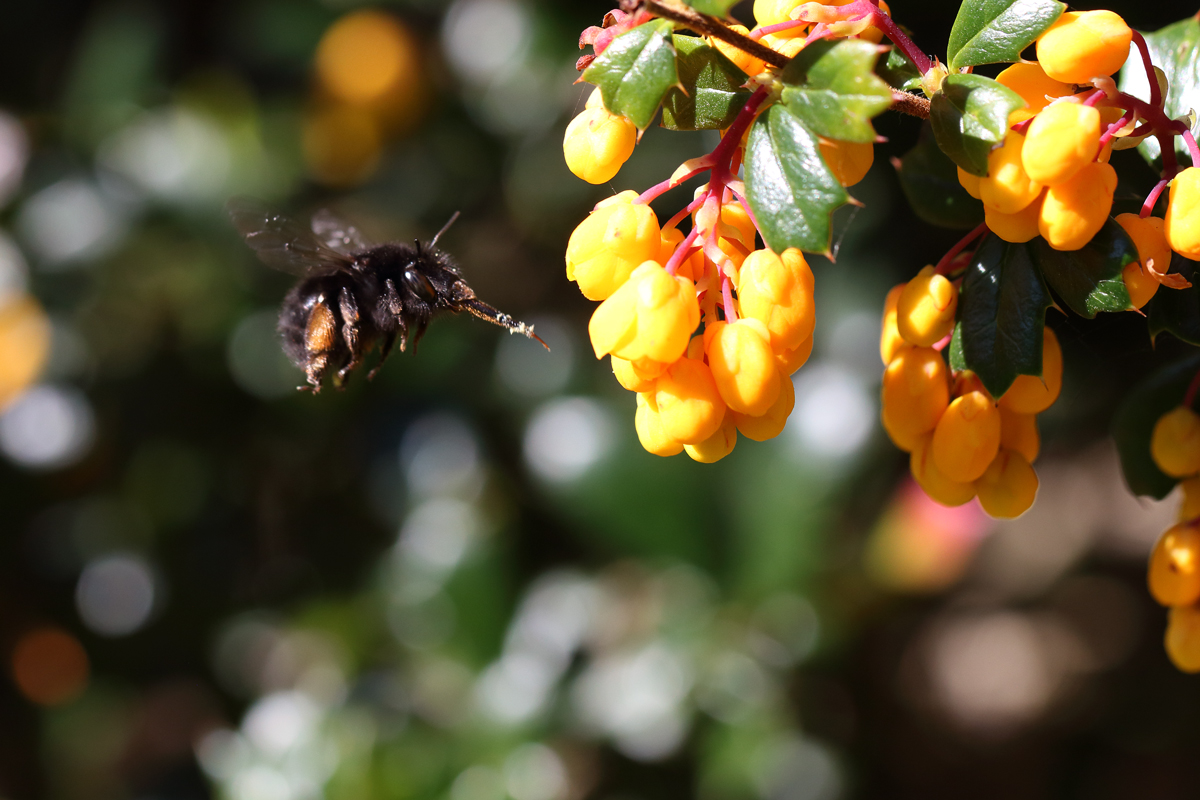 On the 12th my second patch Golden Oriole was singing for 15 minutes in the arboretum. Despite trying to follow the song, it remained one tree away all the time until singing stopped without a sighting.

After a 2019 blank it was nice to find 2 Spotted Flycatchers on on 23rd and on 26th an incongruous Reed Warbler was singing from our garden hedge for a short while. Finally on 31st a Red tailed Cuckoo Bumblebee was a new one for me again in the garden. 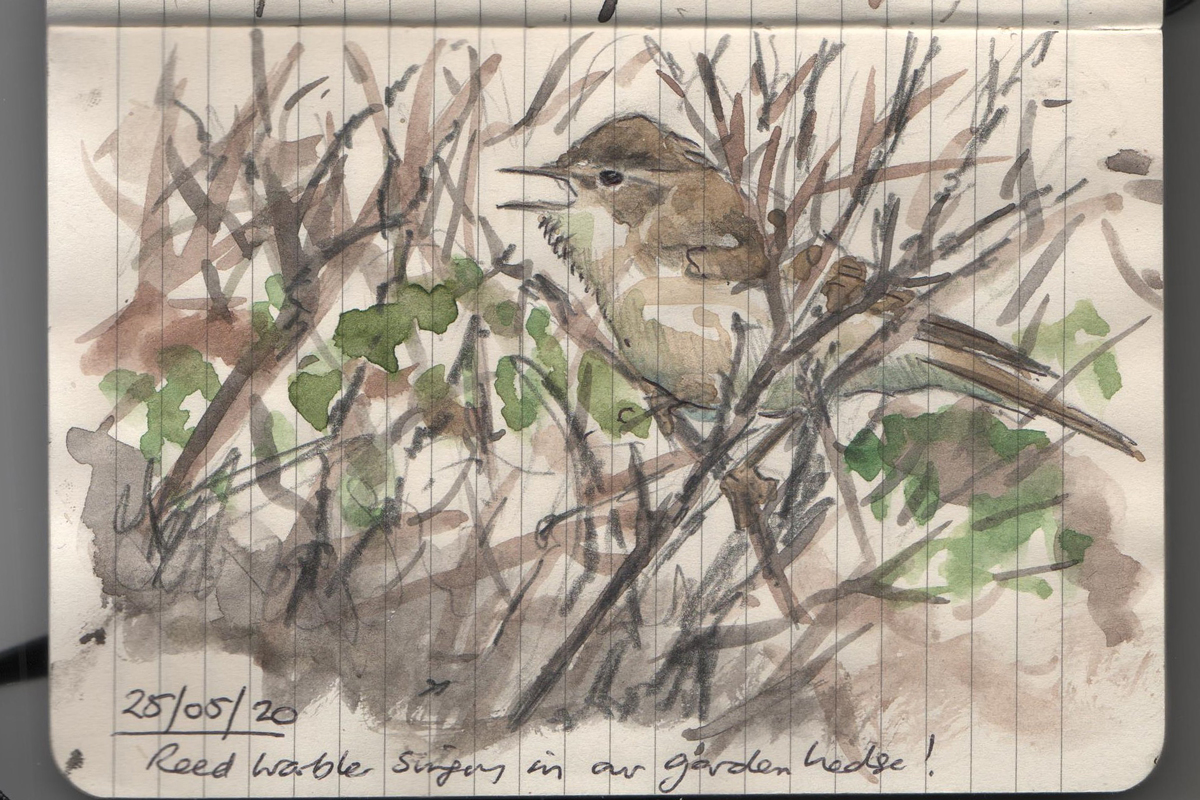 Thankfully lockdown restrictions had been eased in time for a twitch all of 30 miles north to see Northumberland's first Asian Desert Warbler on Holy Island. My second after one at Flamborough 29 years previously. 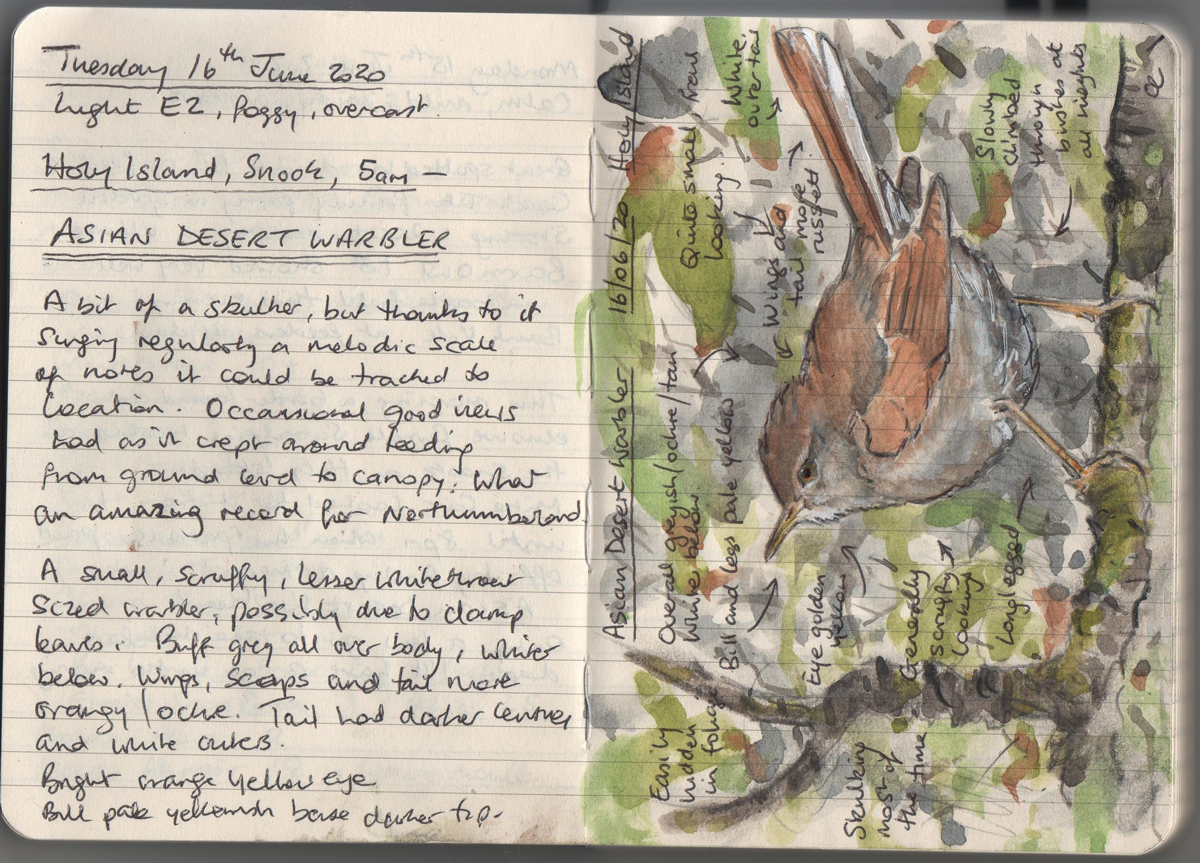 There is only one top spot in July and that goes to Sooty Tern, my absolute bird of the year 2020. After missing its coastal trek in 2019, I hoped for a second chance and even in my dreams I couldn't have hoped for better than the views it gave on the 29th when it spent the afternoon only 300 mtrs from my house. Priceless. 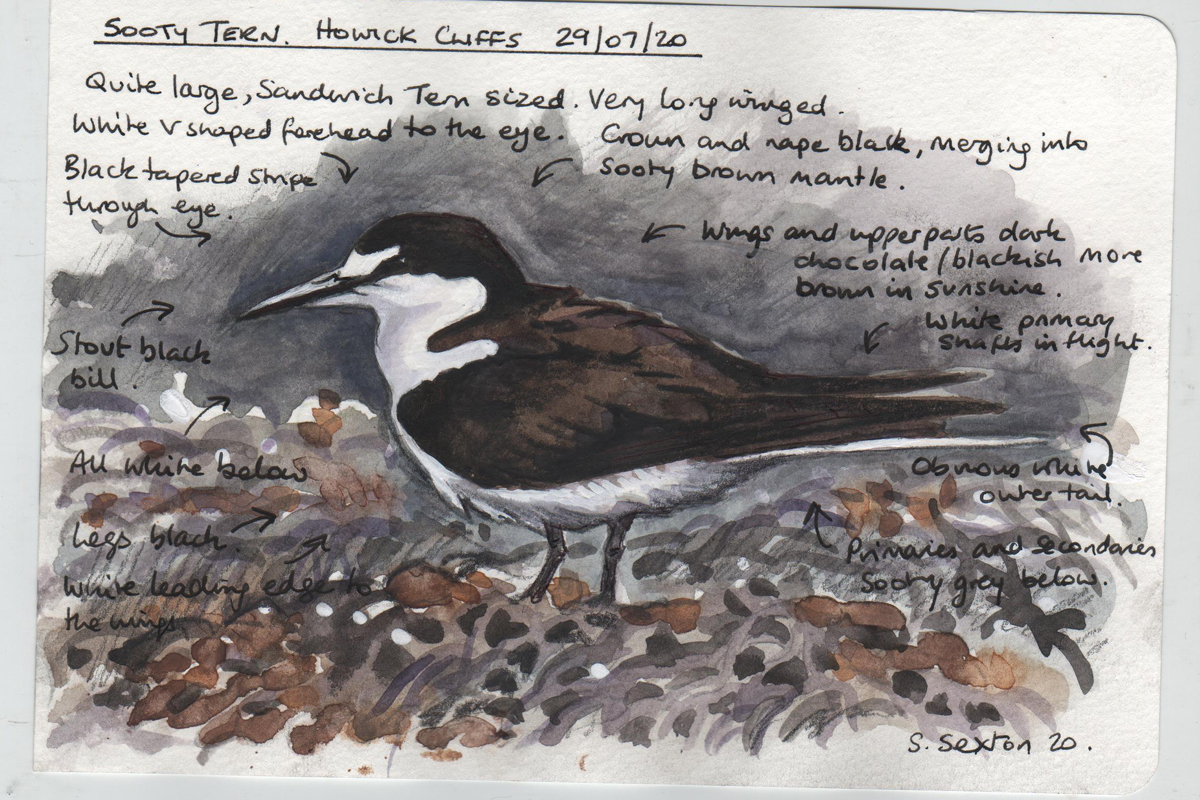 Autumn kicks in properly now but we didn't dare to hope it would be as good as it was. Only 10 days after the tern, we found our own rarity along the road at Boulmer, a spanking summer plumaged Pacific Golden Plover. What a bird. This stunner knocked a good passage of Long tailed Skuas on patch into runner up place with 5 - 9 birds seen on the 17th alone. These and a Great Shearwater on 29th could have easily taken top slot in any other year locally. The Hooded Crow became a village resident. A couple of good moths arrived on 4th with Common Emerald and Southern Wainscot both new to VC68. 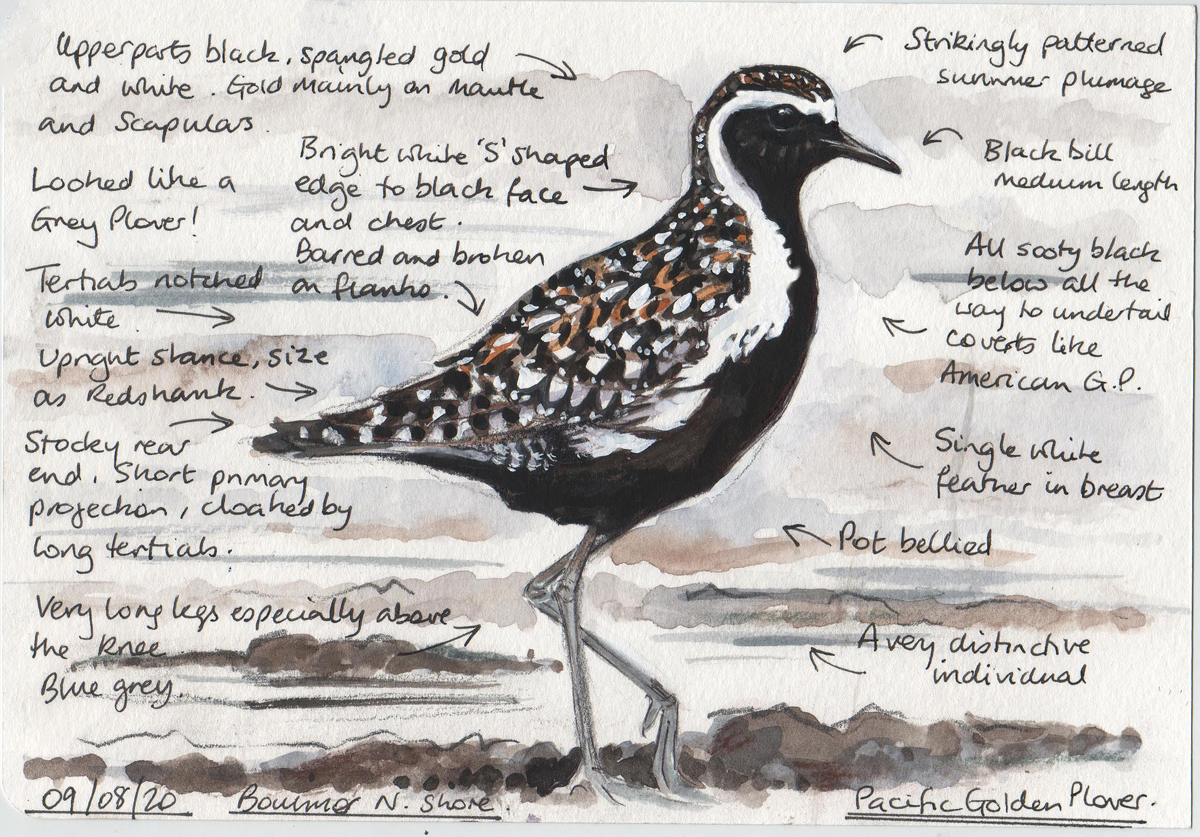 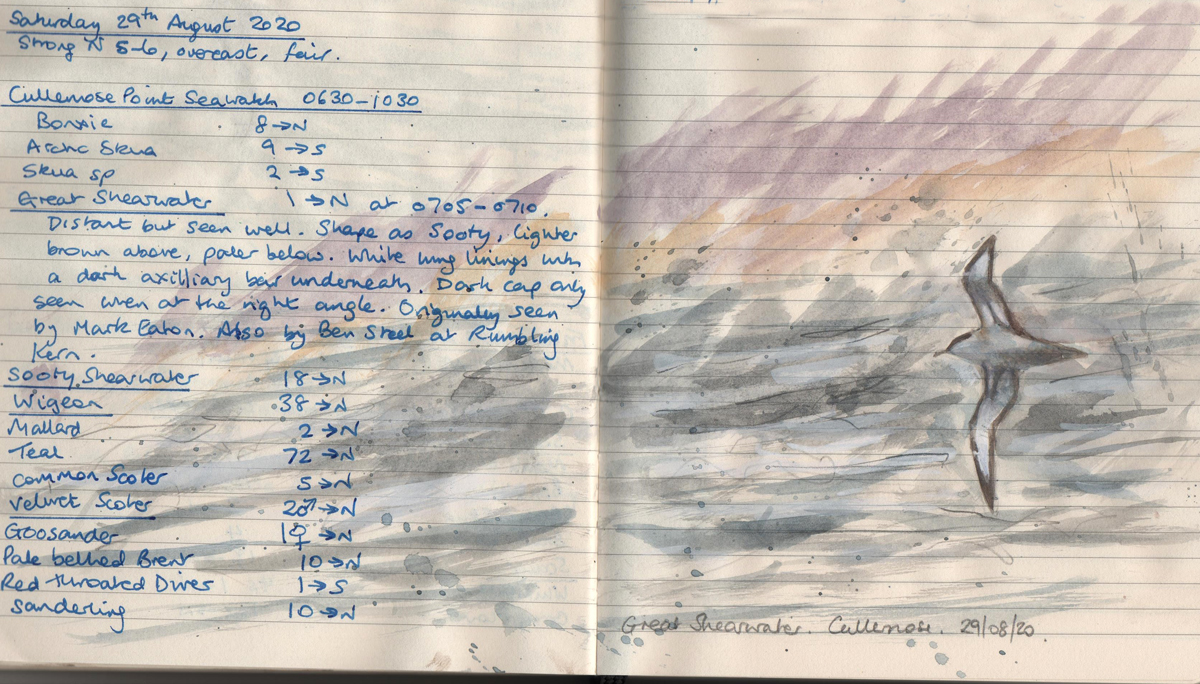 The excitement continued with some good seawatching - 16th an adult Sabine's Gull and 7 Pochards , 17th Buff breasted Sandpiper at Boulmer, 21st 2 Lapland Buntings at Boulmer along with Short eared Owl, Curlew Sandpiper and Little Stint, 26th 700 Sooty Shearwaters N at Cullernose plus Storm Petrel on 27th when the first of the seasons Yellow browed Warblers appeared in my garden.

Inverts are being routinely ignored in this pandemonium but Clay-Triple Lines was new to my garden and VC68. 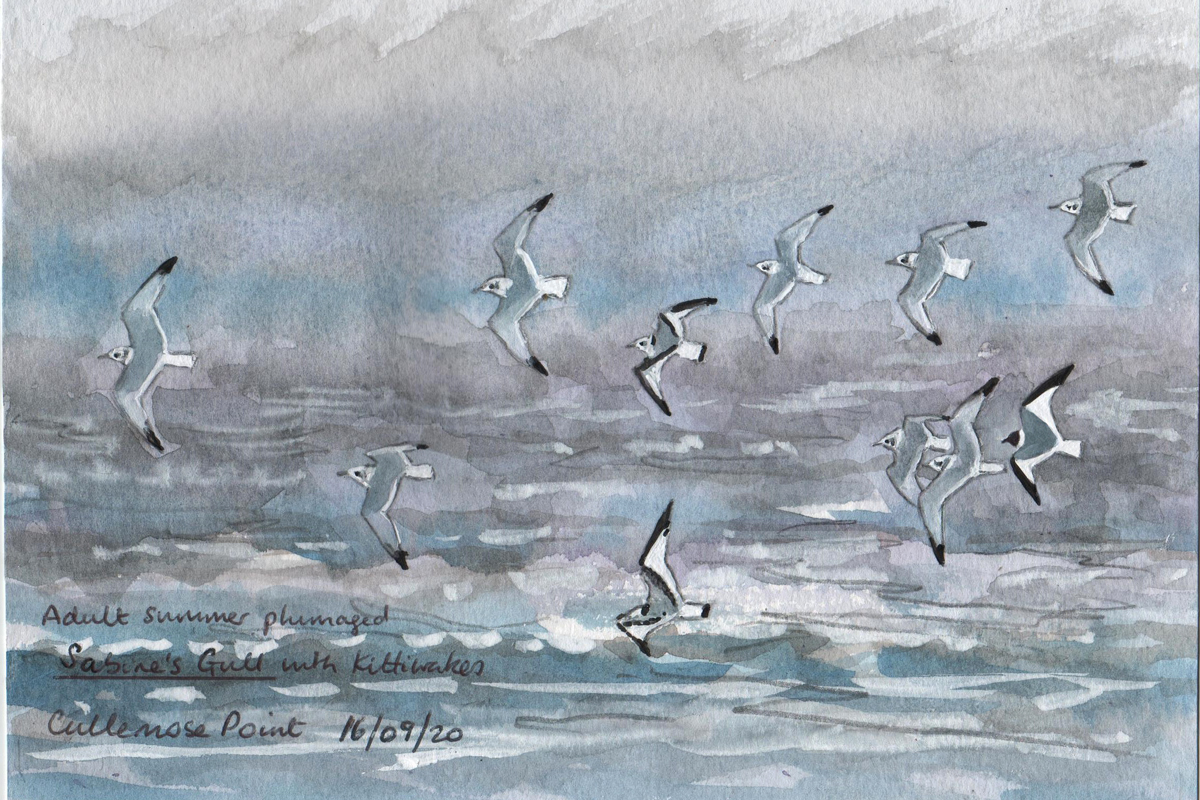 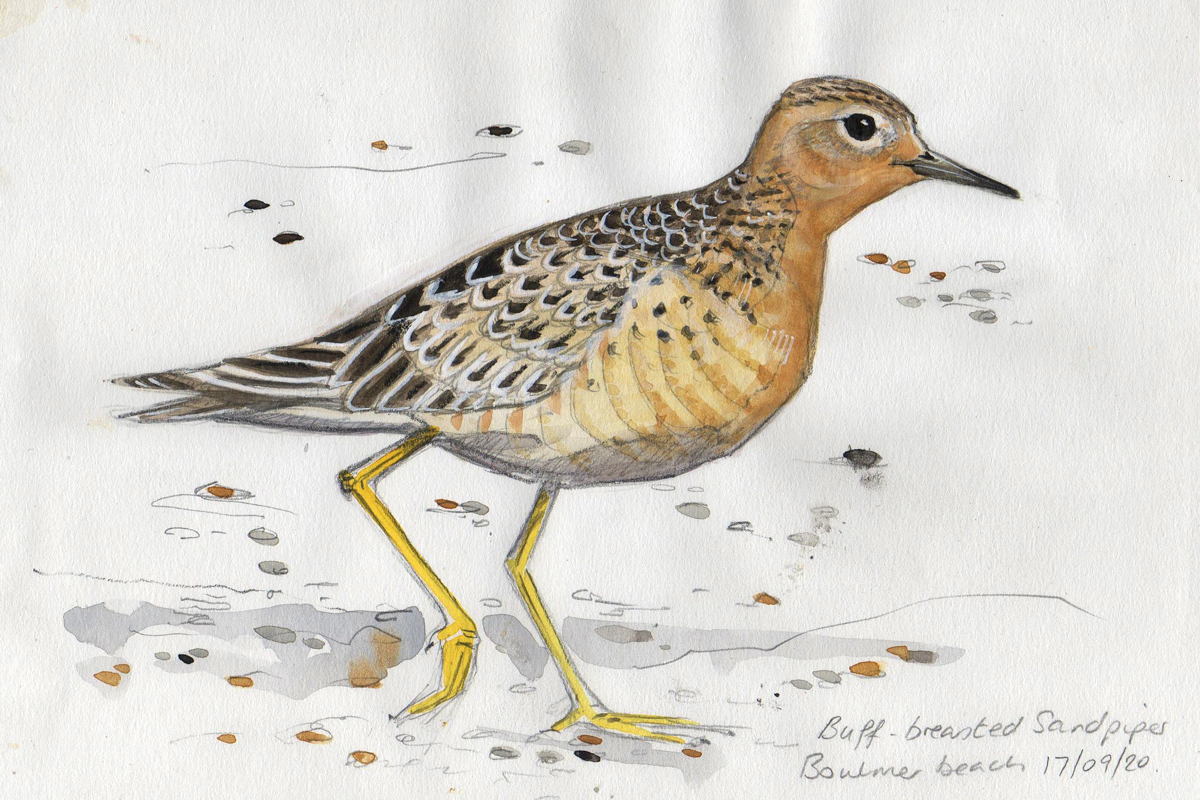 Can things get any better? Of course they can!

On the 3rd a Two barred Greenish Warbler gave fleeting but decent views at Budle Bay, 3 Yellow browed Warblers were in my garden and a male Bluethroat was at Boulmer. The Bluethroat was joined on the 5th by a Great Grey Shrike. On 8th a hand netted Convolvulous Hawk-moth at our garden nicotianas was new for the site. On 15th another UK and county tick came in the form of a Brown Shrike on Holy Island where it was accompanied by a Bluetail, Dusky and Pallas's Warblers that I didnt have time to check out. On 18th a female Desert Wheatear was a welcome self find at Boulmer. Phew. 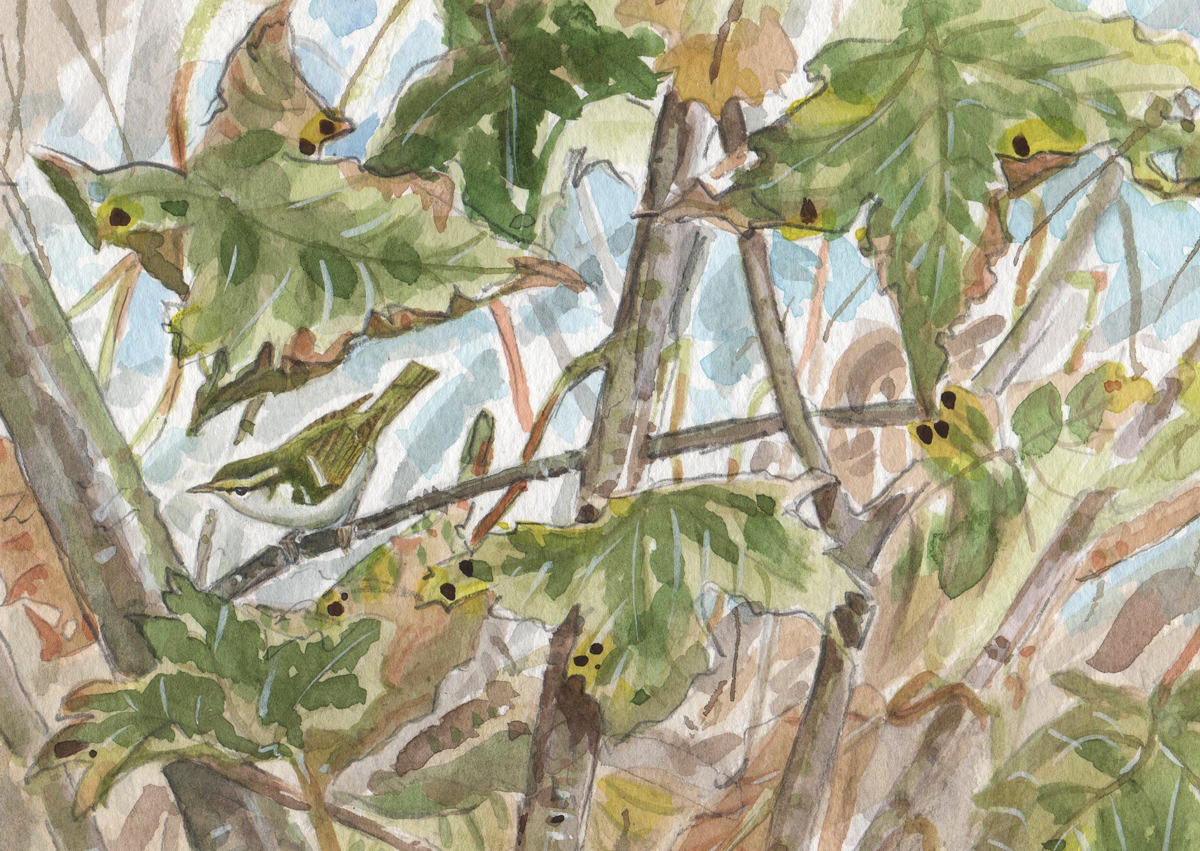 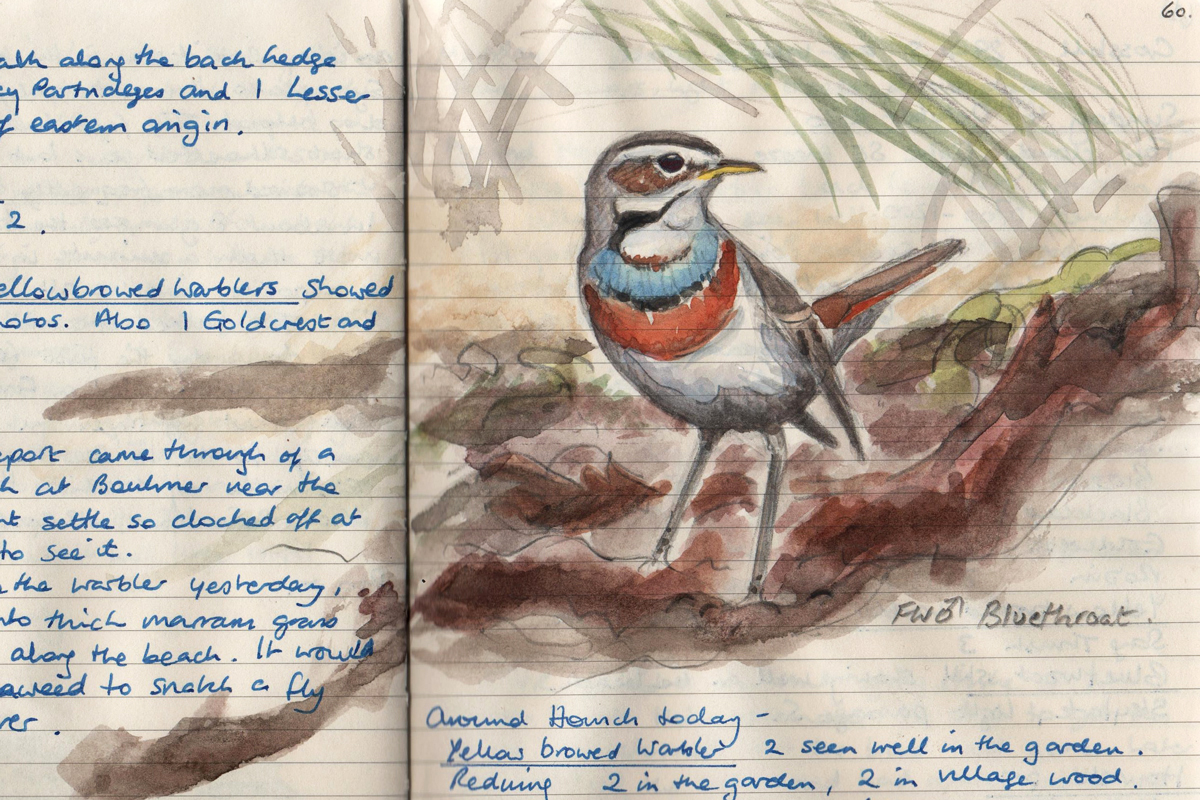 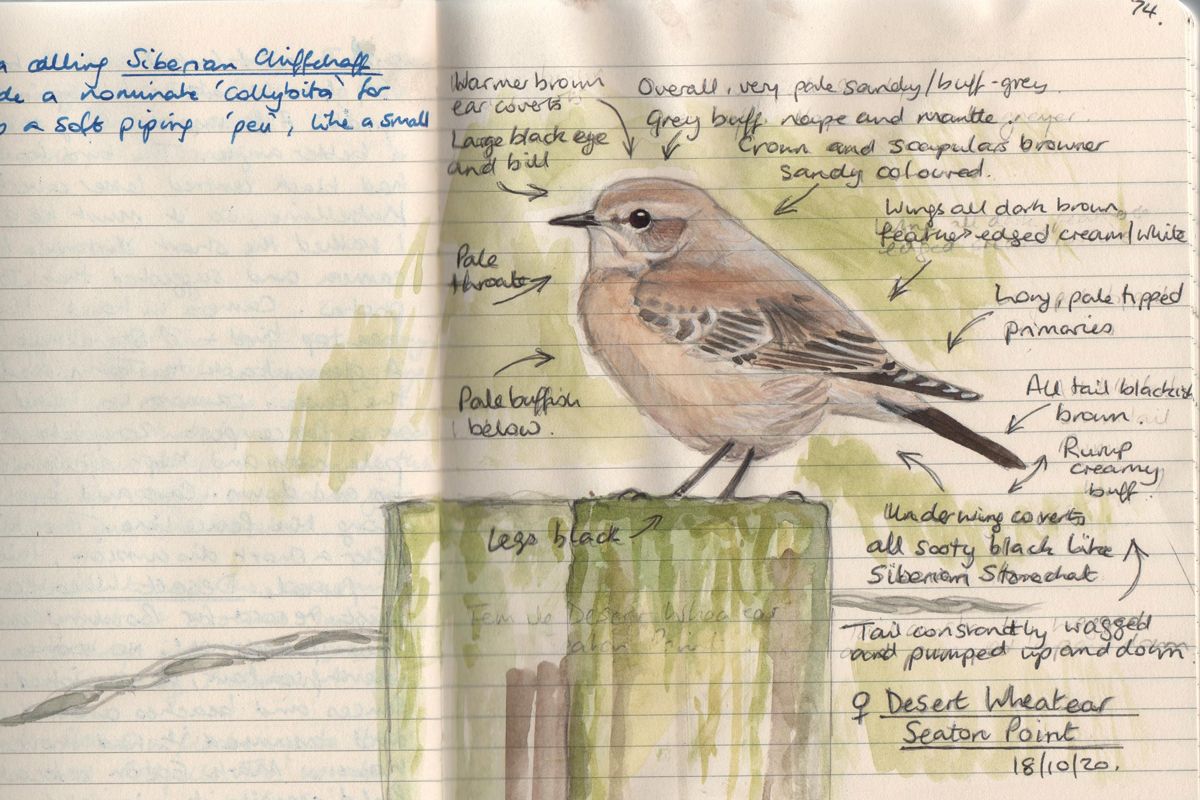 Surely that's autumn done with? No, on 11th a Dusky Warbler was at Boulmer and on 19th a Buff-bellied Pipit was my last of 4 UK lifers and 6 Northumberland ticks this year. 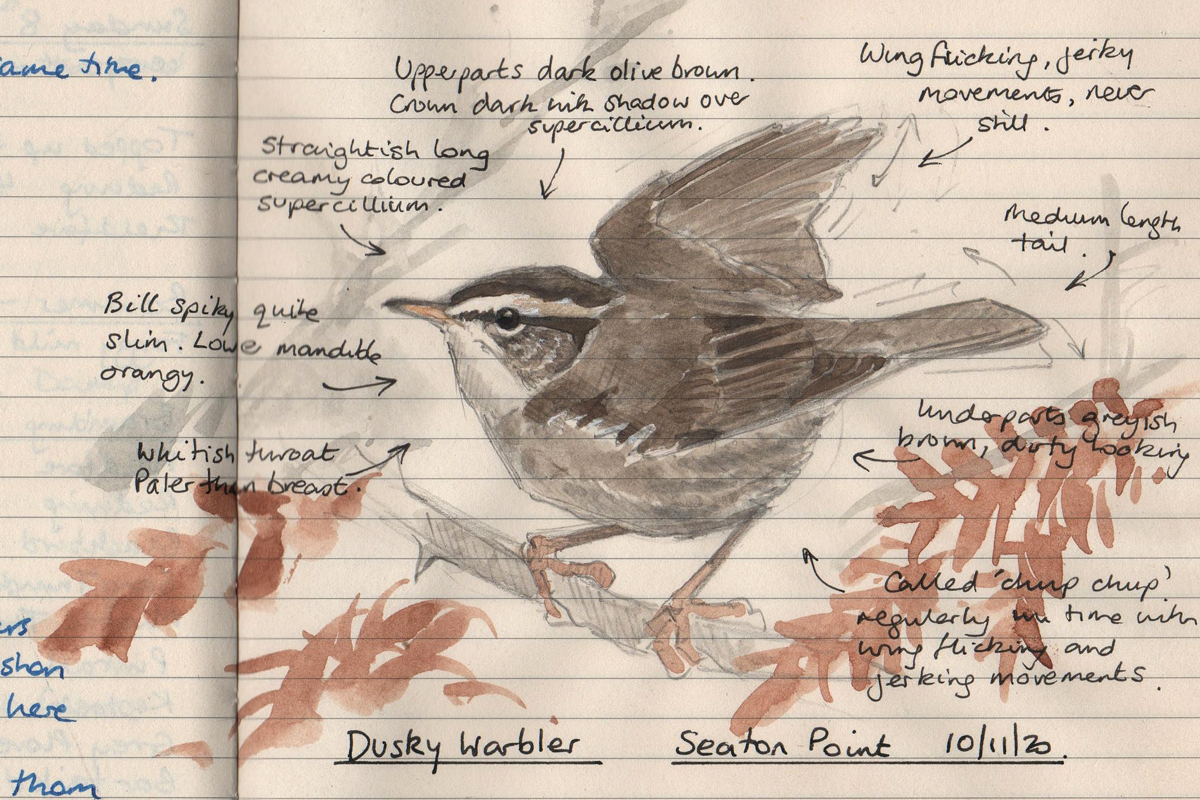 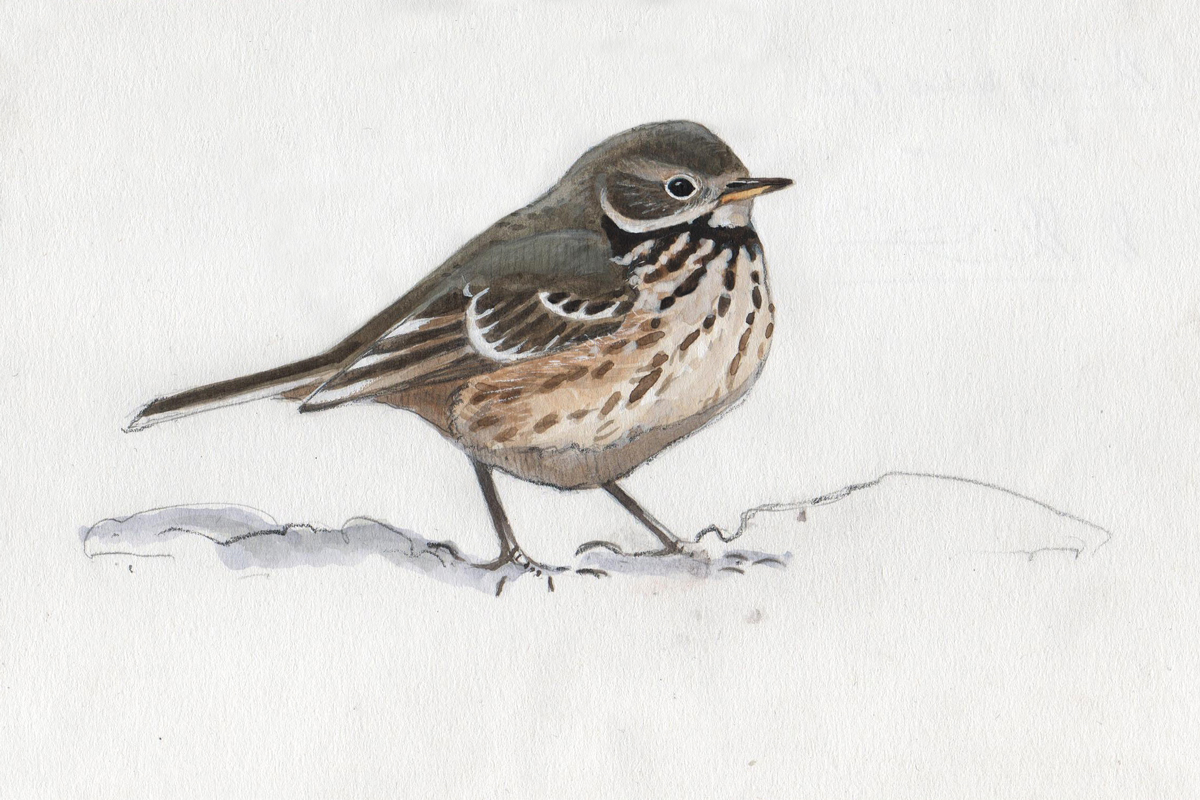 A final flurry with a  nice Grey Phalarope on the sea off Cullernose on the 5th. 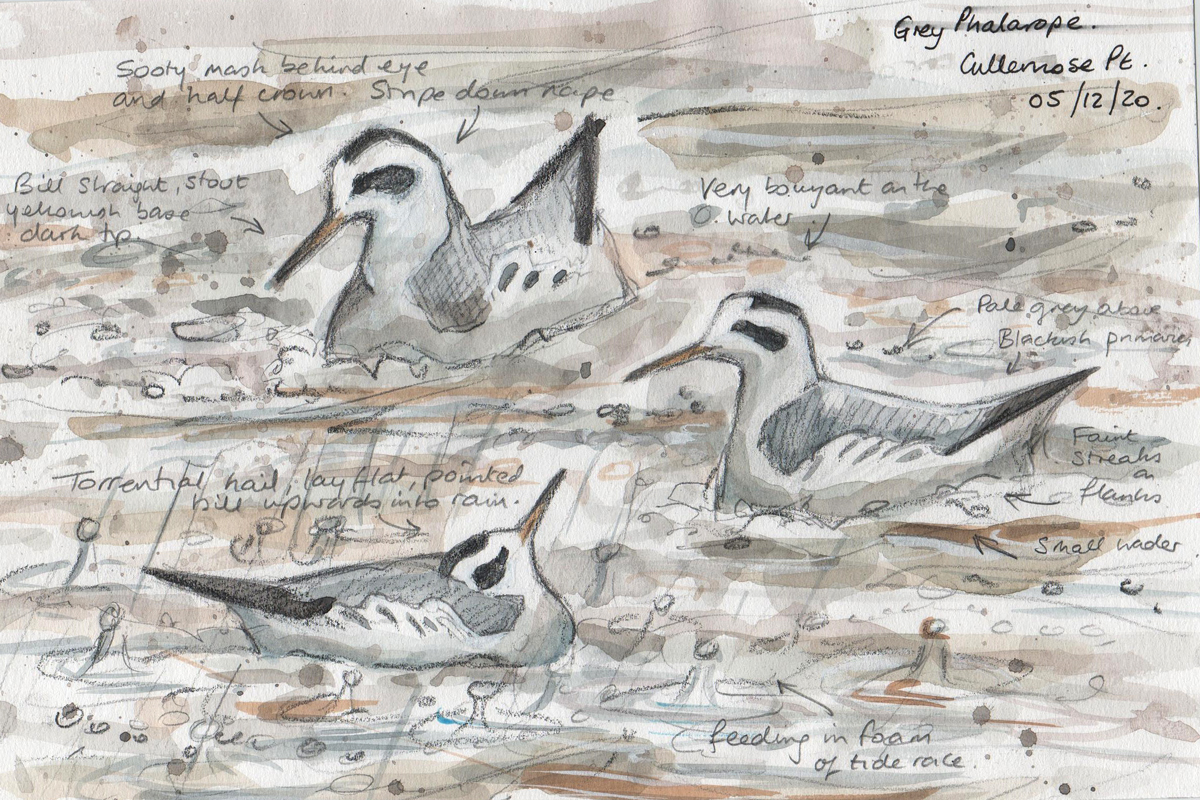 This ended an amazing year for birding locally, breaking my Howick / Craster local patch year list record of 163 set in 2019 with an excellent 166 species.

Lovely stuff, Stewart. Your watercolour sketches are tremendous. 😊 And what a patch!

Cheers Gav, yes it might not be to some tastes with no proper ponds or scrapes or hides but it provides enough interest for me...