Despite the seemingly adverse weather conditions for migrants, I have done alright this week and seen a few interesting birds.

On Wednesday, I was amazed to see that a Bee-eater had turned up at Druridge. Likely one of our pair seen on Sunday, so at lunchtime I popped along to get a better view. Unfortunately it had gone north and did not return before I had to get back. Old school Northumberland birders have waited for ever to see Bee-eater in the county, so after 35 years, I thought I finally had a 'blocker' on my list. That lasted three days.... Still, it is good when everyone can catch up with such a precious find.

While scanning for the Bee-eater, a Water Pipit just in front of the Budge Screen made the trip a worthwhile one.

On Thursday there was a short deviation in the long term westerlies we have been suffering with a short SE breeze. Immediately large numbers of thrushes were arriving. At home, Redwings, Blackbirds, Brambling and a nice sat-out Woodcock started proceedings before work. At lunchtime I had a walk along the disused railway lines at Cambois. The highlight here was a male Ring Ouzel, a belated year tick, with 150+ Redwings, 20+ Blckbirds, 50+ Song Thrushes and 6 Bullfinch.

I called in to Druridge again on Friday before work. The Bee-eater was still in residence, this time watched briefly say on a barbed wire fence preening before making off towards Chevington again. A distant Swallow will probably be my last, a Little Egret flew south. I returned at lunchtime but missed the Bee-eater again ( its giving me the run around this bird) where the best on offer was a nice Little Owl perched on a chimney at the farm.

Later on Friday, Gary Woodburn found a Little Bunting on his patch at Low Newton. He sent some tempting photos of this tiny emberiza so Saturday morning found me loitering along the path to Newton Point hoping to catch up with only my second Little Bunt after one on Holy Island in the mid 90s. I have dipped a few since.

At first things didnt look promising with a seemingly birdless tree and too much cover to hide a small brown streaky bird but Gary soon refound it and called us over. What performer too. This lethargic bunting slowly clambered around its chosen sycamore gleaning aphids from the leaves. It often sat motionless for several minutes making it tricky to find but in all, half an hours viewing in good sunshine was enough and the bird just evaporated into cover.

Two close Yellow-browed Warblers together padded things out abit, plus Brambling, Chiffchaff, Blackcap and Mealy Redpoll added to the variety. 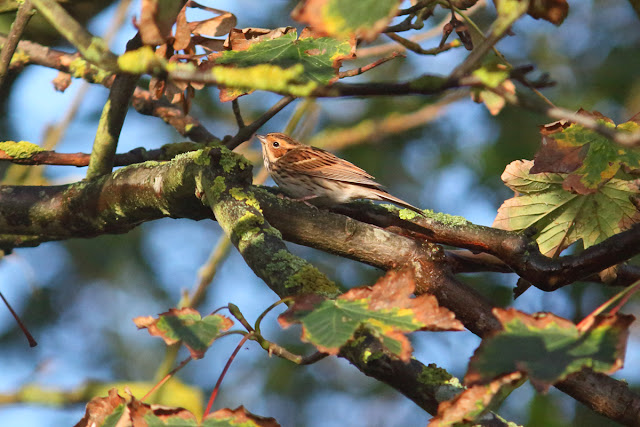 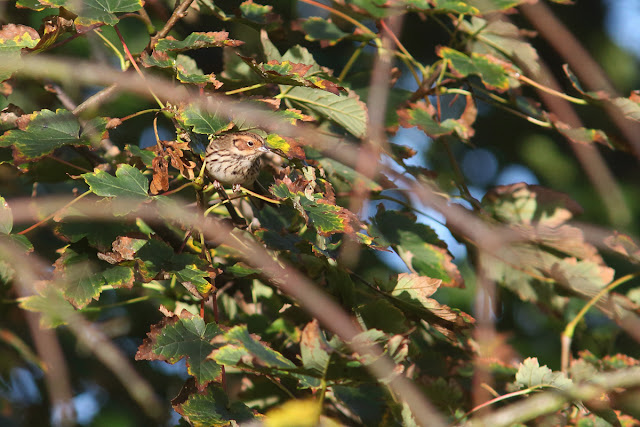 Sunday dawned in a different fashion with Storm Brian having just passed over through the night leaving us with a gusty NW wind that was quite chilling. Not great prospects for John seeing the Little Bunting. I thought it might still be there, but did not expect to find it in this wind.

Luckily John had other ideas and the first bird he looked at was the bunting. In the early morning light it skulked amongst the same sycamore branched for a few minutes then we lost it. A further two and a half hours passed before it appeared in the open from nowhere. This time it showed even better than yesterday picking tiny aphids off the leaves, and for one great moment it shared a binocular view witha lovely Yellow-browed Warbler! I am tempted to say 'stunning'.

While scanning for the bunting I had a heart stopper when for all of a millisecond, bright grass green apparition with white wing bars appeared in my bins that could only have been a firecrest but its head was obscured by leaves and I did not see it again.  Frustrating.

We ended the morning with a glance at the sea off Football hole where the only birds of note were 3 Red throated Divers and John had a Woodcock in-off.

Not too shabby a week on the westerlies.... 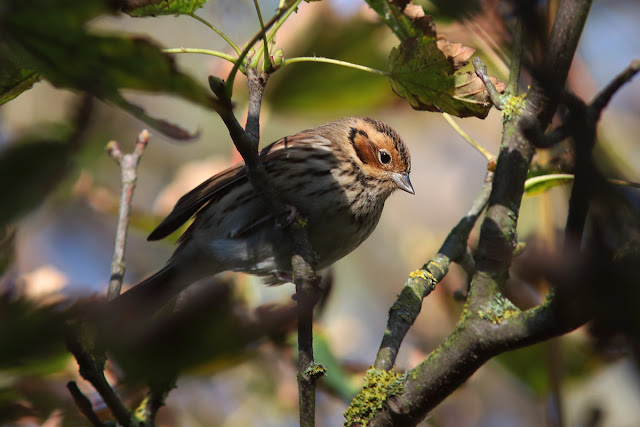 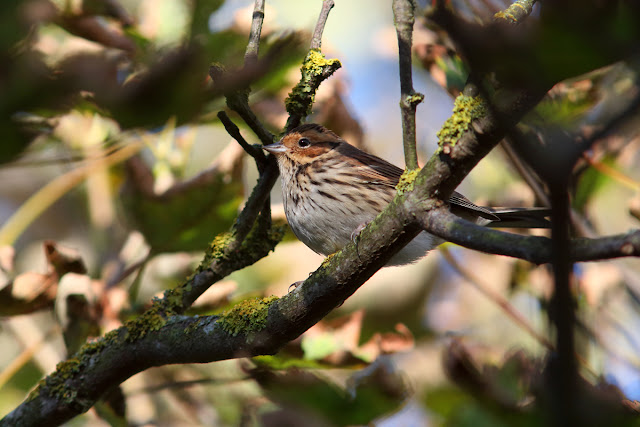 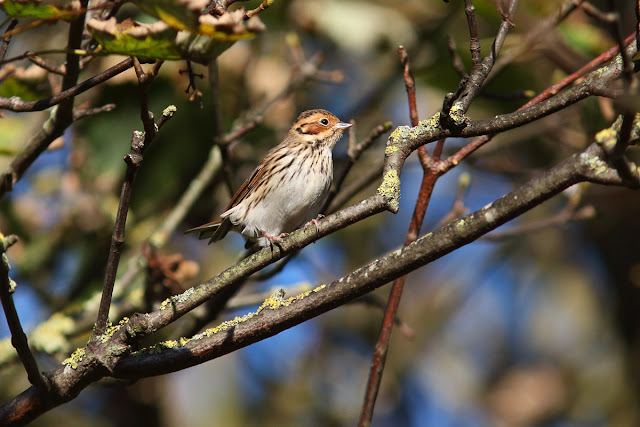 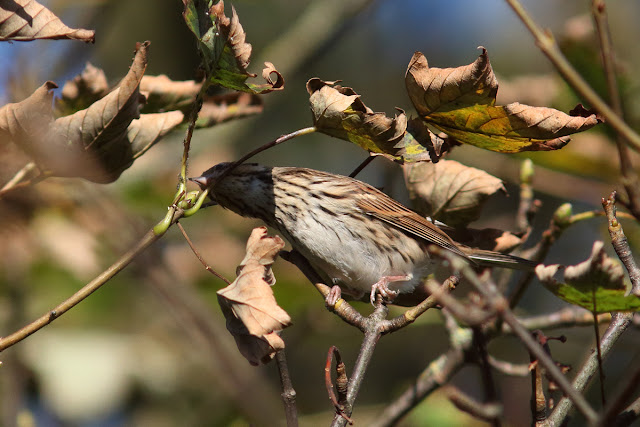