The day began at first light with a Brambling calling next to our garden, the first here this year.

I met up with John and went down to Cresswell to look for the Garganey that have been around for a couple of days. We didnt see them, but we did see 10 cars of  'toggers waiting patiently for the most photographed Barn Owl in Europe....

Next stop was the bird filled Budge fields at Druridge. The Great White Egret seems to have departed, so I'm pleased to have seen it last week. Amongst a field guide plate full of wildfowl on offer were 2 Pintail and 2 Pochard, but it was the resident Great crested Grebes that stole the show. Two and a half pairs were involved in some handbags at dawn out on the mirror calm pool. 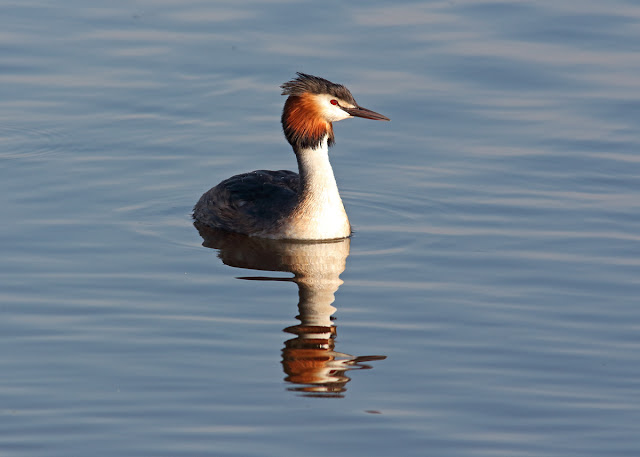 In the distance a Sedge Warbler could be heard singing, my earliest ever. Or is it. Read on...

Also here was an injured Russian White fronted Goose grazing with Greylags. A Green veined White was new for the year too.

We made our way along to East Chevington for a tea stop overlooking the pools.  Marsh Harrier could be seen occasionally while the air was filled with the songs of Willow Warbler and Chiffchaff. After a while a reeling Grasshopper Warbler could just be made out, so we had a walk to investigate and maybe get a photo.

Well, this is why I will not be year ticking my earliest Sedgie just yet...

As we wandered closer to the Grasshopper Warbler, the song got louder until, there, on the small footbridge, was a great view of our songster.... a Shiny Shoed DJ wielding an ipod of British bird songs! I wonder how many times this bloke has to be chastised to get into his nugget that tape luring birds in the breeding season for a year tick is just plain bad form? Why not just wait a week or two when they will be singing all along the dunes? Its beyond me. But now, whilst I may have had an early Sedge Warbler, I cant very well have it, in case it was this tosser with his sound machine! Twat. Thanks for that!

As the migration picks up apace this week, Yellow Wags and real Groppers might be seen...

I've never seen a tufted duck being that expressive!