With John away for the weekend, I got up early and just went for a wander around the home patch. The seawatching seems to have come to an end for this weather system anyway. This morning the bright sun dazzled the seawatch off, so another short session this afternoon confirmed that birds were few and far between. That's not strictly true, there were still thousands of Gannets and Kittiwakes, but the more interesting species were in short supply. In 30 mins I had 4 Manx Shearwaters, 1 Sooty Shearwater and, suprisingly over a nice blue sea, a close in female Velvet Scoter.

Viz Mig showed there to be some light land movement going on with Meadow Pipits, Goldfinches and a Grey Wagtail all going south.

Around the garden, the local insect population was doing its very best to get us inside, as millions of black fly ( aphids), flying ants and wasps were a proper nuisance. A good tip to stop wasps being a hazard at this time of year is to  lay out a slice of jam and bread not too far from where you are sitting. This attracts the stripey critters away from your own food and keeps them occupied for the whole day. 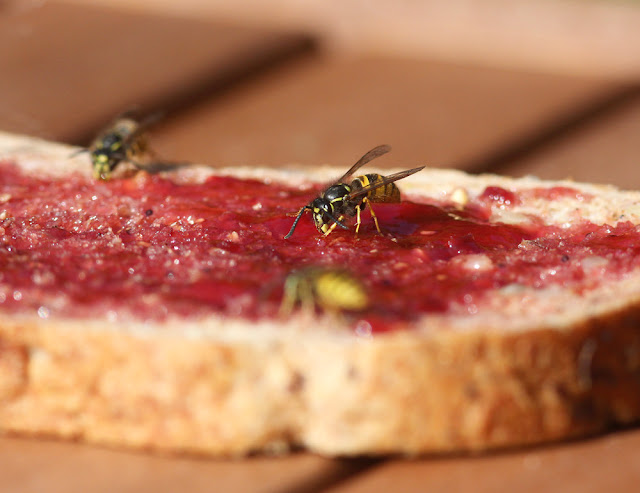 Down at the village hall pond a few Common Darters were on territory with a pair in cop and egg laying. A good sign.

Just to diversify a little more, we rescued a young female Hedgehog yesterday. After a night with us on a hot water bottle, to help it get over hypothermia, she was delivered in a bit better condition to the Hedgehog Rescue Centre at Longframlington this morning.

What with the wind swinging around east again this coming week, there might even be some birding to be had....
Posted by Stewart at 7:44 pm