This weekend has seen a real mish mash of weather and with it some very dodgy weather forecasting too. Overall we have had strong easterly winds, two spells of overnight torrential rain and a couple of very nice warm, humid days. Not bad, a real hint of summer...

Beginning on Friday evening, a short seawatch from Craster was largely uneventful, but there was one highlight, a distant Bonxie, low over the waves flew south, followed later by second even more distant individual, but I might just wait for a better view of one before I add it to the patch year list ( cool or what). Other wise, 9 Swallows S, 1 Whimbrel S, 3 Common Gulls S, 20+ Turnstones on rocks, and a Goosander on the sea.

No birding on Saturday, but a light easterly had started to make things a bit interesting. A few 'hooweets' and 'tacks' came from deep in cover around the garden. Overnight there was lashing rain and a light SE wind making hopes high for the morning...

On Sunday I was out early and wandering Craster by 6.30am. I was surprised how quiet it was, but still believed that there would be some bird interest, somewhere. All I had here were lots of hirundines, a scattering of phylloscs and a few Blackcap and Whitethroat. I left them to it and drove south to meet John at Warkworth for 8am.

All areas were covered with the following highlights noted - 1+Whinchat and 1 Wheatear were down the dunes, 5+ Little Egrets up Old Water, where we heard convincing tales of up to 15 being present plus a Bittern yesterday. We gave the reed bed a short stake out but the boomer remained hidden.

Down on the proper mud flats there were masses of waders, 126+ Curlew, 1 Black tailed Godwit, 73+ Knot, 56 Golden Plover, 61+ Ringed Plover, sev hundred Dunlin, 1 Sanderling, 2 Turnstone,   150+ Redshank, 260+ Lapwing and a Common Sandpiper was heard. Not bad for a small estuary.

I left John  and headed home at lunchtime joking that the now increasing breeze might ground something around Howick for me. 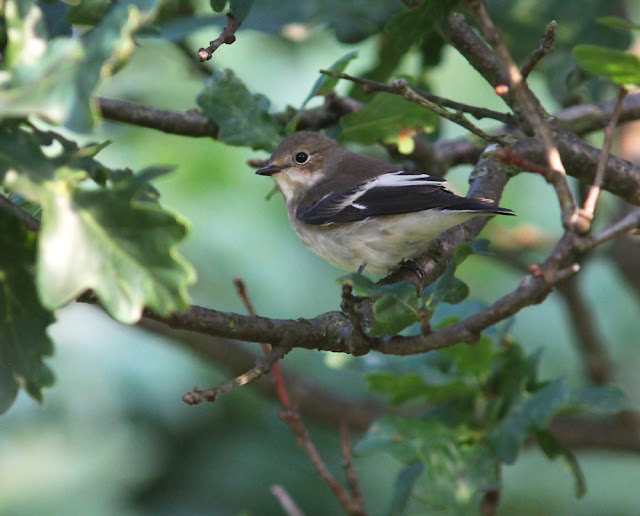 Not much happened until late afternoon, when a flickering wing in the small oak next to our shed caught my eye. Peering through the greenery I could see a small bird lifting one wing and waving it in the air - a Pied Flycatcher! An excellent garden tick and a good bird for the patch list too. While trying to get some photos, one bird was quite showy at eye level while a second individual was flycatching higher in the sycamores. Two birds! Pied Fly isnt annual on my patch, its presence being wholly reliant on an easterly weather pattern between mid August and mid September, so I was well excited by these two.

On Monday, I was up for work at 6.15am to find a North Northumberland speciality at work, or not - a power cut. Unable to get ready for work or even have a coffee, I did the only decent thing, rang in a days leave and went birding.

The morning was calm, warm and clear. Up at Craster, 8 Whitethroats, 1 Lesser Whitethroat, 4 Blackcap, 6+ Chiffchaff, 2 Siskins S, 3 Grey Wagtails N were all I could winkle out.
Back home to photograph a rare moth taken from our bedroom wall last night, an Annulet. This is my second from only 4 records since 1976 in the county. It must have been blown into our house from the sea cliffs on that strong easterly.

A bit of luck does sometimes help when birding and today it gave me two patch ticks in a short time, the first was while photographing the moth, a distinctive call revealed a Green Sandpiper flying over the back field from the small ditch, later a Greenshank, 'pew pew pew'-ed as it flew south along the coast. Both excellent birds for this area.

Around the garden the south east breze and warm weather had brought more butterflies to the garden buddleias - 3 Painted Lady, 1 Red Admiral, 5 Small Tortoiseshell, 3 Peacock, 1 Wall ( 6 were on the coast path), Large Whites and Small Whites in goo numbers.

As the evening came, I took a stroll up the hedge to see if the Green Sand was still around or to try and find a shrike or something. No rarities or waders, but two Whinchats were nice to get in a rough area of marshy ground. A good finish to the weekend for me...

What a wonderful face the painted lady has!