This afternoon I decided to brave the throngs of Robson Green disciples and head off down to Craster to see if I can add Common Tern to my flagging patch list.

I sat for a while in the sun overlooking a nice blue calm sea. A few Sandwich Terns, Fulmars and Kittiwakes loitered about while a Gannet or two passed by on their way back to Bass Rock.
The tide was full, making the long skeer off the harbour into an island. On here, a Whimbrel called briefly as it jostled for space with a few Oystercatchers, then a Common Sandpiper fluttered across the channel onto the the rock. Patch year tick No 1. As the waves lapped, a smaller bird appeared with the Eiders. A Goosander redhead. We get a few moulting birds in the area at this time, so this was Patch year tick No2.

As I casually scanned about wondering if the seawatching would be any good this year, a gull roosting on the rock caught my attention. An odd colour that, I thought, and went to get the scope from the boot. As suspected, it was a first summer Glaucous Gull roosting in the sun!  Not exactly what you want to be seeing in July, but its a full on patch tick, year tick No3 in half an hour, so it would be churlish to complain. Get on the list. 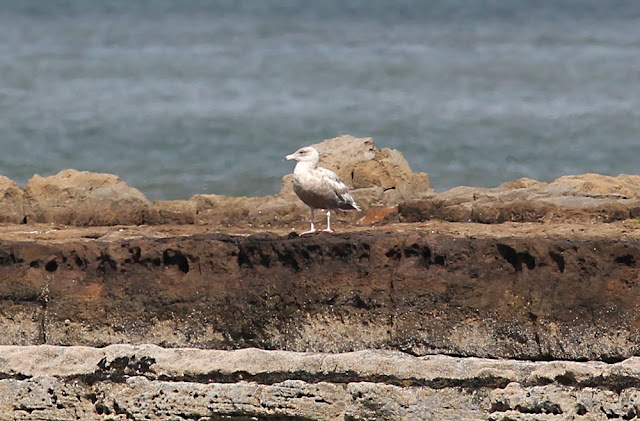 They sort of cancel out my Crossbill and Greylag Goose of last week... there's still all to play for!

How many are you on now Steve? I'm on exactly 90% now, so need to get my finger out really. All I had in June was Swift, then nothing until these three. Now passage is underway I should pick up odds and ends.

95, so that's 95% I believe that your autumn will be more profitable than mine! But it's fun Stewart, so let's get out there and see what happens!

Definitely. August is often a good month here. There are loads of possibilities that I may or may not get during the month - Med Gull, Skuas, Sooty, Merlin, Hobby ( rare), if winds turn east - Whinchat, Spot Fly. Still need likely stuff such as Dunlin, Ringed Plover, Ruff, Black t Godwit, Common tern. Nothing is nailed on here, not having standing water or other birders to inspire really slows it down!