Its all down hill..

A day of two halves today. Out birding with John this morning under heavy rain filled skies, seeing very little then out to Craster this afternoon in much sunnier conditions.

But first, one of the years highlights for me, came not by staking out a mining subsidence pond in the Northumberland coalfields, no, but just by having a five minute sit in the garden.

I remembered at about 6pm last night that this weekend is Garden Bioblitz time, so armed with a bottle of 'Sol' and a notebook, we took a wander around our acreage. Now, its not the hanging gardens of Babylon so the said stroll took no more than half an hour in total. During that time 83 species were recorded! Mainly plants, but also birds, insects and moths from the trap.

However, a little mystery appeared to be struggling amongst our non-native bluebells. It was a Bumblebee with a  huge rusty red rear end and a yellow stripe at the front of the thorax.

I could see it has too much red to be red tailed so the field guide was brought into play. This didn't really help either, as this patterning just didn't fit for any likely garden species of bumbler. I consulted with John this morning and after some 'chimping' on the phone during a particularly heavy shower, he suggested Bombus monticola, the Mountain Bumblebee? The habitat in my garden isn't right, we are right on the coast not up a mountain. But see here...

So this evening I have consulted some experts on Social Media ( no, real ones!). Ryan Clarke on Twitter said monticola and called me lucky, while on FB the Bees, Wasps and Ants Recording Soc said exactly the same! Everyone concurs so it must be right.

So if I can get Mountian Bumblebee here, can I have Wallcreeper next please?

Right, back to today.

Highlight of our intermittent forays away from the car and flask this morning was a nice patch of Early Purple Orchid in the dunes at Warkworth. With 100+ spikes it was a pity they were all but over. I'll try earlier next year...

This afternoon I fancied my luck seawatching at Craster to try and end May with a flurry, and what a good decision that was. An hour or so gazing east had only a few birds but 4 of them were patch year ticks. 3 Little Tern, 2 Arctic Tern,  1 Roseate Tern and 8 Sanderling were all appreciated. In particular the Little Terns and Sanderling both not annual here...

Nearby the Craster rock edge was a vision in blue with loads of Spring Squill in flower. This is a rare plant in Northumberland, and it favours right down to the rock edges on the whin sill rock. Very nice... 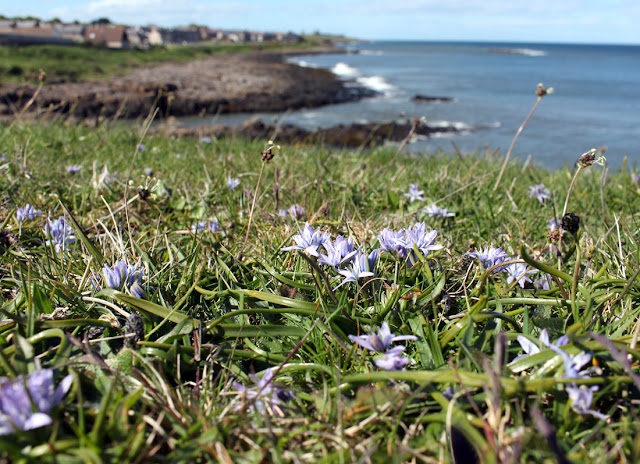 What a lovey day of finds, my Bioblitz rather low this year, the bumblebee is a lovely colour.
Amanda xx

I'll have to look closer at the bees in my garden Stew. The Early purple orchids have gone from the Stosbwood area; there was a small colony in a corner of Grangewood but the ground is now covered in Ivy and I haven't seen them for about 4 years. There are still a few at Ulgham though and plenty inland particularly places like Greenleighton quarry speaking of which a wintering Wallcreeper may spend some time in Howick Quarry!

That bee is a real good'un Stewart. Most envious!

Nice post Stewart and what a great bee find too.

Wonderful bee Stewart and great photo - well done :) - a rather special garden "tick". My garden bioblitz was down a bit this year compared to last but I did better than expected.

Amanda - I saw you had wall speedwell. I found Thyme leaved Speedwell, new to me growing in a plant pot holdinga hawthorn tree that is three years old...

Nige - Bees are new to me Nigel and they are very tricky to id, but they make for a nice photo...

Steve - Yes, I went hunting for them last June in the Cheviots but neednt have bothered...

Caroline - I could have added more if I had taken my time instead of racing around for the
hour. Maybe next year...

Hi Stewart, hope you are enjoying the weather.. do us a favour have a look at my blog "30 days birds and bees" can you tell me if this bird is a young Raven ? thanks..
Amanda xx