I suppose that there will be more photos of this morning's solar eclipse than there are of wheatears on the blogosphere today. Not to be out done, here is another. We got up to clear blue skies this morning though a few clouds soon began to show, making us a bit anxious that we would never see the partial eclipse. We need not have worried and the morning remained very pleasant with 75% clear skies with some thin, steadily moving clouds.

This is my second eclipse after the one in 1999 and I cant wait for my next in 2026. I heard on the BBC today that there have only been 8 solar eclipses visible in the UK in the last 500 years, so to have been fortunate enough to be around for two of them is a privilege indeed.

While waiting for the 09.35 Armageddon, a check of last nights moth trap catch was a nice surprise - 24 moths of 9 species including the second garden ( and 12th Northumberland ) record of Acleris cristana, though this one was of the form cristalana. 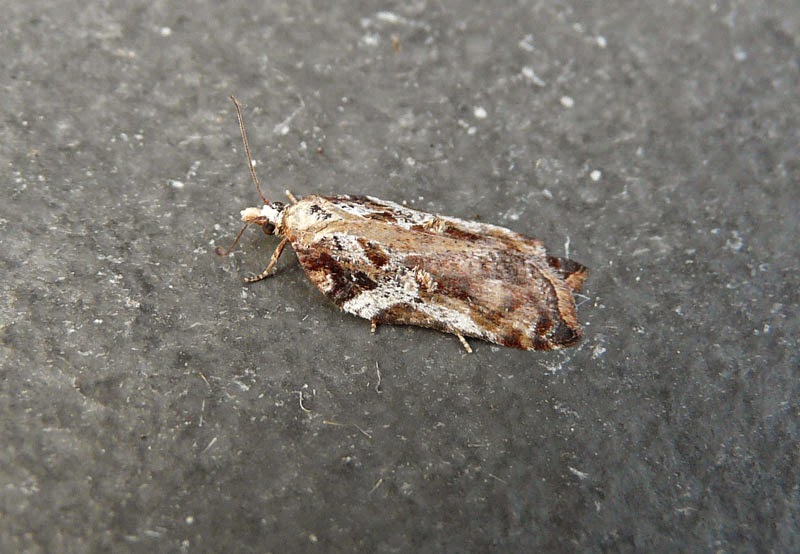 Nice shots Stewart....If you don't want to wait until 2026 for the next near total eclipse, save up your pennies and go to the USA in 2017.
This one should be spectacular and truly total. It will be seen right across the U.S. from Oregon to South Carolina, the maximum duration (2min40sec) in Kentucky.
http://www.timeanddate.com/eclipse/solar/2017-august-21

Plenty of white-arses, not so many eclipses!

Trent - I saw that on Twitter! Pity as I am hoping to have a first trip stateside next year if all comes to plan...

Nice shot Stewart, we were stood on the beach at Beadnell, the light was very strange. Turned out to be a lovely day as we walked to Seahouses, managed to see a few birds I have not seen before. Have posted what I saw on Thursday so far.
Amanda xx
PS Great moth recording as well.