It just gets better!

I took Bunty northwards up the coast path this morning in glorious sunshine. Intending to get a fly by Lap Bunt I was strolling quietly, listening for that distinctive call, when a bird flew from a wild rose, along the path towards me. I knew instantly it was one of two species - Wryneck or Barred Warbler on size alone, but it was silhouetted in the morning sun. Luckily it pitched into  blackthorn right next to me and stopped to look around. A Barred Warbler! And a show-er too. It clambered around in the sloe berries quite unconcerned giving great views. It had that typical vacant look about it with a sluggish demeanor so I thought I would go back for the camera.

By the time I got back it had reverted to type and was hiding. This is my best two...oh dear... 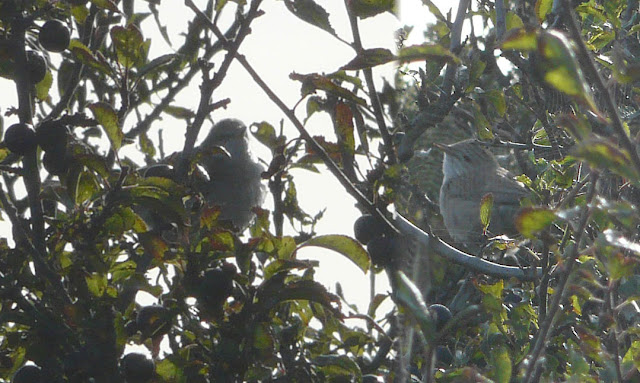 Such a shame as it had been performing like a star earlier... 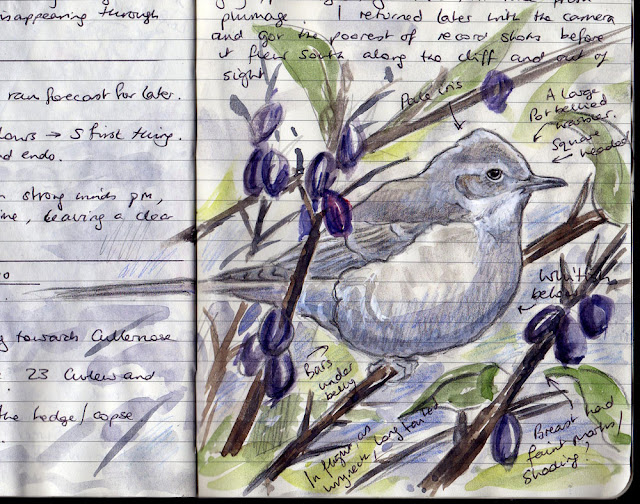 Still I'm not complaining about the crap pics, Barred on the patch is still a tremendous bird and the highlight of  a great week.

Also seen today, 9 Swallows S, 2 Whinchats, 5 Wheatear on the path near the teepee, 49 Lapwing and 23 Curlew in the back field.

On a sour note, at the exact spot where I saw the Grey Squirrel the other day, a Red was a road kill this afternoon...

Only 8 moths of 7 species. Sky was crystal clear and full of stars. Temp 6 degrees. 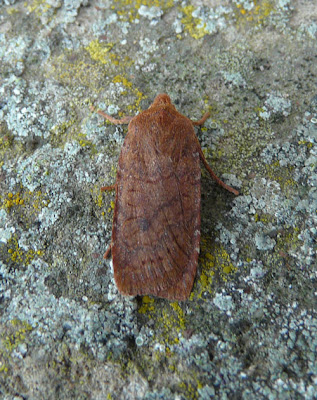 Chestnut
Posted by Stewart at 8:13 pm

Is that a spiders web obsuring the second barred pic, or a manky thumb print on your lens? Stacks of skylarks over Druridge and Seahouses today

Barreds have that "don`t mess with me" eye look about them, don`t they Stewart ?

I wish i could find a Barred on my patch. It's hard work on the west side!

Nice one Stewart, I was thinking along the lines of Ipin with that thumb print :-)

Hi all, that IS a spiders web in my photo. Bugger Doh!

FB - Its hard work here, make no mistake ! Odd good days make up for it all though.