From Balkans to Baltic...

After a morning out on the Alnwick moors with JWR all we had to show was a multitude of Crossbills including several post breeding flocks (yes, already!) and a pair of Ravens.

When I got home, Ian Fisher sent me a text to say that there was a male Black headed Wagtail at Cresswell Pond. After missing last years bird on Holy Island, I decided to have the half hour drive south... 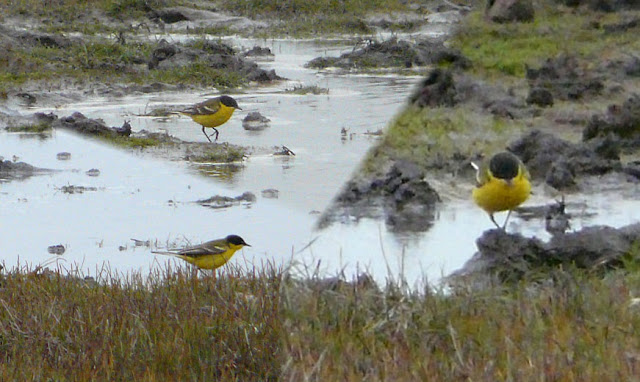 The bird was still present in the increasing rain, and showing very well indeed alongside 6 Yellow Wagtails and a White Wagtail for company. What this bird must be feeling in a cold NE4 with rain when it should be in Yugoslavia, Greece or Turkey we can only guess, indeed the last time I saw this race of Yellow Wagtail was in central Turkey feeding along the roadsides over 10 years ago.

This is only the third Northumberland record and the first to be really twitchable. A really cracking bird too!

Around the patch, two new species turned up - a pair of Gadwall on the pond and the first Willow Warblers about a week late.  7 Crossbills flew E over Village Wood while 3 Redpolls flew N ( a one and a two). The Green Woodpecker was finally seen at the Lane End briefly.

Moth trapping last night didnt produce any new species but it was another century...

Total 105 moths of 9 species. And that was after releasing Friday nights catch into the woods a good way off to prevent duplication / retrapping.

Just seven moths 'in/at' Base Camp's trap this morning (one was one the wall a yard away, how do you get so many?

Davo - I have no idea how I get so many. One trap on my gable end in the garden. A rural spot though with only 4 of those orange street lights might help? I wonder what July will be like!!

It was a cracking bird indeed! We're not having much success with our moth trap - 9 Hebrew Characters last night,which is good, the rest of the week it's been four! Ms Fairclough is whinging about my street being no good for moths, your posts are not helping matters!

Cracking little bird, pitty I was away or I may of popped over to see it
Michelle