Last nights Garden Moth Survey catch was my best of the year so far, a very respectable 56 moths of 11 species.

The weather was mild 8 degrees, overcast, looking like rain with a light SW3. 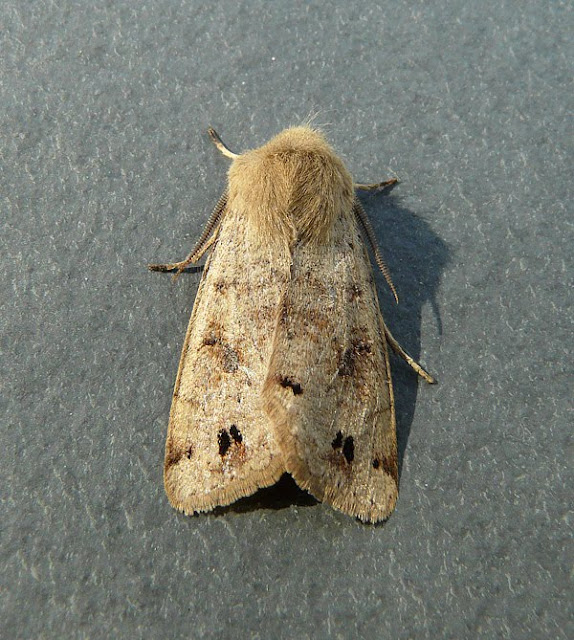 Above - Twin spotted Quaker.
2189 Twin spotted Quaker 1 new for me and the garden. I thought I was too far north for these so its a
very welcome addition. PS I have just heard that this is a first for VC68, North Northumberland!
2190 Hebrew Character 13
2256 Satellite 1 (white spotted)

This morning was bright and clear but much cooler with a blustery NW wind.

At 9am I was going out with Bunts and noticed a 2nd summer Mediterranean Gull flying around the back field with a couple of Black headeds. It was in full summer plumage but with black in the wing tips. After only a few minutes it flew off SE over the village and wasnt seen again. A nice one ofr the garden list!

"672 Parsnip Moth 1 new for the garden but believe me, not worth a photo!"

Well done on another first for the VC and a cracking photo of it, too.
Keep that trap going. There must be plenty more firsts to put your name to.

Hi Stewart,I also had my first adult Twin-spotted Quaker this week after 6 years of mothing.Mind you I don't count anything "to light", that's way too easy, it takes all the challenge out of it ;-)

Like the blog layout by the way, very easy on the eye.

Dean - I hope so. The way species are expanding and moving ranges who knows what I could get...

Charlie - What a star! I love owt like that. I was inspired by Roy Levertons 'Enjoying Moths' and he encourages looking for species using field craft and not just relying on the trap. but it is very seductive seeing all these new things in your own garden with the chance of adding to local distributions etc. I'll add a link to your blog, and hopefully I'll get some tips for going on the hunt for moths this summer without the help of a light.

Cheers Stewart.One the great things about using field craft is that you can undertake it 12 months of the year - there is no season. Moths and butterflies are ever present in one stage of their life cycle or another.Of Course finding time to search for them is another matter :-)