Spent the morning down at Boulmer. It was cold at first very dull with a breezy SE 5 blowing. It became milder later.

The area had that dull and boring, quiet feel today. A day where you just knew nothing would turn up.

One of the first birds seen though was a patch tick, a Greylag on the rocks in front of the pub. It was some size too, you couldn't eat a whole one...further along the shore to the south, waders were gathered wating as the tide receded. In a very loose count there were 19+ Sanderling, 56+ Dunlin, 10+ Bar tailed Godwit and 4+ Grey Plover as well as plenty of Redshank and Oystercatcher. A single Shelduck flew south over the haven.

Up in the village, 35+ Tree Sparrows loitered around the turnips. A stop at the golfcourse layby to sketch a Pheasant or two ( oh yes, it can be that bad) when the bird of the morning appeared. A large Peregrine carrying small prey, a starling possibly, flew south over the road to the golfcourse. 23 Golden Plovers and 7 Grey Partridges were in the fields.

I thought I better do some walking, so lapped Seaton Point for 70+ Linnets, 3 Pied Wagtail, 1 Kestrel, 1 Mistle Thrush and a Stonechat. 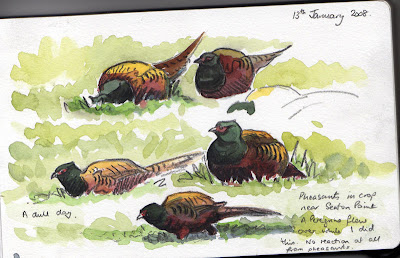 A taste of things to come came first thing this morning at home when a Song Thrush was singing his heart out in our garden.
Posted by Stewart at 6:46 pm

nice one with the greylag,funny how such mundane birds can be great on a patch.

Have you even thought of publishing your field notes and drawings, they're wonderfull

DP - I suppose thats why we plug at it. The hint of a patch oddity stands out like a sore thumb when you watch the same place regularly. I get a buzz when spring arrives and I might get a a Leser Whitethroat or something. Who knows a Redstart might be on the cards this year..

BR - Thanks. I have had the odd thing published ( Where to watch birds in Northumberland, Birds of Lindisfarne, Magazines like BB, Bird Watching etc) but I am only an occasional artist. I will be trying to become more regular this year ( so to speak)...