Back in September 1993 the late Andy Booth found Northumberland's first Gadfly Petrel off Hauxley. In 1996 it was accepted by BBRC as a Soft-plumaged Petrel of the race 'feae' or Fea's Petrel. Back then this was a mythical sighting, a once in a lifetime event never to be repeated. If we fast forward to the present day, how things have changed.

It is usually understood that these Fea's or to give them a proper term Fea's/Zino's/Destertas Petrels are actually rare but annual visitors to UK waters. The difficulty in identifying them at a seawatch has resulted in a lot of controversy over what can and what can't be ticked by birders so they are usually referred to as Fea's Petrels and are, quite rightly, very much sought after. To see one, you must either do a lot of hours seawatching or have some excellent communications in place so when one is reported coming your way along the coast you can get out to head it off.

Yesterday a Fea's type Petrel flew north at Flamborough Head around 9.30am. When it was seen along the coast at Long Nab, birders to the north mustered themselves, made plans to leave work early, put off pre organised plans and headed for the nearest headland.

This particular petrel was due to arrive in Northumberland at around 5pm so, having only ever seen one back in 2014  I fancied having a go for a local patch bird and was out at Cullernose Point at 5.30pm. Shortly after sitting down reports came through that it had gone past Newbiggin, 24 miles to the south and was on its way.

By now, a crowd of 7 of us had gathered expectantly on the cliff. The atmosphere was tense as we all screwed eyes into scopes and waited. A distant oil tanker was to be our spotting sight should one of us pick it up, to get others a bearing.

At 6.15pm Mark Eaton gave the 'Thar she blows' ( not literally) and there was the typical panicking until we got on it. Distant and way to the SE at first, I saw it then lost it just as quickly. The sea was flat calm so I just kept breathing and scanning and in a minute it was back on show. It came to a very reasonable 800mtrs - 1km off and we all had it in view until around 6.23pm, a duration of 7 or 8 minutes before it was lost to view.

Celebrations were made as Northumberland's 15th Gadfly was added to the record and more to the point, added to my patch list.

A short while later, back home, a scan of social media found a Tweet by Paul French of BBRC who had seen some photos taken at Newbiggin of our bird. Did it really show a breast band?

Yes it really did? When we watched it, Mark Eaton I think, commented on it. I also commented on the fully dark underwings that my last Feas did not have, it had white axilliary spikes up to the leading edge. Still, we never suspected a thing.

Then experts began saying this bird was actually a Soft Plumaged Petrel Pterodroma mollis and not Fea's at all. This was a different prospect. Soft plumaged Petrel would be a first for Britain and only the 3rd for the Western Palearctic.

So now there has been much discussion, the bird looks fine for Soft plumaged and even world experts agree on it, all from images taken by a few birders at Newbiggin. Well done lads. What a bird for the patch after July 2019's Giant Petrel and July 2020's Sooty Tern. It seems Northumberland is the place to be for a summer southern oceans seabird... 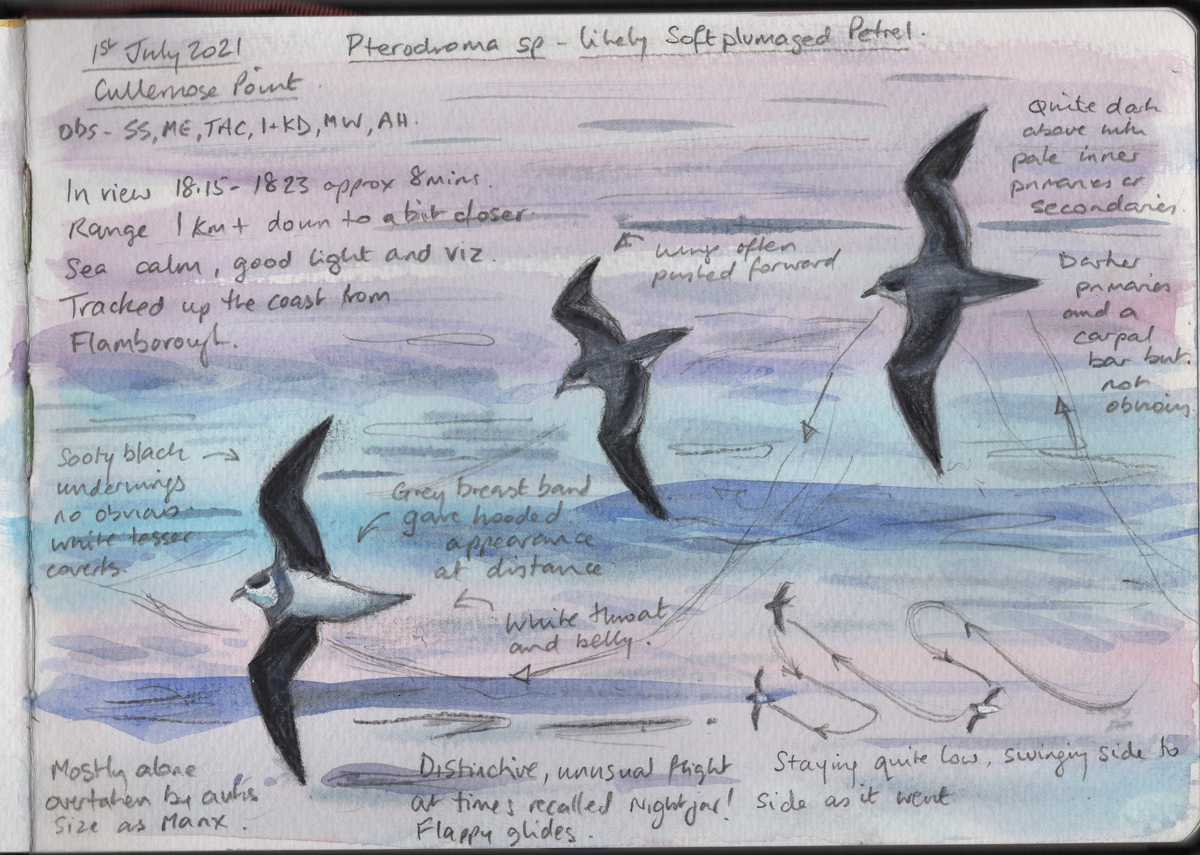 Cheers all, this past 12 months it seems we only have to wait a few weeks between megas! :)