All of birds / figures in brackets were outside of the garden boundary but seen from inside the house. The rest were in the garden. 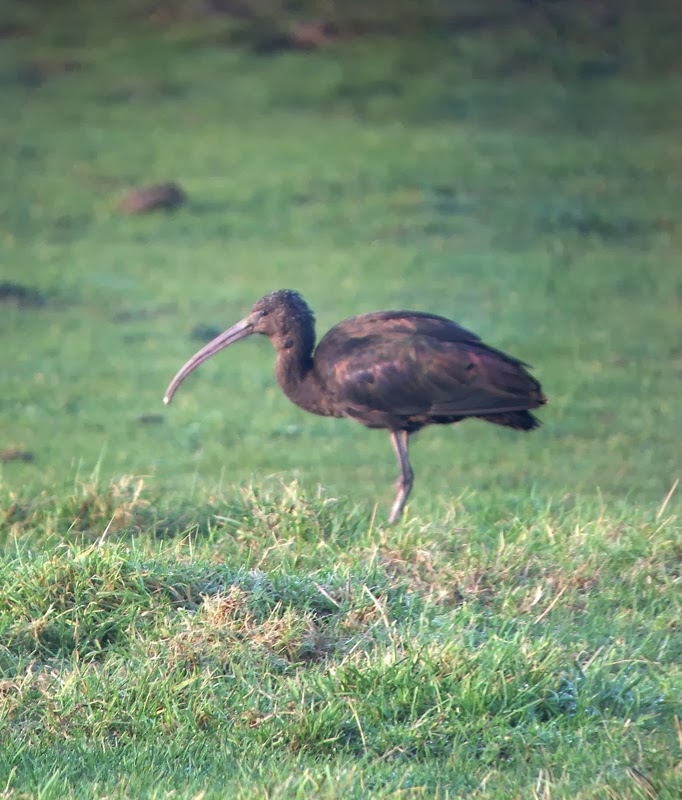 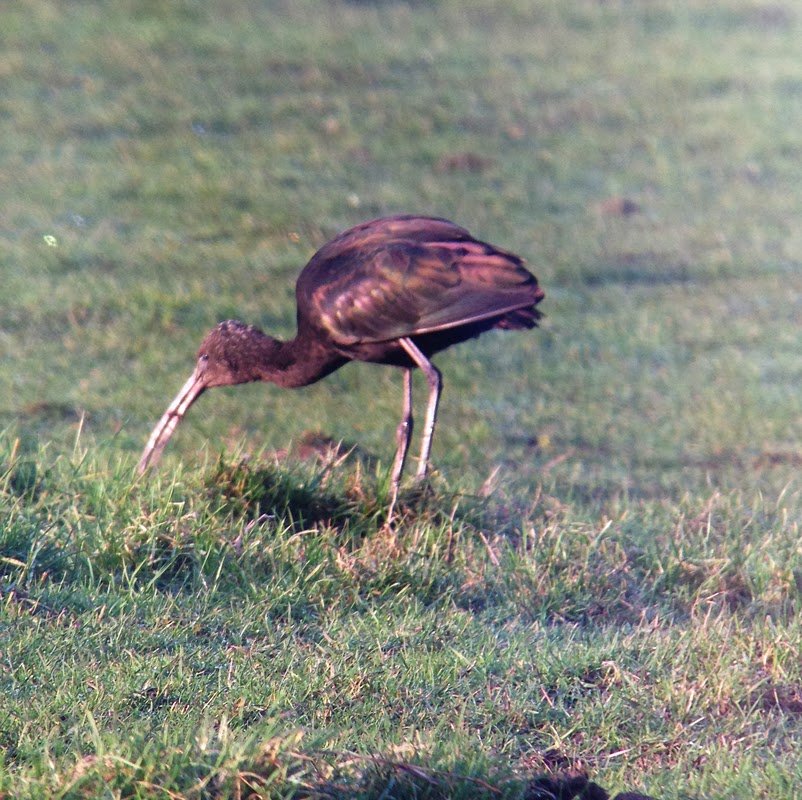 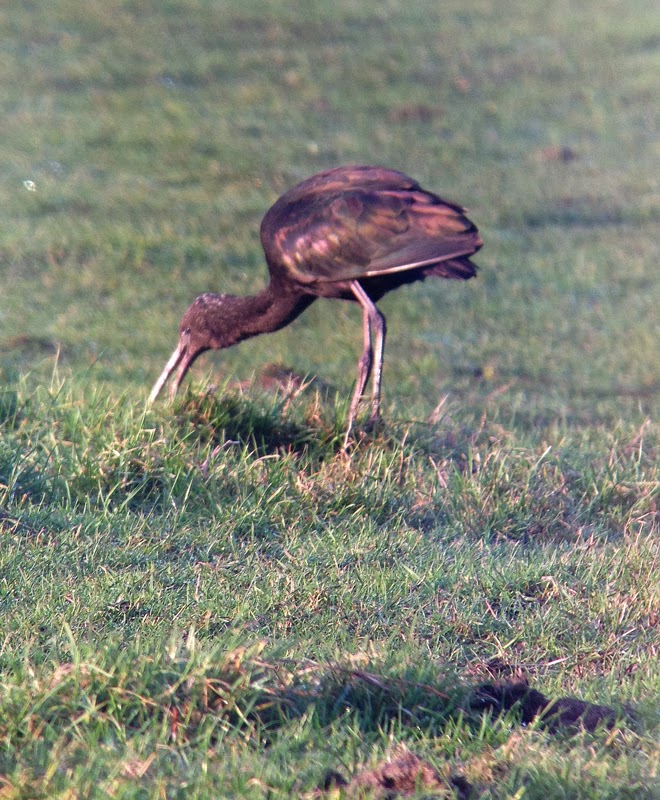 I was on my way to work this morning with never a birding thought in my head until I reached the half way point and the sun was shining. 'This would be good for the ibis' I thought, but not remembering my bins or camera, I was thinking it could be a waste of time.

As its favoured field is only 10 mins from work, I thought I'd give it a drive by. A good decision! The bird was feeding only about 30 yards from the road in bright sunshine. Time to improvise. I had my scope and my phone, so these pics will have to do courtesy of an iphone 4s hand held to my old Leica.

After a few minutes watching Glossy flew casually to the back of the field for some peace and quiet.

This is only my second Glossy Ibis in the county. It wasn't long ago that this species was a real Northumberland mega-blocker seen only by Marty Anderson at Bothal in the 80s. No doubt as their numbers continue to arrive in Britain from a burgeoning Spanish population, sightings will be more regular...

Its not often the full day is a birding right off, but yesterday was that day. Nothing went into the notebook and we sat in the car chatting for ages to see if the showers would pass. A short jaunt down to Lynemouth saw us dip the Glossy Ibis just to add insult to injury.

Well, at least I am off work today. I've been getting some camera practice on garden residents... 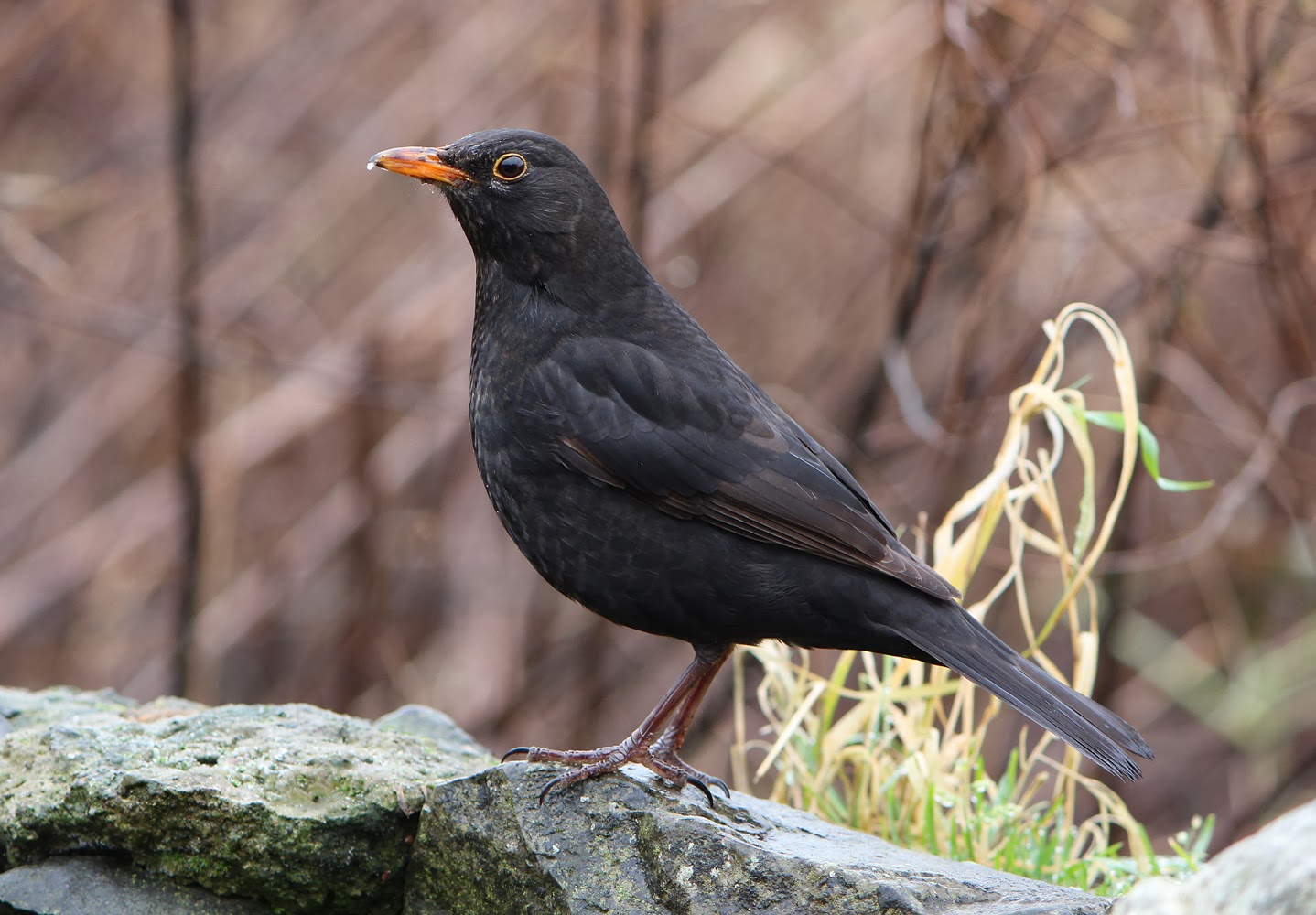 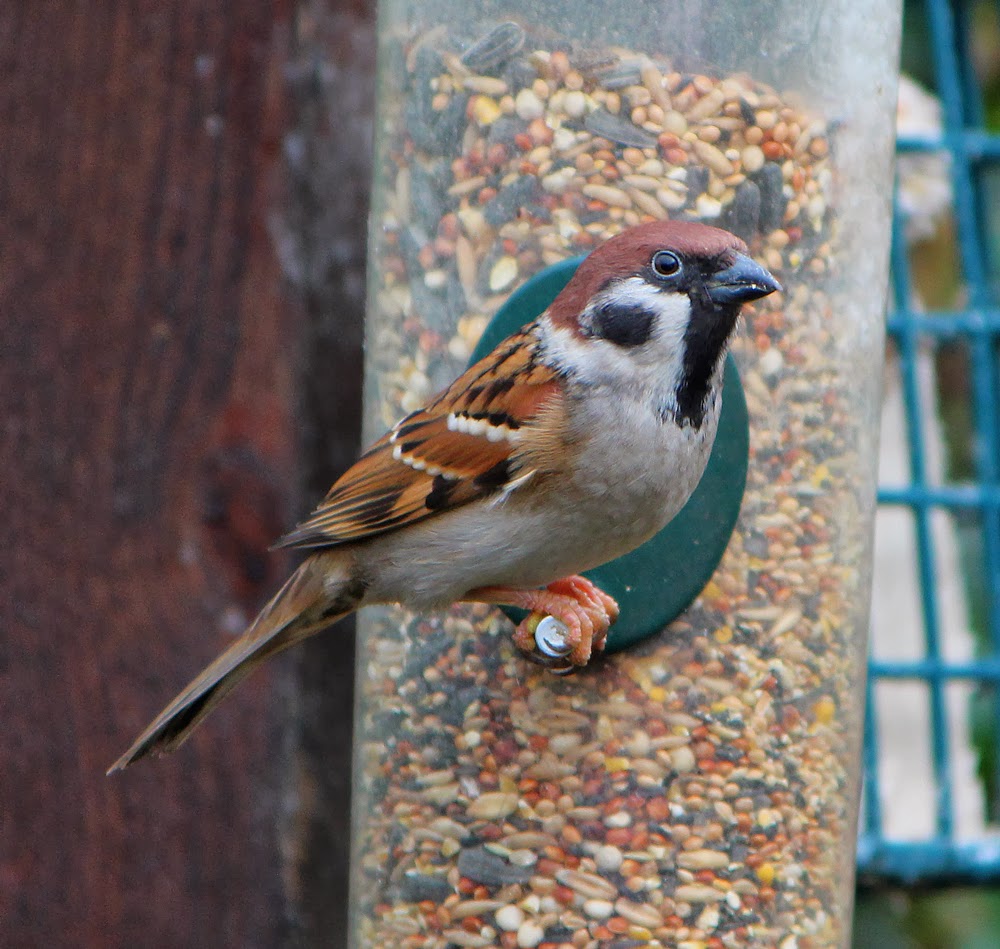 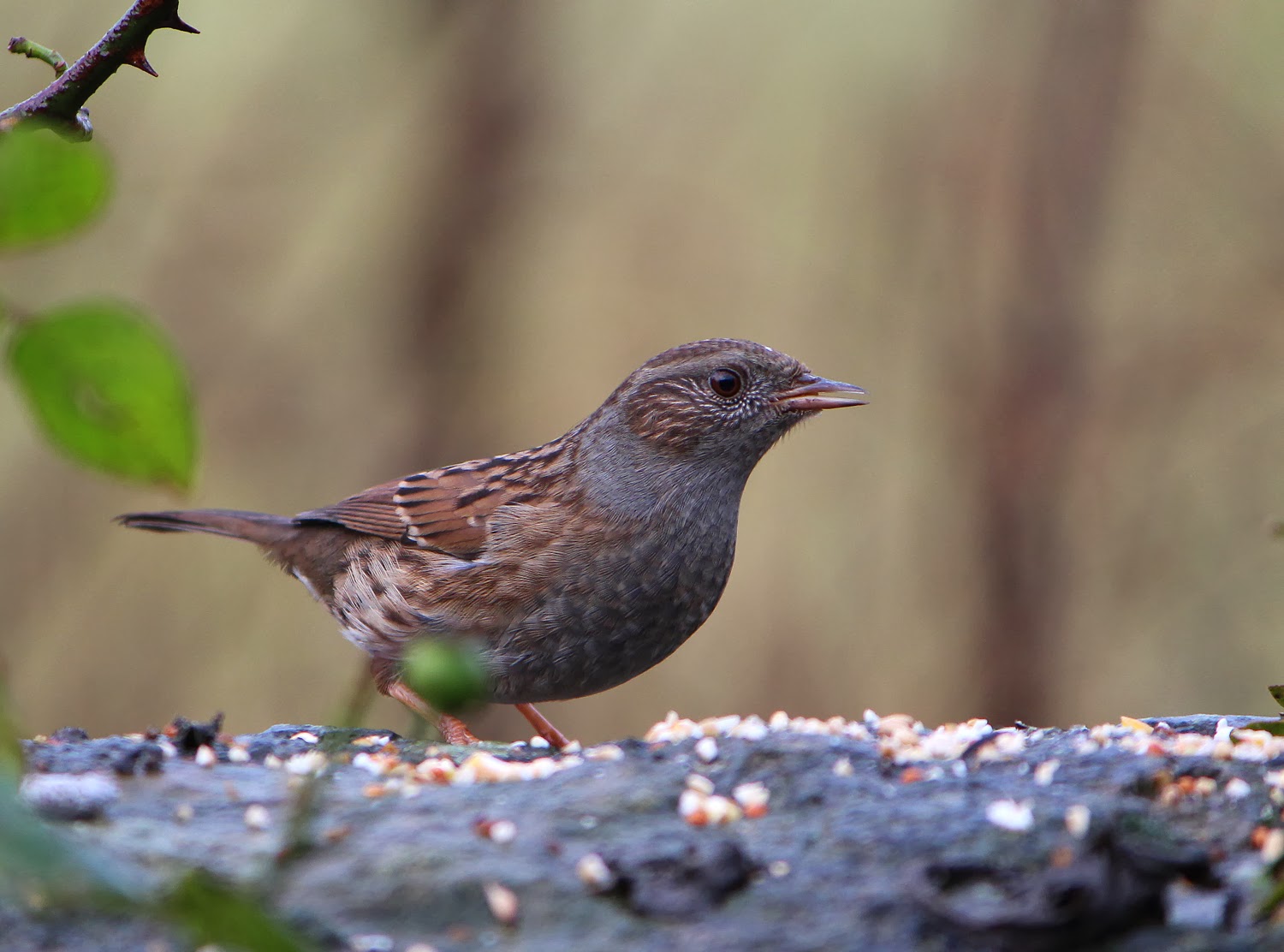 Please click on them for a better resolution. I don't think I have ever been so pleased with a Dunnock! 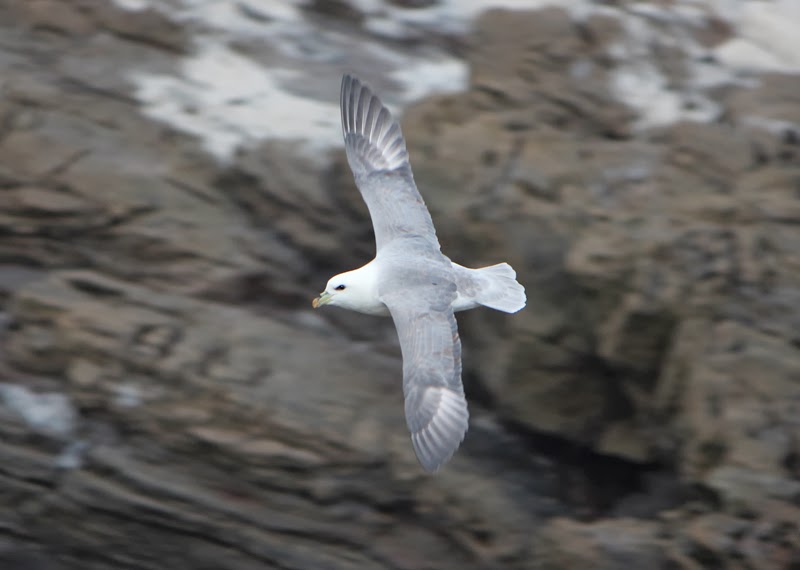 And a snatched Fulmar from the coast path this afternoon...
Posted by Stewart at 12:26 pm 11 comments:

If you frequent this blog at all, you may have already noticed that I do like it up north, but I am biased.

This is probably where I get my affinity with our northern wild vagrants too, and so far I have been very pleased ( and lucky) to catch up with Snowy Owl, Ivory and Ross's Gulls, Stellers and King Eiders, Arctic Redpolls, Snow and Lap Bunts, Bluethroats, Waxwings, Shorelarks and even Orca all on the mainland UK.
But, for the discerning observer, there is more than these pager darlings to set the pulse racing - the sub-species. Northern races of our own familiar hedgerow birds.

Since I was a kid out in the woods and fields with 'Old Geordie' we looked for and found Mealy Redpolls and I longed to see a big brutish glowing Northern Bullfinch or those white headed Long tailed Tits. The old handbook and of course my early mentor looked at these races almost as if they were good species in their own right.

Living in Northumberland I suppose we are quite well placed to catch up with these birds and since those early days I have found several big bullies, and lots of Mealy Redpolls ( 'Common Redpolls' never).

This week I hear that another of my 'most wanted' has hit the headlines. Northern Treecreeper. A lovely, frosty, classic example is at Flamborough, and what a bird. If these are being overlooked we should be ashamed. Do you look at Treecreepers? I know I do, because for years, between October and March, I've hoped that one day I might come across one with a Swedish accent in some local coastal scrub or woodland. ( our garden is ideal!)

In the late 80's DIM Wallace mentioned this form in an early edition of Bird Watching magazine, and I was inspired all over again. 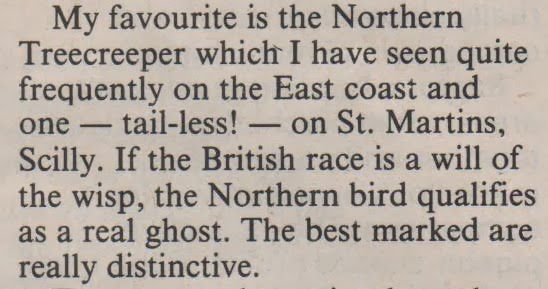 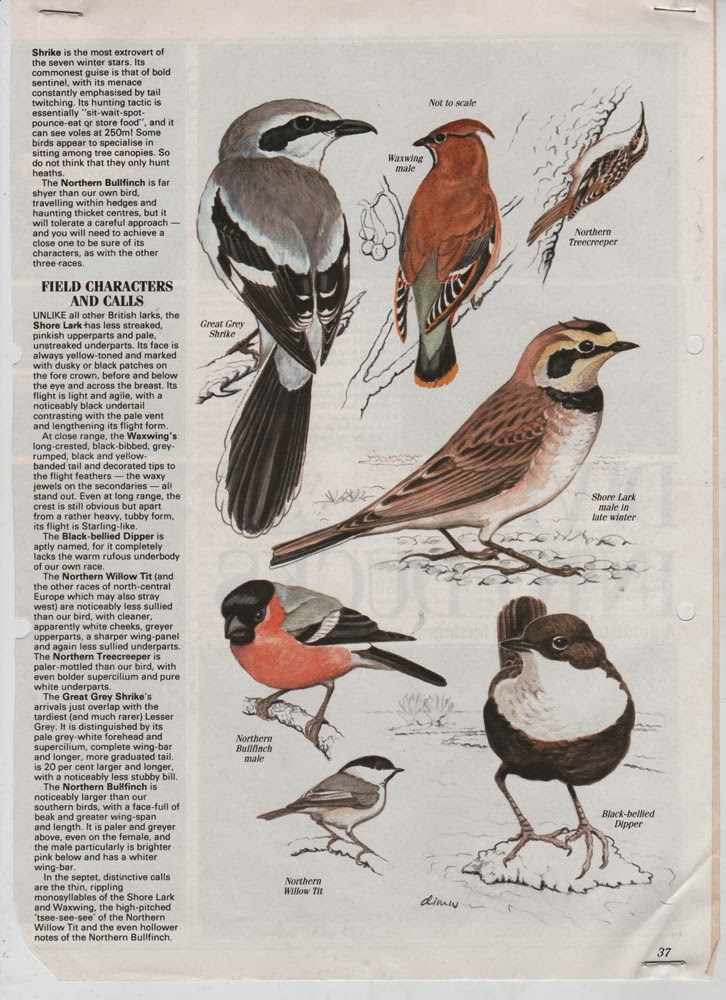 I know that Mr Wallace's ideas are not to modern tastes, but the man is very perceptive and open minded. I wonder if the Willow Tit will ever be found? One day maybe.... In the mean time, this weekend I'm going to check my local Long tailed Tit flocks, they often carry Treecreepers with them...

And who knows, maybe a snow ball Long tailed Tit too!

This morning was spent wandering around Gary's patch at Low Newton and the Long Nanny.

A thick hoar frost whitened the landscape and left a film of ice over still waters. Most of the morning was in that subdued winter grey light, brightening up for an hour later on.

Started off at Newton Pool. It was 'lifting' with wildfowl including 105+ Teal, 94+Wigeon, 30+ Mallard, and more unusual for me, proper freshwater ducks - 3 Shovelers and 2 male Gadwall. 100+ Greylags fed in the field behind the pond until a wildfowler fired off a couple, flushing everything around. 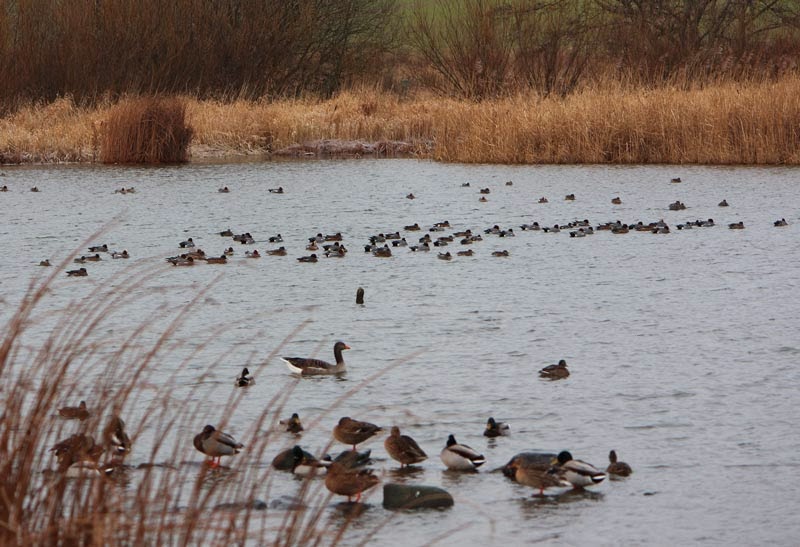 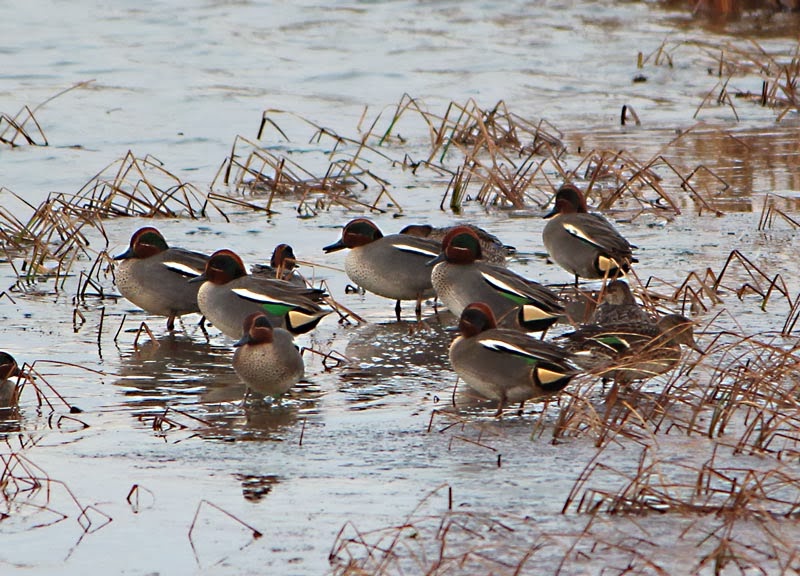 Down on the beach a few waders gathered ahead of the tide - 10 Sanderling, 5 Dunlin, 15 Oystercatcher, 5 Bar tailed Godwit, 2 Turnstone and a Rock Pipit. Back at the car thawing out blue hands, a Willow Tit was calling near the Tin Church. 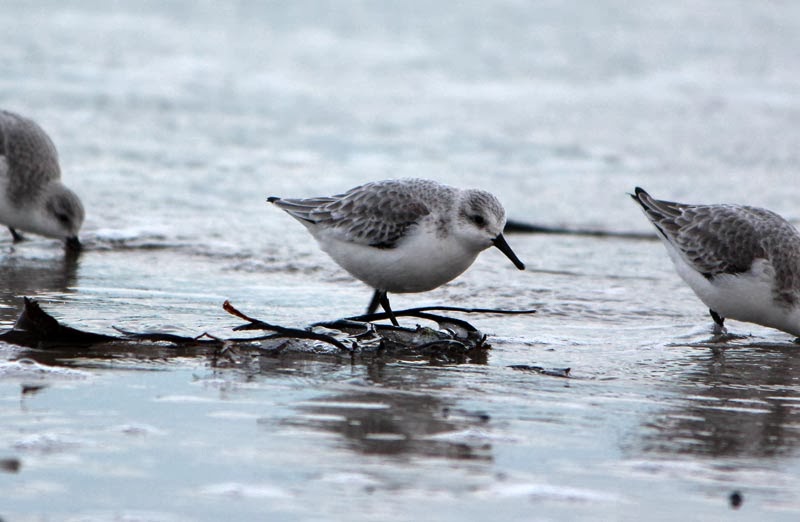 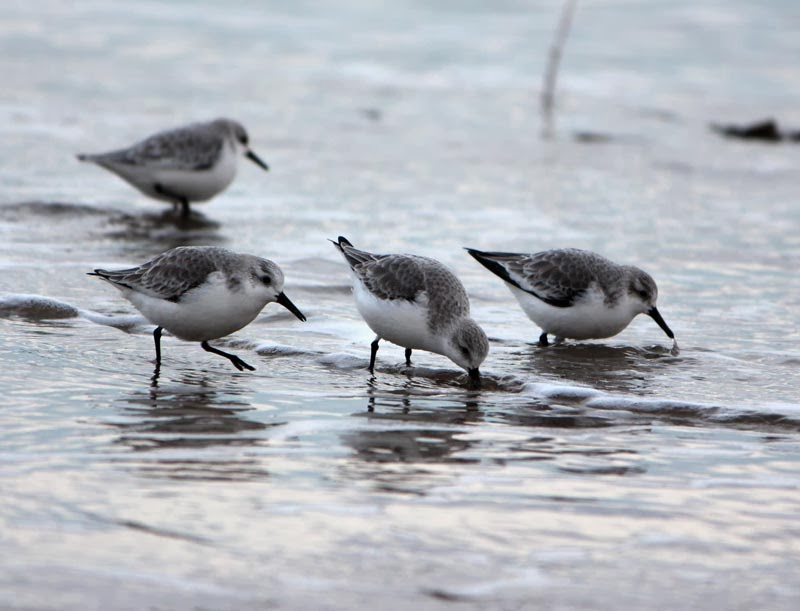 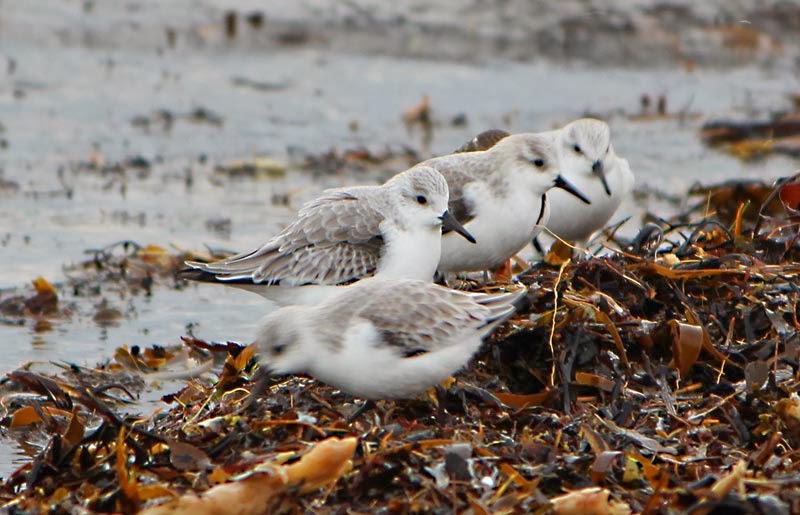 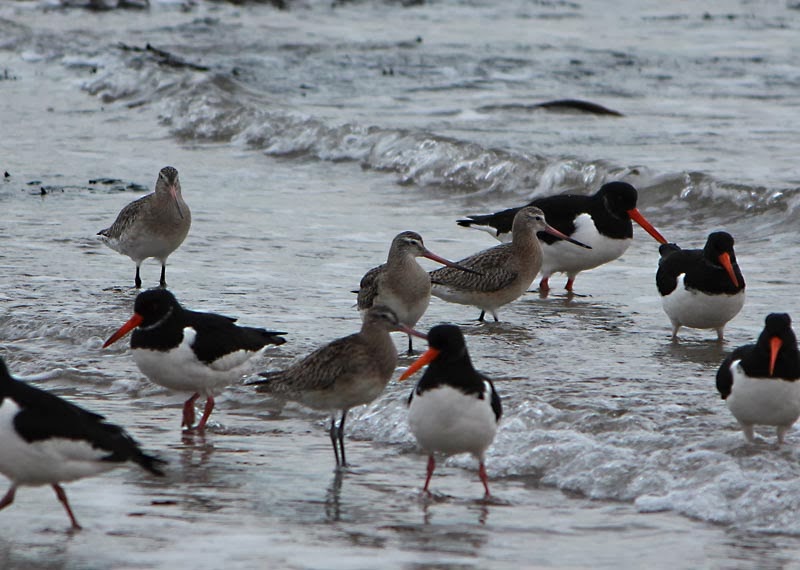 Moving the car along to Newton Links, where the car park is still free ( noteworthy in itself), I walked to the Long Nanny burn and back. An immature female Peregrine hounded a Redshank off the burn, unsuccessfully, as was I when I tried to get a photo and found I had cocked up the settings and couldnt remember what to do! Bloody novices....By the time I put that right, the bird was back on the breeding grounds....

A large gathering of Gulls on the beach didn't hold any surprises but the light was better anyway... 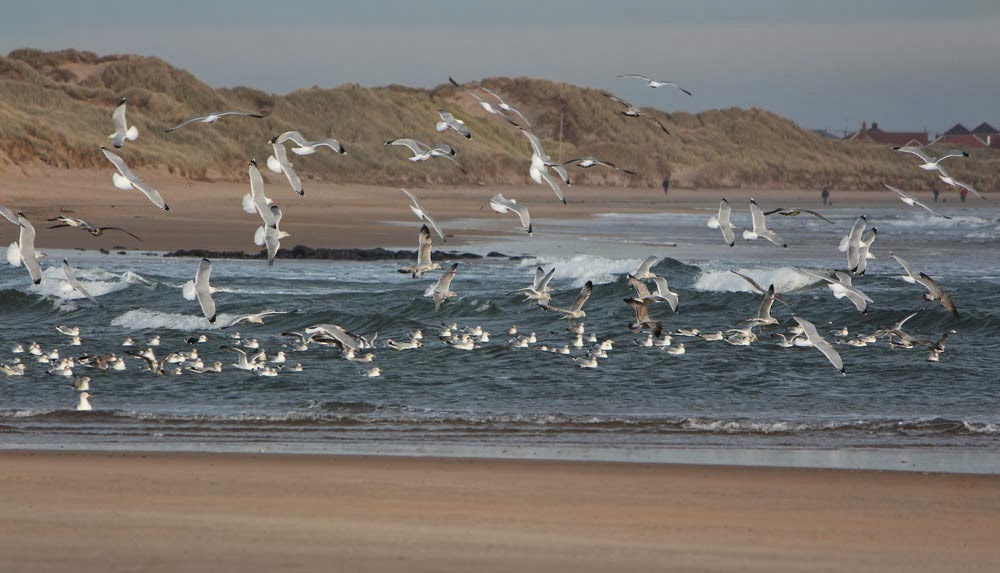 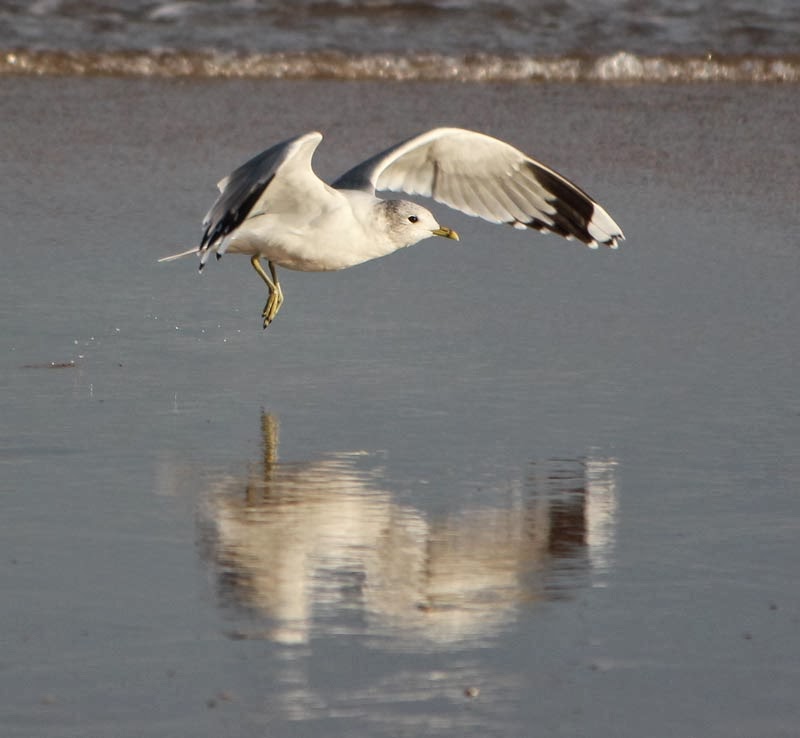 Only a short couple of walks from home with Bunty this morning. On the first one at sunrise, a female / fw type Snow Bunting ( the white in the wings was seen from below) flew low north over Seahouses farm, calling as it went. They can be tricky in the New Year here so its a good one for the patch list.

Generally the whole area was almost bird-less but a wander into the pond field mid morning added a couple more common species for the patch.

I could only find one small clump of Snowdrops in flower, making them a bit late this year. This is probably due to the mild weather, these bulbs need a sharp cold snap before a mild one to set them off. Its still like autumn here.

The Alders looked nice in the morning sun decked with catkins,and 3 Bullfinches fed on bramble and docks along the track side briefly.

Posted by Stewart at 6:56 pm No comments:

End of the holidays...

Well that's Christmas and New Year over for another 12 months. From now on we can look forward to signs of spring, but, in the mean time the regular winter wildlife fills in the day. Highlights of a non birding day yesterday were a nice hunting Merlin over our garden and a wintering Chiffchaff in our Village Wood.

I wondered about the Chiffchaffs arrival as there seemed to be a lot more local Blackbirds too. Could there be a local movement of birds or maybe even from the near continent? 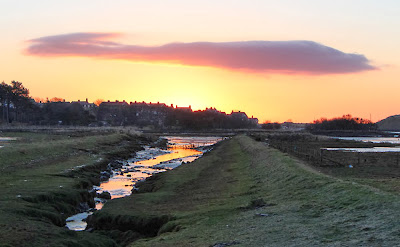 JWR and myself started today off at Alnmouth, checking the estuary. A lot of Wigeon, Teal and Mallard were present along with a couple of male Red breasted Mergansers. 10 Whooper Swans circled around before returning to their usual fields to feed. 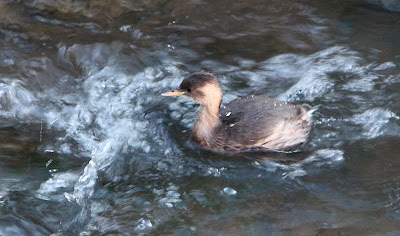 This Little Grebe would have been a right poser for photos under a small footbridge if it had been daylight! Even DSLRs cant cope with rapidly moving subjects in the pre light of dawn.

From here we moved down to Amble Harbour to check out the gulls. Unfortunately there were no new northern arrivals but the regular wintering Mediterranean Gull was in the usual place on the little shore. 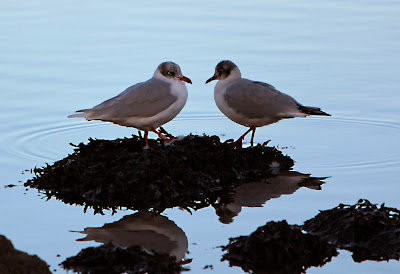 Then we moved back up to Foxton Bends. Despite looking good with lots of standing water, there wasn't much to note.

No proper birding today but still added a few common species to the list - Fulmar, Turnstone, Redshank and Oystercatcher while walking Bunty. 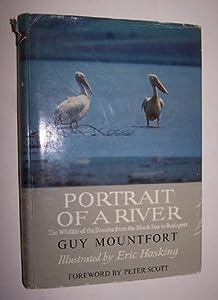 'Portrait of a River' by Guy Mountfort describes an expedition to the River Danube in Bulgaria to record and photograph the wildlife. Not a bad buy for a tenner....The 'crew' or 'posse' or whatever the group was called in the day, included such bird stalwarts as Eric Hosking and James Ferguson Lees. I read a little bit about the trip as a kid when I read Hosking's 'An Eye for a Bird' and I liked their style.

Ages ago Barter' had a copy of 'Portrait of a Desert' about their visit, by special request of the king, to Jordan but I didn't buy it. I should have...

I much prefer reading these old tales of derring -do, when a birding trip to Eastern Europe was a real boundary pushing adventure, rather than looking at the latest gull i.d papers and the like. No wonder I still haven't seen a Caspian Gull in the UK...I will though, one day.
Posted by Stewart at 6:38 pm 2 comments: 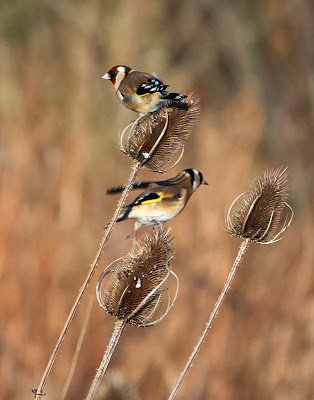 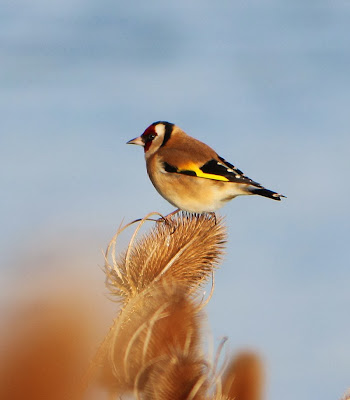 Out and about with JWR today taking a few pics with the new camera. It might be a steep learning curve to get the hang of the settings etc, but I am inspired by the likes of Gary Woodburn and Warren Baker's excellent shots on their blogs so I am expecting to improve sooner or later ( probably much later).

Today, there wasn't much close enough to 'bag' other than these nice Goldfinches on a large patch of teasel. I also bumped into a flock of 30+ Bramblings on a roadside but they lifted up into the tree tops against the light before I could get anywhere near...

Other birds of note today were 10+ Goosander on Branton Pits ( unlike the drake at Morpeth, chips will not get them any closer).

Today is a bit special for me in that it is my birthday, the one where I reach a half century. Where has the time gone? 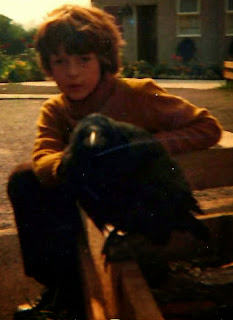 It doesn't seem like 40 odd years since other living beings became my obsession. At this age, above, it was catching butterflies, small mammals in sunken sweet jars and minnows in the river, or looking for birds nests that took up every daylight hour. God knows where I got the Rook from...

So, continuing on a theme, I started my 2014 bird list locally. The first species added was a Tree Sparrow calling outside the bedroom window even before I got up, closely followed by Dunnock and Woodpigeon .
Due to ever deteriorating weather, the days tally ended on a very moderate 29 species, around the garden and village. 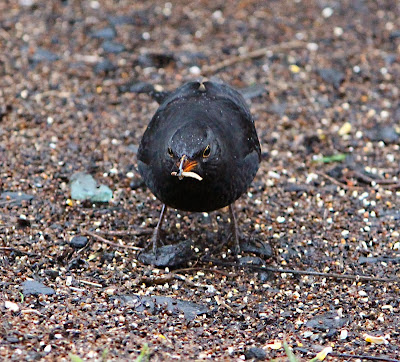 This Blackbird is one of the first photos taken with my new toy, a Canon 700D ( a very unexpected present from my better half). Given a few weeks practise in better light (and with some help from my friends cos I'm clueless) there should be a few more bird shots illustrating the blog to compliment the notes and sketches...