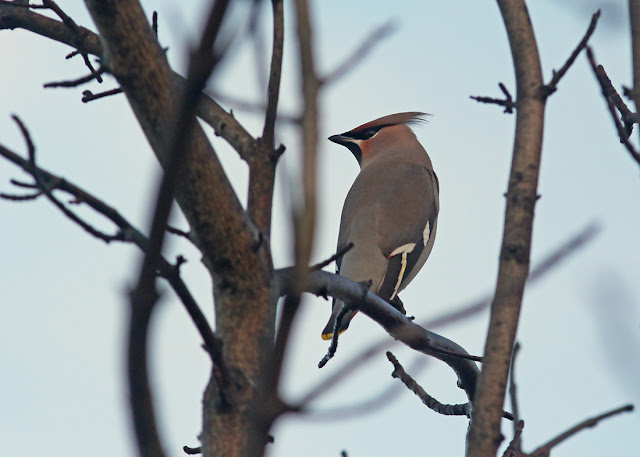 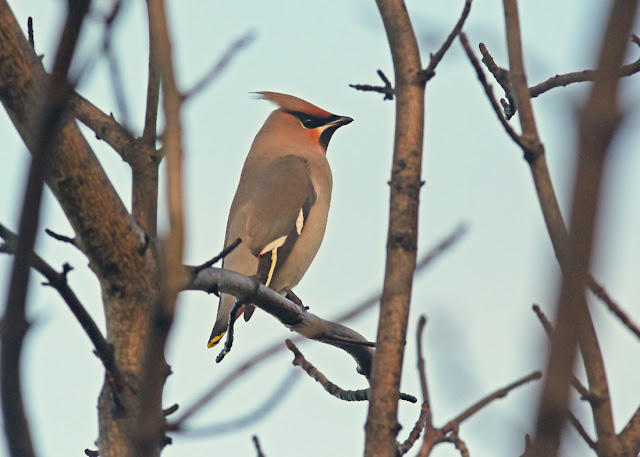 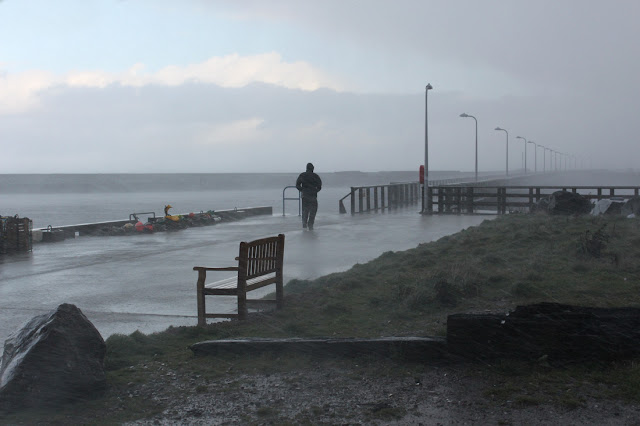 Not much doing this morning or during the weekend on the bird front.

Highlight for me was a nice finch flock along our lane end that contained about 150+ birds, mainly Linnets and Chaffinches but also had 6 Brambling, 2 Lesser Redpoll and a Bullfinch. 30 Siskins fed in alders nearby.

This morning was spent helping Jane get to the Xmas Fair at Howick Hall before popping down to Warkworth for a chat with John. It was mixed weather there with some quite serious stormy spells curtailing any attempts a bird finding ( Above) 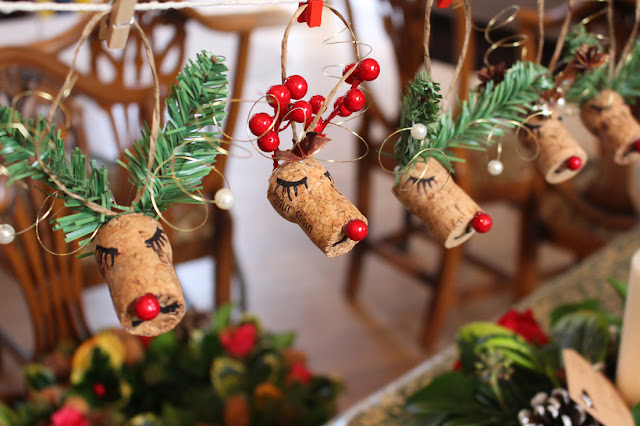 And my only attempt a bird photograph this weekend... 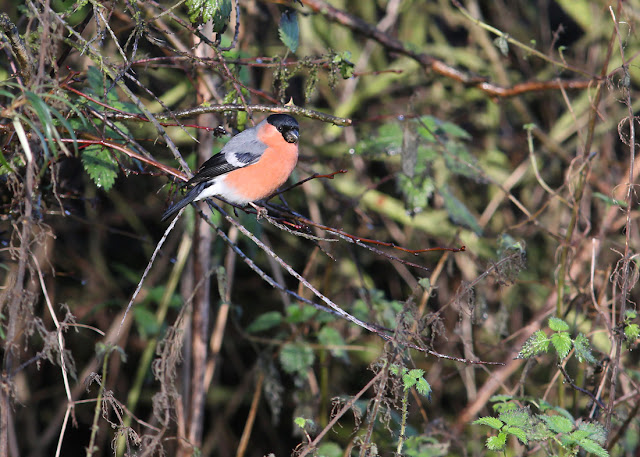 Long time no see. I've been a bit too busy to blog lately but here is a catch up.

Since we last met all manner of things natural have been happening. Starting off a couple of weeks back we were in a late autumn heatwave, on the 10th it was a whopping 18 degrees here, a temp we hardly see in June let alone November!

Thursday 12th I had a day off and managed to get out on the patch for a couple of hours. Actually I'm always on the patch as I live in it, but you know what I mean. Hoping to add to my year list I decided on a sit and wait approach down at the Rumbling Kern where a nice flock of 5 Snow Buntings tinkled south along the cliff edge. Another wait and see was adopted at Craster where a Black throated Diver flew N close in with 3 Red throated Divers for comparison, 2 Bonxie, 9 Common Scoter and 12 Curlew.

On 15th, another mild day I had 3 Red Admirals and 2 Common Wasps on Ivy near the village hall. A Chiffchaff was nearby, set for wintering? While standing with Bunty, 36 Whooper Swans were a magnificent sight as the flew south low over the village.

Another week passes and the 20th was much cooler. A NW breeze seemd to ground some late migrants with 20+ Blackbirds, 10+ Fieldfares, 8+ Redwings and a Goldcrest all along the coast path where yesterday there were none.

As the wind increased to a storm force NNW seabirds began to be reported so I was up early on Saturday gone for a seawatch at Craster.

On the way home a found a dead Short eared Owl on the roadside. Poor thing, newly arrived and quite emaciated.

What a difference a few weeks can make, a heatwave a few weeks ago and snow flurries and ice this weekend. Its all a part of our wonderful seasons...

An impromptu day off work today to take our ageing Chinchilla to the vet to get his teeth looked at. At 10 yrs old, he is getting on a bit, maybe even 'long in the tooth!' So, £39 lighter, I brought him back home none the worse for his ordeal...

Wandering around the village today was generally quiet. A couple of small flocks of Pinkfeet flew S, a Fieldfare was sub-singing on top of the village cherry trees and there is a nice patch of Wood Blewitts are coming out below the village hall pines now... and thats about it really...

That's enough of that.

This morning I met John at Warkworth Top Car Park at 07.30. A stroll around in the half light was quiet with no thrushes or anything in the scrub. Viz migging was almost non existent too, so the morning didn't seem to be going too well. That is until we were chatting about the latest poor customer care from EE Broadband that John has been suffering from( all providers must be the same because BT is absolutely dreadful too when it comes to customer service).

In mid chat, I heard a very distinctive call across the salt marsh in the reed bed - Bearded Tit! Now Bearded Tit is a rare bird in Northumberland mainly because the habitat is very scarce too. My last were at East Chevington a good few years back so this one set the pulse racing.

We scanned the edge of the phrag without luck but the call continued, then all of a sudden John got onto it, a beautiful male sitting out in the open. What a cracking bird to brighten up the gloom. We watched it for a bout 10 minutes as it flew around even venturing across the open and doubling back at one point. A real highlight on this patch this year.


After some tea, we headed down the north side towards the pier. Here a male Snow Bunting flew N low overhead, calling, while well over 600 Golden Plover were on the estuary.

On the way back through the dunes I was pleased to find lots of fungi, including three new species for me -

Dune Waxcap, Black Earth Tongue and Rosy Bonnet. The latter is a woodland species mainly I believe, but some species occur in various old habitats.


As the rain increased by 11.15 we decided to call it a day. I hope we get some nice fine winter days, I really hate this dark stuff...
Posted by Stewart at 4:11 pm 7 comments: 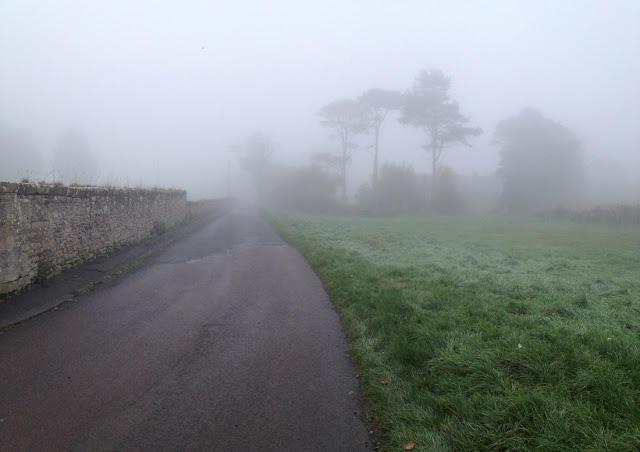 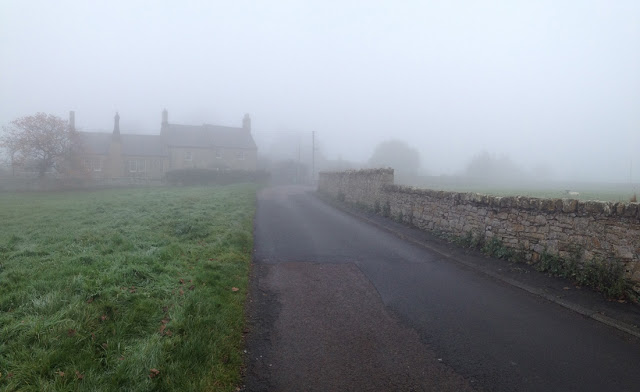 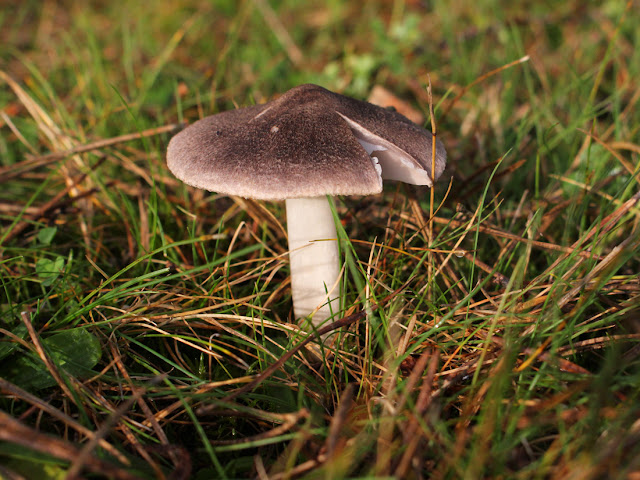 On holiday today, with thick fog on the coast I headed a short way inland to Shepherds Law to check out some waxcap grassland.

There were quite a few out but I still struggle with the identification...

I've never been to this spot before, but read that it was good for grass land fungi so gave it a try. It was excellent. To allow most waxcap species to grow the grass must not have artificial fertilisers for more than 50 years! Is it any wonder they are so rare... 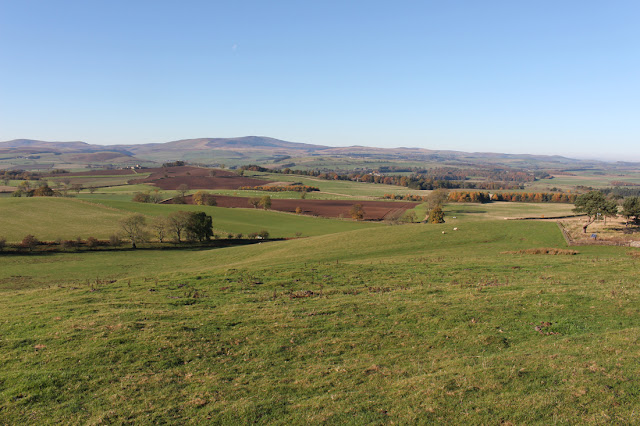 November 1st. What a glorious day it has been. Sunny and warmish all day with only a light breeze. If only our summers were this good!

Out alone today, I took a trip to Craster and walked the heugh up to Dunstanburgh castle on the quest for fungi. Waxcaps to be precise. These lovely small mushrooms glow like jewels in short un treated grasslands, but are not something I am not too familiar with, only having found them rarely. I could have headed inland towards the Cheviots or Simonsides but thought I would stay local to see if I could find some near home.

As the weather was so good, I took a lot of pics, so I make no apologies for making this post very photo heavy. Craster is less than 2 miles from home, and on a day like this there cant be many better places to be in the UK. 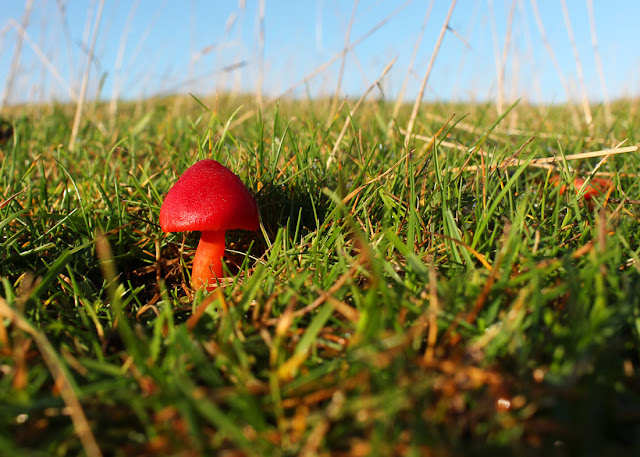 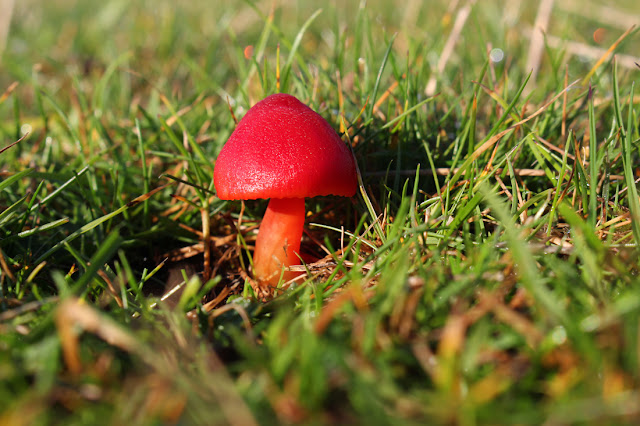 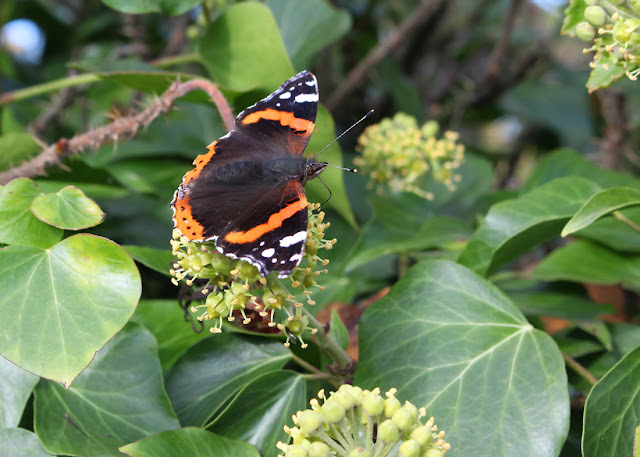 In the warm sunshine the ivy along our lane in Howick was humming with insects including hoverflies, wasps, bees, 5 Red Admirals and a Speckled Wood.
Posted by Stewart at 7:47 pm 3 comments: