I still haven't found away to add a picture to the header above. It looks like its because this template may not be recognised so its time for a change in look but I'm nervous the whole lot will go awry...

Whats been happening lately? The Albatross is still there. It went missing on Friday and Saturday again after about a week of daily presence. I wish it would just go, because I just don't have time to lay a full day aside to go for it.

The mini warm, dry spell is continuing and, though a little cooler, we've not had any rain. We've had to resort to getting the hose onto the garden plants every other night, until there is a ban that is. On 17th the temp was 29.5 degrees, probably the warmest day since we've lived here. The conditions, as mentioned in my last post, have been great for moth trapping. So much so that I've had to take a break for a few nights to get away from processing catches and photographs. Its been taking up quite a bit of time, so I'll leave it til Wednesday. The moths will have a rest too.

There is little happening on the bird front at the minute. A couple of good garden records were had last week with Dunlin calling over in the dark and both Arctic and Sandwich Terns taking inland flights over the village on a few days.

At the weekend we returned home from shopping to be met by a Water Shrew having a right old rummage around the drive. It showed well for a few minutes, constantly active as it made its way along the wall and into a neighbour's old lean-to. There are a few records here now over recent years with this being the 5th individual seen but they are always pleasing to actually see in the open and alive ( two have been casualties). 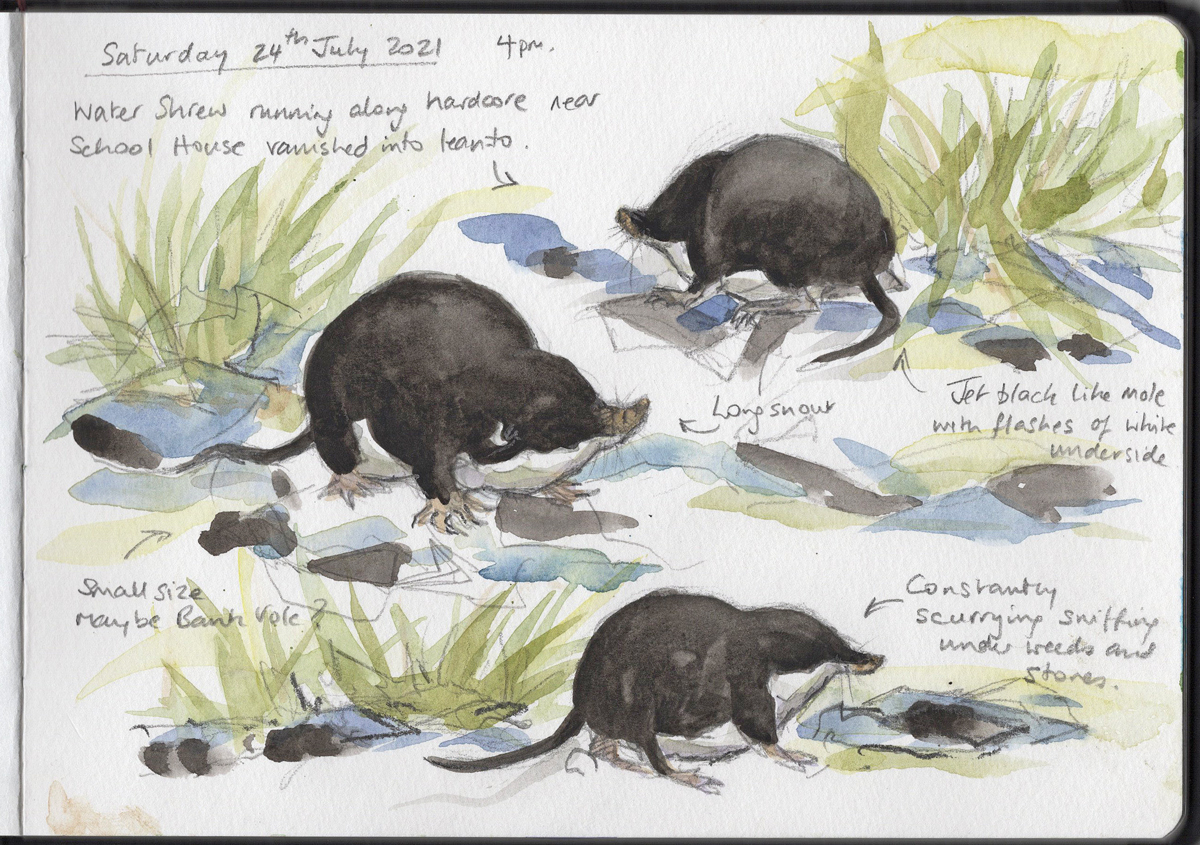 Finally, on Sunday the morning began with a seawatch from Cullernose Point. Despite a calm sea and a very light N breeze we put in an hour with 3 Bonxie, 10 Roseate Terns, 2 Manx Shearwaters, 65 Common Scoter, 13 Teal, 1 Red breasted Merganser, a Whimbrel and a 1st winter Mediterranean Gull all N. Not bad considering.

From there, next stop was Boulmer via Seaton Point where it was very quiet. 4 Bar tailed Godwits included a full summer male, 1 summer plum Grey Plover, a few Roseate Terns in with hundreds of other terns offshore, 1 Little Tern flew S and 2 Manx Shearwaters moved N. Small waders were almost totally absent except for a lone Sanderling. Not one Dunlin was very odd, with none even heard.

Already outside there is a sense that seasons are on the change ...

Stewart, I feel your pain mate. I too had a real battle with "new blogger" when attempting to replace my header image. If it were not for the assistance of one of the computer guys from work I'd probably have given up blogging! I'm sure that there is someone out there who can give you the right advice to sort out this glitch. That Water Shrew is a nice garden record, we only get the Common version down here. Hoping all is well - Dyl

Hi Dyl, at least you have given hope that it can be fixed. I cant for the life of me see how to do it though. I wont give up, I might change the look, but I'll plod on...cheers.

We get three Shrews in the garden, Water, Common and Pygmy. Mind Ive only ever seen Pygmy dead as a cat kill!

Hope you are adjusting to retirement, Im sure it will all come good, you will wonder how you ever had time to work...