Aren't contentious birds a pain. This week a gull at North Shields Fish Quay has split opinion even between world renowned experts. It is either a Yellow-legged Gull or a Northern Herring Gull of the form 'ommisus'. It's not that I don't have the interest but I do have the experience to say that some birds will defy explanation.  Plain and simple. The gull will always be a split decision.

Little did I know that I would get my own bone of contention this morning along at Boulmer.

Myself and John walked up to Longhoughton Steel for the usual stand and stare that can be so productive here. It was cold and grey with a biting SE wind. We soon totalled up 11 Red throated Divers, 2 Goldeneye and a nice drake Goosander all south.

Quite a few auks were dotting around. Flying north and south, some on the sea. They don't really get much of a look as the majority are just 'auk sp' Some close ones can be seen to be winter plumaged Guillemots and an odd Razorbill just over the breakers.

It was at this point in the lumpy sea a black and white dot caught my attention. An auk yes, but in summer plumage? I commented to John that there was a very black and white auk out there that appeared to be in breeding dress, but it was only giving peek-a-boo views over wave troughs and I soon lost it from view.

About half an hour later we were considering heading back to the car for tea when John called that he had the black headed auk in flight moving south. Before I tell the tale I must show this Tweet from me a week ago - 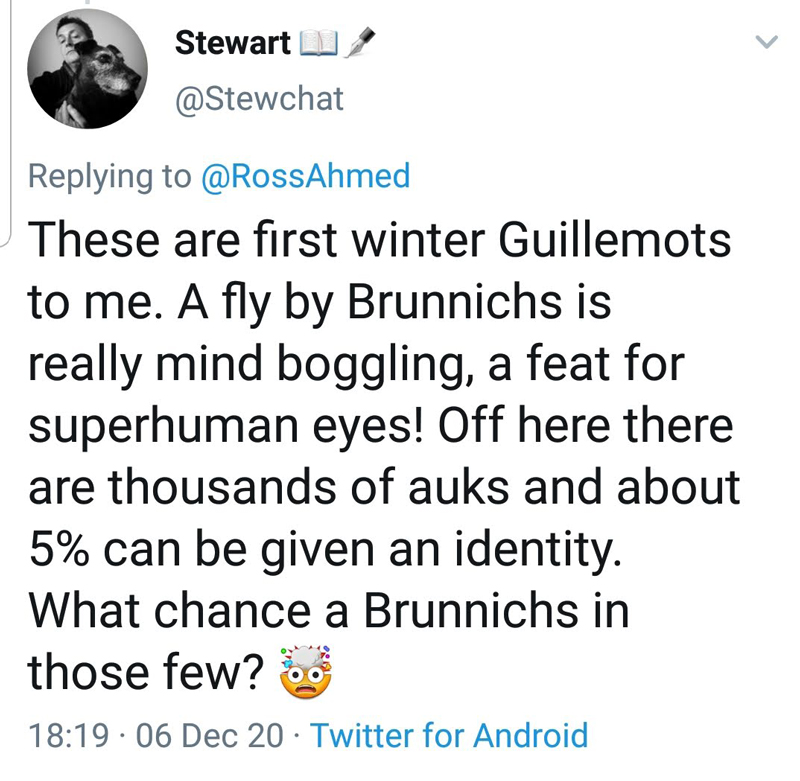 This was in response to some photos posted last weekend. I stand by that. They were Common Guillemots.

Now that is out of the way, back to this morning. I immediately got on the bird as it came in and flew with a winter plumaged Guillemot south at breaker range. At Longhoughton Steel, the rock formation makes this still a few hundred metres out but it was a decent view in the scope.

For all the world, this bird looked like a Brunnich's Guillemot and that's saying something coming from a Brunnich's-sceptic like me!

Giving a great comparison side by side with a Guillemot we followed their progress for a full NE to SE sweep of the view until gone. Compared to the Guillemot, it was shorter, more stocky. A completely oval melon with wings.

What on earth can we do with that. We didn't take cameras as it was dull and there wasn't thought to be anything to photograph so it was down to notes. I rattled off a scribbled field note and updated at home.

Later on, we had a look along to Seaton Point about a mile south of our first sighting. We counted 13 Purple Sandpipers, 8 Grey Plover and 15 Knot over flown by a Kingfisher on a rising tide, when John picked out our bird again. On the sea, like my first view, up and down behind beakers and waves only giving tantalising glimpses of a very black and white, black headed auk with a bright white wing bar. It showed nothing new to add to the notes. Then we lost it. It seemed to be swimming and diving southward but after about 10 mins of snippets that was it, lost in the ever more rough sea.

We wondered if this could be the bird seen by Daniel Langston a few weeks back? Who knows.

I just wonder, as I always do in these cases, just what would that bird look like if you could walk up and view it from 10 mtrs? Would the results remain the same?

Another hoodwink that got away....