Now that we are back at work after the busy Christmas holidays, local wildlife time is resitricted again due to the length of daylight hours. It is total darkness on the morning terrier perambulation and its even darker when I come in at night! One morning this week I was a little bit later away and caught up with Brambling and Mistle Thrush in the village as patch list additions for 2019.

This weekend has been a mix of dull to bright and calm to breezy but dry throughout. Often mild too. Snowdrops are now bursting out in the village wood and I saw a few Winter Aconites open at Denwick last weekend. Its all moving in the right direction. Looking forward to light nights is a bit like wishing life away, and I dont mind winter if only I had more time at home to enjoy it!

Today I met with John and we stayed quite local visiting the Coquet Estuary, Amble Harbour and Seaton Point, Boulmer. The fist two were very quiet with nothing going into the notebook but, as usual, Boulmer always has something to look at.

As we walked along the shore from Seaton Point, an adult male Peregrine strafed the tideline seeming revelling in the strong wind and headed south to Foxton. We later saw his return sortie across Boulmer Haven lifting all the shorebirds and gulls on his way.

Sheltered on the east facing beach, a lot of weed held half a dozen Rock Pipits of both petrosus and littoralis races, 1 Meadow Pipit and the wintering Water Pipit. A male Stonechat was on the dune edge as we passed. 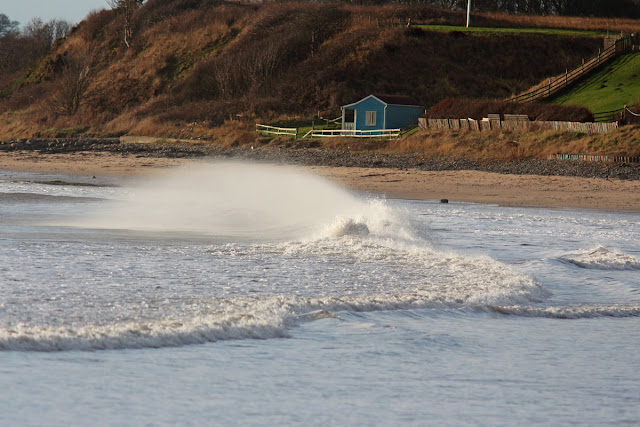 As we rounded Seaton Point, numbers of people increased causing some disturbance to the birds. Fortunately the tide was dropping back quickly so the birds will have been able to feed largely out of reach of all but the most determined of anglers on the rock edges.

We had 18+ Bar-tailed Godwit, 13+ Ringed Plover, 80+ Dunlin, 3 Purple Sandpipers and 15 Sanderling clamering for morsels in the waves. 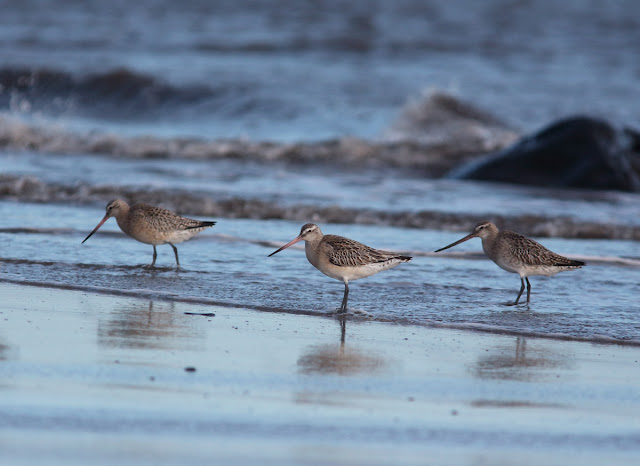 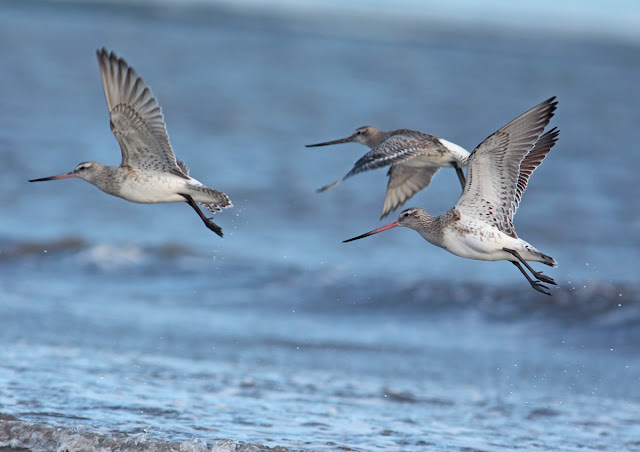 Back home this afternoon I took a walk down to the pond field with Peggy to see if the wind had shuffled some wildfowl onto the water. I didnt have high hopes so left the camera at home. A decision I regretted later when I found a nice drake Gadwall on the pool feeding quite close in without concern. Gadwall is a scarce bird for the patch only being recorded in 6 out of the last 10 years and these are only singles usually in late summer or early autumn.

I might have a few days off work into February just to tide over until the longer days of March....
Posted by Stewart at 8:18 pm

You're not doing too bad yourself! I'm going to enjoy our little competition...