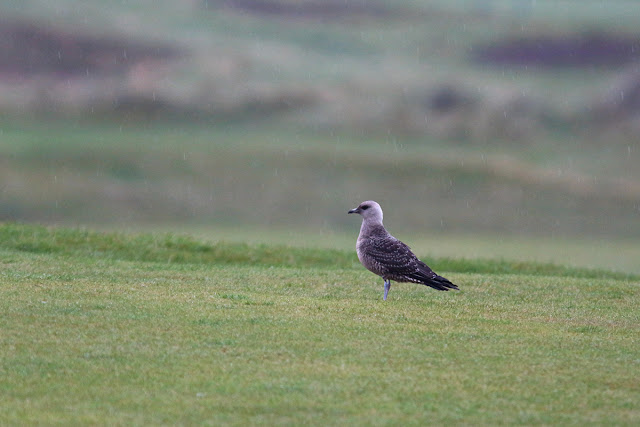 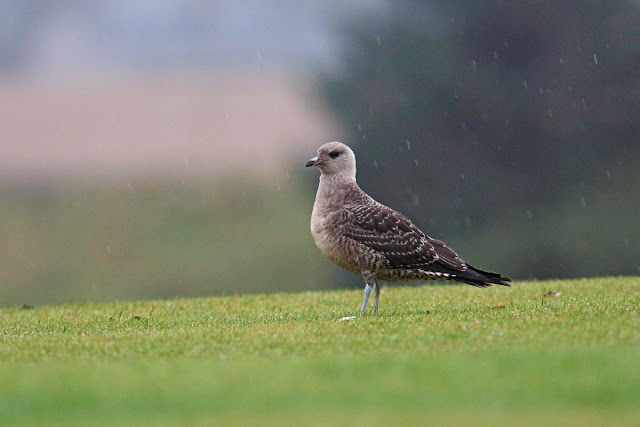 In a solid overcast drizzling dawn, John and myself headed up to Goswick to call in on the juvenile Long-tailed Skua that has frequented the golf course there for the last few days.

At first it wouldn't play ball, or should I say golf, and remained elusive hidden away at the northern most extremity of the fairways. After a little stalking and a lot of a soaking we managed decent views of this usually pelagic pirate.

Clearly we weren't going to do as well as our peers on the photographic front, so we headed back to the car to dry and have refreshments.

Next stop, Budle Bay. From the laybye, viewing here is always a chore with loads of birds around but most of them a long way off. Still we manged a few Grey Plover, 4 Little Egret and a load of Pink footed Geese before we cut or losses and headed around to Stag Rocks for better views of last weeks nemesis the White winged Black Tern.

At Stag, all was quiet so we walked out to Budle Point. Things were much better here with a nice juv Black Tern, a juv Roseate Tern, maybe 20 Arctic, Common and Sandwich Terns, an Arctic Skua,  a Kingfisher, 60+ Pale and Dark bellied Brent Geese, 300+ Pink footed Geese and a Red breasted Merganser. Unfortunately despite spending over an hour looking there was no sign of the aforementioned WWBT so we called it a day and headed back to the car.

In the laybye here we bumped into bird artist extraordinaire, Darren Woodhead and his young son scanning the sea.After exchanging pleasantries we were about to leave when the lad shouted and waved. The kid had just found the White winged Black Tern off the lighthouse! Thats what 10 year old eyes can do for you...

After som initially confusing directions we all managed to see the bird well before it danced its way south towards Bamburgh Beach. An educational bird.

Our final stop was to be a quick scan at Monk's House Pool ( of Ennion fame). Here a juv Little Stint and 4 Black tailed Godwits were the highlight.

Not a bad few hours out with 6 species of tern, you could forget it is October already!
Posted by Stewart at 8:06 pm

Skuas reported over Notts lately, which seems weird to me!