About 35 years ago, I first read Richard Millington's book 'A Twitcher's Diary'. It was a diary of a twitchers exploits over the year 1980. Until then, rare birds were just a thing of rumour to me, I had never seen one and wouldn't have known where to look.

On reading his book, I wondered how it was possible to see so many exotic species that, to me, were just pictures in a field guide, yet he was seeing them on a daily basis. Of course, now I know how he did it, but not then.

I would pore over his illustrations with envy, birds like Belted Kingfisher, Pied billed Grebe and Ivory Gull were fantastic creatures. Little did I know that all of those and more would be on my British List 35 years later.

However, one illustration stands out. On the cover is a Scops Owl that spent the summer of 1980 in the village of Dummer, Hants, then the first UK twitchable record. Since then, a few have turned up, but all are on either the south coast or the Northern isles way too far for me to access. Today, that was about to change.... 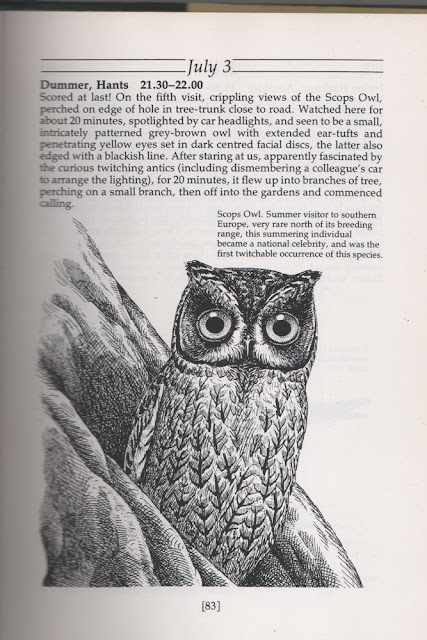 Early this morning a young birder called Tom Middleton was birding a small scrub filled gully near the sea at Sunderland called Ryehope Dene. He saw what he thought was a Yellow browed Warbler fly into a large Elder bush and went to investigate. He raised his bins and saw a movement, but not the expected stripy sibe he was looking for, no, one of the branches moved around and turned out to be an owl, a small one at that! Tom could hardly believe it, he had found a tiny Scops Owl all the way from southern and eastern Europe.

News soon filtered out via social media and people were on the move. Luckily, again, the bird was in the open, on show, in a location where people could not get too close to flush it, but it could be seen well from a footpath only a few yards away. 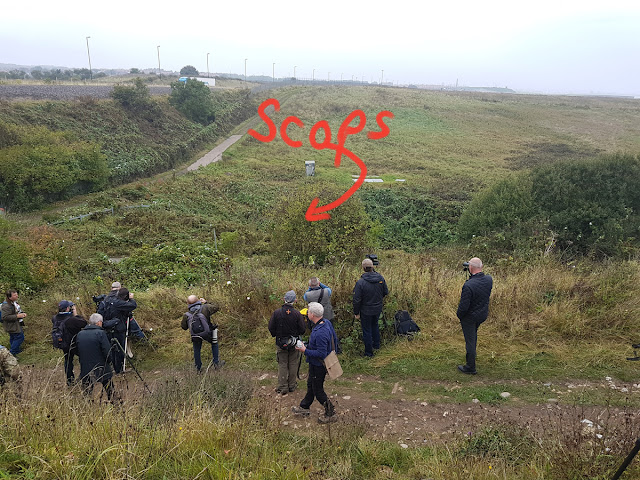 I was in the office at work, on a half day with commitments at home 25 miles in the opposite direction at 1pm. I had no birding gear with me and was dressed in office clothes. Still, where there's a will, there's a way and I reasoned that some kind birder would let me see through his scope. As it happened, there was no need, ADMc came with me and I used his gear.

We arrived at Ryehope at 11.15am and stayed for half an hour before I needed to get away, but what a bird. We had scope filling views as it preened and stared those large pale cats eyes at us, quite unconcerned. It was fantastic and will not be bettered this year that's for sure.

So, if you think about the odds of one bird, landing in one bush where a birder is looking, and then it stays in the open for people to see well, luck was certainly on Tom's side today....and ours! 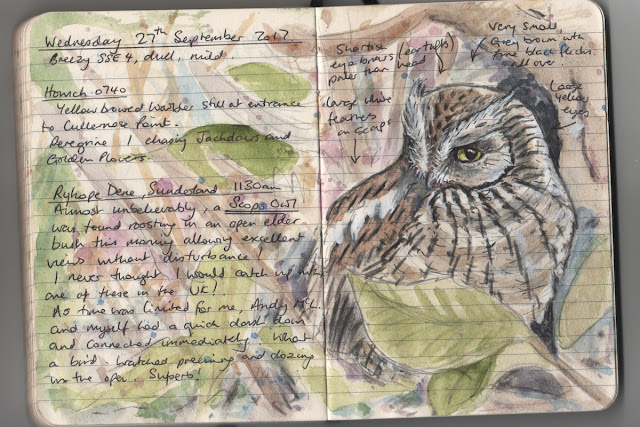 I saw that Dummer bird Stewart, but not views like yours. My abiding memory of my two trips to see it was of standing in the dusk as it called from a lone tree. Fantastic.

Nice one Stewart. As i've been known to say quite a lot these days "Always expecct the unexpected"

Cracking bird, I have been in Majorca twice and it's still not on my list!!

Given the various coincidences required for the Scops to be spotted and reported, it really does make one wonder how many more exciting birds go completely unnoticed - even in relatively well-observed areas - due to location, timing or merely no one recognizing them for what they are!

Derek - Quite common in Spain, we had them on hotel roffs in Jaca, Pyrenees.