Not Crossbill or Greenish Warbler, no, a tale of two Barred Warblers that's all. Calm down.

On Friday I finally made it along to have a look for the Barred Warbler found by Alan Priest on the Newbiggin Ash Lagoon banks. Earlier, Hector Galley had it right out in the open sunning itself, but by the time I arrived it had gone to ground. I stood for an hour seeing Dunnocks, Robins and Wrens by no lumbering sylvia. I decided to call it a rap, and go back to work when an overly excited Blackbird flushed another bird up into a small whitebeam bush - it was the Barred.

It showed well, albeit quite distantly for a passerine but I did get decent scope views for a few minutes before it dropped back to cover. I'll come back on Sunday with John, I mused....

Today we began with a dawn seawatch from the Church Point at Newbiggin. It was generally quiet but there was a good movement of Barnacle Geese in smallish skeins that ended up with 700 birds into the notebook. A Bonxie, 3 Arctic Skuas and 10 Red throated Divers padded it out a bit, but it was slow so we headed across to check out the Barred again.

It was an ideal flat calm, overcast, quiet morning. Bramblings were arriving overhead and we had some decent viz-migging with 33 Tree Sparrows, 10+ Skylarks, a good number of alba wagtails and several Meadow Pipits but try as we might there was no Barred Warbler. I managed a hopeless glimpse of a birds arse end dropping off a low whitebeam that was likely it, but it didn't resurface.

So it was time for a cuppa and where else was there to go other than to look for another Barred Warbler, this time found by Iain Robson at Druridge.

A sizeable crowd had gathered around a large elder bush and waited. Staying cool, we had tea and biscuits.

Soon the call went up, the bird had been seen. Flasks were stowed and dregs tipped. As we made our way along, the crowd was looking at one side of the bush so we waited at the other end. As soon as we stopped, a lovely ,dove grey, Barred Warbler popped out to snatch some elderberries. Then promptly vanished to be replaced by a Garden Warbler!

Anyway, with a little patience, everyone finally managed good views of the Barred, as it fed on sloes and elderberries with 2+ Garden Warblers. It made those, look like little chiffchaffs such was its bulk.

We waited to get some pictures but the results speak for themselves, and it was all too soon time for home... 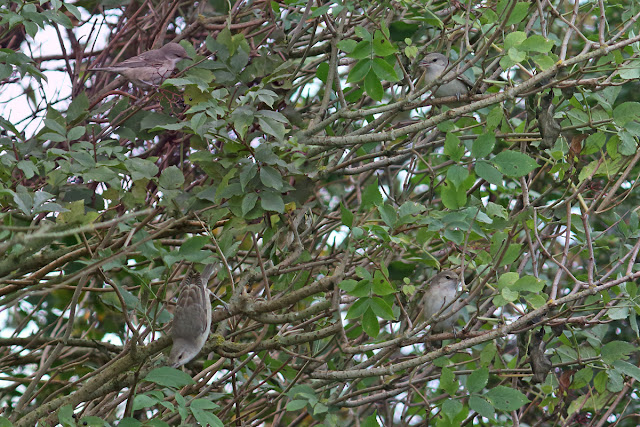